A DarkeStorme Scenario for Two Players by Anonymous Bosch 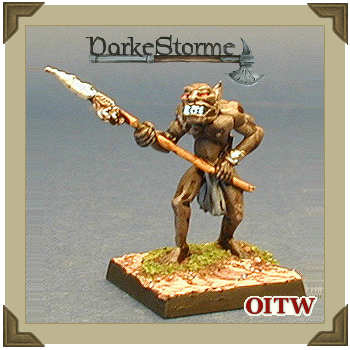 A band of young Yellow Hand Orcs have to prove themselves by counting coup against a band of Dwarves who don't quite know what to make of it.

Dedicated to the memory of Jayne and all our fellow gamers who are no longer here to roll the dice with us.

A deck of poker cards is used in this scenario to resolve situations that “bend” the rules as well as to resolve the Orcs attempts to count coup. Counting coup in this game involves making a non-lethal melee attack on an opponent and then getting away, ideally without being injured. It is very loosely based on the customs of North American natives living in the northwest plains during the 19th century.

Wearing more bandages than clothes, a pair of dusty Dwarfs hobbled towards us. One was using crude crutches made from branches. As they got closer, I recognized them. I had last seen the pair two weeks ago in the tavern, where they and a group of younger Dwarfs were boasting about how rich they would be. They were going to pan for gold from the Black Tooth River which lies deep within the territory of Yellow Hand Orcs Tribe.

“Heiner! Rogar! What happened to you? Where are the others?” I asked.

“Bushwacked! We were ambushed by a horde of Yellow Hand Orcs yesterday evening. Only Fatty and I survived,” answered Heiner. “At last we drove them off before they could loot the bodies or steal our gold.”

“It was a right strange battle,” Rogar added. “Usually the Orcs are mainly interested in plunder. But these Orcs...”

“Thar, thar, shhh,” interrupted Heiner. “Best not even think about what those crazy Orcs did, much less talk about it.”

Meanwhile miles away and deep in the woods, a band of young Yellow Hand Orcs were celebrating. They had recently ambushed a group of Dwarfs along the bank of the Black Tooth River. Many Orc youths had become Warriors in that fight, and now they were recounting for their Tribe all the ways they had counted Coup. This was indeed a great victory for the Yellow Hand Tribe.

The Dwarfs had heard stories from an old prospector of a place along the Black Tooth River where there is much gold that can be easily panned from the water. This site is said to be in a place where the river is merely a wide stream that flows through a circle of standing stones. Unfortunately, the area lies deep within tribal orc lands, and the prospector was too old to attempt the journey.

The Dwarf band found the site, and the prospector's tale was somewhat true. They found gold nuggets while panning the stream, but not as much as the story suggested. After a week of panning, the Dwarfs were ready to pack up and return home with the the gold they found. They hoped to return later and search for the mother lode that these nuggets came from.

Suddenly the Dwarfs heard the war whoops of tribal Orcs coming from the nearby woods. The Dwarfs had been ambushed, and they would have to drive off the Orcs if they want to live long enough to spend their gold. Perhaps more importantly, they needed to beat the Orcs convincingly so that the Dwarfs will not be attacked again when they return to search for gold.

The ambushing Orcs are a band of youths who are old enough to become Warriors. Now the Orcs must prove that they are brave enough. One way to demonstrate this courage is to count coup against an enemy by striking him in melee in a way that will embarrass him, and then escape the engagement, hopefully unharmed. 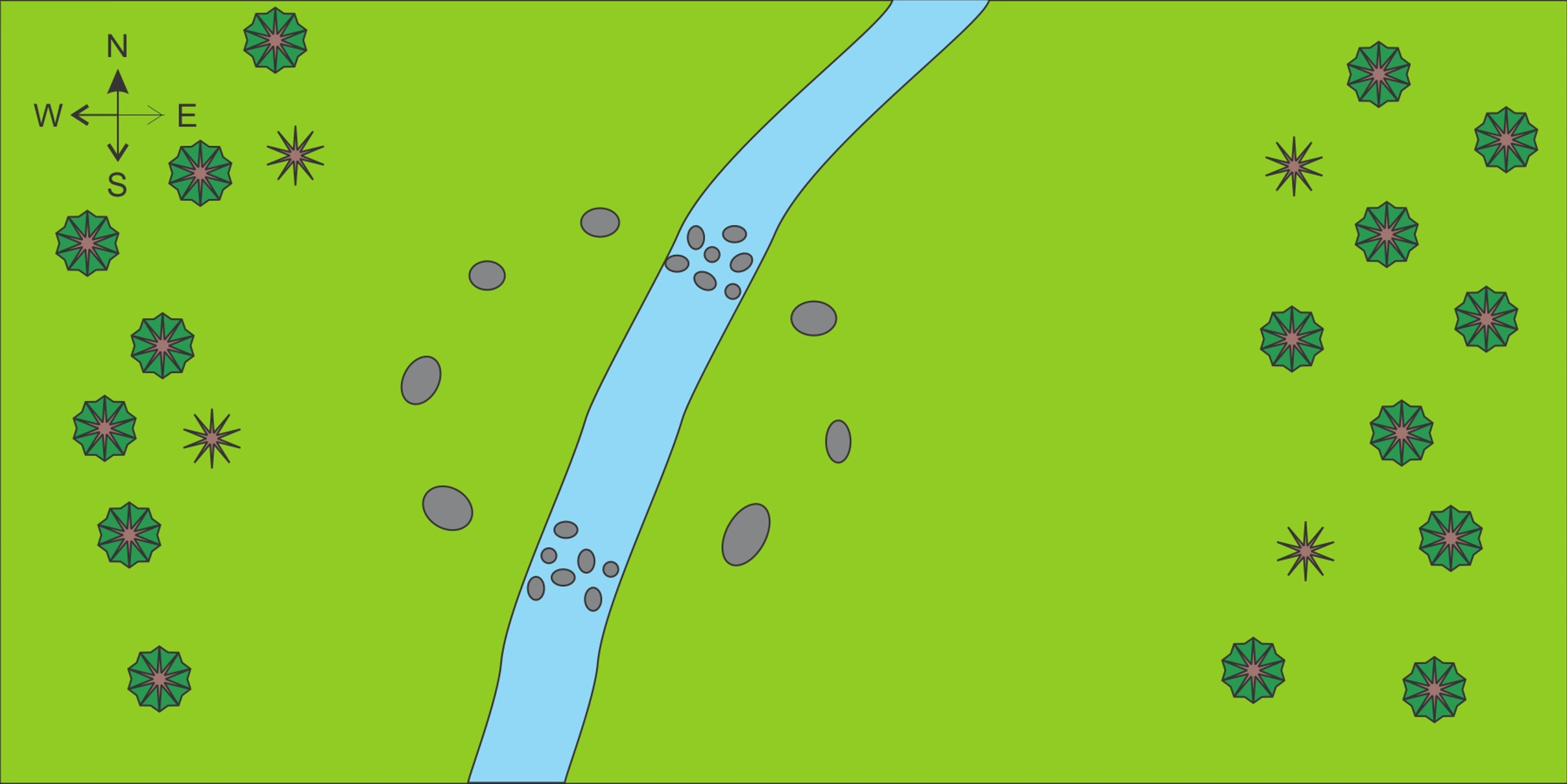 This scenario uses an approximately 6 foot (East to West) by 3 foot (North to South) table. A shallow stream, or gully if you prefer, about 4 to 6 inches wide runs North to South through the middle of the table. It is shallow and counts as rough terrain, doubling the cost of movement through it. The stream or gully should have two crossings, about 4 inches wide, as indicated on the map. Models can move over these crossings at normal terrain cost. There should be circle of tall stones near the middle of the table. This circle is bisected by the stream or gully. Leave wide gaps, at least three inches, between the stones. The stones should be both tall and wide enough to block any lines of sight that pass through them. The eastern and western sides should have a scattering of trees within 12 inches of the edge. The trees provide cover, but they do not hinder movement.

Refer to the map for this description. The Dwarfs deploy first inside or within 4 inches of the standing stones. Then the Orcs deploy on either the western or the eastern wooded area, whichever the Orc player chooses. The Orc play may deploy up to two Orcs in the woods on the opposite side of the table.

Select eight Dwarf models to represent Heiner and his warband. Pick the favorites in your collection, but no more than four should have missile weapons.

Any group of eight Orc models could be used to represent this band of youths from the Yellow Hand Orc tribe. No more that four should have missile weapons.

If you need more models, whether Dwarf or Orc, 28mm or 15mm, please consider checking the wide selections available as the Alternative-Armies.com website. Creating a warband whose stats match your figures is quick and easy in DarkeStorme.

The Hand of Fate: Shuffle a deck of poker cards and place them face down. At the start of each new turn, each player should discard face down any cards he might have from the previous turn, and then draw a hand of four cards without revealing them. During the game the cards can be played for the following effects.

1) When an opponent has the initiative and is about to activate a model, you may play a card to activate one of your models first. You activate one of your models and perform his actions, and then place a marker by that model. Then your opponent finishes activating the rest of his models. On your next turn you cannot activate the model with the marker (because he already took his actions). Instead, when it is his turn, remove the marker. Your opponent can, if he wishes, play a higher value card to cancel yours. The cards are discarded after use.

2) When you activate a model, you can reveal a card to gain an extra free action for that model. You can use the action normally, but you can also use it to gain an extra movement action even if the rules would normally not let you move again. Your opponent can, if he wishes, play a higher value card to cancel yours. The cards are discarded after use.

3) If an activated Orc is in base to base contact with a Dwarf, the Orc player can play a card to Count Coup. This is a free action, and it is the only way to count coup in this scenario. The orc proves his courage by grabbing the Dwarf's beard and giving it a mighty yank (or kicks him in his butt if the Dwarf is not beardy enough). The Dwarf suffers no lasting damage, except to his pride. Your opponent can, if he wishes, play a higher value card to cancel yours. If that happens, then the Dwarf dodges in time and avoids the Orc's attack. The cards are discarded after use.

4) As mentioned above, when your opponent plays a card to activate a model early, or to get a free action, or to count coup, you can choose to play a card from your hand to negate his attempt. The choice is yours; you are never forced to play a card to block an action. You might want to save the card to use later. Remember that unused cards discarded at the end of turn. To block an action, you need to play a card with a higher value than the one you opponent played. The card values from highest to lowest are Joker, A, K, Q, Jack, 10, 9, …. 3, 2. Color and suit do not matter when trying to play a higher value card.

The game lasts 10 turns. The Dwarf player wins if at least one Dwarf survives at the end of the game, and the number of Orc casualties outnumbers those lost by the Dwarfs. The Orcs win if at least three Orcs count coup and then exit the board on either the western or eastern edge by the end of the game. Because Orc and Dwarf cultures have very different values, it is quite possible for both sides to win or to lose.

The above scenario is an Orcs in the Webbe original and was first published on December 10th 2018 as part of its 2018 Advent Calendar.