A Flintloque Setting and Scenario by Danny O'Hara 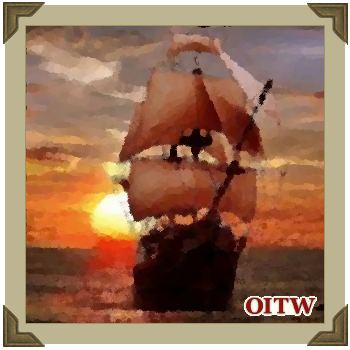 Being the true tale of BANDITRY, INSURRECTION and the infamous PIPEWEED!
(Recorded for posterity by Mr. Damnall O'Hairy, itinerant Bog-Orc).

The following is a true recounting of recent events in the WINDY ISLES, involving slave insurrection, Elven interference, glorious victories and strange Halfling cults. It being suggested that such frippery may be of some passing interest to players of the most excellent and much lauded FLINTLOQUE game, perchance.

The Setting: The Windy Isles

On the sea route from Albion to the Dark Continent lie the Windy Isles, so-called because of the incessant trade winds, through which virtually all shipping bound for those mysterious lands must pass. This gives the islands a value much more than any intrinsic worth, and they have been sporadically inhabited by various races. On all the major islands 'plantations' are maintained, growing various crops which are then distilled into devilish liquors. These are run by settlers (elf, orc and even dwarf), using slave labour (mainly halfling and goblin). At times slaves escape into the wilds and form wandering gangs who prey on isolated settlements, mule trains, etc.

The islands have seen many changes since Mordred's ascension. At that point the islands were predominantly owned by Dark Elves, with others held by Dwarves, Orcs or High Elves. On the rise of the Ferach, Mordred proclaimed that all the slaves were free. This caused widespread slave revolts, and High Elf troops moved into many islands to 'assist' these rebels. However, once ensconced Mordred retracted the slaves' freedom and made the majority of the islands into High Elf colonies with the plantations in operation as previously. But a few ex-slaves, notably the Halfling Bilbo Marley, have refused to accept this turn of affairs.

'Hobbiton Me Come From'

Born in Hobbiton, Jamcakey, some eighteen years before Mordred's seizure of power, Bilbo Nesta Marley is the son of a slave-girl by an H.E.V.C. (Halfling) soldier, and worked as a plantation slave until Mordred's calculated proclaimation of slave emancipation. An early and enthusiastic supporter of the freedom movement, he joined the forces of Drogo Dekker (much against his mother's wishes), and fought in the ill-fated slave revolt of Jamcakey.

Fleeing the Orcish response, he sought refuge in the Elf-dominated islands, but was sorely disappointed by the Elf treachery. Now a homeless outlaw, he set out with a group of hardened, desperate comrades to spread revolt. Unsure whether he hated Orc or Elf most, he quickly realised that the High Elves presented the most immediate threat - thus the rebels came to a loose alliance with the forces of Albion.

While wandering the gang came to be known as the 'wailers' from their war cries, and they have come into contact with the scattered remnants of the indigenous goblin tribes. From the famous tribal warrior 'Ganja' they learned of the 'pipe-weed' which inspires some Goblin shamen. Whilst Halfling slave beliefs tend to include the old hobbit folksy lore, Goblin shamanism, Orc and Elf philosophies, together with local slave ideals, there has been little direction to these. However, under the influence of pipe-weed Bilbo saw a vision of the great, semi-mythical Halfling leader 'Ras Gaffer', and the whole melting pot of Halfling religion crystalised into the principles of 'Rasgafferianism'. Now both revolutionary and prophet, Bilbo set out on his insane mission - to ignite the Windy Isles into an inferno of righteous, Rasgafferian awareness, which will sweep away the colonial powers.

Bilbo and the Wailers have kidnapped young Gloriette Glorfindelle, daughter of the High Elf governor of Makemshriek, together with her slave-girl Lobelia (a female halfling), Having slipped away from Makemshriek in their canoes, they have reached the sparsely inhabited island of Hatey. A message has been sent to the Orcs, and an Orcish ship is due to collect the hostages as soon as possible. Meanwhile the rebels are hiding in the jungle of Hatey with their valuable cargo. But they have spotted a ship closing on their position, and it is flying the Ferach tricoleur!

From the crows' nest of the Laiquendé, a keen eyed Ferach matelot has spotted smoke from an area of jungle on the coast of Hatey. Perhaps they have caught up with the disgusting halfling rebels who stole young Gloriette Glorfindelle from her father, Governor Louis Glorfindelle. Thus Sergent DuBois and his marines have quickly landed by longboat, and are setting off into the jungle to locate the possible rebels and rescue the elfette. The Governor would be very well disposed to his daughter's rescuers!

Meanwhile, approaching at a more leisurely pace is HMS* Saucy Snaga, an Orc sloop under the command of Lt. Flassz-Orc, hero of the Goblin Wars and arch-rival of the low-born Sharke.

The game is set on the island of Hatey, which is basically a tropical island with fairly dense vegetation. As I also run occassional pirate games, I already possessed a suitable island, but you could run the game with one table edge as "sea", or even set the whole action totally inland and avoid using boats altogether.

Either way, the halflings are set up using 2" square cards, preferably green-coloured. One such card is marked as the real rebel group, while there are 5 other dummy cards. The halfling player sets up and moves all these cards, using halfling movement rates. There is a small encampment (grass huts, etc.) in a clearing, but otherwise all is jungle with very limited visibility.

The Elves enter from the shore-line, and must obviously locate the real rebels and hostages. They should try and determine the nature of each card they encounter by either directly contacting it, or attempting to "spot". As a bit of light "umpire relief", I designated two of the cards (unknown to their halfling controller) as encounters with giant snakes (which really spoil an Elf's day!) or similar. (In our first game, the Elf player lost his cool after the second of these and started using the tried and tested "Nam" tactic of shooting first and determining card contents later. This resulted in the death of Gloriette and Lobelia without damage to any of the halfling party!).

At some point after the Elves move into the bush, Flassz and his Orc marines should arrive, either by boat (moving at 5cm per rowing figure) or from another table edge. (Longboats are surprisingly easy to make from card, balsa or similar). Their aim is to collect the hostages and get away, not to chase Elves through jungles!

The Wailers count as a Guerrilla unit. All the halflings are armed with short swords or short spears. I used a mixture of converted fantasy and historical 25mm figures for this group.

The Elves count as a regular unit. I used the voltiguers from the original box-set for these.

The Orcs count as a Regular unit. I used the Albion Marines set for these, with a converted "Harpy" for the sergeant and a converted "Sharke" for Flassz.

** Lt. Flassz-Orc, despite his fearsome reputation, is actually a true coward and will never willingly engage in combat. He will tend to stand at the back and accuse all his men of cowardice. Best to give this command to a good role-player!

Dreadloque has been part of Orcs in the Webbe since its creation back in 2004, to find out more about it and it's sequels click on the  maroon link  below and to the left.