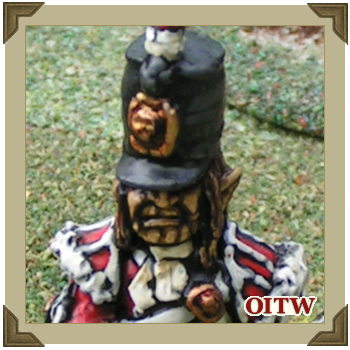 Dear reader, it gives me no pleasure, no pleasure at all, to besmirch the honourable name and character of our ‘potty-mouthed’ Orc sergeant, but it must be said, that while Freddy is a true soldier's soldier and a fine fellow to have beside you in a tight spot, there can be few who would trust him with anything more than their last brass farthing. Nay even that would be lost to our Freddy, more than likely in a crooked game of cards!

So I understand your disbelief when I say that Wogan, Olde Nosey’s best and most trusted spymaster, has chosen Freddy and his posse for a mission to recover gold. Not fool’s gold, oh no, actual gold. The sort that countries go to war over, that Orcs, Elves and Dwarves die for. The sort that mere mortals only dream of. This is the story of how Wogan chose Sergeant Foul-Mouth Freddy to recover the Kyngs Shilling.

It is Spring in Urop, the Grande Army has not been paid for five whole weeks and ‘Olde Nosey’ knows that an unpaid soldier is only one short step, one rabble-rousers shout away from complete anarchy. Catalucian Guerrillas have been smuggling money to the Albion Orcs, money lent by international bankers to finance the war against Mordred. However, the Dark Elf Guerrillas carrying the pay have not been able to smuggle it through the Ferach lines and so they have hidden the gold in an abandoned and ruined inn. They then split up and continued to the main Orc lines, reporting the situation directly to the spymaster Wogan, the head of Nosey’s special operations.

Wogan has little choice. The gold is sorely needed – there can be no failure. Who can he send on such a delicate and dangerous mission? Sharke is currently way down South, Flassz-Orc is manning the siege at Badjobz, the Bombardier is supporting Nosey’s most recent attack on Noportoe, dear uncle Rogipoos is helping with some belly-dancing courses and even Giglamps is busy duelling. So who is left?

Yes, dear reader you have it in one. Wogan has not gone completely mad, he simply has no choice. Freddy it is. Now what can Wogan afford to tell our flea-ridden Orc, what incentive can he offer that would have any effect on the dubious scruples of our favourite anti-hero?
Money? No that would just make things worse.

Gutrot Brandy? No, that would definitely make things worse.

Women, is that enough of an incentive? Maybe?

No, Wogan has to think like a right bast**d. Be even more sneaky than usual.

Wogan summoned Freddy to his tent. And just to make things awkward he offered him a glass of his best Brandy (you would have thought that Wogan would have learnt his lesson by now!) As Freddy sat, Wogan smiled.

Oh S**t, thought Freddy, what have I done now?

“I’ll come straight to the point; I want you to go behind Ferach lines. Pick up a certain parcel, a simple leather satchel and then fight your way back through the ‘pointy-eared’ barsterds and deliver that parcel to me. Within three days...

Freddy looked down at the papers spread over Wogan’s desk. The first was a handwritten invoice for eight barrels of Rotgut Brandy from Freddy to some innkeepers, the second an official report naming Freddy as the lone thief who stole the Generals horse Sheer Guard and the third, fourth, fifth and sixth (you get the idea) were chits signed by Freddy - long-forgotten gambling debts; all-in-all enough incriminating evidence to put our Freddy in debtors prison for some considerable time.

You will understand why Freddy nearly choked on his fine Brandy and after a short coughing bout peered at Wogan through blood shotte eyes.

“Okay, I get the b***dy point, what forlorn hope adventure do you have planned for me this time?”

And promptly pocketed the bottle of Brandy.

There you have it dear reader, yet another adventure for our Freddy, and his posse. Leading a small group of six Redcoats, Freddy must make his way to the ruined inn and retrieve the satchel. Only Freddy knows what the satchel contains and only Freddy knows that should he try and get away with anything b****y underhand, Wogan will hunt him down and if he’s lucky; only shoot him!

Unfortunately for the Orcs of Albion, one of the guerrillas has been captured by Major Ducos and revealed the location of the hidden gold. Major Ducos has despatched a patrol of Voltigeurs under the command of a Captain Chirac to intercept the Orcs.

Once again our favourite Orc Sergeant has found himself embroiled in a sticky situation, or as Freddy might say “neck deep in ****ing s**t.”
Now at this stage, you might think that things could not get any worse. How naive you are dear reader. Remember those international bankers? Well they have decided that the gold - yes the very same gold that Freddy is tasked with retrieving - would be much more at home back in their own little ‘piggy banks’ and have employed some Todoroni to retrieve the gold at any cost. Not your average bumbling Todoroni soldiers, oh no, real Mother ****ers, the sort you have nightmares about, the sort with quiet whispering voices and extremely sharp stilettos. The sort who leave horses heads as calling cards. They have been very well paid to make sure that there are no mistakes and, of course, no witnesses.

Major Caponi has under his control a section of ten Todoroni, seven lesser toads (all armed with extra knives, very sharp knives, they do so like their knives) and three greater toads (these don’t need knives; they don’t need anything other than their fists). He also has very deep pockets, pockets deep enough to bribe some Guerrillas and acquire the whereabouts of the hidden gold.

A four foot by four foot gaming board with a small ruin lying in the centre of the board and just to the side of a rough road that runs from North to South. Add some additional terrain, a wall, some olive trees or a hill. Just enough to make the table look pretty. 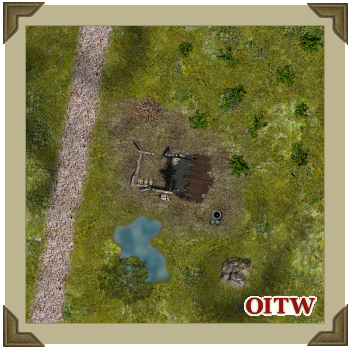 Freddy and his Redcoats (the posse)

Freddy, you should know how to play our hero and his posse by now? Freddy must enter from the South and return the same way. 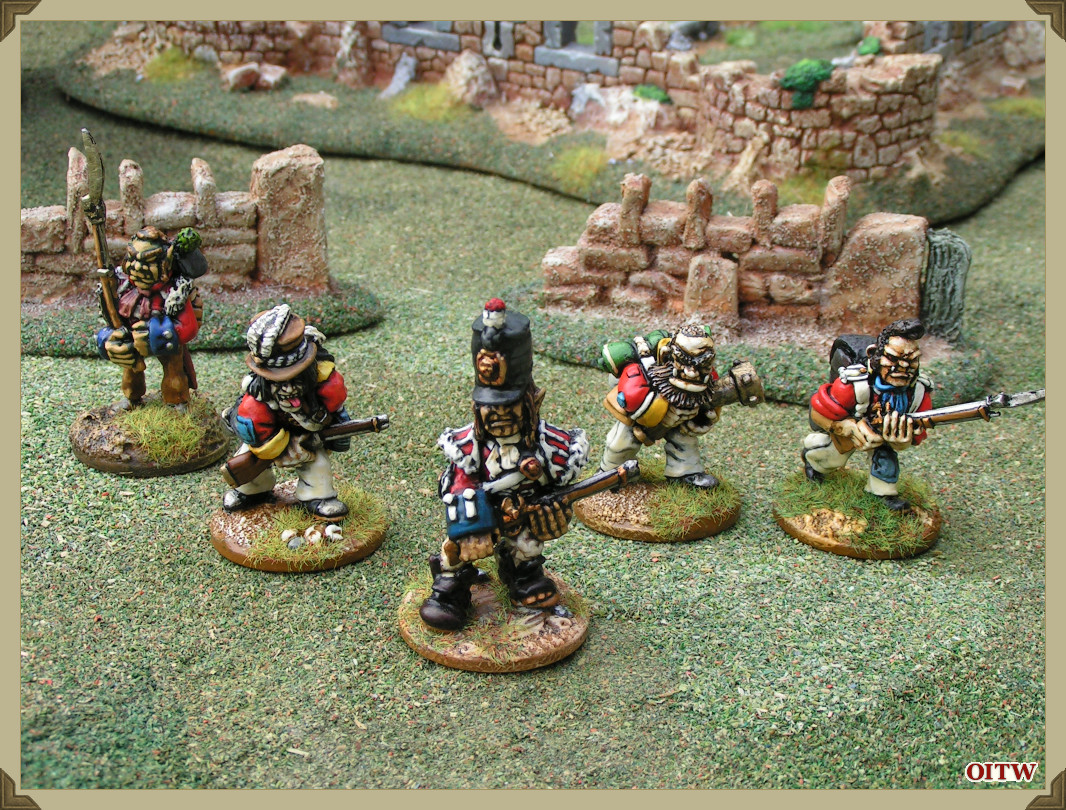 Captain Chirac and nine Ferach light troops all armed with Ferach Elf rifles, swords and a couple of knives. The Ferach enter from the North and must return by the same route. 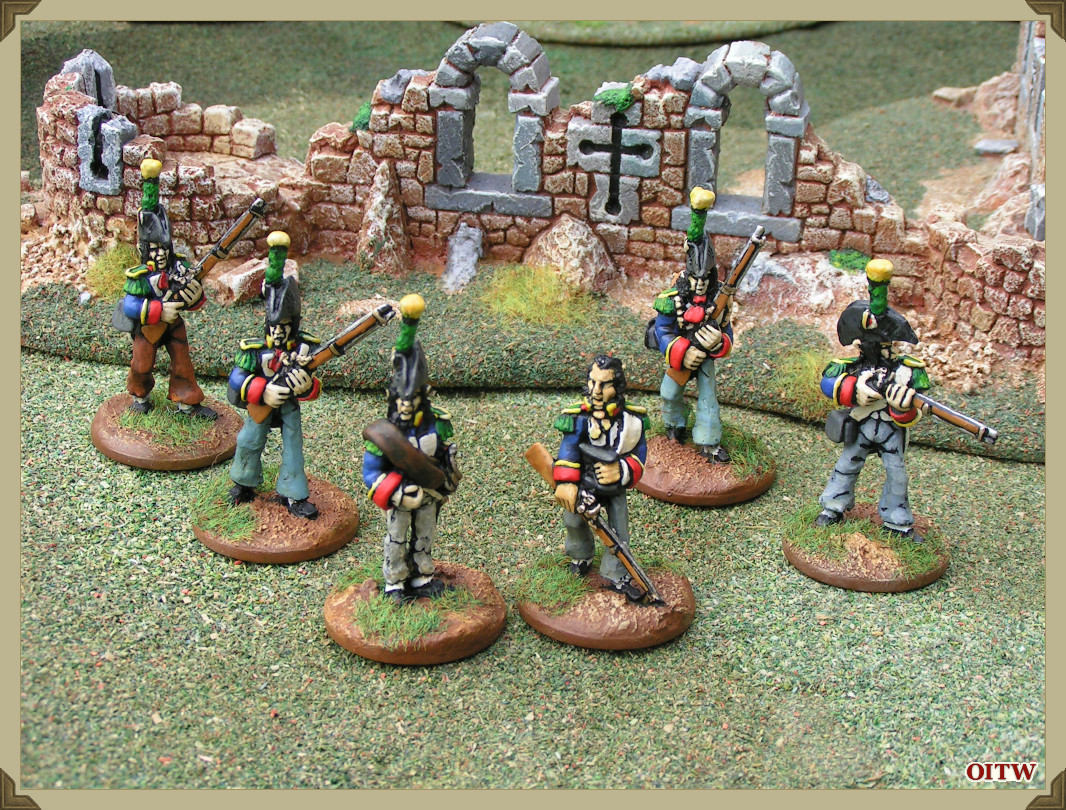 Major Caponi (not your average Toad)

Seven lesser Toads and three Greater Toads. Caponi arrives from the East, but can exit the gaming table via the East or the West. 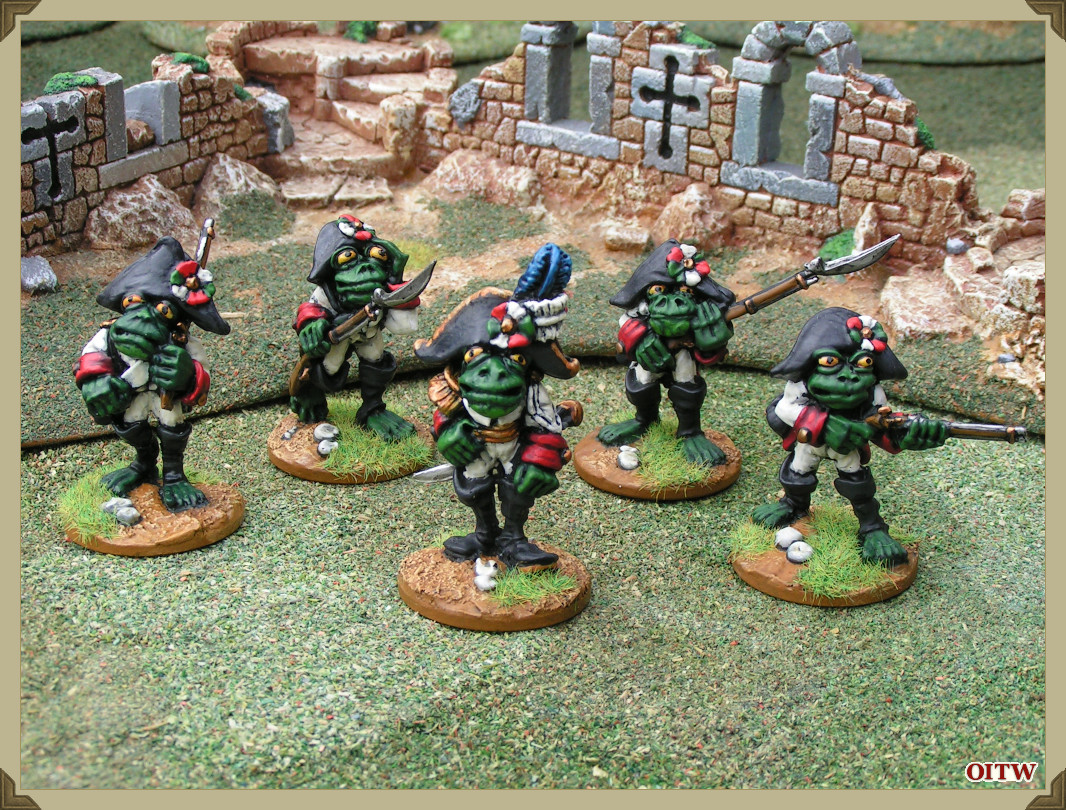 Oh, that’s simple – get the Gold. Whoever exits the board (via the correct side, or sides) with the satchel of gold coins is the winner. It takes just one player to carry the gold - The Kyngs Shilling, so this could be a short game! The character carrying the satchel can only move at walking pace and is not able to use either a rifle or sword while carrying the bag, he can however, use a knife.

On the other hand, where Freddy is concerned, anything could happen in the next five ****ing minutes.

It is possible to play this scenario as a solo adventure, Freddy against the Ferach. But I feel the true pleasure of this encounter is the uncertainty of the third force, the Toads. To increase the confusion, I suggest that for the first three turns and at the start of each players turn a D6 is thrown and in turn one a 5 or 6 will mean that the successful section can enter the gaming table this turn. In game turn two a 3, 4, 5, or 6 will do while at the beginning of turn three all remaining section can enter the gaming table.

I believe that this simple mechanic will be enough to give some variety to a simple ‘search and retrieve’ scenario. Whoever finds the gold (all three groups know it is hidden under a stone in the main room of the abandoned inn) will have to spend one turn securing the satchel.

When building the Todoroni section under Captain Caponi try to add ‘gangster’ or ‘Mafioso’ names and characteristics. It helps to play this group in whispered Italian accents.

Catalucia can experience some damp and misty weather and this morning is no exception. At the beginning of the game, throw a D10 and whatever the result, this is the number of turns that the wet morning mist hangs around. Reduce all visibility by 25% and the chances of a misfire are increased as the damp will have some adverse effect on your Black Powder while the mist lingers.

I would love to say that this is an original gaming scenario. However it is inspired and, in the main, copied from a Napoleonic Gaming Scenario found on the Internet. For full details go to Kings Shilling – Spirit of the Game at www.spiritofthegame.org.uk The same page has other scenarios that may interest you.

I have added Foul Mouth Freddy and Flintloque references which I hope give the scenario some added b****y colour, while the special rules should make this a fun multi-player game. I also suggest that the marker or token for the Gold is either a gold foil-covered chocolate coin (maybe one left over from Christmas) or a bag of Gold Nuggets (yellow bubblegum sold in small draw-string bags). The winner can then have the dubious honour of consuming the booty!

Remember my gaming scenarios are all about having fun. If you win, then that’s a bonus.

(Even if he got shot to bits, Freddy's lucky like that...)

An Orcs in the Webbe Original! "The Kyng's Bloody Shilling" was written exclusively for Orcs in the Webbe as the first of it's 2014 Saint's Day scenarios. However, due to the Editor moving house and popping over to Brugges for his anniversary it was first published on Wednesday 12th March 2014.

Foul Mouth Freddy has been a huge hit with Flintloque fans ever since he first appeared here on OITW a few years ago, he has had several adventures published here on OITW as well as some on Alternative Armies online content portal Barking Irons.

This release also includes a new battlemap, The Ruined Inn. I created it using elements from both DeviantArt and the Dunjinni forums. It's my first full size map I've released and is a bit rough in places. Whilst you can use it as a guide to laying out your tabletop it was designed primarily for use with your favourite virtual tabletop software, in my case Roll20. The map is sized at 3360x3360 pixels which translates into 48x48 70 pixel squares, perfect for use with Roll20.

Sources Used: The background is 'base grass file' by David Hemenway (hero339 on DeviantArt). All other elements on the map come from a variety of contributers to the Dunjinni forums and I thank them for creating such an excellent resource.