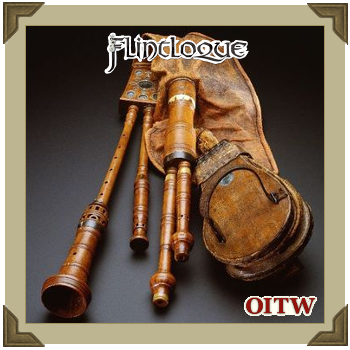 The bagpies of Joccia are more than just an instrument, herein lies but one tale of just how they can be used to fight the evils found upon Valon, the land of Alternative Armies' Flintloque.

The Highland Rats from loyal Joccia have for many years been stalwart supporters of Albion in the Wars against  Mordred the Usurper. This is the story of one Rat Piper who was sent to fight in the Wars of Urop and then came back to his highland home to free his fellow rats from a truly evil She-Witch.

The Laird of Wheelhope was the weak and bullied husband of an evil and bitter Lady (in these times, every Lairds wife was styled Lady). He would spend all of his time hunting and fishing while his wife was left to rule the household with an iron fist. In fact Lady Wheelhope would beat and whip all of her household, it is even said that on more than one occasion she had murdered or poisoned one of her ladies in waiting and the reason for this treatment?  Lady Wheelhope was an unbeliever and detested anyone who was religious, in fact she could not accept any who prayed on the Sabbath, or crossed themselves. This treatment meant that few stayed in her employ for long, but those who did were careful to make sure that they never showed any hint of their true feeling to her or towards the church.

As an example of her treatment of her hirelings, there is the story of poor Missy, who was so cruelly beaten by the Lady that she sought out the Laird and pleaded with him to do something. His reply was to say that she (Missy) should have been more careful as to whom she offended.  Just three days later Missy was found dead. Her family attempted to bring the case to the authorities, but we are talking about a time long before Sentinel’s Law had made it to the Highlands of Joccia and those in power were less knowledgeable of the ways of the world.

The case was dropped.

Her treatment of the fairer sex was to beat them, have them whipped or curse them with heathen screeches so foul that all who heard them would quickly turn and retreat to a haven far from her voice. The male members under her control were subdued, bullied or sent away to join the army and die in battle.

This is the tale of Merodach the youngest son of the Lairds piper who one day took the Piob-mhor or Great Highland bagpipes from the main hall and began to play a beautiful lament that was so powerful in composition that all who heard the tune stopped what they were doing and listened intently to the music. All that is except the Lady Wheelhope who was so incensed by the sweet melody that she went into a great rage and throwing the Great Highland bagpipes at Merodach, exiled him from both the house and the lands of the Laird of Wheelhope; condeming him to death as a fighting Rat of the local Militia.

Merodach was  the son of a Piper and with the fabled Piob-mhor bagpipes he was welcomed into the Jocian Militia and later the great Straithcarnage Highlanders. He soon became the regimental Piper. In this role he literally marched across Urop at the head of one of the largest Armies ever assembled.

Fighting in all of the great battles of The Mordrean War, alongside the Orcs of Albion, KGL Ogres and the Dwarves of Krautia, Merodach and his magikal pipes were a great regimental and army talisman. There are many tales of disorganised troops on the verge of breaking, who upon hearing these stirring tunes would rally and later seize victory from the jaws of defeat.

As the long wars against Mordred moved on and across the lands of Elf, Goblin and Dwarf, tales of the Piob-mhor – The Great Highland Pipes and Merodach the piper at the head of a column of Highland Rats became a common theme in both lore and song, one such action was at the great battle of Slaughterloo, where the Straithcarnage Highland Rats marched to the rousing tunes of the pipes taking the important farm at La Hay Sainte, Merodach belting out great rousing tunes that all who heard would remember until their dying days. Even Wheelin Turn was moved to say of the drone that in terms of troop moral Merodach and his pipes were worth a whole brigade of trusty Orc Redcoats to his Grand Alliance.

The power of the Highland Bagpipes in the hands of this accomplished player was a huge influence on the outcome of this epic battle, the dour tunes spoke to those who heard them of Great Battles, Heroic deeds and acts of true strength and will power. It was as if all the voices of the highlands were egging on the Grand Alliance to supreme sacrifice and ultimate victory. The tunes filling the air with the music of the heather filled Highlands.

During this epic battle Merodach was wounded three times by Ferach Voultigers and although none were serious, he was given a leave of absence to return home to his beloved Joccia. It was on this return that Merodach fought his most dangerous action, an action where his only weapons were the Piob-mhor pipes and his own will power. Lady Wheelhope, the evil Witch was the opponent.

As Merodach arrived on the outskirts of his childhood home, he pumped up the tartan covered hide bag and in full ceremonial uniform of The Straithcarnage Highland Rats, proudly marched into town. The stirring music brought all to their doorways to wonder at the beautiful tunes and marvel at this fine example of a Highland Rat. It says something of Merodach’s time serving in the Wars of Valon, that few recognised him as the pimple faced ratling that years earlier had been exiled to die fighting in the far of Wars of Valon. However a Father’s love is a powerful thing and the older piper immediately recognised his long lost son and stood in awe as the music of the Piob-mhor roused all to both gather at the village green and stand, listening to the piped music. Then they set out marching for the Laird’s castle.

Not long after Merodach was outside the huge wooden doors of the castle with the throng of townspeople crowding behind him. Lady Wheelhope glowered from the battlements and a powerful battle of wills ensued – the air was full of Wylde Magik, blue lightening filled the air and ears were filled with both the bagpipes lament and the vile curses of the she-witch. Those who witnessed the event will talk of gigantean will power and dark evil curses, the two combatants very quickly realised that this was a battle neither could afford to lose.

It would be easy to say that the resultant defeat of Lady Wheelhope was a foregone conclusion. Anyone who was there will tell you that it was a close run thing, but the young piper and the enchanted Piob-mhor bag pipes were too strong for the cursing witch and with a heart stopping screech Lady Wheelhope fell from the battlements into the loch.

Her body was never found even after the loch was drained there was just no sight or sound of the banshee. No tooth or bone of the Witch to cloud the Laird’s land.

The villagers and even the Laird found life after the evil witches demise was so much better, the Piob-mhor pipes were once again hung in pride of place in the main hall of the castle and life was (at least for the moment) better and brighter.

This article was written exclusively for Orcs in the Webbe and was first published on the 17th December 2016 as part of it's 2016 Advent Calendar.

Full stats along with a scenario featuring the Piob-Mhor will be online to celebrate Valon's version of Hogmany will be online in January written by none other than little old me!!!