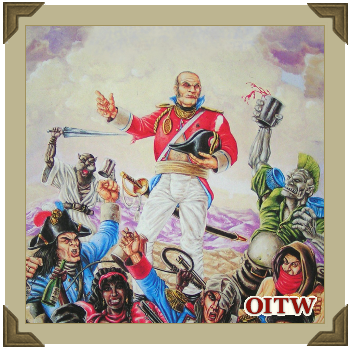 In 1997 Alternative Armies released a rules booklet and accompanying boxed set of villanous characters for use with Flintloque, its Napoleonique Skirmish Game. No longer did players have to field strictly uniformed units whose allegiance lay with their home countries. Taking inspiration from characters and situations in Bernard Cornwell's Sharpe, as Flintloque itself did when it introduced us to the 105th Orc Rifles, the Obidiah's Army booklet brought us some memorable characters and full rules for deserter bands.

Over the years Flintloque has been overhauled and updated, first in 2002 with Flintloque Reloaded and again in 2005 with the current Flintloque 3rd Edition. The new edition is very different to it's predecessors with a new and tighter skirmish ruleset. This meant that many of the rules found in booklets, like Obidiah's Army, were no longer valid. The scenarios could still be played with a bit of tweaking but anything that relied heavily on rules and special abilities needed a bit more work.

So with that in mind back in 2010, Craig Andrews, creator and owner of Orcs in the Webbe, worked closely with Alternative Armies and updated the Obidiah's Army Character Booklet making it fully compatible with the new rules.

I'd like to thank a few people who helped in bringing this project to light. Firstly Gavin Syme for letting me bring Obidiah and his nefarious band up to date and publish the results here on OITW. Due to my lack of organisation I had back in the 90s my miniatures were safely stored but the box has long gone so thanks go to Tony Harwood for the original box art photographs he sent through at my request at the eleventh hour. I'd also like to thank my better half Emma for the removal of all my errant apostrophes and all the other such grammatical faux pas I commit on an hourly basis. And special mention must go to my original Flintloque group; Ben, Mark and CJ, for having already chosen their forces leaving me with the Deserters back in '97.