A Panzerfäuste Scenario by Steve Blease 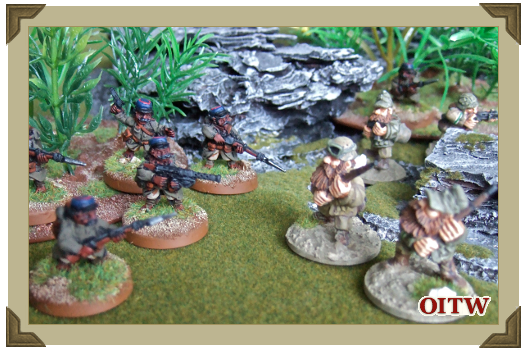 Unterfeldwebel Steiner and the rest of StrafGruppe Loki, on a vital mission to destroy a shipment the Orcs fortifying cha leaves, come up against the native askari troops... The Halfelins.

Steiner slowly and quietly pulled back the cocking handle on his sub-machine gun. To his left Schwarz batted away another verdammt mosquito, their eyes straining to see through the sub-tropical undergrowth.

Wotan’s beard cursed Steiner under his breath, pondering his options. It was quiet, too damned quiet but his dwarves needed to move and move quickly. Time was of the essence and that time was running out.

Half-turning Steiner gestured to two of his “Stormers”, Furzkopf and Geier to break off and flank the suspicious looking patch of undergrowth that covered part of the jungle path. Another flurry of hand signals saw Obergefrieter Dietz and Oberschutze Kruger drop to the ground and aim the section’s light machine-gun forward.

Suddenly an inhuman scream ripped through the air. Gunfire opened up all around. The dwarves threw themselves to the ground as bullets landed all around them. Slam! Slam! Slam!

Steiner fired an unaimed burst into the vegetation. The light machine gun opened up. It’s distinctive ripping sound adding to the cacophony. Smoke filled the clearing. Dwarves shouted. Some screamed...

First Section, 3rd Platoon, StrafGruppe Loki has been attached to the Dwarf Ausland Korps (DAK) fighting the Orcs of the Eighth Army (so called as it is 1/8th the size of a regular Orc army) in the deserts of northern Umbongodwongoland.

DAK commander General Rumtopf (nicknamed Der Wüstenkatze - the Desert Cat - on account of his long whiskers) has sent Steiner’s Stormers on a secret mission south through the central jungle hinterland to destroy the latest crop of recently harvested cha leaves which are vital to the allied cause in the Great Desert Campaign, given the boost to Orc morale the daily cuppa cha brings.

News of the Dwarves mission has been uncovered by Orc magicians but to the frustration of Eighth Army commander General “Bunty” Brunhnákh none of his special forces (including the famous Long Range Dessert Group, so named for the lengths they would go to to secure a decent pudding for the general), are in a position to intercept the dwarves before they reach the store of cha leaves .

Faced with the prospect of disaster in the desert and humiliation at the hands of the stunties and their rat allies, Bunty is forced to approach his Gnome allies for their help. Whilst the Gnome Foreign Legion is fighting alongside the Orcs in the desert, the Gnomes are able to release some local native askari troops to intercept and destroy the Dwarf raiders - Les Troupes Coloniales Umbongodwongolese Halfelins.

Halflings are one of the indigenous races of Umbongodwongoland with many tribes being found across the continent from the southern grasslands to the central jungles. After nearly one hundred years of fighting, the Halflings have found themselves a conquered race under the dominion of one or other of the colonial powers. However the fact that it took the rifle and machine gun armed Orcs, Dwarves and Gnomes a century to defeat a population of three foot high natives armed with pointy sticks and wicker shields has led the colonial powers to have an appreciation of the martial prowess of the Halfling. This, coupled with the fact that no right minded Orc, Dwarf or Gnome wants to serve in Umbongodwongoland (it not being the quality tourist destination imagined pre-colonisation) has led to the colonial powers having to raise units of native halfling soldiers (often called askaris an abbreviation of “ask ‘arris” what the natives were told to do when first being trained by Orc NCO’s).

Halfling Magick is shamanistic and certain Halflings can use The Evil Eye.

Like the other races Halfling cuisine can enhance the capabilities of Halfling troops.

The Dwarves are on a top secret mission and must cross the board to reach the important store of harvested cha leaves (off table). The only forces that can stop them are the Les Troupes Coloniales Umbongodwongolese. 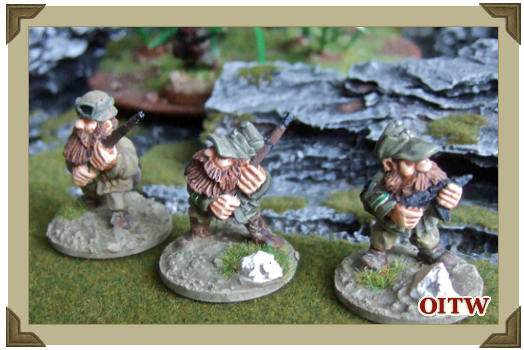 The Dwarf force comprises of StrafGruppe Loki from the main Panzerfäuste rulebook. 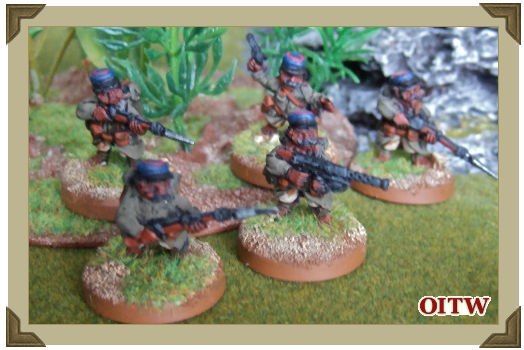 The Halfling force comprises of two sections of eight Les Troupes Coloniales Umbongodwongolese and can be randomly generated for the scenario.

This can be left up to the GM but there should be a mix of 25% heavy jungle, 25% light jungle, 40% grassland (with patches mastodon grass which is head height for Dwarves and Halflings) and 10% swamp.

The Dwarves must exit the southern edge with over 50% of their force alive. Any less than that will be hunted down and probably eaten by local Halfling tribes armed with pointy sticks.

"Disposable Heroes", an Orcs in the Webbe Original article introduces Halflings to Panzerfäuste's setting, The Land, and was written exclusively for Orcs in the Webbe's 2013 Advent Calendar and was first published on Tuesday 10th December 2013.

Steve Blease is the owner of Wessex Games and the co-creator of Panzerfäuste.

For anyone not familiar with the game, the free 'lite' version of the rules are available here on Wargames Vault.