Balls to the Wall

"Balls to the Wall" 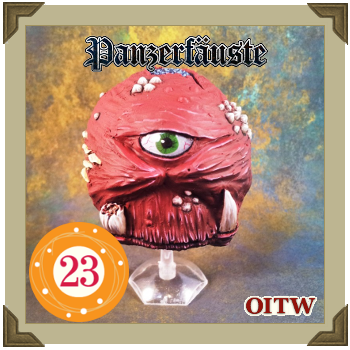 Stuermer’s Stormers have been tasked with exploring the depths of the Troglodyte mountain nest and weeding out any last vestiges of resistance. Unbeknown to the Dwarves, there is more to fear down there than just some exhausted Troglodytes...

Furzkopf wiped the back of his hand across his sweaty brow as he stood in front of the commander of the First Section, 3rd Platoon, StafGruppe Loki, better known as ‘Stuermer’s Stormers’.

In a low voice he addressed his Unterfeldwebel. “They’re holed up in cavern just around the bend. There are about a dozen of them. Hard to tell exactly as they are hunkered down behind some rocks in the middle of the cavern. I can’t see any exit, though the upper cavern walls are honeycombed with small holes. I think we’ve got the buggers trapped at last sir”.

Unterfeldwebel Stuermer nodded, “right lad, get back with the rest. Good work. Dietz to me”.

“The last of the bastard Black Brigade are in a cavern just around this bend. They can’t be in any fit state to put up much of a fight so we go in hard and fast ok?”

Dietz hefted his light machine gun and checked the gun was cocked. “Hard and fast it is….”

Five minutes later the Dwarves were poised just outside the cavern entrance. From their vantage point they could see twelve Troglodytes, a number clearly wounded, all looking weary and desperate.

Stuermer slowly raised his arm… Then brought it down swiftly in a chopping motion. “Now!”

Schwarz stood and tossed a stick grenade into the cavern, A huge explosion reverberated off the walls. Dietz let loose a blast of machine-gun fire. Screams echoed off the wall as the bullets found their mark. Bison and Zwerg charged forward, firing as they went. Return fire chipped the stone floor behind them. Another Troglodyte went down, ripped in half by Dietz’s machine-gun. Gunsmoke and screams filled the cavern.

“Vorwarts!” yelled Stuermer. “We have them now!”

Suddenly the walls seemed to move.

A falsetto scream came from the Trog position. “Przyszli! Przyszli!”

Stuermer looked dumbfounded as the Troglodytes switched their fire onto the cavern walls, their automatic rifle banging away at the largest cave entrance.

Then through the gun smoke Stuermer saw what the Trogs were firing at. Out of the holes in the cavern walls, strange round creatures were floating down onto the Trog position. Blood red and all teeth, they looked the stuff of nightmares. One dropped on a Trog biting him in half. An explosion of blood and entrails smeared the rocks.

“Stormers!” Stuermer yelled. “Target those Dämonkugeln, before they kill us all!”

Following the fall of Tôrg-dom, First Section, 3rd Platoon, StafGruppe Loki, along with many penal units, have been tasked with exploring the depths of the Troglodyte mountain nest and weeding out any last vestiges of resistance. The Stormers have discovered a small unit of die-hard Black Brigade troops and in a series of battles in the dark underworld have eventually cornered them in a small cavern, deep in the mountain.

Unbeknown to the Dwarves, there is more to fear down there than just some exhausted Troglodytes…

Their mission is to wipe out the remaining Troglodytes.

Troglodyte Force: the Trog player has 3 Sekcja, I Pluton, 10 Brygada Kretwojna (the Black Brigade) under their command. An Elite unit (the modifier is included in the Guts values below) but one badly worn down by a series of battles during the Dwarf invasion.

Their mission is to hold out and defeat the Dwarves.

A 4’ by 4’ board should be used. It represents a small cavern deep underground and the tabletop should over plenty of cover in the form of rocks, stalagmites and luminous underground fungi (see issue two of Panzerfäuste G2 for ideas on underground scenery). The Trogs are deployed in the northern half of the board. The Dwarves enter from the south and start first.

Deep underneath Troglodyte mountain nests, many weird and wonderful types of flora and fauna can be found and Tôrg-dom is no exception. Trog legends tell of the floating Śmierćpiłki, the Death Balls, but few have seen them and fewer still live to tell the tale. Living in caves and fissures in the walls of caverns deep underground, the Śmierćpiłki hunt their prey down by sound of their victims and the fighting that has spread beneath Tôrg-dom has certainly attracted their attention…

In this scenario, every time a figure fires a weapon or throws a grenade once they have completed their Guts roll, they roll one D6. Upon a roll of 6 (for a single shot or controlled burst) or 5 or 6 (for a grenade or burst) D3 Śmierćpiłki appear out of the cavern walls being placed on the nearest table edge to the figure who fired their weapon.

They can move 8cm a turn and have Guts value of 8 in Close Combat. Their Guts level does not increase or decrease. They need to be killed by a Critical Success but a Successful fire action against them will stop them moving for one turn. They always move towards the nearest figure and attack them. Once they have defeated that figure, they attack the next nearest…

If you are using Panzerfäuste Unarmoured to play this scenario. Use the Orc weapons stats as the Trog equivalents (treat the Automatic Rifle as an Orc lmg) and the Dwarf movement statistics.

The Stormers haven’t yet been released in miniature by Hysterical Games, so use the Dwarf infantry section or the old Wessex Games figures as proxies.

I have converted my own Black Brigade (see Panzerfäuste G2 number two available on WargameVault) but feel free to use whatever proxies you wish (and pester Hysterical to make some, the Troglodyte army needs them!)

The Śmierćpiłki are from Macrocosm’s Balls range, surely the weirdest Kickstarter of 2016, what was Chris at Macrocosm smoking? If you didn’t get your hands of Chris’s balls during the Kickstarter you can use some proxies made out of plasticine or air-drying clay, though if you send Chris some money you can be playing with the his balls very quickly.

I have only used the basic balls in the scenario, feel free to introduce any of the expanded Balls range into your games as you see fit – the fire balls could be fun!

An Orcs in the Webbe Original! "Balls to the Wall" was written exclusively for OITW's 2016 Advent Calendar and was first published on Friday 23rd December 2016.