"If You Go Underground Today"
(You're sure of a big surprise...)

A Panzerfäuste Scenario by Ben Honey 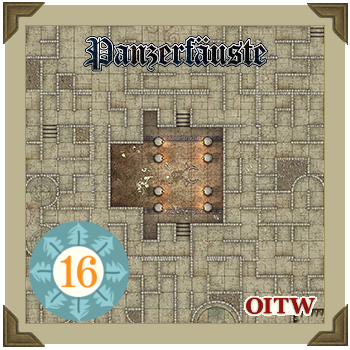 With the war effort not going well Heinz' Hammerz has been tasked with exploring an underground site spurred on by rumour, legend and the half-translated scribblings in a recently-found book.

The war effort has not been going as well as the Dwarven high command had been hoping, and they are now looking for new technologies and old magics. It is this second part that has brought Kapitan Bentz and his Ausdenkerkorps to this remote place, spurred on by rumour, legend and the half-translated scribblings in a recently-found book. There they have found ruins with a doorway buried behind a rockslide. The weathered stones on either side feature the remains of a picture showing what appears to be a riding competition with acrobatics, but it is hard to be sure.

It is now the job of Heinz' Hammerz, the Elite section led by Unterfeldwebel Heinz to explore the underground site and report back, to live up to their reputation, though this may also be due to the Kapitan wanting out of range of his nose, due to the Hammers other reputation due to their habit of eating lots of beans! Either way, armed only with their weapons and their wits, into the dark they must go.

After exploring an underground complex mainly full of twisty and often quite narrow passageways, thankfully lit by a type of bioluminescent fungi (though it adds a green tinge to the mood), Heinz’ Hammers  have arrived at what seems like the central chamber. If not for the Mk2 improved marker paint in their possession, they would have been quite lost and might never have found their way out again.

For this Panzerfäuste adventure, I would recommend using the excellent Heroic Maps - Geomorphs: Labyrinth: The Minotaur's Lair, as well as the related passageways and chambers packs to create the underground complex with just one exit point off the table. They are print and play products available on Wargame Vault and can be  printed out or used in your favourite virtual tabletop software.

The Dwarf player has Second Section, 2nd Platoon, the Heinz’ Hammers under their command. They have taken a few knocks getting to the central chamber due to the odd scrape and bang as they explored.

There is a small chance each character has managed to bring some cuisine with them (on a roll of doubles on 2D6). If they have, roll randomly for it (1d4 on that nation’s cuisine table).

Characters should be armed by weapon type (i.e. they are carrying the weapons the model has) as well as a knife (which may be concealed i.e. not shown on the model).

This scenario takes place underground, but due to the Dwarves heightened underground vision, as well as the light from the bioluminescent fungi, this does not have any noticeable effect. The light does add a green tinge to the mood of the place, also not helped by what looks like very old dry streaks of blood on some of the walls and floor.

The Dwarves were tasked with exploring and mapping the underground complex, but from their point of view it may now be escaping with their lives!

The Dwarves should placed at the bottom of one of the stairs leading into the central chamber. There should then be 6 treasure markers placed in the chamber, one in each corner and 1 in each alcove. There is a sudden tang of ozone in the air.

When a model is next to a treasure marker, it may may use one action to examine it and see what has been found. Roll a D6 and look at the following table for the result:

1 - A large bronze ring, with something inscribed on it. This looks useful and valuable...
2-5 - Broken pots, of interest only to an archeologist, discard.
6 - A linked pair of stone tablets with ancient writing on.

Once 1 or 6 have been rolled, reroll any further results, the 5th and 6th markers will automatically have a result of 1 and 6 respectively

Both the bronze ring and the stone tablets may be passed between two models in base contact for one action. if the model carrying them is reduced to less than 2 Guts, leave a marker representing them on the board where this happened.

At the start of the second turn, a new large figure (The Beast) appears in the centre of the pillars in the chamber, with anyone standing on that spot pushed back so that they are not quite in base contact with the new figure.

At the start of the third turn (The Beast is unable to be affected by any attacks during the second turn), start to use the ‘Jabberwocky’ entry from Matthew Hartley’s Wilde Thinges rules found here on Orcs in the Webbe.

The monster looks like a cross between an ogre and a skogtroll, big and muscular and with brown hair. Its head somehow looks like that of a domesticated animal, though the look of its eyes is anything but tame. And with the horns sticking out of the top of its head, its seems that the further away you can be the better.

Horns: Close Combat Modifier +2 on the turn the Beast charges. While the Beast is in combat, neither attacker nor defender get bonuses for additional figures within 2cm.

Very Tough: Ignore any results of Killed, instead apply a -2 Guts result.

Very Big: The Beast moves in a straight line, and if it has to stop and then turn due to coming to a wall (such as if in a narrow passage way), this reduces its remaining movement by 2cm.

Fearsome: To attack the Beast a model must first succeed at a Guts roll with a +2 modifier. if failed the attack does not happen and the model loses that action, but does not lose a Guts point.

Should Have Put A Ring On It

If a model carrying the bronze ring attacks the Beast in close combat and wins, if the Beast  is at 4 Guts or less, then the model may choose to place the ring over one of the Beast’s horns instead of hurting it. If this occurs, the beast becomes docile and is treated as a friendly model and so controlled by that models player. If no enemy models still on the table, the game ends.

Minor Victory (one of the following)

- A model exits the table with the Beast in charge range of the model (as assumed the Beast will then follow the model out of the complex).
- The bronze ring has been placed on a horn of the Beast.

Depending on how easy/hard it is found to be, either make the Beast more/less tough (e.g. by giving it a chance to regenerate one Guts point at the start of each turn, activate sooner) or toughen up/reduce the size of the squad.

You may also want to have only a few models starting at the central chamber and then have them leave it followed by the Beast, and randomly generate what passageway/room is found each time a model passes through a doorway for the first time.