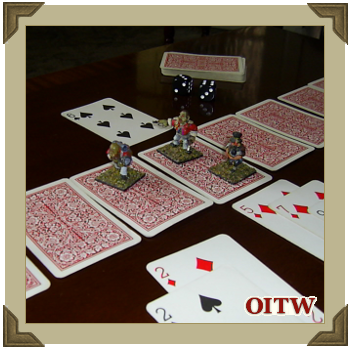 Miniatures and Photo by Craig Andrews

Matthew Hartley returns to the ever popular Tales of Albion setting with this fun and fast stand alone game in which a group of convicts try to escape the justice of gnashing teeth following a prison break.

"The life of inmates of Albion’s penal system during the Mordredian wars has been described as nasty, brutish and short. Not significantly different therefore from life outside prison , or indeed the inmates themselves. Despite this, convicts were want to attempt to abscond from their well deserved fate. Those who broke free would be mercilessly pursued by the authorities and their fearsome blood hounds."

Except from 'A Prisoner’s Lot is Not a Happy One: Crime and Punishment in Mordredian Albion'

Release the hounds is a stand alone game, best played following or during the consumption of alcohol. Each player is a convict attempting to escape his pursuers. The good news is that there is one less hound than escapees. Run fast and remember, you can always trip another convict to give you that edge!

To play the game you need one pack of playing cards including court cards and jokers, and one figure for each player to represent their convict.

Shuffle the deck and lay out 20 cards face down long edge to long edge. Designate one end of the line of the cards as Escape and the other as The Hounds!

The aim of the game is for players to move their convicts along the card track and exit from the Escape end of the track. Should the figure move off the track at The Hound end, the convict has suffered a horrible fate and the player has lost.

Each player rolls 2D6 dice and places their convict on the card that number of cards from The Hounds end of the track.

The remaining cards are shuffled and placed in a deck which everyone can reach. Each player then draws two cards from the deck.

Release The Hounds! is played in a series of turns.

Each turn the player who is nearest the Escape end of the track goes first, followed by the other players in sequence (roll a dice to decide any ties).

Each player may play one or both of his cards on himself or other players, or he may discard his entire hand. A player may only play cards in his part of the turn, he may not “hold over” cards to play later.

Red Spot card (1-10) - Move the convict the value of the card towards the Escape end of the track, counting each card as one point.

Black Spot card (1-10) - Move the convict the value of the card towards The Hounds! end of the track, counting each card as one point.

Red Court Card - Played on another player. That player MUST play all his cards (if any) in his hand on the player who played the card on him.

Black Court Card - Played on another player. That player MUST play all his cards (if any) in his hand on any other players EXCEPT the player who played the card on him.

Joker - Roll 1D6 dice. Move ALL convicts that distance. The direction of movement is determined by the player who played the card.

When all players have played their cards then the net effect of all cards is taken into account and the convict figures are moved accordingly. Figures are NOT moved after each individual players card play.

If after movement two or more convicts are on the same card they fight each other (they are, after all, escaped convicts!) . All figures roll a D6. The convict with the lowest score is moved a number of cards towards The Hounds! equal to the difference between his score that that of the convict(s) with higher scores.

Once all movement has been resolved all players draw 2 new cards from the deck to refill their hand to 2 cards.

Should the deck run out of cards, reshuffle played cards to form a new deck.

The game ends when there are no more convicts on the track.

Any convicts who have reached the Escape end of the track have won the game.