After their recent engagement in Zone 5's 'Pig Alley', Sinclair and Oxford come to blows again during a horrific thunderstorm.

A disturbing amount of rain and fog mixed with the darkening atmosphere of Bosworth IV, pushing Sir Connar Sinclair onward towards the welcoming, if somewhat bleak, Sea Moor Inn which rose monolithically from the drab grey blast damaged buildings around the tired Post of Canlastrian Tocs Borderers.

Tired as he was from the day spent on the training and firing ranges, the middle aged knight had learned long ago that, all too often, danger lurked in the darkness. Not creatures of legend, although rumors suggested things may still prowl the Borderlands, but something far worse and more calculating; men! Yordist could be lurking about anywhere in this dreadful weather and making matters worse the ground was becoming saturated, making movement difficult.

Even though the front had moved on, there were still Yordist insurgents wandering about the near destroyed city of Coggshall. They were thick as fleas on a stray dog in the Zone 5 slums. That was why a crack mercenary company like the Lothian Tocs Borderers were kept on station here. They said it was to keep the peace. Sinclair and the other Borderers knew the truth though, it was to hunt down and kill the Yordie stay behinds. After listening to the silence for what seemed like an eternity, the Knight slowly waved his Post forward. This damned weather made their heavy weapons near useless as their laser sighting system was only working at half efficiency due to low batteries. Normally fog or rain wouldn’t degrade these much, but with low power packs they were buggered and would be forced to use normal sights if it can down to blows this damp night.

Sir Reginald Oxford could not believe his luck, the figures rising like silent ghosts from the building doorways lining the shell cratered road west of the inn had a familiar look to them, especially that big Household Knight up front. Canlastrian Retained. And that swaggering walk was unmistakable, it was him! That ‘Govnar’ Toc Sinclair was taking a leisurely stroll right towards his position! “I say, there is a God!” Oxford slid back from his covered vantage point along the inn’s garden wall and quickly crawled back to his own post of Retained men. He was blessed to have command of a Yordist Retained Assault Post this night, it was the perfect weapon for such weather and such a target! “Vengeance shall be mine!” Thought the smiling Yordist as he rounded the corner of the inn and dog trotted towards his waiting men.

The Yordists moved up slowly, stalking forward, hunting like dire wraiths, wrapped in the dreary wet cloak of this night. They hesitated, where was their prey? The damned weather had shifted and closed in, they could barely see five paces around them, and the rain had made it all but impossible to hear! Who was the hunted, and who was the prey? In frustration, Sir Oxford called out in a voice as loud as the thunder “Sinclair! I know you are about Sinclair! I am coming for you!”

The next flash seen this night was not from lightning.

A copy of IAG001 Firefight 2.0 Killing Streets for the Firefight rules is necessary to play this mission. Also required are two squads of ION Age Retained miniatures.

One player has a Canlastrian Retained Post returning late one rainy night from a training exercise, low on ammunition for their Moth Type XII rocket launcher.

The other player commands a Retained Post of Yordist Assaulters, lurking insurgents, led by a newly promoted Retained Household Heavy Weapons Knight. The Yordist Post is seeking reprisal for insults and dispersions cast upon them by the Canlastrian Post’s commander.

The mission objective for the Canlastrian player is to find shelter from the heavy downpour, and to stay out of the hands of their attackers. See the special rules for weather in this scenario.

The objective of this mission is for the Yordist player is to seek out cover from the heavy rainstorm then, find and kill the hated Canlastrian Mercenary Tocs Borderer Knight they are seeking, utilizing much stealth to do so.

Create the map as shown in the illustration below. Then place 2 debris markers randomly on each street board (use 1D6 x 1D6 to determine which square, just re-roll any sixes). 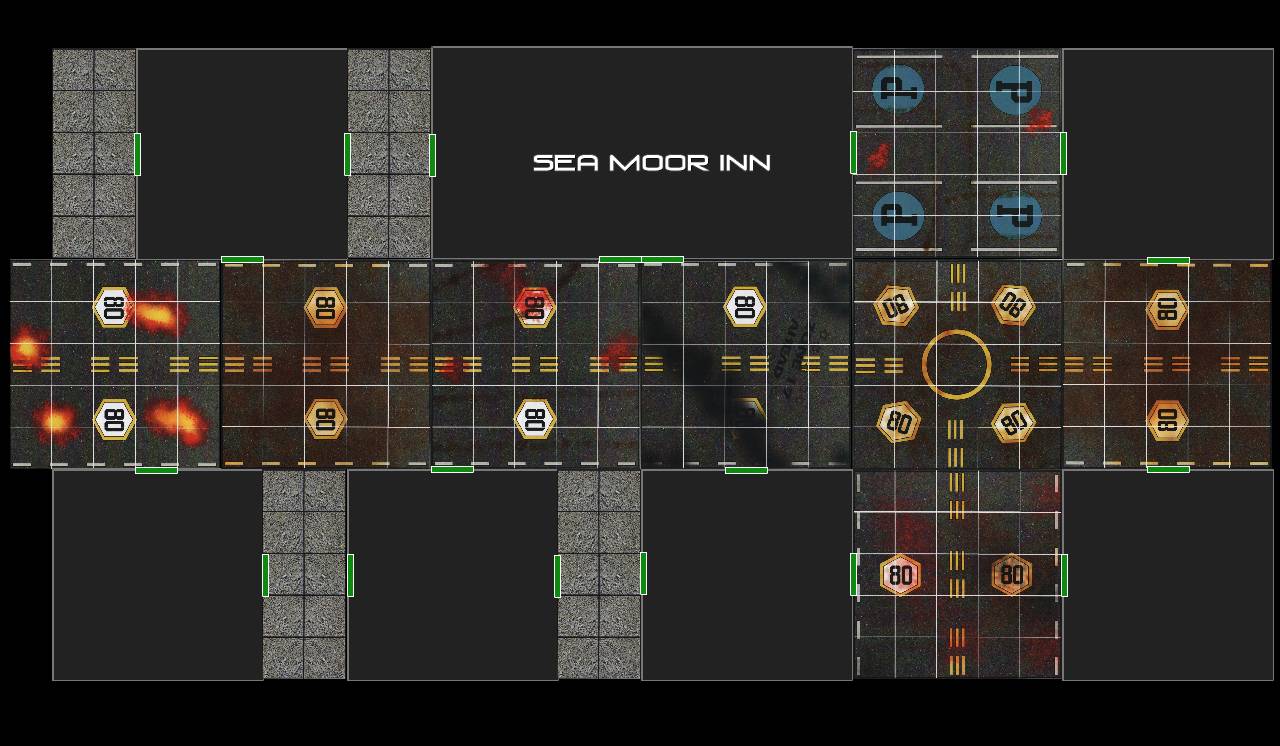 Place your Canlastrian Tocs on starting places 3D6 to the west of the Sea Moor Inn, on the opposite side of the road. Roll for each squad member individually. On game turn one, your Post will move towards the inn until the Yordists are spotted. Once the Yordist are seen, you have freedom of action. Do you enter the inn and fight room to room, or do you determine that discretion is the better part of valour and use the cover of the rain storm to fade away from your hunters and play the rabbit to their hound until game end and you can return with a greater force?

Place your men on starting places 3D6 to the east of the Sea Moor Inn, on the opposite side of the road to the inn. Roll for each squad member individually. On game turn one, your Post will move towards the inn until the Canlastrians are spotted. Once the despised Cannie Mercenaries are seen, you have freedom of action. Do you enter the inn to get out of the storm and hope you haven’t been seen, so you can set a trap for the approaching enemy, or do you immediately attack your hated foe and use the cover of the rain storm to sneak in close and ensure a kill by game’s end?

1. Weather – Periods of bad weather can limit visibility on the battlefield. Instances of heavy fog, rain, or snow can drastically shorten combat ranges, and these conditions can change quickly, either worsening or improving. At the start of each game turn roll 1D6 and adjust the spotting range available to your soldiers:

2. Terrain – Roll a second 1D6 at the start of the game only, this die sets the movement restriction for weather degraded terrain, which will remain unchanged for the duration of the game. On an odd (1, 3, 5) roll, each outside (non-building) square cost one additional general die for a character to enter. On an even roll (2, 4, 6) there is no terrain degradation due to weather.

3. Buildings - The ‘off-board’ sections (shown as grey squares on the map) are considered to be buildings. The central square of each building which faces an alleyway or a road are considered normal entrances (doors) into the building. On the accompanying map these entrances are shown, marked by green squares. It costs two general dice to move through a door. Walls block standard line of sight, however, any figure inside the buildings adjacent to the wall may fire at figures outside at no penalty, representing windows or access hatches granting them LOS to the street. These figures, whilst adjacent to the wall, can in turn be targeted by those outside. They are treated as being in Hard Cover.

This mission is part of the  Firefight 2.0 Campaign Mission Arc , set after the fall of Bosworth IV, and should be played with other missions in the Arc  in the correct order.

This mission is the sixth of a series of missions in an Firefight 2.0 Campaign Arc   which is meant to show the difficulties faced by an occupying force in a built up area in time of war. I have drawn upon the reports of recent military experiences in the modern age and have applied them to this mission arc. When the players have finished all of the missions, it is my hope they will be enlightened to the truly difficult job military personnel have when forced by circumstance and orders to occupy and garrison a city in a foreign land.

The mission introduces the concept of weather impacting the battlefield. Players can add this extra element of entertainment and difficulty to overcome in their missions of Firefight, as the forces of nature and even the very ground may sometimes seem to be against them.

During playtesting the Canlastrian force was able to fight their Yordist foes to both a win and a running gun battle draw over two games. However, one game saw the Yordist take merciless vengeance upon the hapless Tocs, making a casualty of their Knight, leaving him to lie in the cold, wet darkness, alone and frightened, as his Post was forced back by fire as heavy as the weather.