Caught unawares by an IED, Emeritas Kerr and two wounded Mustermen  must hold out against a Yordist Retained squad whilst Chosen Man Cormier searches the nearby buildings for Sinclair's retained Squad. Will he find them in time...

It had been a quiet week, no bombings, no ambushes, no firefights. The work of soldiering had become a walk in the park.

“Perhaps we ‘ave finally netted all o’ the Yordie scum left be’ind when their last division retreated from the smoke blackened husk that now pretends to be the city of Coggshall. We’ll collect our pay and be goin’ ‘ome soon!” Trooper Mackenzie smiled happily to himself as he waved to a comely lass demurely peeking out from the window of a bullet pocked shop.

“Mackenzie! Get yer floggin’ mind back on business and watch where yer goin’. Yer on point ye block’ead!” called Emeritas Kerr from the patrol’s rear. Mackenzie chuckled, all business that was the boss. He was young, he was going to damned well enjoy it. Glancing again at the lass he stepped on a manhole cover. The strangely clear quiet click caught the teenager’s attention, and insidiously allowed enough time for the his stomach to sicken as he realized he was dead or worse.

A moment later came the blast.

The shock wave threw the young maiden back into the shadows of the wooden building’s interior mere moments before the front wall collapsed. The mass of blood and bone that had until a mere moment ago been a young and able Trooper Mackenzie flew into the air and pieces of him began to rain down all around. His body hit the street with a harsh thud, one leg was gone below the knee and the other was missing a foot. Kerr’s HUD told him the poor bastard was still alive. It was shock that kept the young Toc from screaming, that wouldn’t last long. Emeritas Kerr’s legs pumped as he ran to his fallen comrade. As the shock faded he bellowed and cried out in pain and anguish as Kerr wrapped tourniquets around his shredded legs.

Kerr glanced down the street at the rest of his squad. Chosen man Cormier fought to hold down young Wallace as he struggled to sit up and breath. This wouldn’t have been as difficult if he didn’t have a hole in his chest sucking air through the torn rent in his clamshell armor. Out of battle dressings, Cormier used duct tape and the plastic sandwich wrap from last night’s hot dinner ration to seal the wound and keep his young friend from suffocating on his own blood, allowing him to breath.

Kerr sent out a distress call through hus HUD, but he wasn’t sure it got out. The buildings were fairly tall in this part of Zone 5 and they had a tendency to block signal transmission. “Let’s get them inta tha’ shop and out o’ the street! We’re sittin’ ducks out ‘ere! He relayed to Cormier.

By the time the patrol’s two unwounded men had the wounded concealed, a skimmer screeched to a halt at the end of the road and four armed men leapt out. They threw back their cloaks revealing green and yellow Alwite armour and called upon the stricken Canlastrian Tocs Borderers to surrender. They were insurgents; Yordist Retained!

“Cormier! Make like a rabbit and go find us some ‘elp! I’ll stay with the lads an ‘old these boys off,” Kerr growled like a cornered wild dog as he ducked a splatter of incoming 12.5mm fire. “Fer a while at least! Go!”

Cormier waited for the Emeritas to pop up and shower the advancing Yordies with a long burst before high tailing it down the street. He had to find help. He had to!

A copy of IAG001 Firefight 2.0 Killing Streets for the Firefight rules is necessary to play this mission. Also required are Ion Age miniatures to represent one squad of Muster troops and two squads of Retained.

One player has a Canlastrian Muster squad, stricken by an improvised explosive device, and a Retained post in reserve.

The other player commands a Retained Post of Yordist troops. The Yordie Post is hot to finish off the trapped Canlastrian Tocs Muster squad.

The mission objective for the Canlastrian Tocs player is twofold; one - to hold on in the damaged shop until help arrives, and two - to find that help.   At the other end of the long street a Canlastrian Retained post is enjoying a successful instance of foraging in a not too badly damaged pub. They can be of help to the besieged Mustermen if the runner can reach them before his brothers are overrun or the Retained have drunk too much!

The Yordist objective for this mission is to overwhelm and hunt down all of the Canlastrian Mustermen and anyone else who tries to aid their quarry. It is a fox hunt, and the Yordist see themselves as the unleashed hounds of war sent to carry it out! 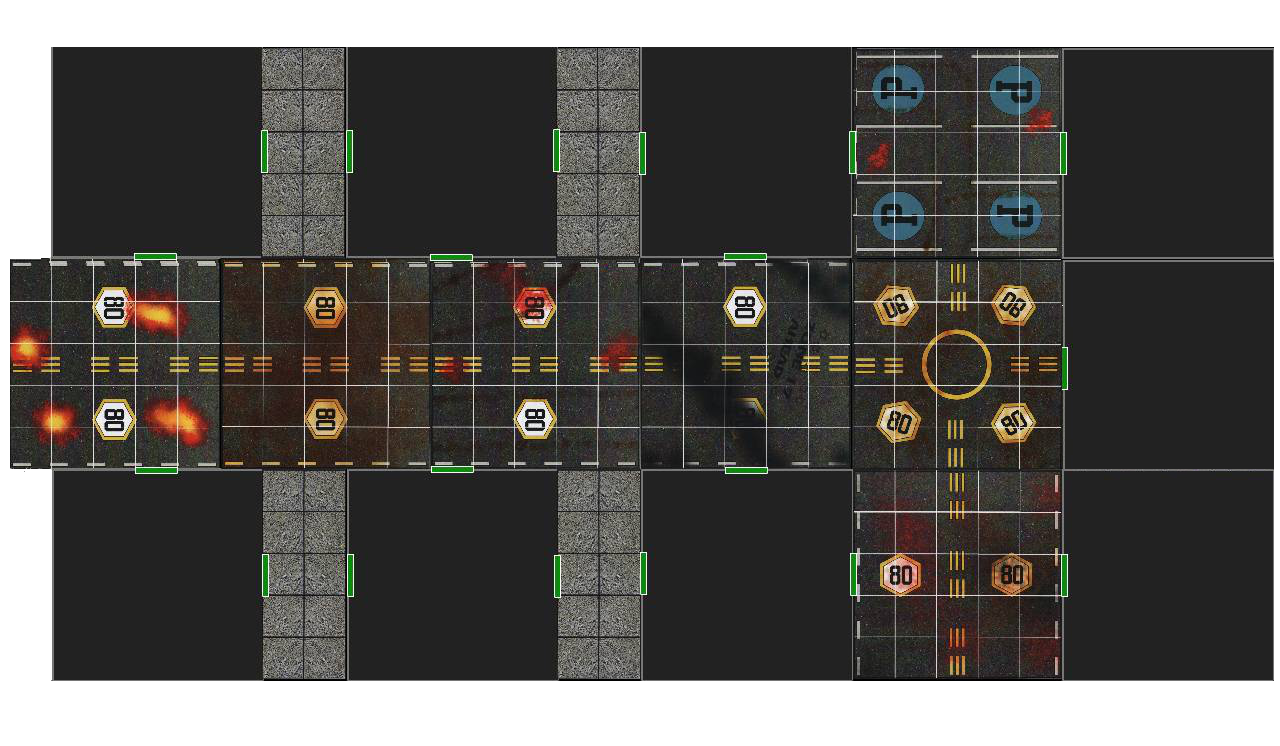 You have a 77 point squad of Muster troops. One Emeritas and three Privates, all armed with Moth Type VI Automatic Rifles. You may have four troopers each armed with a Hobbes Bomb or two troopers armed with two Hobbes Bombs each.

Your Emeritas and the two wounded start in a building of your choice to the left or right of the second street board from the north end of the battlefield (far left). Note down which building, and which squares your men are on, but do not tell the Yordist player. As soon as any of the men in the building move or fire you must place them all in the building. Your stricken patrol must survive until help comes. Mercenary Tocs Borderers are renowned for never leaving a man behind. So your unwounded Emeritas will not go farther than six squares from his squad’s two wounded troopers. The two wounded men may not move, but they may fire their weapons until either wounded again or help arrives.

The squad’s other unwounded character starts in the street on the second board from the North end of the street (far left). He must make a run for the south end of the board to the three buildings (far right), one of which is the starting point of your reserve Retained post. Once he reaches and enters any of the three buildings roll 1D6, if he rolls a 5 or a 6 he has found Sinclair and his men, see the scenario special rules below. If not in the first two buildings he automatically finds them in the third.

Once 'found' by Cormier place the Canlastrian Tocs Retained in the ‘pub’ building, and see the special rules below.

Place your men anywhere on the P2 starting places along the North edge of the road. On game turn one, your Post will move south towards the blast area of your booby-trap. Your characters may then begin to search for the Canlastrian Mustermen, if they do not fire upon you beforehand!

The game will last for 1D6 plus 9 turns as at that time the Yordist must retreat due to the arrival of Canlastrian air support who were alerted by the blast.

2. Buildings – The ‘off-board’ sections (shown as grey squares on the map) are considered to be buildings. The central square of each building which faces an alleyway or a road are considered normal entrances (doors) into the building. On the accompanying map these entrances are shown, marked by green squares. It costs two general dice to move through a door. Walls block standard line of sight, however, any figure inside the buildings adjacent to the wall may fire at figures outside at no penalty, representing windows or access hatches granting them LOS to the street. These figures, whilst adjacent to the wall, can in turn be targeted by those outside. They are treated as being in Hard Cover.

This mission is part of the Firefight 2.0 Pacification Arc, set after the fall of Bosworth IV, and should be played with other missions in the Arc  in the correct order.

This mission is the seventh of a series of missions in a Firefight 2.0 Campaign Arc which is meant to show the difficulties faced by an occupying force in a built up area in time of war. I have drawn upon the reports of recent military experiences in the modern age and have applied them to this mission arc. When the players have finished all of the missions, it is my hope they will be enlightened to the truly difficult job military personnel have when forced by circumstance and orders to occupy and garrison a city in a foreign land.

The mission introduces the concept of a soldier’s morale and the detrimental effects of things such as alcohol or drugs on a soldier. This often overlooked aspect of war, adds an extra layer of ‘fun’ and difficulty to overcome in this mission, as their mates and their own lives depend upon the speed and accuracy of their actions. This mission’s outcome usually depends upon how fast the Canlastrian Tocs runner can reach the supporting Retained post.