An Orcs in the Webbe exclusive! Sam Croes, one of the sculptors for Alternative Armies and 15mm.co.uk is this the focus of this years' sculpting Q&A and answers some questions about himself and his work in the first of this years Christmas interviews.

"Sculpting: A Q&A with Sam Croes"

An Interview by Craig Andrews

Sam Croes, one of the sculptors for Alternative Armies and 15mm.co.uk, answers some questions about himself and his work.

Q. Before we start with the sculpting questions, tell us a little about yourself; where you're from, what you do for a living?
A. I am a thirty two year old man from Flanders in Belgium who has been about a bit. I have been many glamorous things over the years including a graphic artist in the video game industry, an artist and of course the odd toilet cleaning job too. I graduated in traditional art and animation after a fine time at university. As for what I do now well I am now a full time miniature sculptor physical artist and digital artist. What a way to make a living!

Q. Where do you do your sculpting?
A. Mostly at home but sometimes at work too though not often when there are other people around as a head over my shoulder puts me off my concentration!

Q. What materials and tools do you find you use most often?
A. Though I do use the fantastic 'green stuff' I am actually more of a milliput fan. I use the normal range of blades, accessories and such that all designers do, no secret weapons in my arsenal. Actually sometimes just a toothpick and a hobby knife.

Q. A lot of wargamers modify their miniatures; swapping heads, arms, weapons etc. But a lot of people find the idea of even basic modifications a bit daunting do you have any hints or tips to help them ?
A. A steady hand and some practise and you must always drill and pin components together. Keep this in mind and you will not go wrong. Don't just rely upon glue. Small changes first, don't try big jobs before the little ones. After all you would not try and build a kit car if you could not change a tyre.

Q. What would you say to them if they are considering a full sculpt?
A. Referring to what I said in the last question start small. But if a person wants to do a full sculpt they should work up to it, they should research and most of all be sure in their actions. Its a lot of work and it can be disheartening to try a full sculpt and run out of energy half way through. With experience some skill. My first sculpt, which I still have, is so bad that I cannot think of looking at it just like the picture or Dorian Grey!

Q. What inspires you and have you a sculptor or a sculpting style that you try to follow?
A. I love making things. Sure I adore seeing my miniatures in play but for me its the act of creation. The fun for me is in the making and the creating. Always a new challenge and a new fresh idea. Sculpting style for me is a more chunky older style of heroism rather than a highly realistic style some favour now. I admire many designers but I began with Auguste Rodin who worked in clay in the late 19th and early 20th century. For miniatures in the hobby industry I admire Sandra Garrity and Bob Naismith.

Q. Who is your favourite sculptor, past and present?
A. That has to be Bob Naismith! A brilliant talent past, present and future too. I admire him so much because he can tackle hard edge straight line as well as organic and put his hand to anything. That and he is one of the three who created the RTB01 Space Marines original plastic box set for Citadel in the 1980's.

Q: Is there a particular range of figures that you would like to work on?
A. For me the wish that I had actually happened this year. I wanted to work on something different and heroic which would be science fiction too and I got all that in The Ion Age. For now its all I want.

Q. What is your favourite race found in miniatures?
A. Trolls are awesome! Trolka and Trolkin in Flintloque made me notice Alternative Armies. Also, I know its not a race, but I do love Robots in miniature. Lastly I am a big fan of Oriental Myth and creatures called Naga. What's not to love about snake women eh.

Q. Can you tell us anything about any sculpting work you may be doing at the moment?
A. Right now I am working on several projects of which the lead into them are already released or will be in December and January. What can I say. Well I just finished the Snowmen that 15mm.co.uk released a couple of weeks ago and the Flower of Evil this year too. The Cryptmass House for Flintloque is out and I am working on the next terrain release for Alternative Armies, another building. But most of my sculpting work at the moment is for The Ion Age. Rumours about the Duxis Battlesuit are true its coming early next year and its the most complex design I have done so far. That and more packs to expand the range including 15mm and 28mm scales including a limited set of Pistoleers and a female character pack called 'Ellen and Ripley'. I have a few pictures here, have a look. 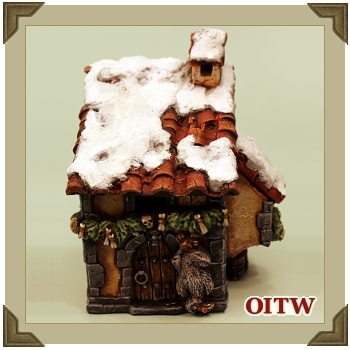 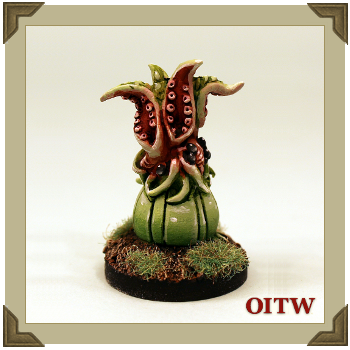 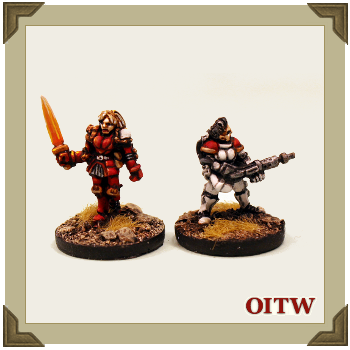 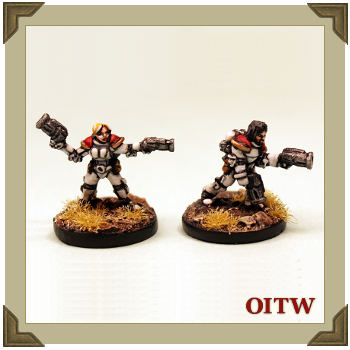 Q. Is there a website where people can see all the sculpts you've worked on?
A. Yes. Just go along to www.theionage.com and you can see a lot of my work. Also I have pieces on www.15mm.co.uk and www.alternative-armies.com too.

Q. Which do you enjoy the most sculpting, painting or gaming?
A. I would have to say its the designing, the drawing and the sculpting. Painting is good too but I don't get a lot of time to actually game. I have written some painting articles for blog posts too, you can see these on the Ion Age blog at http://theionageblog.blogspot.co.uk in the paint rack section.

Q. What is your favourite book and why?
A. I read a lot of books but I could not name a favourite but I do have a favourite film if that helps. 'Avalon' directed by Mamoru Oshii and written by Kazunori Ito in 2001. Low tech, hi tech fusion of Japan and Eastern Europe around a virtual reality. There have been a lot of movies like it, but its the best one to me.

Q. Have you ever been inspired to create something only described in written form?
A. Yes. This year I designed a great miniature kit of the Jabberwock for 15mm.co.uk's HOT range based only on the poem. Will I do it again... maybe.

Q. Have you any 'other' interests that take up your time and if so what are they?
A. A few. I read and paint, I like good beer and wine. I also like to find the Human Race fascinating and like to understand why people do the things they do. That's an interest which will never go cold!

Q. Thanks for taking the time out for these questions, do you have any final words for readers of OITW?
A. Whatever you do, whatever decision you take; take a chance. You only live once!

The above interview is an Orcs in the Webbe exclusive and was first published on December 5th 2013 as part of it's 2013 Advent Calendar.

I'd like to thank Tony Harwood for first suggesting this series of sculpting interviews and coming up with most of the questions.