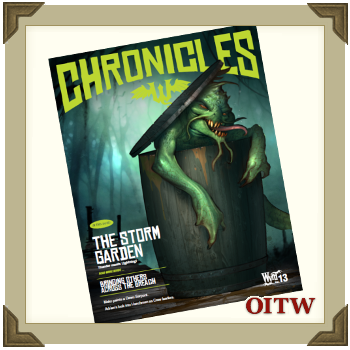 We take a look at the most recent issue of Wyrd Games' Chronicles magazine and give you brief run down of what to expect in each article.

What is OITW Written Matters? - I started Written Matters on OITW back in 2008 to let readers know what is in a particular publication and if there’s anything of particular note that I feel might be of use to it’s readers. Back then it was anything of a vaguely Blackpowder / Alternative Historical bent but now the readership of OITW has expanded so has my mini review.

My Thoughts on Malifaux

Originally started as way to squeeze all the different themed miniatures Wyrd produced into one coherent wargames ruleset, Malifaux has gone from strength to strength over the last few years. The backstory is richly detailed, well supported and continually developing - characters have lives that progress through the different editions of the rulebooks and a magazine like this helps tie things together. Many wargames these days are following a similar style, with the individual game world’s narrative developing instead of remaining static. The characters and storyline of Malifaux have tempted me many times over the years and it really should feature here on Orcs in the Webbe, one day I might start a campaign set in Malifaux - probably using Two Hour Wargames solitaire rulesets due to lack of an opponent. You can even play it on your computer via an officially released (and very polished) module for Vassal. Hmm...

Anyways, on with the mini review of Chronicles 13...

If nothing else this very small entertaining introduction highlights the mental stresses of getting a Kickstarter out coupled with the build up to Gen Con :)

A nice little piece of fiction. It features characters and a setting similar to that of a pseudo-fantasy feudal japan. The story itself is just a stand up fight really but has some things you could lift for your games.

Bringing Others Across The Breach, Michael Kelmelis

This article has genuinely good advice on how to get players to play a new game system. Obviously focused on Malifaux, but the information and methods can be transferred to other games. It gives specific examples of the different types of game that you can run at conventions / game nights along with a mini tutorial of sorts showing what order to teach the malifaux rules. A great read.

Boozed in the Bayou, N.A. Wolf

A brilliant piece of fiction. Clocking in at just over five and a half thousand words it’s a good read with plenty of ideas for scenarios. It’s (again, obviously) set in Malifaux’s universe but the combination of characters and races could easily be transposed into any setting. If you’re unfamiliar with Malifaux you could do worse than than reading this to get a flavour of what it’s about. This story alone makes the magazine worth downloading.

A single page scenario loosely linked to the events in the preceding story. It could easily be used for any wargames ruleset and includes a great table of unexpected things you can find in barrels during your wargames scenarios.

A look at how some of the Malifaux characters were promoted during the last Malifaux rules update. Primarily of use to Malifaux players but there are a few ideas you could lift for developing your henchmen and lesser-thought-of unit members.

A Malifaux Battle Report - A Great Game Across the Pond, Andrew Weakland

A well written After Action Report of a game of Malifaux. Not much there to lift for other games though. I’d love to see AAR’s this detailed for Flintloque, the minis have just as much character and special abilities too that players must have had success/failure with.

A detailed painting tutorial on a chinese dragon. It includes a lovely custom base tutorial and quite a few detailed techniques along with close up photographs. Definetely something here for any wargamer/modeller.

Even if you don’t play Malifaux there is something in this magazine you’ll enjoy. And it's free, you genuinely have nothing to loose by giving it a try.

Technical Details: A 79.5mb PDF weighing in at 63 pages. As all PDF releases should have, its table of content page is fully hyperlinked. It’s also bookmarked but with a few issues. The layout is nice and lends itself to Malifaux’s style.

Available for free from http://wyrd-games.net/community/files/category/1-wyrd-chronicles/

This review was written exclusively for Orcs in the Webbe and was first published on the 7th August 2014.