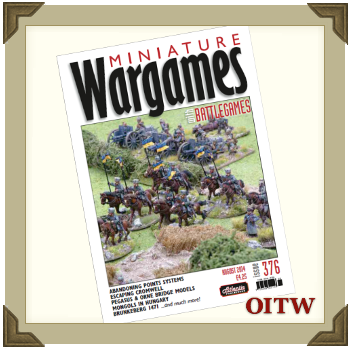 We take a look at the August issue of Miniature Wargames and give you brief run down of what to expect in each article.

Here is my quick review of the August issue Miniature Wargames, apologies for it being a month late (the September issue, 377, came out last week) but I only got a chance to sit down with the magazine over the last weekend.

This review was written on the Eurostar as I travelled under the channel in a way that still makes me think of the Stingray episodes I first saw as a child.

A nice little article about the success of wargames magazines over the years.

As always Neil’s column is a pleasure to read. First up this month he talks us through Operation Market Larden II – an event featuring the rulesets of Two Fat Lardies. Following on from this he gives a run down on the aforementioned Lardies Summer Special and their new WWII campaign book, Bashnya or Bust, both of which sound like great publications of use to players beyond their intended systems. He also looks at the free Wild West Chronicles expansion, some great looking WWII plastic buildings and Shadows Over Normandie.

Another cracking easy to follow terrain article. This month Diane walks us through the creation of an African Tembe. Her articles are brilliant, parts lists and detailed step by step instructions. The only way they could be improved are with more photos. A must have article for anyone looking at gaming in the Darke Continent.

An engaging two-fold article. The first half is a controlled rant about why points based wargames systems are rubbish. It’s actually a pretty good read whichever way you favour and the author unashamedly admits he’s biased against them but it would have been nice to get a counter-point to his comments (most of which I actually agree with, but that’s an aside). The second half of the article is a system for generating scenarios intended to give an unusual but structured battle through a series of tables. It seems a bit complex at first but there’s a selection of downloadable materials to help you out. It’s system/period neutral so is of use to any wargamer.

An unusual but good article on the perils of using eBay as your source for amassing more tiny metal men. A good read with some nice points but nothing the more web savvy won’t already be aware of.

The short paragraph intro to this article uses a word I had not heard before, Advertorial. I’m very familiar with the concept the word just sums it up nicely, an article that’s primary goal is to pimp a particular game system. That’s what this article is, but that’s not necessarily a bad thing. It walks the reader through a scenario using the rules not just giving rules advice but also tactical suggestions as well. I enjoyed the article for the most part, the scenario was engaging and did wonder how it would play out with THW’s Nuts rules but at 9 pages it felt a bit long.

A nice little cut-out and build paper model of Pegasus Bridge. Something which had a nice touch of nostalgia to it, loads of magazines did this kind of thing back in the day. The article also has a brilliant introduction on Pegasus Bridge (should one be needed) by Henry Hyde.

As usual does what it says on the tin. One thing it did do was highlight how damned good Brigade Models 2mm range buildings are.

As with last month’s column this piece felt a bit too historical and not wargaming enough. Don’t get me wrong I like to read about historical context but tempered with more gaming stuff. Also I’m primarily a skirmish wargamer and the Mongols series is definitely big battle based.

An interesting article about a little known battle from Scandinavian history. It also has a mini tutorial showing how the author built the amazing 6mm terrain he used. There are many lovely photos of it in the article too.

A single page this month on the comparative differences between detailed Wargames and fast play Wargames. Whilst sounding interesting there wasn’t that much meat on the bones of this article.

A cracking article combining history with a fun skirmish wargame. Even though it suggests a few rulesets its system neutral even giving you pointers how to use you rules to best represent the events taking place. This month’s star article for me.

An interesting article looking at how and why Wargames businesses rise and fall.

The reviews section has several big reviews in it this month, most notably  Osprey’s Across a Deadly Field which is spread across four pages,  along with the usual array of book reviews.

A nice little article extolling the virtues of wargaming using printed armies and terrain, something I’m a big fan of. It even has a link to some items that you can try out yourself.

The monthly update on the slow march to 20k.

Hmm. Overall I wasn’t sure about this month’s issue. Whilst it was a good lunchtime read (as always) it felt a bit thin on the ground. Can’t explain why as looking back over this review there’s plenty there, just not as much as previous months perhaps?

Technical Details: My Exact Editions copy is a 34.2mb PDF weighing in at 80 pages. The PDF is not bookmarked or hyperlinked, I'm not sure if that's Exact Editions or Atlantic Publishing that's to blame, but I think is a huge failing in any digital publication these days.

This review was written exclusively for Orcs in the Webbe and was first published on the 28th August 2014.