An Orcs in the Webbe Original! A fun fast paced set of rules allowing you to play buzkashi - where teams of mounted players fight for control of the decapitated remains of a goat (A real world sport! Google it). Easily adaptable for jousts and mounted melee. Complete with rules for integrating the game into your games of Flintloque 3rd Edition.

- Being the rules of the joust, buzkashi, and the grand melee -

An Original Game by Matthew Hartley 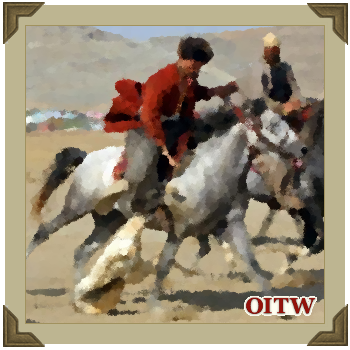 A fun fast paced set of rules allowing you to play buzkashi - where teams of mounted players fight for control of the decapitated remains of a goat (a real sport! Google it). Easily adaptable for jousts and mounted melee. Complete with rules for integrating the game into your games of Flintloque 3rd Edition.

Tilting for Pleasure is a simple, and diceless, set of rules for games on horse (or wolf, or riding lizard).

Each player will need a suit of playing cards numbered 1 to 10 (excluding the court cards and joker). This suit of cards is the players hand and is used to determine movement and resolve combat. More than 4 players can participate in the games, but all playing cards must be the same size and shape. Each player will also require an appropriately mounted figure – the game scale is flexible, so 15mm cavalry figures are fine as well as the more traditional 25/28mm.
Buzkashi games also require a 1 inch circular counter with a corpse on it (traditionally a calf or goat, but hobbits are excellent ), a 12 inch ruler (not a goblin) and two 2 inch circles.

The game is played in a series of turns. Each turn has three identical phases, each with 2 sub-phases.

The turn sequence is:

At the beginning of the game, each figure must begin the game on a face-down card of the players choice. The figure must be facing towards the short end of the card and it must be clear to all players which direction the figure (and card) are facing.

In the Play Movement Cards phase, each player may place one card face down in front of the card currently holding his figure, or the next card in the figures movement sequence. This placed cards short end or short end corner must touch the front of the preceding card , but can be orientated by up to 90 degrees to either the left or right of the first card. This allows for a turn of up to 90 degrees per card placed. 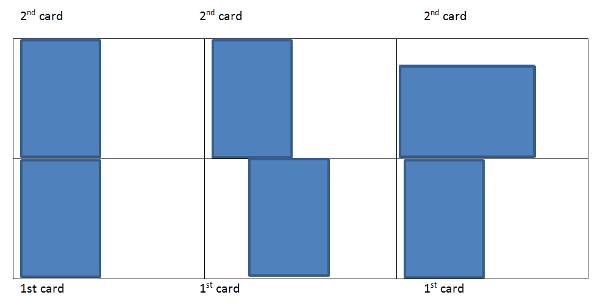 All the above are legal positions for the second card.

Each player plays one card, face down, in turn starting with the youngest player.

Players do not have to place a card but may instead opt to pass. A player who passes may not play another card that phase.

No player may place more than 4 cards in any phase.

Cards from the same player or other players may cross over each other.

Each player moves their figure from one card to the next one card at a time until they end that run of the cards they have played in that phase.

If figures end one cards movement on an opponent’s card which is also occupied by that opponent then there is a fight between the two figures. The cards are flipped over and the values of the cards compared, aces counting as 1. The lower score is subtracted from the higher score and the difference is the damage inflicted on the figure with the lower score. Each player has 10 damage points and when this total is reduced to zero that player is out of the game.

If either player survives the combat, he may continue to move to the next card in his sequence.

If there are more than two figures with overlapping cards in the same space, then the values of the cards for players on the same side are added together and combat resolved as above.

If there are players from 3 or more sides on the same overlapping cards, then the player with the highest value card wins and after comparing his card’s value to the next highest card, may distribute damage to the other payer’s figures as he sees fit.

If a figures card overlaps the Buzkashi corpse, the player must move the corpse counter a distance in inches (in any direction but in a straight line) equal to the value of the card. Should the counter land partly or wholly within the opponents circle a goal has been scored.

If more than one figures cards overlap over the Buzkashi corpse, the player with the higher value card may split the difference between his card value and that of his opponents between damage to the opponent and inches moved for the Buzkashi.

At the end of the phase, once all movement and combat has been resolved, players collect up the cards for their figure, except the card on which the figure currently stands, and set them aside. Players then move to the next phase, playing cards from their hand as described above, until 3 phases are completed.

Once three phases are completed, all set aside cards are returned to the players hand except the card on which the figure currently stands.

A next turn then begins.

This is the simplest form of the game, where two players are set up opposite each other and move in a straight line directly towards each other, combating once (unless a player moves aside – the coward!). Passes continue until one figure takes 10 points of damage.

Players are on 2 opposing teams. Team size is up to you (the Afghan version of the game has 10 players a side).

Each team has a home goal, represented by a 2 inch circle.

All players on the same team set up within 12 inches of their teams circle.

A Buzkashi corpse counter is placed half way between the two goals.

The aim of the game is to score as may goals as possible by placing the corpse counter in the opposition goal, using movement cards as described above.
Once a goal has been scored both teams return to their initial set up positions with full hands of cards.

Games can end after a set number of goals have been scored or a pre-agreed amount of time has elapsed.

An all-against-all fight with the winner being the last player standing.

Players start the game around the edge of the area.

A Tilting for Pleasure Rules Supplement by Craig Andrews

Incorporating Flintloque 3rd Edition into you games of Tilting

It is very easy to adapt Tilting for Pleasure for violent sport skirmishes on Valon. As Matthew suggested above, you can use a deceased soldier marker instead of the counter representing the goat (I favour the dead dwarf myself).

You can use any mounted Flintloque miniatures, I recommend any of the mounted personalities. Who wouldn’t want to see Queen Maria of Al-Garvey Tilting against Ferach Marshal Galahad Ney…

Now you can just leave it there, and use Matthew excellent (and better laid out) rules above. However, below you can find my musings on tieing things a bit more into Flintloque 3rd Edition mechanics. They are just suggestions. As always, the key to everything here on OITW is having fun :)

Create a roster/stat card for each character using the 3rd Edition rules as normal or use the stats for personalities for any of the Flintloque Limited Edition miniatures (many of which can be found in the excellent Flintloque rules supplement, The Rarest Tin).

Instead of allowing the youngest player to go first, you can roll for initiative as normal, using all the modifiers, if you want. This could work well for teams – Sharke’s Rifles vs Obidiah’s Cavalry...

I suggest the number of cards a player can play each phase is represented by the first number of the Quick March stat of the creature being ridden (easily found on the Master Mounts Table).

There are still only three phases in each round and the used cards are collected at the end as normal.

When combat occurs with two (or more) characters with overlapping cards each player makes a standard Flintloque melee roll. As well as the modifiers for the riders experience, race, outnumbered etc you also add the melee modifier for the creature being ridden (hence why there might be a few Rhino Tilting out there). Whoever has the quickest mount gets the Initiated Combat modifier (+1) Now you flip the cards as normal, the difference between the cards is how committed to the tackle and skilled at Tilting the character is and is used as a modifier for the Impact for the Steady Check the loser of the melee. Don’t forget though if fighting over the Goat/Halfling/Dodo the character that wins the melee roll can split their card between attack and hitting the ‘ball’ towards the goal

e.g. Wheeling-Turn takes on Mordred in a heated Tilting match. They both finish a phase on overlapping cards and must make a melee test. Mordred’s player rolled badly and has a meagre 3 against Wheeling-Turn’s somewhat more impressive 9. Usually Mordred would make a Steady Check with a -6 modifier representing the Impact (which would smart quite a bit). However, this is Tilting. Now the cards are flipped and Wheeling-turn reveals a lowly 2 as he’d played all his good cards earlier in the round, Mordred has played a 10 meaning he has to make a Steady Check with modifier of +4. Looks like he might be okay after all.

As a slight amendment to above you could play it so that if after the cards are flipped the Impact is reduced beyond 0 that the character who won the melee actually loses and must make an immediate Steady Check using the modifier as his Impact. Whilst this is the same as adding it earlier in the sequence it makes the game more cinematic giving an extra layer to tackles.

There are too many special abilities and magick spells in Flintloque to adapt them all to tilting here but I heartily recommend looking through them before play and agreeing with your opponents what effect they’ll have in game.

Using these rules there is nothing stopping you using characters on foot, be it from the game’s beginning or if a mount is unexpectedly hit by a lightning bolt or mysteriously shot by an onlooker. Just use the first number of the characters Quick March stat for how many cards they can play each phase. A dismounted Halfling might just be in with a chance against an Elf on horseback, nippy little buggers that they are...

As you can see the possibilities are endless for adapting the above, not just with Flintloque either. The rules are fast and fun. Enjoy!

This article was written exclusively for Orcs in the Webbe and was first published on the 1st December 2013 as part of it's 2013 Advent Calendar.