Dresda was Created by Mac Coxhead and Steve Blease* 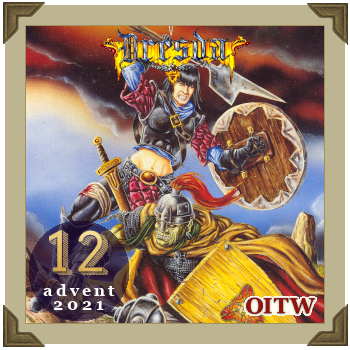 Learn the history of the Human occupied Middle-Lands and how the cycle of death started in poor, doomed Dresda.

Human history begins with the founding of the Thirteen Cities in the hitherto sparsely populated 'Middlelands'. These cities bore names alien to Valon.

The Middlelands had long been a disputed 'neutral zone' between Valons' more ancient cultures. It was a wilderness where conflicts flared, wars were fought and futures decided, and the appearance of a few settlements of some odd cross-bred Elf/Dwarfs did nothing to change the habits of millennia. In the course of just a few decades the original Thirteen Human City-Princedoms were reduced to but seven.

Parrie, the City of Poetry, was crushed by the Elves.

An invasion by the Hob-Goblin Khan razed grey Londern to the ground.

Domed Minska became a ghost-city on the edge of the Witch-Lands, and of its' lost inhabitants none now dare speak...

Austere Bellin found itself in the path of a Dwarvish March against the Elves, and foolishly attempted to charge a toll...

Budapesh, City of Bridges, was pillaged and burned by Ostarians, and its' survivors sold into Goblin slavery.

Lastly Roama succumbed to a natural death, built as it was atop a volcano's caldera...

The rest of the Middlelands have returned to Wilderness, although trade caravans, guarded by regular, militia or even mercenary troops make their way through countryside preyed upon by the bandits, raiders and warbands of every race on Valon.

For as long as memory endures, the Orcs have been Horse Guardians, warding the great herds as they roamed across the Eastern plains. It is their raison d'etre and the source of their hatred towards all races which use the horse as a beast of labour, or a source of food.

Then, a fateful ten years ago, long-term variations in the climate of Valon brought the migrating Horse-Herds to the gates of the Human City-Kingdom of Dresda, and its' unlucky inhabitants to the attentions of their Orcish herders.

That first encounter was a catastrophe for the city. Its' defences proved futile against the massed power of the Un-Men, and the city walls fell. As the Orcs swarmed through the streets, looting and killing, the Royal Family and a few retainers managed to escape through a secret tunnel, and fled west to Antwerpen. Of the rest of the population of the city, only a
pathetic few survived that now legendary carnage and slaughter.

Thus it was that Otto III, Prince of Dresda, spent that summer raising an army with which to oust the victorious Orcs from his City. From other Princes he received levies of men, horses and financial aid. The Doomgarde, the finest mercenary warriors on the continent, set aside their fees and offered their swords to Otto. And so, in the late Summer of that same year the biggest War-Train yet seen in Valon set off for Dresda, complete with baggage, followers and an unshakeable belief in the superiority of Humanity.

But with the onset of Autumn and the first frosts the Horse-Herds moved once again, turning south in search of lusher pastures and warmer climes. And with them went all but the old, the sick and the lame of the Orcish host, and it was these invalids who were set upon by Otto's army. For the second time in a year the streets of Dresda ran with blood, but this time it was the black blood of the Orcs. Otto had won a great victory, or so he thought, unaware of the mass migration which had preceded his arrival.

Thus, ten years ago began the cycle which still endures today: Each Spring, Prince Otto is forced from Dresda, with great loss, by the returning Un-Men. Each Summer he raises what forces he can in order to repossess his City. Each Fall he marches, in blood, back through the gates of Dresda.

Each Winter he awaits the first flowers and another inevitable defeat.

Dresda was the original sister game to the first edition of Flintloque, released way back in 1996. It used the fantasy range of miniatures available from Alternative Armies and brought with it an excellent and dynamic campaign system. It also shared the same central mechanics as its older sibling. This meant we we could run games that pitted fantasy armies against Blackpowder armed Orc redcoats and see the new order on Valon storm the castles of the old.

The game saw players managing bands of mercenaries, trailing the countryside looking for work and running up against other units with the same idea. Like Flintloque, scenario driven battles were a key element in its design, coupled with the roleplaying aspect of running your unit including equipping them with things found on the battlefield and paying them from a limited supply of Groats. It was more involved and offered a richer campaign framework than most wargames from that time. A few years later Games Workshop's Mordheim came out and the world was wowed by its innovative use of warbands and campaign tracking which Alternative Armies had actually been doing for  few years already.

Dresda remains a fantastic game and this Christmas Orcs in the Webbe is pleased as punch to bring it back to life once more, along with full notes on how to run it alongside your third edition games of Flintloque.

“Beausoliel - Magikaria and Myths” was originally published in the Dresda Rulebook in 1996. It was first added to Orcs in the Webbe on the 15th February 2006.

However, it was absent for many years due to a prior regeneration of the website not transferring everything over correctly. This wrong has now been righted and it returned as the twelfth entry in 2021's Advent Calendar as is, of course, part of Orcs in the Webbe's ongoing Flintloque Archive Project.

* The full acknowledgements for Dresda can be read here on Orcs in the Webbe.

** Loosely based on words I wrote when I released Dresda digitally on v4 of Orcs in the Webbe back in 2008.