"Of the Creation of Valon"

A Small Piece of Dresda Fiction

Dresda was Created by Mac Coxhead and Steve Blease* 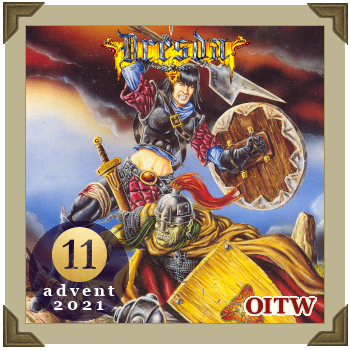 This small piece of fiction details some of the myths of the World of Valon long before Blackpowder reigned.

"The Elves tell of the Creation of Valon. It is but a story of the Elves".

"The Dwarven Lore-Wielders tell tales of a time before the coming of the Elves when Landhorn, the Dwarf-Father strode the newly-formed continents of Valon. It is only a tale of the Dwarves."

"Around their camp-fires, the Orcs tell their stories of a time before time, when the whole of Creation dreamed the same dream. It is the story of Valon."

"The Humans are aware that their time on Valon has been brief, and their struggle is to ensure that they endure long enough to invent myths..."

Dresda was the original sister game to the first edition of Flintloque, released way back in 1996. It used the fantasy range of miniatures available from Alternative Armies and brought with it an excellent and dynamic campaign system. It also shared the same central mechanics as its older sibling. This meant we we could run games that pitted fantasy armies against Blackpowder armed Orc redcoats and see the new order on Valon storm the castles of the old.

The game saw players managing bands of mercenaries, trailing the countryside looking for work and running up against other units with the same idea. Like Flintloque, scenario driven battles were a key element in its design, coupled with the roleplaying aspect of running your unit including equipping them with things found on the battlefield and paying them from a limited supply of Groats. It was more involved and offered a richer campaign framework than most wargames from that time. A few years later Games Workshop's Mordheim came out and the world was wowed by its innovative use of warbands and campaign tracking which Alternative Armies had actually been doing for  few years already.

Dresda remains a fantastic game and this Christmas Orcs in the Webbe is pleased as punch to bring it back to life once more, along with full notes on how to run it alongside your third edition games of Flintloque.

“Of the Creation of Valon” was originally published in the Dresda Rulebook in 1996. It was first added to Orcs in the Webbe on the 15th February 2006.

However, it was absent for many years due to a prior regeneration of the website not transferring everything over correctly. This wrong has now been righted and it returned as the eleventh entry in 2021's Advent Calendar as is, of course, part of Orcs in the Webbe's ongoing Flintloque Archive Project.

* The full acknowledgements for Dresda can be read here on Orcs in the Webbe.

** Loosely based on words I wrote when I released Dresda digitally on v4 of Orcs in the Webbe back in 2008.