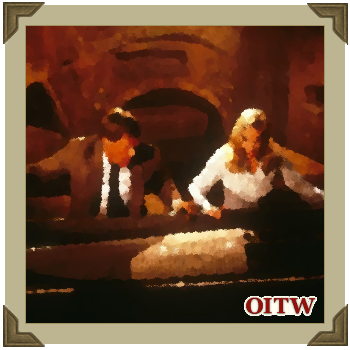 Full rules for using Clue tokens as objectives for both players and PEFs in your Reaction System games.

In most wargames without a GM or Umpire the final objective is either already in play or randomly detemrined at a set point. The following rules try to represent times when the player and the PEFs are both searching for clues that will uncover a final objective. They are purposely vague and although they were designed with Two Hour Wargames' Reaction System series of games they should be usable in any game with a little tweaking.

Set up play as normal, you will need to have separate Clue markers in addition to PEF's, say 5 or 6.

Spread them around in likely places on your tabletop. For example, in a game based in an old mansion you could place them one in the library, one in the lab, one in the dungeon etc. The positions should depend on the scenario you're playing as well as the setting.

Each turn you have the PEFs move to collect the clues. If using either of the Chain Reaction rulesets on the PEF Movement table you could replace 'nearest PEF' and/or 'nearest enemy'. The player can search for clues as well. Depending on the size and nature of the clue you can consider it collected if seen, perhaps LOS at least 4" away or for a more detailed search, such as a book that needs reading or a chest of drawers that needs searching one (or more) full activations in base to base contact.

You can play it that once found the clues are removed from play or placed on the PEF, representing something that must be found and carried such as a key, or simply note that the PLayer/PEF has seen the clue, perhaps representing a mural or sign on a wall.

Once found PEFs will carry clues around with them. If that PEF is later revealed to have been a dummy PEF and was carrying removable clues simply play it as if you have received bad information about who had what and put those clues back where they started.

Whenever a PEF or the player collects 4 clues (this number can be modified for longer/shorter narratives), the OBJECT has been located. You can then either randomly determine where it is on the table with some sort of dice roll/grid system.

If playing with a hidden objective, once any PEF or party has 4 clue tokens they can move towards the OBJECT to recover it. In this case if a PEF with four Clues reaches the OBJECT you have been badly caught out and its game over.

If a party with four clues reaches the OBJECT then that party wins the game.

If the game is part of a campaign then the next mission would have the losing side trying to steal the OBJECT from the winning side.

You can use the above rules when running a more scripted scenario by placing the objective where needed. This can represent a location that is known to the sides at the start, such as a locked door to a cellar etc, and it can only be bypassed once the requisite clues are collected.

Special thanks go to Bob Minadeo for creating the excellent Clue token rules above as they really do expand the ways in which Two Hour Wargames Reaction System games can be played.

“Clue Tokens” were first used in “El Lupe’s Secret Passage” which was written exclusively for Orcs in the Webbe and was first published on the Friday the 10th January 2014.