Master modelmaker Tony Harwood brings us a conversion and painting article showing us how to create some unusual allies for your Bog Orcs in your games of Flintloque.

A leprechaun is a type of fairy in Irish folklore. It is usually depicted as a little bearded man, wearing a coat and hat, who partakes in mischief. They are solitary creatures who spend their time making and mending shoes and have a hidden pot of gold at the end of the rainbow. If captured by a human, the leprechaun has the magical power to grant three wishes in exchange for their freedom. Like other Irish fairies, leprechauns may be derived from the Tuatha Dé Danann. 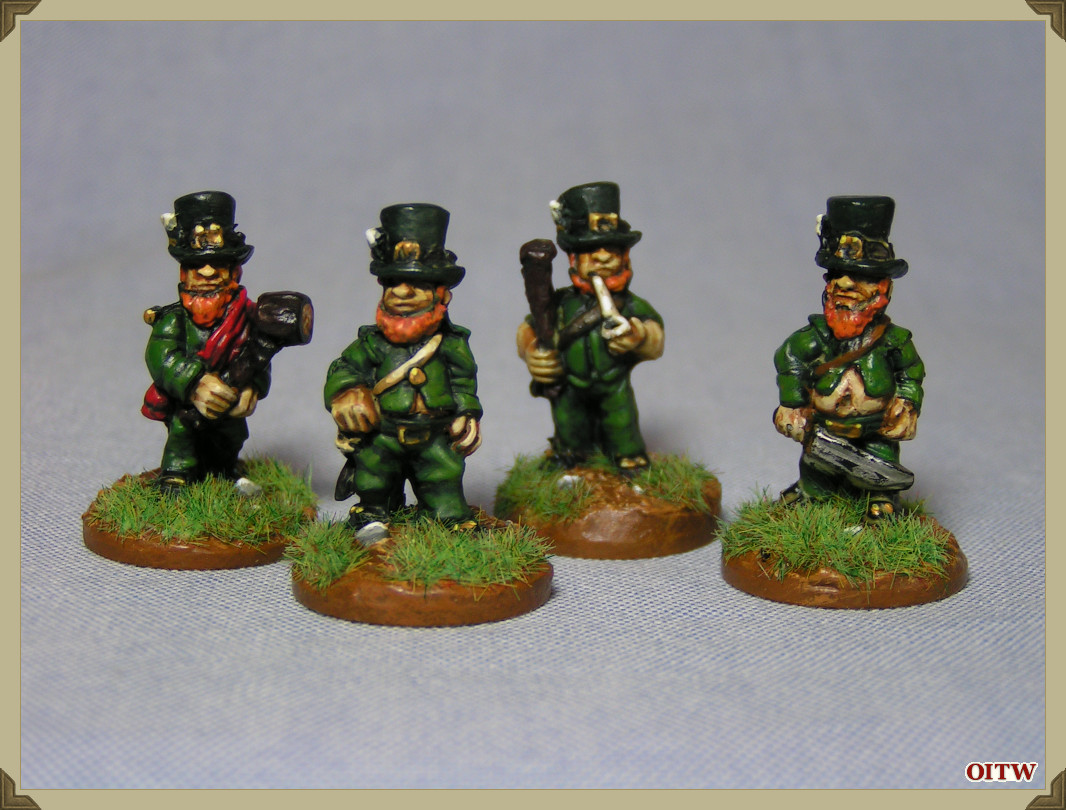 This is not an original idea as I have seen others convert Flintloque Halflings in to Leprechauns on The Notables Yahoo site. It is however a project that I have wanted to do for some time. 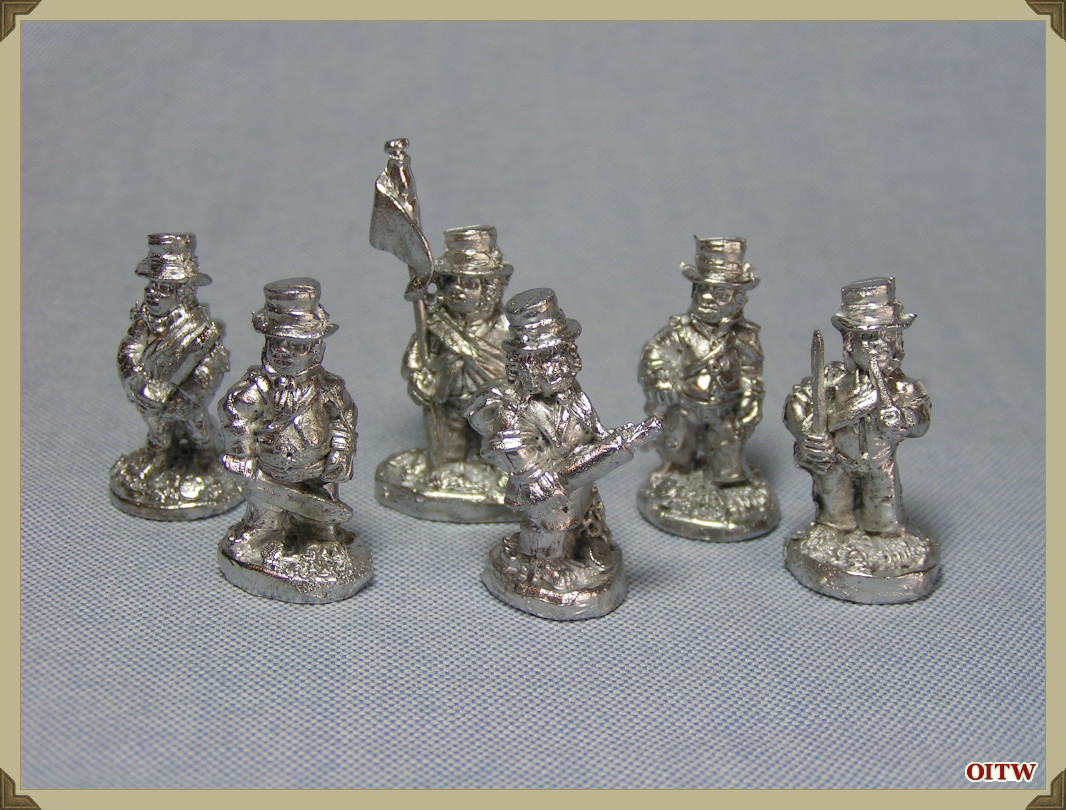 Earlier this year I ordered a set of 1st HEVC Foot (57001) from Gavin at Alternative Armies. 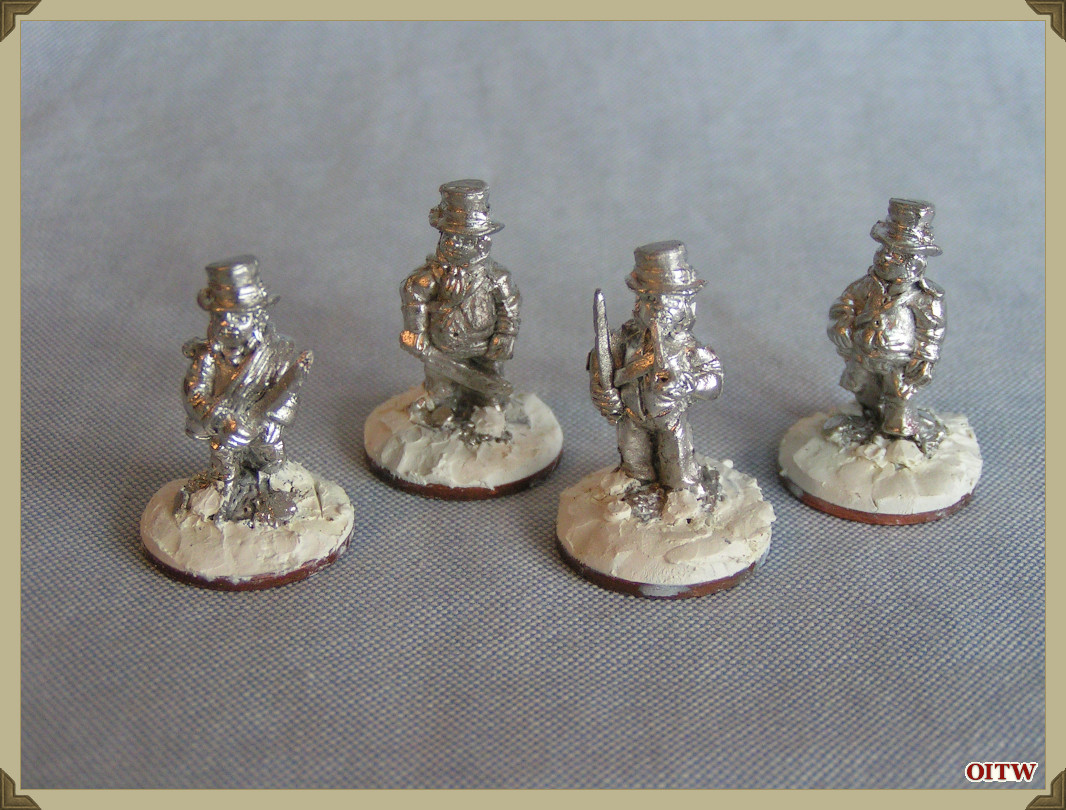 Four Halflings were mounted not on to my usual 2p coins, but some 1p coins instead. It is worth pointing out that some time ago I produced a Workbench Article for The Miniatures Page (TMP) painting up a group of similar Halflings. You can find the full article here. 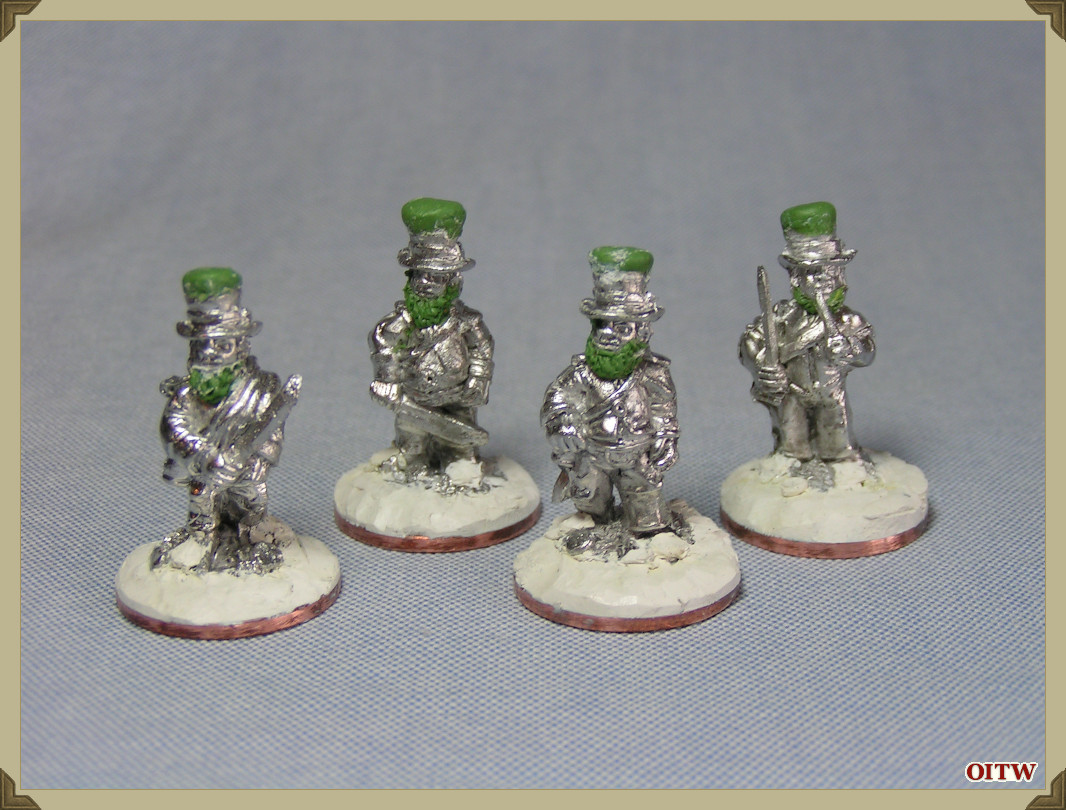 The bases were built up with Milliput epoxy putty. 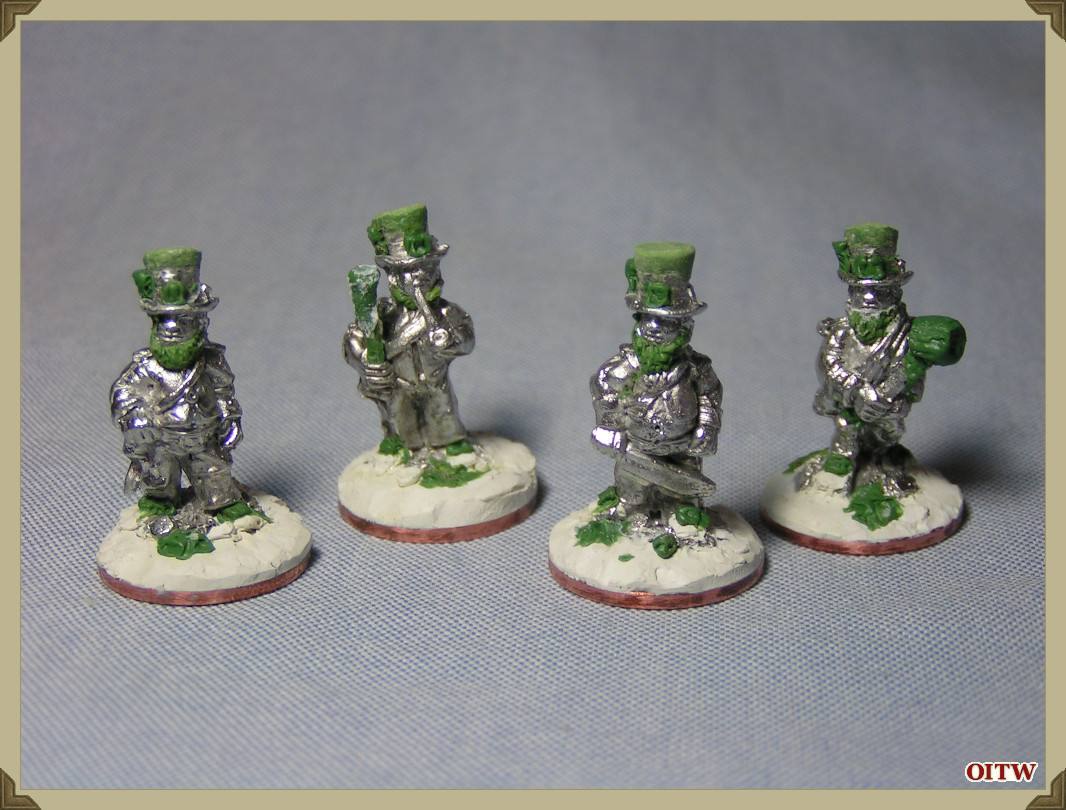 I did a Google search for images for Leprechauns and realised that there were a few stereotypical characteristics. A tall top hat, orange hair with full beards, green suits with yellow or gold decoration, buckled shoes and the Irish club or shillelagh.

In this image you can see how I have modelled these features. 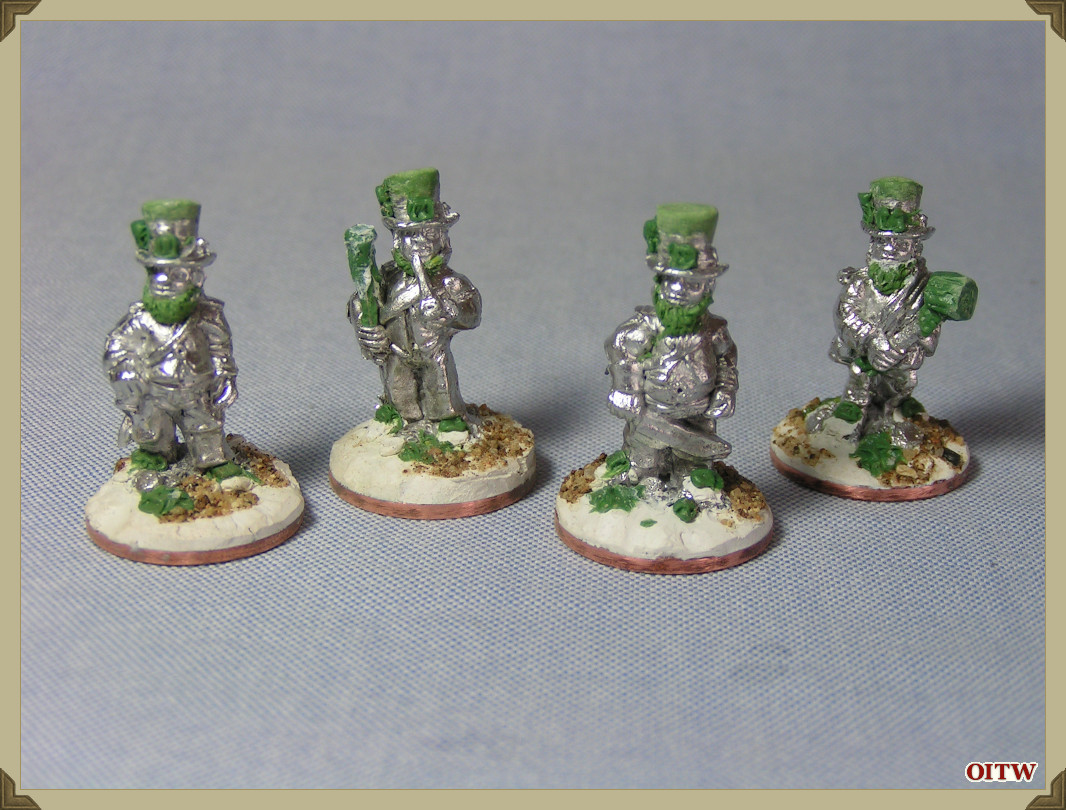 The bases were further detailed with some sieved stones glued in place with uPVA glue. 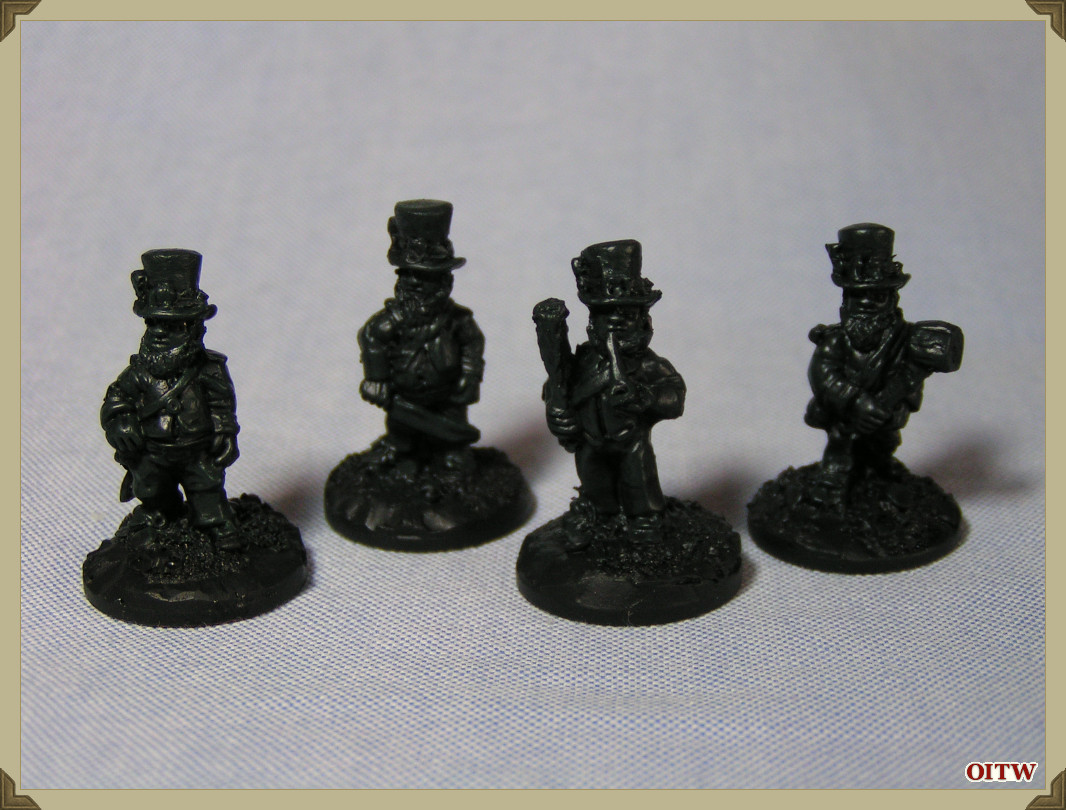 The converted models were undercoated with Chaos Black from GW. 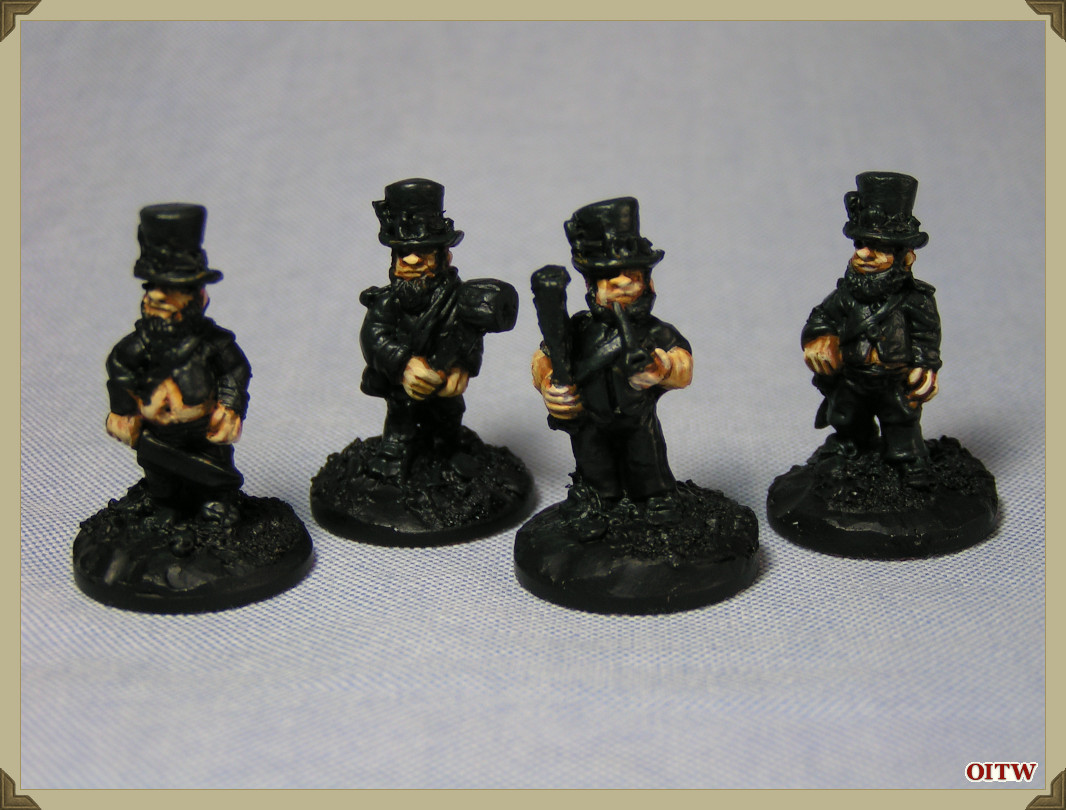 The first real painting was the pale flesh. I built the colour up from Snakebite Leather and highlighted with a Snakebite/Skull White mix. When the paint was dry, I washed the areas with the Flesh Wash from Citadel. 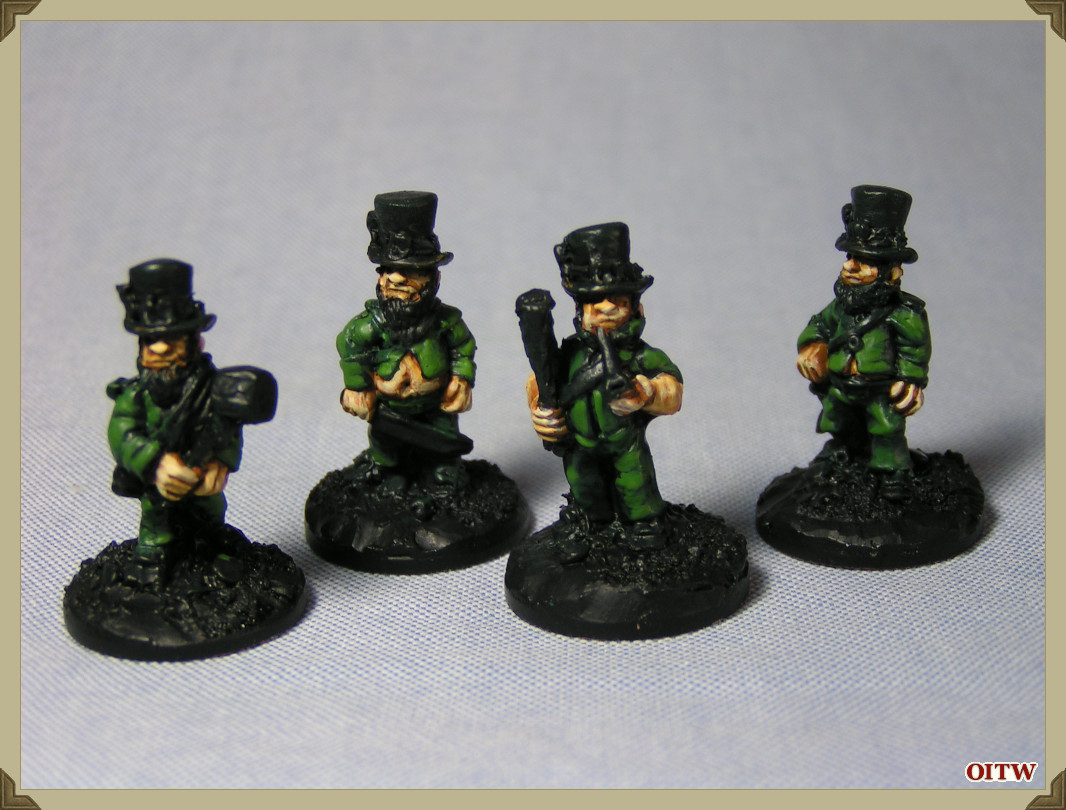 The Green uniforms were painted Forest Green and highlighted with a touch of Yellow to give that typical Irish Green. 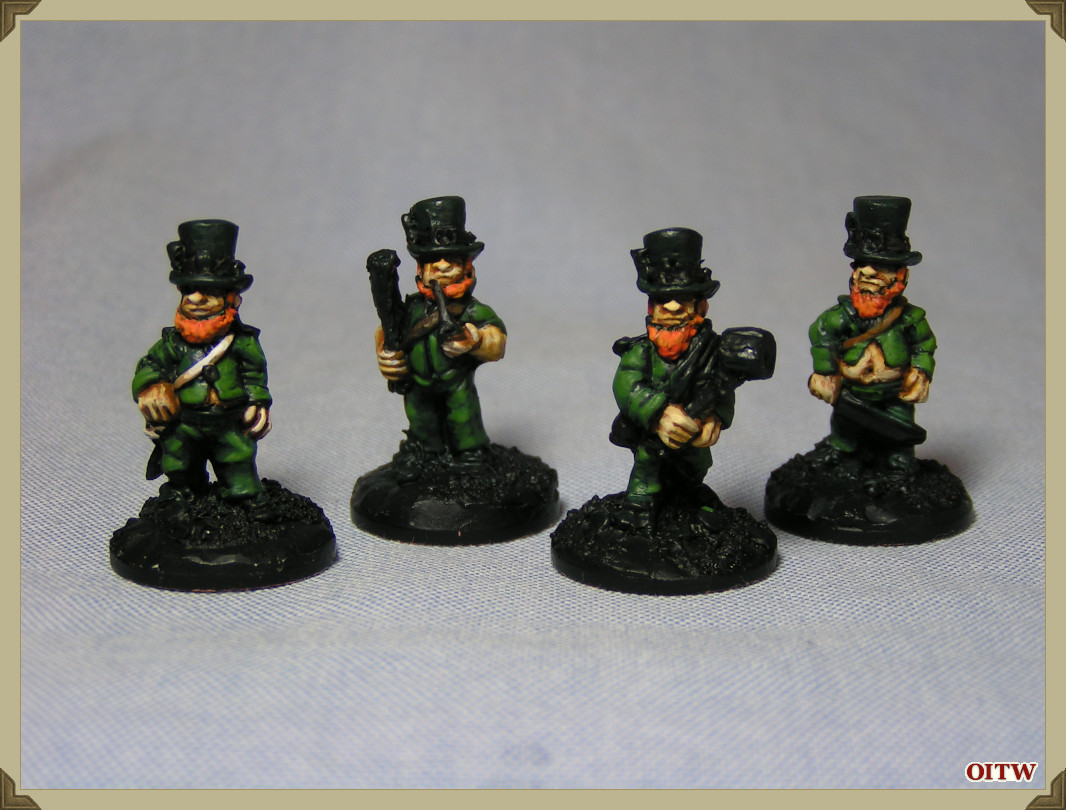 The beards were painted orange. This has always been a difficult colour for me. I find that I can never quite judge the tone. With these bright Orange beards, I chose Hot Orange from Vallejo and highlighted it with Badmoon Yellow before washing the beards with a Baal red wash.

You can also see that I have started to pick out odd strapping with either Brown or White. 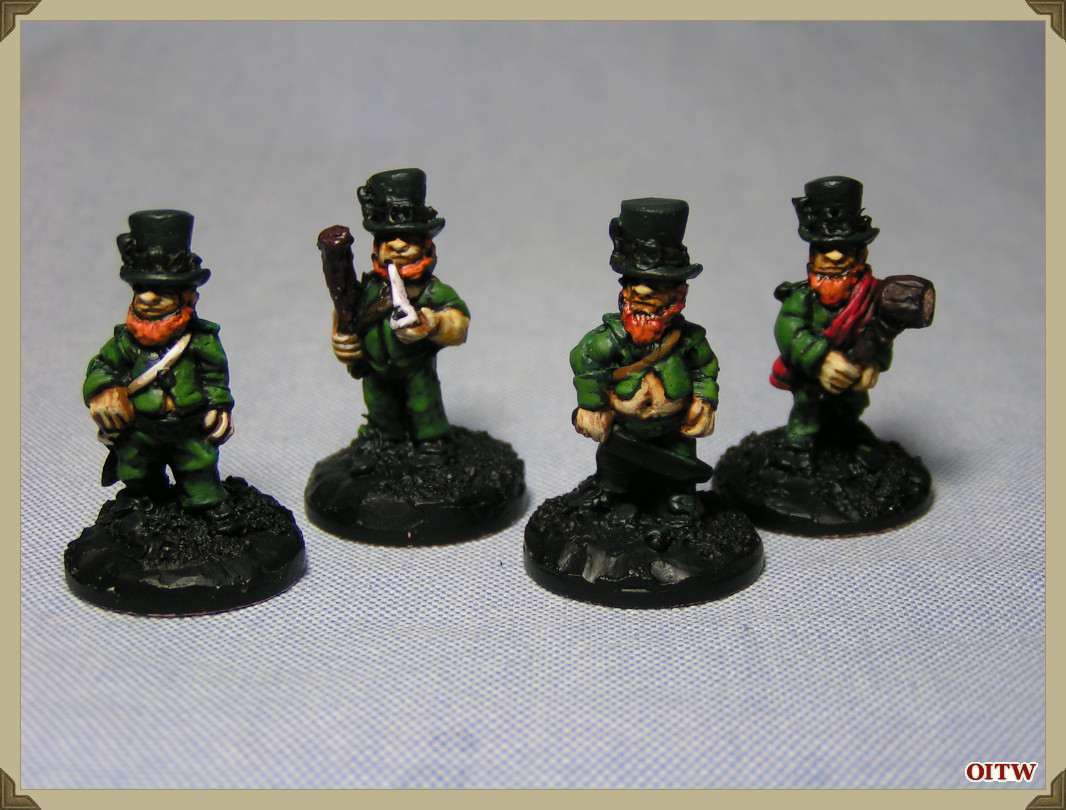 More detail painting. Picking out some of the equipment with Reds and Browns. The Irish Shillelagh was painted very dark brown with some cream wood grain showing through. 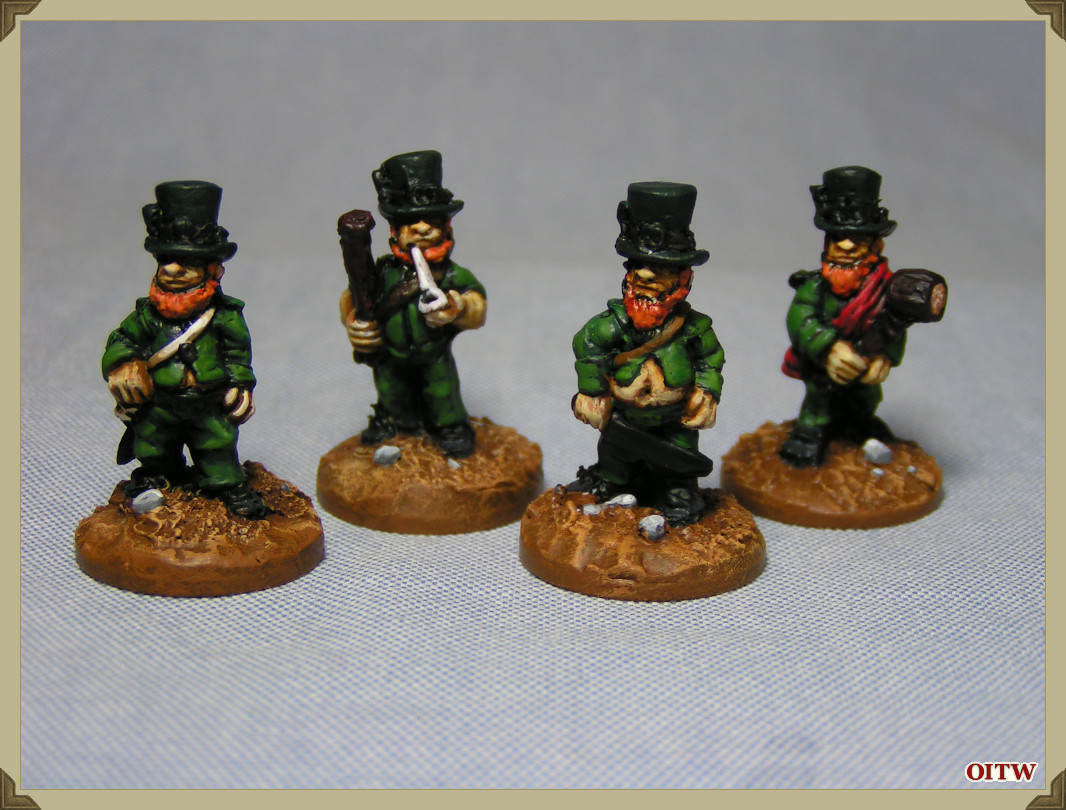 The bases were painted in my usual Snakebite Leather and highlighted with Snakebite and some White. I like to pick out the odd stone with grey. 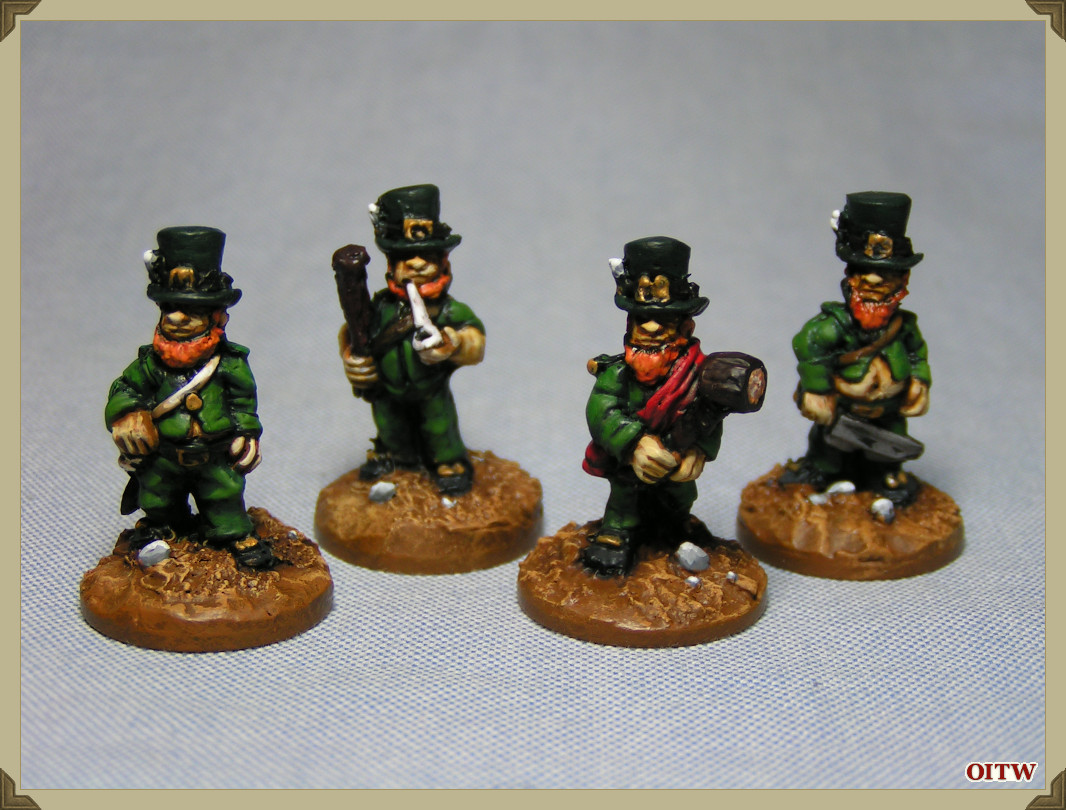 The larger top hats were painted in a very dark green – almost Black colour with the prominent gold buckles picked out in Gold, highlighted with a tiny touch of yellow.

The shoes were painted dark grey and the buckles painted the same as the ones on the top hat.

I choose to add a small white feather to the hats, something I had seen on illustrations of Leprechauns.

Any other detailing was added at this time. 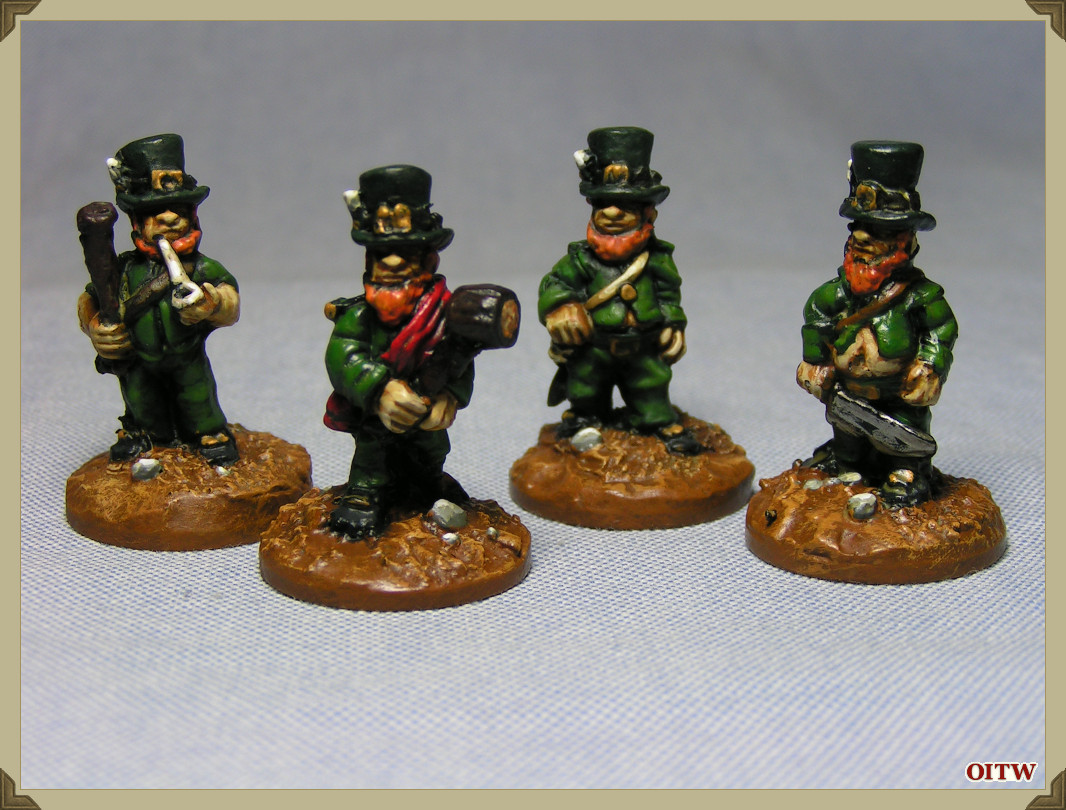 The miniatures were varnished. First with Ronseal Hardcoat Gloss and then some Galleria Matt varnish. 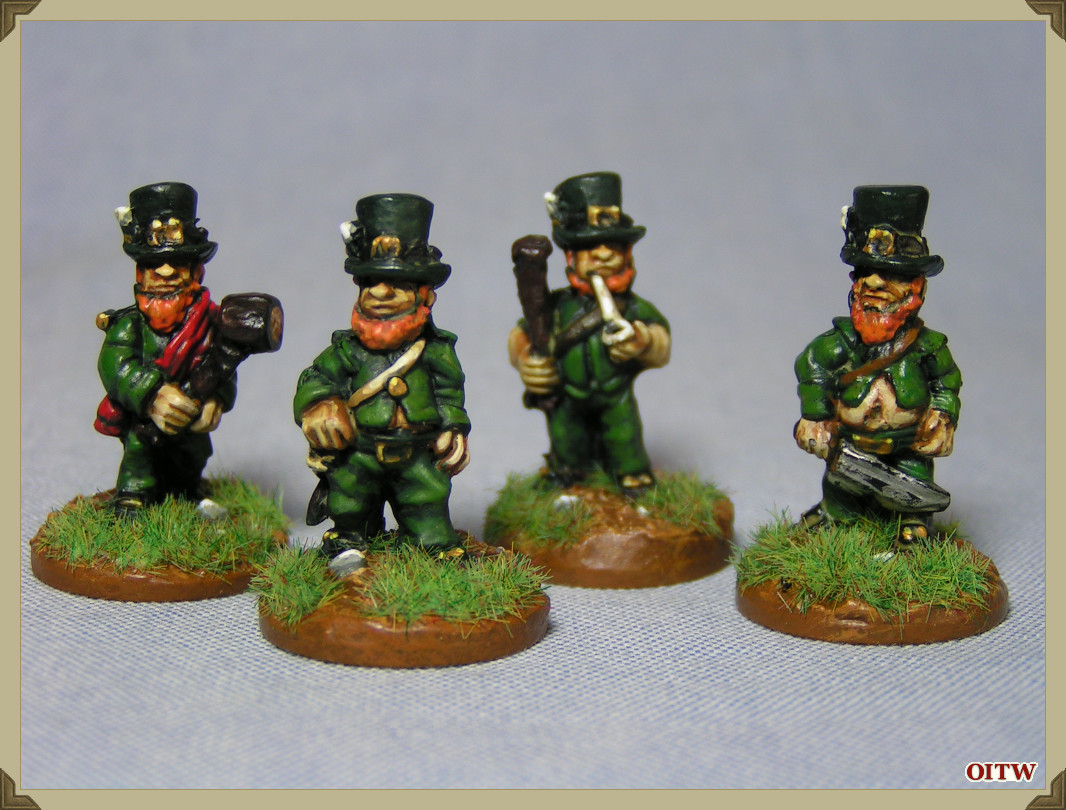 Before the bases were flocked with some static grass. 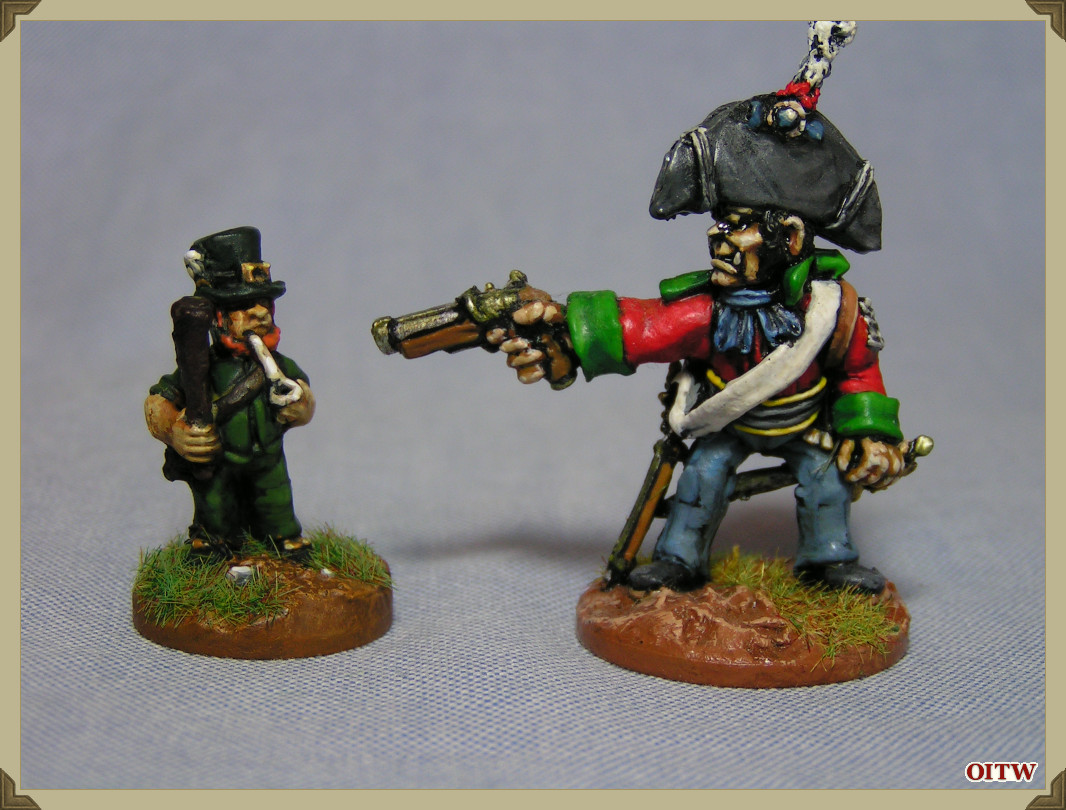 The last two images show these diminutive characters alongside some more substantial Flintloque Orcs to show the difference in size between them. 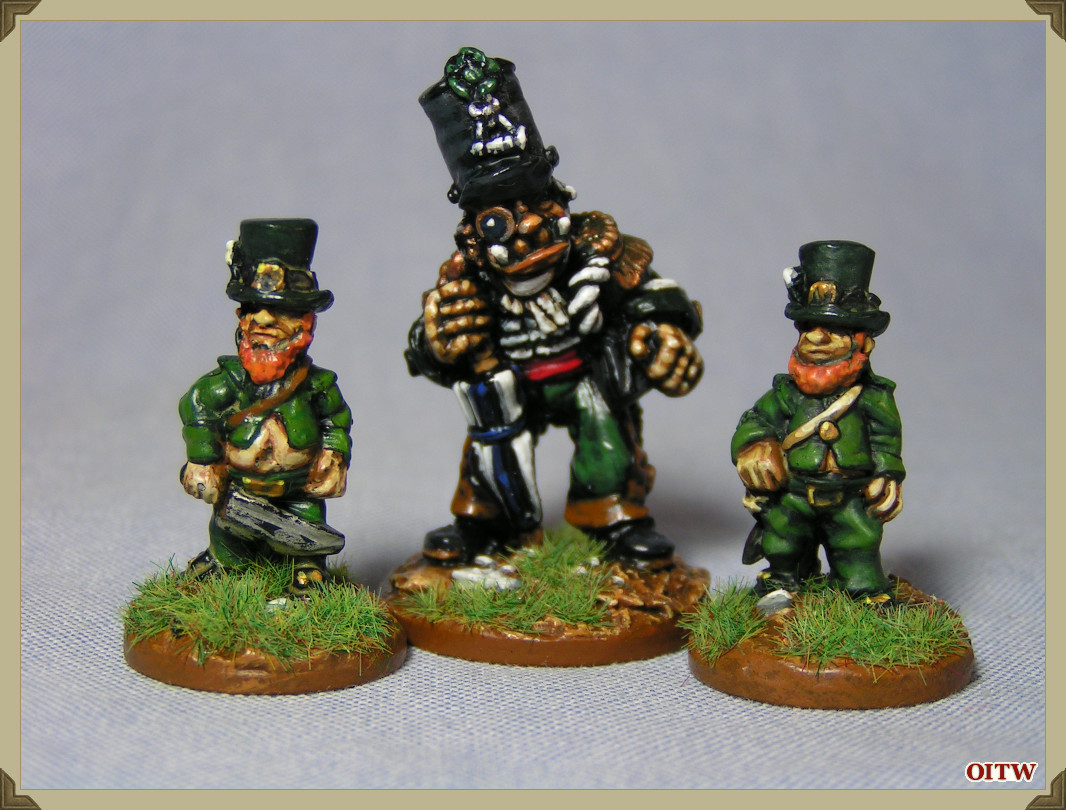 The Leprechauns were great fun to paint, but I have no idea as to how they are going to be used in play?

To see the complete many and varied terrain and painting articles by Master Modelmaker Tony Harwood, along with his excellent Flintloque scenarios simply click on the  maroon tag  just below and to the left.