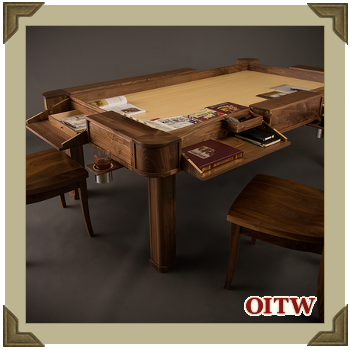 A humorous rundown of the different types of games masters and players you might encounter whilst gaming...

Which one are you?

I facilitate a shared storytelling experience that I like to call Consensual Fictioneering. I don't like dice or systems. My stories involve death, unrequited love and childhood trauma. Characters in my games are likely to be pale and wear a lot of black leather. Total immersion role-playing is encouraged, with a full-fledged screaming argument in-character representing the summit of my storytelling aspirations. I run these games at conventions to meet girls.

I only run classic D&D type games. Squared paper and multi-faceted polyhedra are my tools. On the wrong side of 30, I often casually namedrop playing Gary Gygax's original Chainmail game in 1974 at the age of 6. There are mouldering piles of ancient TSR, Avalon Hill and Flying Buffalo products lurking in the corners of my forbidding flat. Peckforton Castle, Bedbug Island and Ballastor's Barracks are Names of Great Power for me. I can remember Dave Langford's first book review column. Games run by me revolve around underground complexes randomly populated by 2d6 Orcs playing dice in sealed rooms with no food or water. My greatest thrill is rolling "20 - DM's choice" on the Wandering Monster table.

I'm a Keeper of the Flame.

I run old, half-forgotten game systems that no-one else plays anymore like TORG, Pendragon and TSR's Marvel Super Heroes. I insist that they're really good, but have to admit that my friends only play them because they can't be bothered to run anything themselves.

I have an enormous repertoire of richly developed supporting characters for my players to encounter. Each has their very own voice and probably facial tics too. I enjoy showing off my favourites to the players, and making sure they realise how great I think my creations are. Plot and player actions come a distant second to me exercising my vast array of cameo appearances at every opportunity. I like to base my characters on obscure walk-on parts from movies and TV shows that nobody likes or remembers.

Similar to the NPC Wrangler, I have developed a fully fleshed-out campaign setting. Every house and shop in town is mapped and described in painstaking details, from the number of sacks of grain in the feed store to the inscriptions on each cemetery headstone. I like the players to wander around the setting I have created, hoping they will stumble across a thinly thought-out adventure hook, or more likely, get bored and make one up themselves (this often involves a bar-room brawl and a fascinating tour of the local incarceration facilities).

I've designed a fantastically convoluted storyline for the players to utterly ruin when they kill the vital contact or call in the police instead of investigating it themselves. I will break down mid-session and sulkily declare that it's all ruined. One of the players will attempt to mollify me by pointing out it's a great story, just not a great game.

Related to the Plotmeister, I too have a great story to tell, but unlike my weaker cousin, I have the strength to bend the players to my will. Through a series of scene shifts, deadly curses, in-game coercions and other deus ex machinae, I will subtly and not-so subtly ensure that the pitiful pawns who play my game end up exactly where I want them. Too late, they will realise they have boarded the Plot Express, bound for a pre-determined outcome, with no stops en route.

I insisted during character creation that I would be accompanied by a faithful wardog, talking parrot, smartest-horse-in-the-movies. Whilst this will initially work within the first adventure, both the ref and the other players will eventually become annoyed by my abuse of this animal sidekick as a telepathic human-smart extra pair of hands to gain unfair advantages. The pet will be unceremoniously eaten by a cave troll soon after, leaving my character despondent and strangely ineffectual.

Like the Pet Lover, I insisted on a sleek and unique vehicle during character creation, such as Nightboat ("the crime-solving boat") or KIMM ("the sexy superbike"). This soon proves to be a mistake as the campaign moves the players away from the original coastal/riverside/fjord environment to a desert. The hapless wonder-machine is either mothballed indefinitely or suffers a modern fate not unlike the cave troll/pet incident.

A frustrated real-life hooligan, I have accidentally fallen in with a crowd of role players who are subtly attempting to reform me. Their efforts fall at the first hurdle when I inevitably create a warrior character with a Really Big Gun/Sword. I further exhibit my caveman roots by instantly falling upon the first female NPC we encounter and engaging in graphic grown-up naughtiness quite at odds with the game atmosphere. The other roleplayers laugh nervously at this but do nothing to curb my manly ways, as they are a bit scared of me.

I know the system forwards and backwards. I've read all the supplements and expansions available and pride myself on calculating other players' To Hit numbers without leaning over to look at the sheets. My crowning achievement is pointing out a loop or logic flaw in one of the Ref's own house-rules and hoisting them on their own petard (a 2-handed weapon which hits for piercing damage). I will eventually be brought low by over-reaching myself during an extended bout of rule-lawyering and find myself roundly humiliated by a ref who has actually read the rules.

My task is to ensure that no period of pure role-playing lasts longer than 5 minutes before I drag it off course with an off-topic remark. Last night's TV, reality shows in general and past games are popular subjects of mine. My weapons are double-entendres, catchphrases from Vic & Bob and Blackadder quotations*. The ref will good-naturedly endure my constant interruptions as the price they pay for having me on board. Besides, it is likely that I will have mesmerised the ref along with everyone else at this point, with my banal flow of Fast Show** impressions, mid-dungeon. The only cure for me is an enforced sentence as a ref myself, wherein I will be faced with an entire group of distractions of my own to deal with.
* I am obviously fairly old.
** As this amply demonstrates.

I lack the self-confidence to roleplay independently, so I habitually attach my character to someone else's. I regularly play partners, brothers, deputies or co-pilots of existing, stronger personalities. I am characterised by a lack of originality, often pinching character names from comics, TV or movies. At some point, my roleplaying 'host' will fail to turn up for a gaming session and I will be left stranded without a guiding intellect. I will eventually bond to a new host in the party, regardless of any in-game incompatibilities (such as a vampire/paladin partnership), and will continue to ride them like the bone-idle wretch I am.

Like many other players, I live for the combat. But where many of them are interested in Causing Massive Damage with Really Big Guns, I enjoy the cut-and thrust of the fight itself. A simple To Hit roll will not satisfy me until I have graphically explained my complex series of actions - each round of my character's combat will be described in fine detail; whirling, leaping, parrying and slashing. I am a fan of Errol Flynn, Oliver Reed as D'Artagnan and Jackie Chan. I'm probably a member of the Sealed Knot, and may well harp on about my 10-week fencing or krav maga course back at sixth-form college.

I've allowed myself to be roped into playing tabletop games by my boyfriend in the hope of seeing him more often. I was hoping to play storyteller games that didn't involve vast amounts of number-crunching and critical hit tables, but so far this has proven fruitless. I tend to get shouted down by the boys, who at least have the good grace to get embarrassed by their interactions with female NPCs, now that I'm around. I don't play superhero games.

My artfully compartmentalised social life has been arranged so that my beer and footie mates never meet my games and comics mates. The potential shame and social stigma of being outed is not quite great enough to force me to kick my dirty little habit. I am however sufficiently self-conscious during games sessions to never actually roleplay, contenting myself to describe my character's actions perpetually in the third person, and never engaging in in-character dialogue. I never play verbally oriented characters and would probably spontaneously combust if forced to roleplay some form of social interaction with an NPC.

I kid myself that I'm something of a problem solver or detective, suiting me amply to investigative games. In the past I have stumbled onto the ref's plot quite by accident and amazed my fellow role-players. By now I am hopelessly convinced on the rightness of my instincts, and regularly claim to have 'got it sussed' at some point during a game's first session. The ref has by now figured out my favourite 'theories', often based on my favourite X-Files episodes (regardless of game genre), and is now cunningly working me like a sock toy. Blithely unaware of this sly manipulation, I am leading the rest of the group down a plot route of the ref's choosing. I am the secret weapon of the Railroader.

I studied the character generation rules at length, in order to squeeze the maximum benefit and minimum penalty from the system. I have located one or two rule loops that give me a game-destroyingly massive advantage in a crucial element, like combat or spell-casting, making me the Best Sniper/Ninja/Hacker/Pit-Fighter In The World. The ref will gnash and grind his teeth at my impudence, but will be held at bay by my mantra of "It's all in the rules". Attempts to impose house-rules to curb my excesses will result in high-pitched whines and angry glares across the gaming table. My character will almost certainly be killed in a specially designed scenario to rid the gaming world of my disruptive presence.

I managed to spread my starting character skills thinner than butter on hot toast, resulting in more skills than there are slots on the character sheet. I have the bare minimum rank in each, but this is still enough to make me the busiest character in the game. The other players secretly hate and resent me, spending most of the level advances in getting skills better than mine. They have foolishly failed to realise that the game system in question makes skills purchased in-game much more expensive than skills purchased during character creation, and thus they will never match me. They will eventually bludgeon me to death with mini-doughnuts and other role-playing comestibles.

Hampered by poor grooming or dubious personal habits, my unseuccessful thespian leanings have been instead channelled into tabletop gaming. I insist on role-playing every encounter in-character, replete with appropriate accents, speech patterns and oaths. Less-confident refs can be intimidated by my Lee Strasberg approach to roleplaying, and start to stumble over their own NPC dialogue. I will often will tournament games at conventions, if an attractive female gamer is not around to win.

I have countless sets of out-of-date games systems displayed proudly on shelves in my bedroom. I have ferreted around the wild and lawless fringes of Ebay, seeking to complete my Dragon Warriors book set. I have the rare AD&D module "G4 - Mock-Tudor Coaching Inn of the Stone Giant Voivode", and several leather bound volumes of "White Dwarf - the Glory Years". The rest of my time is spent purchasing collectable card game booster packs, in my quest to Own Every Card Ever. I am quite poor.

This article was written exclusively for Orcs in the Webbe and was first published on the 6th December 2016 as part of it's 2016 Advent Calendar.

To find out more about Helena and her work click on the  maroon  tag  below.