A Logic Puzzle by Craig Andrews 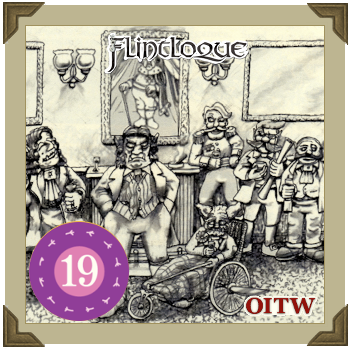 Yet Again Capturing the spirit of annuals from when you were kids, OITW brings you the inaugural Christmas Logic Puzzle, The Shooting Competition.

The Club is open to all who are suitable and of substance and in need of the latest tattle or news from our glorious city of Londinium or from the abroad fields of war. the scandal of society and the records of those captured and committed of crime.

The Notables Club draws its foundation from the Immense Conflagration that consumed old Dresda many generations ago leaving only the foundations of that poisoned place unharmed. With the arrival of muskets and powders and the loss of final Magicke. the now powerful Orcs fabricated a vast city atop the ruins and channelled the intellect that they now had into styling
an Empyre. These vallant Orcs and indeed ingenious Joccians and stout Guinaleans constructed the brightest light on all of Valon.

Their leaders and chiefs needed a place to reside and enjoy and from this came the first Notable Club. made from timber and watling walls the club was more a tavern than anything and though it was fine the destruction of the riots burned it to the muddy ground and took the life of many members. Subscriptions and indeed a fair portion of gold taken from Elven treasuries during the later Ferach Revolution allowed the erecting of a new Club in the best style of our splendid ruler King Gorge.

Notables come from all walks and places and gentle employ. having the aim of bringing wealth to themselves and order to the often coarse lanes of Londinium. Indeed punishing rascals is a sport and gambling a pleasure but truly it is the goal of destroying the Ferach that drives the Notables. Many members are abroad fighting the good fight and it is rumoured that many
more are occupied in cloak and dagger works here in Londinium in chase of the agents of Mordred.

The Notables Club holds an annnual shooting competiton in which those members that consider themselves excellent marksmen compete for the title of "Best Shotte". It is one of the highlights of the Notables year and considerable wagers are placed by the other members.

As the event has grown it has become somewhat of a tradition to start the day with a glass or two of 'the good stuff'. Unbeknowst to our Notables however, this year (due to an eregrious link in the supply chain, that may or may not go by the name of Freddy) the good stuff was exchanged for what could best be described as 'stuff' maybe even as 'the bad stuff'. As a result, the sequence of events on the day of the shooting competition became somewhat hazy as did the usually superb abilities of several contestants.

When the Notables awoke the following day no one could quite remember who actually won the competition. Given how many wagers were placed and the importance of awarding of "Best Shotte", as many a sponsorship deal awaits the winner (including free eating for the year at Mrs Migorc's (in)famous pie shop) they must find out who won as well as the scores of all four contestants.

Through careful questioning certain pieces on information have come to light.

This logic puzzle was created exclusively for Orcs in the Webbe and was first published on the 24th December 2020 as the nineteenth entry its 2020 Advent Calendar.