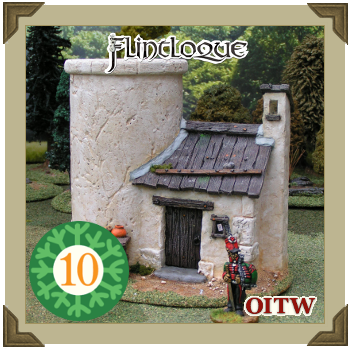 Tony Harwood's Ferach Officer, Errole Flynne, returns in this cracking tale about the oprigina of Flynn's regimental standard and its unusual properties..

In the 2017 Advent Calendar I wrote about the adventures of Errole Flynne and his group of Ferach Marines who fought for Mordred in the Great Napoleonique Wars that devastated most of Urop. In this short story I will attempt to add some character background to this noble Ferach Officer.

For more details of the first short story – A Stroll in the Park, see here on Orcs in the Webbe.

Errole was not your average Ferach noble in fact it was rumoured that he was one of the late Kings illegitimate sons who having been born on the wrong side of the sheets was ushered off to live a solitary life in the country with his mother and her new husband. It was while ensconced in a lowly chateau that Errole had his first encounter with the supernatural.

Young Errole had been put to bed and was currently being looked after by his olde nurse who listening to the rough sounds of revelry in the halls below was thinking how difficult it was for this small babe to sleep when a scullery maid burst into the nursery and whispered that the olde nurse should go down and take a peek at all the revelry happening below. The olde nurse was horrified – what leave my babe and betray the trust placed in her, but the maid insisted and said that she would remain behind to watch the sleeping child while the nurse went to see what all the racket was about.

The scullery maid rocked the cradle with one foot while listening to the sounds of revelry coming from the floors below, her mind began to wander and soon the thick woollen blanket that had been covering the baby slipped unnoticed onto the cold stone floor. It wasn’t long before young Errole was crying with cold and the inexperienced maid could do nothing to sooth the tears. She hurried to the open door and called for the nurse, but the music drowned out her cries for help. She ran down the stone steps calling for the nurse leaving Errole alone in the nursery.

At that very moment a faery woman and her familiar who were flying past the chateau heard the crying and sneaked a peak through the nursery window. The faery could see that the crying baby Errole was cold and his shawl had slipped off. If nothing were done the poor baby would freeze to death. The kindly faery squeezed her way into the chilled room and unwinding a strip of fine cloth or blue flag, swaddled the cold child against the chill night air. She gently rocked the cradle and Errole began to calm down and the crying subsided. As the faery rocked the now sleeping baby she began to chant an ancient spell.

At that moment the olde nurse returned and seeing the strange faery woman rocking the baby asked “Mercy me - who are you”. And tried to pull the blue cloth off Errole.

“Stop” said the faery and then added “The flag will not harm the baby in fact it is a magical talisman that will protect him from the bitter cold and much more besides”.

The kindly faery explained that the blue flag had once belonged to the high kings of Urop and with its gold embroidered freur-de-lyse was a great magical treasure, one that would protect the young Errole for the rest of his life. For all Errole had to do was wave the flag and wylde faery magic would come to his aid.

Throughout Errols youth the flag was nothing more than a child’s blanket, something that was relegated to the nursery, but as Errole entered manhood the same child’s plaything became a great talisman and later as Errole was successful in leading a troop of Ferach Marines, the blue flag became a squadron pendant that Errole kept as a lucky regimental mascot.

There are many tales of how the brave Errole was successful or won over some Ferach foe, but in almost every case it was the wylde magik of the blue and gold banner and faery luck or good fortune that was really to blame. One such action took place in Al Garvey during the retreat from Corruna. Errole and his squad of twenty Ferach marines were skirmishing along a dry river bed when they were surprised by a force of many Goblin Cacadores. Outnumbered and suffering volley after volley of shot Errole waved the battle standard above his head. Within minutes a blast of warm air flew up the gulley bringing with it a huge cloud of dust and debris. The Goblins were at first disorientated, but then Errole and the marines heard shrieks and screams as one by one the Goblins were dispatched, their puny bodies ripped limb from limb.

Another example of faery good fortune happened later that year when Errole and the marines were retreating from another greater force, this time Albion Redcoats. Errole was worried that the mounted Orc outriders would cut off any chance of retreat and having just crossed a wide and fast flowing river, Errole waved the flag. At first very little happened, but as the Orc riders approached the only bridge for miles around – a rumbling sound was growing up river. The sound grew then just as the riders reached the stone bridge, a huge torrent of water smashed into the bridge and washed it away, taking with it the mounted redcoats. Errole and his troop were safe – again.

For gamers of Flintloque, treat the pendant as a regimental heirloom which will endow the whole regiment/squadron with +2 leadership and +2 moral when waved. In addition there should be a negative effect on any opponent facing the troop of -1. My favourite way of using this magical artefact is to re-role ant one of the die rolls that have failed Errole – adding +2 to the new dice role and checking the effect.

If I were to model this flag – I would paint it royal blue with gold fleur-de-lyse as featured on the royal banner of the kings of France.

This short story was inspired by an old fairy tale called The Faery Flag by Beryl Maude-Jones for details see this YouTube link.

This article was written exclusively for Orcs in the Webbe and was first published on the 10th December 2019 as part of its 2019 Advent Calendar.