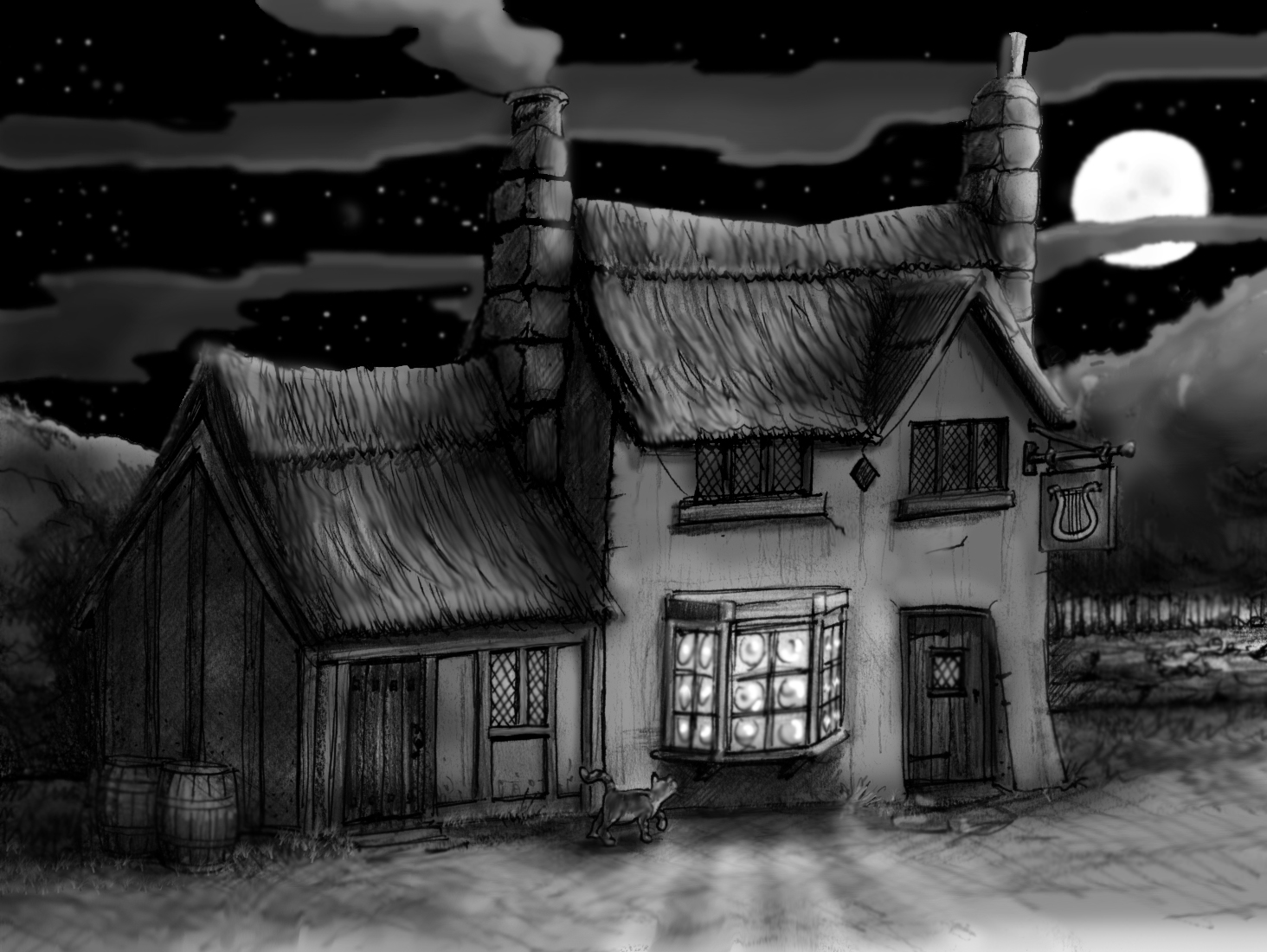 The White Liar is regularly frequented by Orcs, Bog Orcs, Dwarves and Ogres. It is less common to see Elves, Ostarian Dogs and Todoroni, but exceptionally rare to encounter an Algarvian Goblin.

One warm sultry night as the sun continued to cast coloured rays from the West a small, bent creature entered the White Liar and raising himself up to his full height, peeped over the bar and ordered both a draft and some broth. The landlord had already started to serve the visitor before realising that this was in fact a green-skinned Goblin from the far away land of Al Garvey.

Within minutes word spread and the tavern was soon full to brimming with enquiring and curious townsfolk. As is the custom in these parts – a request for a tale or story was greeted with howls of approval from all and the refreshed goblin recounted this tale.

“For many centuries the fast flowing river Du-Row had acted as a natural boundary between Catalunia, home of the swarthy Dark Elves and Al Garvey the sea-bordered lands of the fiercely loyal green-skinned Goblins.

All this changed when the Upper Du-Row was invaded by a clan of Pyranees Mountain Giants who terrorised communities on both sides of the river border.

These un-couth Giants would ‘make sport’ by hurling huge rocks across the river trying to soak each other by seeing who could land their boulders as close to the shore as possible but without actually landing directly on dry land. This game gave the slow-witted brutes many hours of fun, but terrified the locals who shun the shores of this great river and set about building their own stone-walled terraces on which they grew grape vines which with time and (great) care matured into fine wine-making vines.

These grapes, once ripe were shipped down river on huge Dows or un-manned sailing rafts to Uporto to be made into rich fortified wines which are so famous in all the three corners of Valon. But I digress. The Mountain Giants continued to throw their stones and at one point the two piles of boulders met to form a natural stone bridge.

During both the Mordredian Wars and the dark Ferach invasion of Catalucia, this bridge was used by Ferach, Dark Elves, Albion Orcs, Ogres and Goblins to harass attacking and retreating forces. When the Mountain Giants returned home to their great white-topped peaks a fearsome Troll, a Bridge Troll took up residence under the structure demanding payment in live flesh for anyone who tried to cross. In Al Garvey there are stories told to young goblinoids about a family of goat-headed beasts who clip-clopped across the bridge and butted the Troll into the river, but again I digress.

My story concerns a great Goblin Hero who succeeded in marching a whole company of Cacadores from Al Garvey into Catalucia and securing the defeat of the dreaded Ferach invaders.

Juan was a sergeant in the 1st Cacadores Rifles, a leader with keen battle skills which had been honed during his time under your great General Wheeling-turn and battles such as Sallymanka. (At the mention of this great victory – there were many Huzzah’s and cheering in the tavern.) Juan was a keen marksman and it is said that even before being equipped with the legendary Bakur rifle Juan was able to shoot the eye out of a trotting Dodo at 500 paces. This skill served him well and it wasn’t long before he was promoted and later moved to the newly formed Cacadores, resplendent in their new brown uniforms and now armed with the Bakur rifle the 1st Cacadores Rifles were amongst the very best troops in the armies of the Grand Alliance.

During the famous Ferach retreat Juan and his company were assigned to act as a screening force and move through the parched dry lands that bordered the river Du-Row. His orders were simple, to protect the larger Albion Orc and Catalunian forces that were marching to expel these Ferach Elves.

However Juan and his company of 1st Cacadores were on the wrong side of the river, in Al Garvey, while both the advancing Albion Alliance and the retreating Ferach were in Catalunia. It looked as if Juan and his green-skinned compatriots were to miss out on this decisive action, until they spotted the Giant-made stone bridge or Troll Bridge.

Stories of the bridge and the fearsome Troll recounted tales of a mean and cunning Troll whose only companion was an old and now greying crow who would warn him of the approach of enemies. It is said that the Troll was immune to iron weapons, in fact many had tried (and failed) to rid the area of this horrible creature. Legend also stated that the Troll could only be killed by a child’s toy!

As Juan and the Rifles approached the crow was seen circling above the gorge riding lazily on the warm winds, a surprise attack was out of the question. Juan decided on the direct approach and ordered the Goblins to advance. At the same time he questioned the small group of young Goblins or Goblinoids who accompanied the group if they had any toys. Amongst the young followers there were many mischievous would-be soldiers and emptying their pockets a collection of catapults, rusty knives make-do spears and balls of string emerged. In short the sort of thing that any self-respecting young Goblin would treasure. As Juan gingerly fingered through the hoard he came across the perfect weapon and picking up a glass marble as black as midnight and as hard as steel and smiled to himself.

Juan’s plan was simple. Taking inspiration from an olde children’s fairie tale he planned to allow the smaller Goblinoids to cross the bridge first, instructing them to tell the Bridge Troll that they shouldn’t eat such scrawny fodder as larger and fatter Goblin kin were soon to approach.

This they did and the Troll allowed the young Goblins to cross unmolested.

Next Juan sent his younger and smaller soldiers with similar orders and once again they were allowed to cross.

Then Juan ordered the main group of Cacadores to cross, this time telling them to relay to the Troll that Juan, the largest and fattest Goblin, their leader was soon to cross and he would make a fine meal for such a ravenous Troll. As they marched past him, Juan handed a large wine filled goat-skin to one of the soldiers, giving him orders to leave it hanging at the side of the bridge. He then removed his stiff leather Shako, donned a red bandanna and settled down behind some rocks.

With the olde crow sailing above an hour went by, then another and overcome by curiosity the Troll eventually emerged from under the bridge to scan the bank of the river for this promised meal-on-legs. The goat-skin proved too much temptation for the Troll and he wasted no time in drinking down the dark red wine

This was what Juan had been waiting for. With his Bakur rifle carefully loaded with black powder and the solid glass orb, Juan took aim.

One shot. A perfect shot and the once terrifying Troll was downed by a single glass marble which struck him directly in the centre of his temple. A one-in-a-million shot that would be talked about for years to come. The Troll was dead! He collapsed lifeless on the huge stone bridge and the crow swooped down to take revenge on its cruel master – plucking out both glazed eyes and ‘cawing’ loudly to all who would listen. “Caw, caw, caw.”

Juan prised out the black glass marble and tossed it back to a snotty-nosed goblin youth, saying.

“That’s a Oneser and no doubt! Keep it safe - this child’s toy has downed a great Troll.”

The grateful crow leapt onto Juan’s shoulder and settled there and as some pirates have loyal parrots the crow stays there to this day.” Following the death of the Troll he was named – Juan Shotte, in memory of the day and that fine kill.

Later the Cacadores met up with the main army and were one of the regiments that harried the Ferach across their border and on to the heart of their homeland.”

As the story finished and the Goblin prepared to leave many looked around at one another – this was a fine story – One that was new to The White Liar and all of Albion.

“What of Juan and his crow?” Asked one reveller.

“Oh, no doubt they are still together.” And with that the Green-skinned traveller drank the last of his liquor and left the tavern walking into the now dark night. While the clientele of The White Liar prepared to leave a loud and eerie ‘Caw, caw, caw ‘was heard to come from the direction in which the lone Goblin had walked and a black crow was seen to swoop against the bright full moon.