Updated and Expanded for 3rd Edition by Craig Andrews 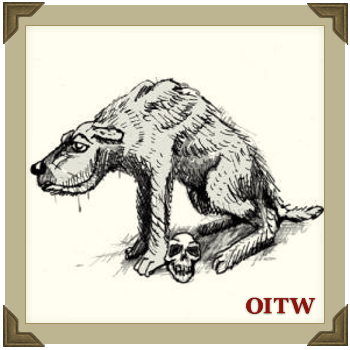 Given the nature of some of the races of Valon an oft discussed subject is that of stray Dogs in Valon... not those of the Emperor Mordred but those of the street.

Distractions and Asides are short pieces for you to add to your games of Flintloque & Frontear the Skirmish. They are totally superficial and not needed in the slightest during play, as they add nothing to the ‘engine’ of the game.

Then why have you create them, I hear you shout, and rightly so.....

The reason is anarchy, the reason is fun; the reason is to add a chance of total ruin for one or more characters during play. These optional suggested additions are for ‘role play’, adding to the characters of your scenarios. We give you Distractions & Asides!

This time we have an article written by French Flintloque fan Didier Galard on the subject of stray Dogs... not those of the Emperor but those of the street, animals in other words. Enjoy!

A battle field is a feeding place of choice for the thousands of stray dogs of all descriptions that the war has left without employment or employer, be they farm dogs escaped from a ravaged farm, sheep dogs without a flock to keep, guard dogs from a burnt warehouse, or simply street vagabonds from a looted city... So it is only common sense to expect characters to run across the path of some of these, sometimes dangerous, creatures, and to have to cope with some fierce usually-fourlegged not so friendly mongrels.

*Please not these optional rules cover ANIMALS not the Dog Soldiers of Ostaria or other kingdoms.

If, or when you wish to include these strays in a scenario,follow the steps...

Each player secretly selects one to three spots where there is a dog (i.e., each player writes on a piece of paper where the dogs are, preferably close to the deployment zone of the other player); as soon as an animal becomes visible to a character, inform the player and place a miniature on the field.

(Miniatures of dogs are plenty ; I use the AA Wolf hounds that you can find for Erin game of Celtic Myth).

As soon as a character enters a dog’s territory (less than 12 cm from the dog), roll for the type of dog (D6), then for the dog’s attitude (D6), using the tables below.

For the profile of a Dog use that of a Halfling for a strong Dog, a Dwarf for a moderate animal and Goblin for a weaker Dog. Same Tough and Melee Modifier along with Movement rates, but only 1 Wound.

Official stats for one type of dog do exist in Flintloque 3rd Edition. The Halflings of Aegypt use a large breed of dog for a mount, the Aegyptian Hound, stats for it can be found in the Master Mounts Table (v1.2 2011) and are reproduced below for ease of play:

1-2 : a fierce-looking, threatening mongrel that...

5-6 : ... barks like mad ; any surprise effect is lost. If the character stays in the dog’s territory, re-roll on this table next turn for the dog’s reaction.

1-2 : ... whines pitiably and irresistibly : the character is moved, crouches and cuddles the poor animal. The character’s turn and vigilance stop immediately ; he is considered surprised and helpless for the rest of the turn.

5-6 : ... gets in the character’s legs for a cuddle, and gives him a one column negative modifier for any other action taken that turn and any subsequent turn until got rid of.

1-2 : ... runs away in the opposite direction from the character’s arrival, yelping loudly as if beaten ; any surprise effect present in the scenario is lost.

4-5 : ... hides in a corner, and waits for the next character to come into its territory ; when that  happens, roll a new for the type of dog (it can change attitude).

5-6 : ... lies flat on the ground, in total and abject submission ; the character gets +1 to his Steady (for the rest of the adventure or until he fails a Steady Check), as he feels strong and charismatic.

Miniatures for These Rules

As Didier mentions in the article above, Alternative Armies also publish a cracking game of Celtic Myth called Erin. In that range you can find some suitable Wolf Hounds for use as domestic dogs in your games of Flintloque.

The above article was originally published on Alternative Armies' Yahoo Group, The Notable Members on the 7th March 2008, and is reproduced here with permission.

I have updated the terminology to make it compatible with Flintloque 3rd Edition and also added in a section on Aegyptian Hounds (shown in maroon above).