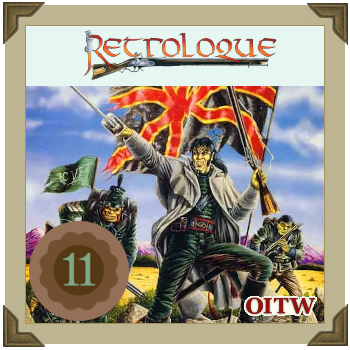 I’d like to make it clear from the outset that this article is written with the first edition of Flintloque and the subsequent Grapeshotte supplement in mind, which we now use for the world famous phenomenon that is ‘Retroloque’.

Named characters; we all love the miniatures that represent our own favourite characters in Valons diverse background and the special rules that those characters come with. The likes of Sharke, Harpy, Hagsmun and the rest of the chosen Orcs from the original boxed set hold a place very close to the hearts of many of us. Then there’s later additions to the game like Obidiah, Dotti Bonkins and Oswald Pebblekettle to name but a few, but I’d like to put it to you that those fellows and their likes are the stuff of Valon legend and maybe shouldn’t have a place in the daily strife of the common soldiers and the battles they must face and try to survive.

Everyone knows that the ‘Big knobs’ don’t see the rankers and have no clue and even less care how daily life is a struggle for, erm, life! and why would they? They certainly don’t hunt, nor do the rankers cut a figure in polite society, so where’s the benefit of associating with them for the top brass?

Even though many of the ‘names’ in our beloved game have achieved god like status, how do we deal with the death of one of these fine fellows during a battle? Do they simply reappear seemingly unharmed ready for the next battle? Have they miraculously survived the surgeons knife (not bloody likely!) and been plucked at the last moment from the very clutches of their death, every time they take a killing blow during a game?

This often troubles me and gives me sleepless nights (that’s a lie).

When preparing our shiny new roster for the coming games aplenty, the usual method is to either roll for the number of lucky new recruits, or pick a number that is agreeable for both you and your opponent and then a percentage of the newly formed section can be either raw, average or experienced, which works fine. These old hands have obviously survived a number of previous battles and gained new skills and maybe even some magical abilities along the way which can be very useful, but how did they gain their experience? what near misses rose them in status and ability? Without having the answers to these questions how can we re-tell (lie about) the heroic background story of our own troops and recount the episodes of bravery, cowardice or full on jammy luck to our fellow gamers around the proverbial campfire whilst swigging some ‘ome bru and chomping on a roasted Unicorn leg or three?

In short, for myself at least, part of the great attraction of Flintloque always was, has been and is, the on the table role play aspect of putting together a section of little lead men, painting them up (I hate that bit) to bring them to life, then one game at a time building their characters from those insanely long shots that we’ve all witnessed that against all the odds manage to down an enemy cavalryman just before he sticks one of your troops with sabre or lance, or the soldier in your section who apparently is incapable of firing a musket without it exploding in his face! These are the moments that allow your troops characters to take shape and build the bond between man and

metal that forces you to make decisions during a game simply to keep your boys alive for one more battle so that they may earn the right to move up in experience level from a lowly raw recruit, to begin the perilous journey to becoming an old hand, at which point an individuals bravery on the battlefield can be rewarded with promotion or even that rarity that is trick magic. Surely these things must be earned only after many encounters with the enemy and not given freely. After all, our sections do not march on paper alone do they?

Thus, I put it to you that the only honourable way to enter the glorious world of Valon and do battle therein, is with troops raised from the gutters of whichever run down, villain filled City, Town or Hovel which might offer up such Orcs, Elves, Dwarves or whichever race takes your fancy that can be persuaded to take the Kings shilling (or whatever form of currency needs to be promised, yet never given) and mould them into a section that you can be proud of, once casualties have been taken into consideration of course.

With all of this firmly in mind, I treat with you that the next time you decide to put pen to paper to build a new force ready to do battle, roll your D10’s or D8’s and accept the gifts the dice gods have given you, arm your troops according to the equipment they are carrying (plus the odd knife tucked in the boot), name them and chose one lucky soul to be their leader, then take these fully RAW recruits out into the wilds to earn their names and reputations the hard way, one gruesome battle at a time. Don’t be afraid, try it and all will be well, I promise…

The author cannot be held responsible for the maiming, disfigurement, mass loss of little lead life or any form of psychological damage that gaming in this way might have on those foolish enough to attempt it.

The above rules supplement is an Orcs in the Webbe original and was first published on December 11th 2020 as part of its 2020 Advent Calendar.

Retroloque is to Flintloque that which Oldhammer is to GW. Fans playing the original game the original way. It's a cracking idea and one gaining more mometum every week, Head on over to Dave's Retroloque Facebook Page to find out more by clicking on the link below: