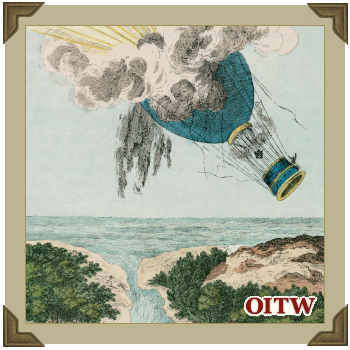 Artwork from a 1887 Illustration in National Geographic*

Two Albion Group Captains, Wilbur and Orcville Rite have crash landed an experimental new airboat in Dark Elf infested Catalucia. It's up to a crack squad of handpicked Goblin Caçadores to rescue them and retrieve the balloon.

It is midnight, twenty miles north of Palencia, ten miles forward of Wheeling-Turn’s lines, deep in Catalucia. Nothing stirs in the eerie silence, there is no evidence of the terrible conflict that threatens to creep inland as the Albion and Al-Garvian forces push ever forward into the Dark Elven heartlands. The orange grove is as tranquil a place as could be found anywhere in Valon. Then all of a sudden it isn’t…

Crashing loudly through the treetops, ripping branches from several of the larger orange trees at the centre of the sprawling citrus grove, the observation balloon made it’s undignified descent. Emitting a stream of Black Country curses and barrack-room oaths as it thumps to the earth, its basket upturned and its tattered envelope torn asunder.

“Bollocks! That’s torn it. You’ve made a roight codge o’ this bruv!” exclaimed the large Orc flying officer from underneath the rapidly deflating mass of the silk ballon.

“Stop yer ivverin' an' ovverin' an' get on wi' helpin' me down yow big lommock!” replied his twin brother from the boughs of the largest tree.

Group Captain Orcville Rite lay under his basket and nursed his aching back. He knew they were in deep, deep trouble. He wished fervently that they were instead back home with their old dad in Brum, rather than behind enemy lines in Catalucia. This was no place for a pair of Black Orcs, nor was it part of their missio...

The unmistakable sound of several muskets being cocked alerted Orcville to the true extent of their predicament.

“Salir con las manos señores! That meens 'ands in ze air, Albiones. I am Capitán Manuel Torres, and you are my prisioneros! What a marvellous contrapcione you ‘av zere.”

orward observers for Wheeling-Turn’s 4th Infantry division. Large Orcs from the ‘Black Country’ of Albions heartland, these twins are amongst the first Orcs trained to use the balloon variant of the Goblin Airboat. They have been entrusted with the only operable observation balloon in the Dukes forces. Sadly, due chiefly to their tendency to bicker and fight constantly, they have crash landed it deep behind enemy lines whilst debating the ownership of the final bottle of gin. They start the game tied up in a hay barn, disarmed and under guard.

The ranking commander of a small unit of Catalucian regular infantry, billeted north of the city of Palencia. He is more than aware of the importance of his prize; neither the Catalucian nor the Ferach forces have access to flying machine technology at this early stage of the war (see Steve Blease’s article ‘The Corps D'Aerostiers’). He knows that the Dark Elven Marshal (José Pascual de Zayas y Chacón, since you ask) has ordered that such a machine must be captured and reported to their Ferach allies as a matter of great urgency. The Orcs have very nearly fallen right into his lap.

Ferach Intelligence Officer, hurrying to the scene as fast as his horse can carry him. He is under strict orders to obtain an Air Balloon in the best condition that is possible. Captured air crew are an unexpected bonus.

The best infantry unit available in the area have been selected to extract the captured aircrew, and either to retrieve or destroy the remains of the air balloon before the Ferach Intelligence Corps can get a proper look at it.

There is no map provided for this scenario. It's best played on a 3 foot square playing area as most of the action will take part in and around the farmhouse itself. In the centre of the area you should setup a moderately sized farmhouse, think the battle of La Haye Sant. The image below shows the sort of thing to aim for but use whatever terrain you have. There should be three to four main buildings (one clearly representing the hay barn) and a wall with gate surrounding the the complex. The gate starts the game wide open.

There is of course also a downed balloon, this should be set on a large cart in the courtyard of the farmhouse.

As stated above the Goblins mission is to rescue the captured aircrew, and either to retrieve or destroy the remains of the air balloon before the Ferach Intelligence Corps can get a proper look at it.

This section of Goblin Rifles was created using the rules on page 46 of Flintloque - War in Catalucia (5025). I rolled randomly for Magicke, as per page 62, none getting any sadly. I did the same for skills. Using an online custom dice roller I rolled a D14 for each Goblin with a skill as there's 12 generic skills and 2 racial skills available for Goblins. I then assigned weapons to them based on the skills. I also gave the section leader and section second some traits to flesh out their characters a bit and then determined randomly for the rest, rolling D10 and planning on giving them a trait or flaw (50%/50% chance) on a roll of 1. Sadly I didn't roll a single 1.

There is a small chance that the Orc boys will be able to free themselves of their bonds whilst the Dark Elves are busy with the Goblins. Each turn in the Initiative Phase before rolling for Initiative roll D100, on a roll of 01-05 the boys from Albion have freed themselves and can now be controlled by the Goblin player as per the normal rules (or an extra player if someone is keen to join). Treat them as their own section with no command points, also they both count as section leader for the purposes of any modifiers or rolls.

The Rite boys want to escape, they don't give a whores breakfast about the balloon, they can make new one when they get back to Albion. They will engage the Dark Elves but will not stand and fight to the death or anything like that.

The Dark Elves mission is a simple one, to defend the downed balloon and prevent it being recovered or destroyed by the the Grande Alliance.

The Dark Elves can be payed by a player but they can also be easily represented using the solo play rules on page 89. If using the solo rules there are 12 of them and they use the "C" rating.

If assigning them to a player just use the section that has been created for you on page 61 of Flintloque - War in Catalucia (5025) but swap the Guerrilla Troop Type for Regular. Use El Murdo to represent Capitán Manuel Torres.

They setup anywhere inside the farmhouse, if playing against them choose their setup locations fairly, places in cover with good lines of fire.

They achieve victory by keeping the Goblins away and letting the Ferach Intelligence Officer do his job.

Each turn during the Initiative Phase but before rolling for Initiative you need to roll to see if Fouché has arrived. This is done by rolling a D10 and adding the current turn. If the result is 10 or more he arrives on the table edge closest to the farmhouse gate. If the Dark Elves are being played by a real opponent then he becomes under their control but will not engage anyone, intent on getting to the balloon.
If using the solo rules for the Dark Elves then use the following behaviour:

He will move at the fastest possible speed each activation until he reaches the farmhouse. Once inside he will dismount, move alongside the balloon and start taking notes. At his point the two Dark Elves nearest the gate must be activated to close it, after which control continues as per the solo rules.

Each turn roll D10 for Fouché, this represents his note taking and drawing and keep a running total of the score. Once he reaches a total of 30 he will try to escape off the board with the information he has collected. He will also command two Dark Elves to retrieve the prisoners and another to attach the cart to his horse. He will order the two Dark Elves to follow him off the board. As before he will move as fast as possible to get away with the information he has collected. The two Dark Elves should also do this, all other Dark Elves continue to be used as per the solo rules but become Aggressive for the rest of scenario regardless of what was rolled at the start of the game.

If the Dark Elves are being played by a real person they can open/close the gates as will during the game. It's a standard action to do so for each side of the gate. i.e. A figure may move and close the gate as opposed to move and shoot.

I'd like to thank Steve Blease for the inspiration for this scenario many many years ago. Without the Goblin Airboats in the old Orcs in the Hills magazine it would never have came about. The Balloon in the pictures below is actually the ball cock from the house I lived in back then that has been part converted all these years.

Ben was in fact the person who got me into Flintloque back in the 90's when we both should have been working a damned sight harder on our respective Ancient History & Archaeology degree's than we actually did. Hey ho we were young and loved red wine and Guinness a bit too much and Napoleonics with Orcs was just too much fun.

Ben was also the person who actually came up with the name for Orcs in the Webbe after I declared my intent on doing an online resource for this little game that we used to buy figures for in Beatties in Birmingham. Black Orc Down is Ben's first return to the world of Valon this decade I believe and I hope it's not his last.

* The image is from an illustration published in 1887 depicting French scientist's Jean-Francois Pilatre de Rozier's balloon catching fire before it crashed in 1785. It is used without permission and will be removed if requested by the copyright holder.