[Editor's Note: If you have arrived here looking for "Doctor Deadrock I Presume" click here, if not please read on...]

Returning from special duties in the Windy Isles, Captain Sharke and his Orc Rifles have stopped off in the Occupied Zone, a harsh tropical land and they have one hell of a battle ahead of them...

The tropical sun beat down on the dusty plain in the Occupied Zone. Sweat poured off Sharke’s brow, he wiped it away from his eyes, his concentration focused on the enemy stood stock still in front of him.

The battle had swung one way and the other, the taste of the sweet nectar of victory or the bitter ashes of defeat now rested on Sharke’s Half-Orc shoulders. He tried to hawk a gob of phlegm on to the baked earth but his throat was too dry, he could feel the sun burning his back, he’d better get on with this, no point waiting.

Suddenly Sharke hurled himself forward, his hobnailed boots hammering the ground as he ran forward, picking up speed. His enemy turned to face him… and raised his weapon. Sharke threw the missile he held he is right hand. It bounced once on the packed earth before smashing into its target!

The Battle for the Ashes

Returning from special duties in the Windy Isles, Captain Sharke and his Orc Rifles have stopped off in the Occupied Zone, a harsh tropical land garrisoned by penal troops to prevent the hated Elven enemy establishing a garrison that could threatened Orc maritime trade routes across Valon.

Whilst it was winter in Albion with the Fuletyde* celebrations of the Winter Solstice well underway (how Sharke craved a good slice of roast whelp with all the trimmings…), here in the damned Occupied Zone (OZ) it was the height of summer and hotter than the most damnedest hot day in Southern Catalucia.

Sharke’s arrival coincided with the legendary annual Fuletyde K’rickk It! match between the penal troops and their officers (K’rickk It! being another variation of the old Orc cavalry game of Olop with less running around than Futbowel) and short of players the officers drafted in Sharke and his Rifles (but not the bally Bog-Orc sergeant, one had to have limits and an umpire).

This year’s match was a very tense affair with the Penal troops running down the Officers score and the Officer ‘bawlers’ not faring well against the aggressive troopers ‘battas’. However both Sharke and Hagsmun proved quite skilled at skittling the Penal troops ‘owt’ and with the last ‘bawl’ Sharke won the game for the Officers (huzzah!)

As tradition demands the winners have to receive a trophy (as well as huge amounts of gin and grogge) and in the annual OZ match this was a small urn holding the Ashes of ‘Wee Gracie’ – an Abu show girl who had been much beloved (and if rumours are true, uh hum, “loved”) by both the Orc officers and penal troops of the garrison.

* Fuletyde is a traditional Orc celebration in deepest winter whereby entertainment is provided by staking out some of the insane inmates of Bedlum on the banks of the river and watching them drown at high tide whilst eating chest and nuts.

The Orcs didn’t care the Occupied Zone was already occupied before they decided to occupy it! As in many tropical areas of Valon, such as the Windy Isles, populations of near feral Halflings can be found and the Abu tribe were the original indigenous population of this territory.

Whilst the Orcs tended to restrict their colonisation to the coast (after all it was too bloody hot in the interior to be worth “havin’ a look at” – as Orcs called exploring), the impact on the Abu was quite dramatic with many being captured and taken as slaves by the Orcs who found the little buggers useful for digging latrines, sating the Orcs sexual urges and eating.

However for every one Abu slave in the Occupied Zone garrison, there were at least ten, maybe a hundred of the savage Halflings in the Interior. Fortunately for the Orcs, the Abu were a more interested in going on ‘walkie bouts’ searching for the legendary ’golden nectar’ of the great sky god Foz-tar whilst living off a narcotic brown paste called ‘veggie-might’ (rumoured to make the eater as strong as a tree, or maybe a turnip – academics still aren’t too certain).

Once in a while though a leader arose amongst the savage Abu who promised to rid their lands of the hated OZ Orcs. Unfortunately for Sharke and his rifles it was now one of those times…

The Action at The Gobby

As our scenario begins the match at “The Gobby” (so called because of the amount of hazing between the teams) has just finished with Sharke having bawled the final Ozzy player Hussy out.

The Rifles and officers are spread around the plain with Sharke, Harpy and the two Ozzy “battas” in the centre of the field with the remaining Ozzy troops in the pavilion (see map).

The Abu enter the field of play (without permission as Captain Strowz subsequently noted in his diary) from the east.

The Rifles and Officers

In addition to the six rifles from the original Flintloque game there are four Officers on the playing field:

All are unarmed except Sharke who has a ‘bawl’ (treat as a small improvised throwing weapon) and Harpy who carries a sword as befits his role as Umpire.

The officers swords and pistols and the rifles normal weapons are held in the “padz locka” next to the “pavilliyon”.

There are two Ozzy Penal Troops in the centre of the field of play, Hussy and Arriz. The remainder of the Ozzy team at sat in the “pavillyon” drinking watered down grogge (spiced up with some illicitly produced local hooch – don’t tell the officers).

Hussy and Arriz carry ‘battz’ (treat as +1 for HtH combat) and the remaining Ozzy troopers will grab ‘battz’ and ‘balwz’ from the “pavillyon” before entering battle.

Special rule: as befits their penal status all Ozzy troops were leg fetters and consequently are unable to run.

There are five groups of ten Abu Halflings who will arrive randomly throughout the battle from random sides. I would suggest they are controlled by the umpire with the players taking the Orc side (this would allow the umpire at their option to give the Rifles, Officers and Penal Troops differing objectives, maybe the Ozzy’s looking to settle a few scores with the Officers?).

The Abu Halflings are all average guerrillas armed with short spears and clubs (form miniatures I suggest using the Kallistra Halflings). They enter the field of play as follows:

Option: if the umpire is running the Abu and finds they are not faring well against the Orcs then they can optionally introduce 2D6 rebellious average guerrilla slaves who enter from the west armed with dwarf muskets. 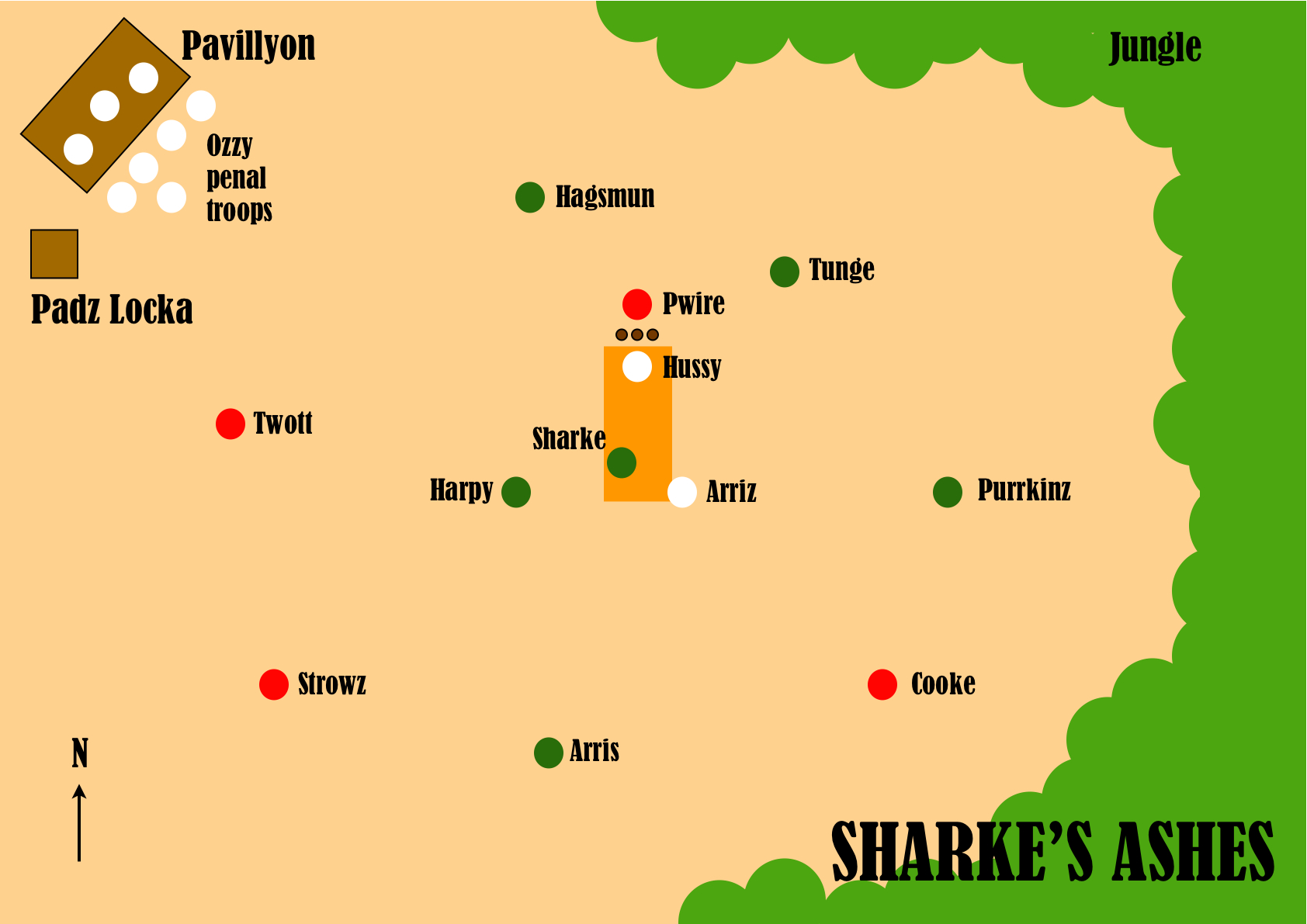