A Flintloque Scenario by Ed Proctor 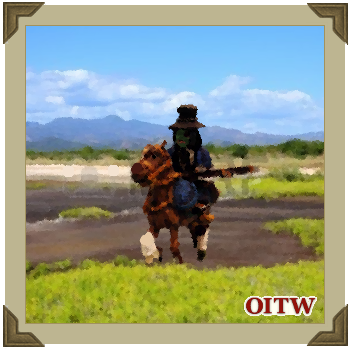 The Albion Exploring Officer, Haines Pong, must lead a group of Dark Elf Guerrillas in an assault on a Ferach message relay station.

Sending messages in Catalucia is difficult for the Ferach. Their messengers are always getting ambushed by the Dark Elves’ guerrillas, so the Ferach have set up staging posts along their lines of communications from forts or defensible buildings. These posts could be buildings that were pressed into service or purpose-built buildings like the Block House.

An Albion Exploring Officer, Haines Pong (also known as oh oh seven), working behind the Ferach lines has found out that a new staging post is being built. If destroyed it could effect the Ferach communications for months to come. So with his Dark Elven allies they set out to destroy the Block House before it is completed.

Will Haines destroy the Block House or will he make a big pong out of this adventure?

The table is set up as per the map with two light woods in the North East and North West corners of the table and a number of piles of rock over the table which can be used as cover. The Block House, with a barricade surrounding it, is placed on the south side of the table.

For the Block House use a single story building about 12-16cm square which could be easily constructed out of card.

You will need a copy of the following 3rd edition Flintloque books; War in Catalucia and Grapeshotte.

The scenario takes place at night with a full moon so use the Low Light Skirmish rules for night fighting from Grapeshotte, p.21.

The Elves in the Block House at the start of the scenario are at rest, but it takes either gun fire or one of the Elves on Guard duty who have spotted one of the Guerrillas to raise the alarm before they can perform any actions in the following turn.

Victory for both sides is the capturing, or retaining of, the Block House and its’ compound.

The section consists of ten Voltiguers and two Gunners. The two gunners’ operates a 2 Inch Howitzer (from Grapeshotte, page 30) and Shelles, Caseshotte and Carcass are available to fire. The Howitzer starts the game loaded with a Carcass shelle.

The Guerrillas section consists of one Orc exploring officer and fifteen Dark Elves. The Guerrilla player(s) can split the section into two sections of eight.

You could alter the scenario by replacing some of the Guerrillas with the equivalent point’s value of Orc Rifles and you could replace “Hanes Pong” with “Lieutenant Shark” of the 105th Rifles.

An Orcs in the Webbe Original! "The Block House" was first published on the 12th December 2010 as part of OITW's 2010 Countdown to Christmas Advent Calendar.