Sharke's Rifles have been transported to another world by vile Magicke. This time they face skirted Orcs with swords and an Eagle the likes of which they've not seen before...

“Damnation and hellfire!” Sharke cursed running his paw through his lank greasy hair. “Where the hels are we now?”

As he got to his feet he noticed the rest of his Chosen Orcs coming ‘round. Things had certainly gone tits up since Badajobz. First some poxy pointy eared git had thrown a wylde magick grenade at them transporting them to a land with iron dragons and muskets that spat balls out at rates far beyond the three a minute the lads could and now, well what the hels now?

He could still smell the ozone and concluded the grenade’s spell was still affecting the Orc Rifles though Artur alone knew where they were now. Glancing around he surveyed the terrain. The Orcs now found themselves on a snowy hillside (“why was it always snowing?” he mused). Higher up the slope and also across from them were dark sinister looking forests of conifers, below there was a valley with a dirt road leading to hel knew where or even cared.

Suddenly Sharke tensed, the hairs on his neck stood proud. They were being watched, he could feel it… Slowly he scanned the tree line. Nothing showed but he was certain, Mordred’s bollocks, he knew that they were being watched - and what was watching them was not friendly...

His attention was still fixed on the dark sinister forest when his huge Bog Orc sergeant approached him.

“What the feck is that there soir?” asked Harpy pointing at a mass of troops marching down the road.

Sharke turned and looked at where Harpy was pointing but the distance and flurries of sleet made it unclear. Drawing the looking glass Wheeling-Turn had given him after saving the General’s life from the Goblins savages in Dojjibotti, he concentrated on the approaching dark smudge.

“Buggered if I know Harpy”, he said squinting through the lens, before rubbing his eye with a dirty sleeve and looking again. “They look like… they look Orcs but… but, they appear to be carrying an eagle and Artur above they are wearing skirts!”

“Skirts soir?!” exclaimed Harpy. “And an eagle?! Begorrah, they must have been tortured and corrupted by the bleedin’ Elves soir!”

“Aye Harpy” mused Sharke, “Must be that. No self respecting Orc would wear a bloody skirt…”

From One World To Another

Sharke’s Aquila is a sequel to 2009’s Sharke’s Panzerfäuste when Sharke and his lads found themselves transported by foul magicke to the world of Panzerfäuste. Having escaped from The Land and the disadvantage of being armed with muskets when everyone else was carrying machine guns, Sharke and the loyal 105th have be transported bot back to Valon as hoped, but to Bochemannica, a brutal world wear Orcs carry swords and shields and appear to wear skirts and sandals!

Bochemannica is the fantasy world of Maveryc’s Pax Bochemannica game, a similar concept to the likes of Flintloque and Panzerfäuste, but this time with ancient historical parallels such as Roman Orcs and much inspiration taken from the film Gladiator.

Like with Sharke’s Panzerfauste I’m not going to dictate which rules to use or provide detailed crossover rules. Both Flintloque and Pax Bochemannica contain good melee rules. Pax Bochemannica obviously lacks any muskets stats but to keep things simple I suggest you use the percentage hit chances straight from Flintloque and give the muskets the same weapon strength as a bow in Pax Bochemannica. The rules seem to share many similarities (such as a percentile system) that they can be mixed and matched as needed.

The scenario is designed for three players, though the halflings could be run on a simple reaction table if you only have two players, and utilises all the Orcs form the Flintloque box and all twenty miniatures from the Pax Bochemannica box.

Sharke’s 105th Rifles have been magickaly transported to Bochemannica by vile Elven sorcery. As previously they will only remain in this strange new world for 6 plus 1D10 turns and the Sharke player should not know how many turns he has (only the Umpire or opponent, if no Umpire can be found).

Maximum and his Orcs are trying to escape from the new Emperor Bennydictimus who doesn’t like his predecessor’s favourite and wants him dead. Four Praetorians who tried to fulfil the Emperor’s desire now lie dead in the woods.

Boris and his Halfling warband have missed the big battle between the Orcs and the Halflings (known in the history books as The Great Halfling Barbeque) and are desperate to find some spoils of war to take home, even if it is only a couple of Orc heads (that would looks so nice on the mantelpiece in his hut).

This action should be fought on a small table (no larger than 4’ x 4’). The board is a shallow valley with a dirt road running down the length with heavy woodland along both table edges. 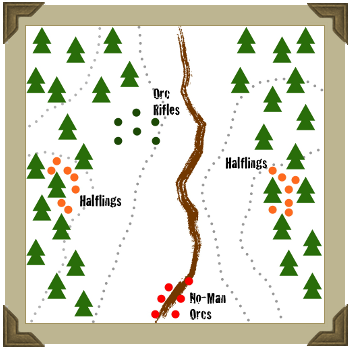 Having been absent without leave since the magicky attack on them at Badajobz, Sharke is worried that the provosts will give them short shrift if and when they make it back to Valon. These noncy looking Orcs in skirts appear to be carry an eagle and some other treasure which if the Rifles could capture would see them back in Wheeling-Turn’s good books.

Maximum and his loyal orcs are trying to escape Bennydictimus and have stolen the Emperor’s Ass. They need to head north as quickly as possible and exit the board. Casualties must be kept to a minimum and the Orcs need to be vigilant against attack from those bloody halflings.

Boris is pissed off. He missed the battle. He has not got any treasure. He hasn’t got any heads. The Halflings must get some Orc heads and if they can get some gold as well, Boris will be a happy little chap.

As with Sharke’s Panzerfaust I have deliberately left Sharke’s Aquila a bit rough and not been too perscriptive. Given the disparity in weapons types it may be necessary for the Umpire to balance things as the game develops (if the Rifles are too powerful, a few damp powder rolls can level things up).

A sudden flash of sepia, a taste of ozone and Sharke once again found himself falling through time and space. He blacked out…

Sharke's world hopping adventures will continue here on Orcs in the Webbe in 2013 in "Sharke of Mars"...

An Orcs in the Webbe Original! "Sharke's Aquila" was written exclusively for OITW's 2012 Advent Calendar and was first published on Sunday 23rd December 2012.