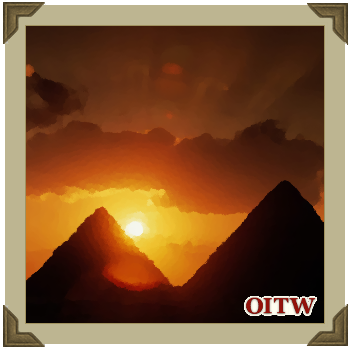 In the days after the Armorican invasion of Aegypt many thought to make thier fortune stealing the gold hidden underneath the ancient pyramids. They did not relise the gold had not been left unguarded...

In the days after the Armorica invasion of Aegypt the elves heard stories of ancient treasures which were hidden under the Great Pyramid. A group of enterprising elves lead by a “Captain Le’Thief” made plans to sneak out of camp and break into the pyramid; but “Mavic the Untrustworthy” an Othari working for the Armorica army overheard their plans and decided that he would steal the treasures before the elves and promptly recruited some greedy associates for the double dealing deed.

Both groups of tomb robbers broke into the pyramid from opposite sides at the same time, determined that no others would stop them getting all the booty. Unknown to both parties, the treasures were still guarded by ancient horrors that will not stop until all the tomb robbers are dead.

You can create the tomb under the pyramid out of dungeon floor plans or make your own or use dungeon terrain or place piles of books on the table. Make sure there are many different size chambers with at least two ways to enter them, with plenty of ways to move around the tomb to keep the game fluid and a number of entrances on the table edges which each players' section can enter and leave from.

Each player in the game will need to make up a section of equal points (300 points or less). A number of mummy miniatures will also be needed. You could play this scenario with more than two opposing players.

Three types of treasure counters are needed; Treasure, Nothing and Mummy counters (I suggest in equal amounts). The number of counters depends on how long you want the game to last (Though you could set a time limit for the scenario).

Place the treasure counters randomly face down across the table at the start of the game. If a character moves onto a treasure counter (one per turn), the counter is revealed with the following results;

Treasure: The character has found some treasure. They can only carry one treasure counter at a time. If they are pushed back or killed they drop the treasure and it then can be picked up by another character which is not in combat.

Nothing: The character found nothing of value. Remove the counter from the table.

Mummy: The character is attacked by a Mummy (Class as a Zombie Savant), which will keep attacking the character or move towards nearest character and attack them, until killed (Mummies take their actions after everybody else has had their actions).

You will probably find that you will need to make some rules modifications to play this scenario, like not using the move modifiers for moving inside buildings and since most of the firing will be at close range, ignore the low light rules.

The winning player is the player who escapes the tomb with the most treasure counters.

I wrote this scenario as an outline, so you can make the game any size as you like and use your preferred Flintloque miniatures. You could even play the scenario as a multiplayer game.

This article was written exclusively for Orcs in the Webbe and was first published on the 15th December 2013 as part of it's 2013 Advent Calendar.