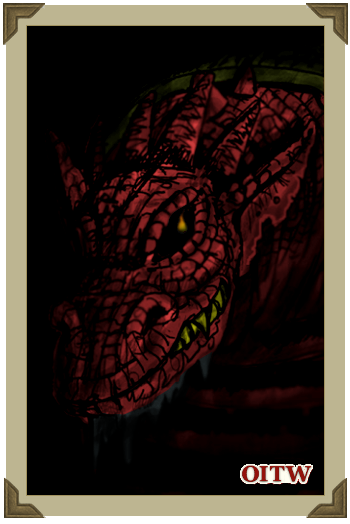 Having narrowly escaped from the Blood Lords hunting party the Dracci Satule and the other surviving rebels must try and make an alliance with the Orcs of Albion if they are to stand any hope of stopping Murg's bid for ultimate power in the far East.

You can read the first chapter of this story arc here on Orcs in the Webbe.

“What say the Orcs?” queried one of his brethren as the Dracci refugee Satule took a place by the fire, dropping his thick cloak to the ground.

“I have arranged a meeting. One of their number, goes by the name of Wo-Gan, has been asking questions in the surrounding villages about the mysterious red armoured strangers in the woods.”

“You shouldn’t have allowed yourself to be seen, they could have told the Elves”

“We had to make contact with the Orcs somehow, if we are to stop Murg from recovering anything of value from the ruins of the fallen city we must find allies. We are too few in number to do anything by ourselves. The goblin villages in this region were our best chance. They have no love for the Elves and have never heard of the Dracci.”

“I know that old friend. But after Jaanen’s betrayal I find it difficult to trust anyone anymore.”

Satule sighed and nodded, he too has been shocked by Jaanen’s actions but their only hope lay by forming an alliance and with the Elves having a racial hatred of his kind the Orcs were the only possible route they could take.

Satule continued, “The meeting is arranged for just after midnight tomorrow, at the tavern in the next valley. I am to go alone and meet with this Wo-Gan.” Satule quietened the various disagreements with a wave of his hand. “We have to trust at some point, but as you said, after Jaanen I cannot risk anyone else’s safety, I shall go alone and make contact, you will remain in the woods keeping an eye on things. We do not know if the Blood Lords managed to track us after we lost them in the swamps and we also don’t know if those damned Elves in the ruins have managed to pass word back to their superiors yet. We need allies and quickly before Murg finds anything he can use”

Believing themselves safe in an Al-Garvey inn the Dracci rebel leader Satule and the Albion spymaster Wo-Gan are discussing how Wheeling-turn’s Orc can help stop Murg and his advisor Procesh from gaining too much power in the far East. Little do they know that several forces are closing on the inn with nothing but intent to harm on their minds.

If you are playing this as part of the full campaign then you should only use the survivors from the first scenario. If Satule got it in the neck in your version feel free to place whoever now carries the Lodestone in the inn with Wo-Gan.

Full rules for Dracci in Flintloque 3rd Edition can be found here on Orcs in the Webbe. In this scenario, the worker caste of the Dracci, with the exception of Satule, despite being Dracci Warriors do not roll on the Wylde Magicke table. Satule, however, has magical abilities granted him by the fragment of Lodestone he carries. These should be rolled for at the start of the scenario as per the normal rules.

You can use six of the Dracci Warriors pack (95540) to represent the insurgents. They should be armed as per miniature.

(These rules are reproduced here from the free to download Sharke’s Chosen insert which you can get hold of direct from Alternative Armies. The miniature to represent him can be found in that pack.)

A staunch ally of Reckhardt Sharke as well as an officer of the engineers and more importantly General Wheeling-Turn’s spymaster in Catalucia, Major Wo-Gan buttons his coat up tight over many duties. Often undertaking dangerous but vital missions in enemy territory. Wo-Gan is an officer who knows what is what and who is who.

Wo-Gan is a Bog Orc with Veteran / Engineer / Elite status and armed with a Sword and Standard Pistol. He has the following skills and traits: Improved Discipline (2), Alert, Stealth, Jamminess, Nerves of Steel and Jammy Wound. Special Rules: Wo-Gan is a spy master and each turn he is in play he inflicts a massive -3 to all enemy initiative rolls and he may remove 1D6-1 Shaken Tokens from any allies character in play including himself.

For Satule and Wo-Gan to escape off the table with as many Dracci rebels as possible. It does not matter from which table edge.

Again, if you are playing this as part of the full campaign then you should only use the survivors from the first scenario.

Overseer Hukr is a Dracci Lord (use 95541-01), the other three are Dracci warriors. They all roll on the Wylde Magicke table as normal. Sudash (who should be represented by the Dracci with the staff and fragment of Lodestone from 95540) is a specialist mage and as such may roll four times in total on the table.

The Dracci war party failed in the swamps and will not do so again. They found the Goblin go-between that was working with Satule and Wo-Gan and ‘persuaded’ him to tell them everything. Thier goal is to kill the bearer of the Lodestone (be it Satule or anyone else) and return the fragment to their masters. Unlike the first scenario they now know exactly who is carrying the fragment. They must make a special action searching the bearers body after they are OOA or removed from play (use a marker to show where it is) body to find the Lodestone. The fragment can be carried for no penalty and passed between other characters.

After a series of humiliating defeats against Sharke and his Rifles, Gautier’s section was posted to the frontier as border patrol where they were expected to die in ignominy. However, whilst there they saw two groups of Dracci fighting each other in that forsaken wilderness. Determined to capture one to make up for his failures against Sharke, Gautier has tracked them to this valley, he has not yet told his superiors about what he saw. He wants to be the one to present the Dracci to the Emperor himself.

Either use the section as it looked at the end of the first scenario, generate a new section using the normal rules or use the example Ferach Elf section from the rulebook.

Gautier just needs one Dracci, living or dead, to reclaim his position as a stalwart member of the Imperial army.

This scenario can be expanded in many different ways. Any unit that could find itself in Al-Garvey during the Mordredian wars could stumble upon the events taking place this night. Three you might want to consider if you are looking for a few extra forces to field:

Sharke’s Rifles - Sharke and his boys have heard about Wo-Gan’s daring meeting deep in the wilds of Al-Garvey and are en-route to see if they can’t lend a hand.

Froderorcson’s Scouting Party - You can of course throw the Albion scouts from the first scenario into the mix. They could have followed Gautier or the Dracci to this place and realising that Wo-Gan himself is in danger, rush in to save the day.

The Enraged Goblin’s of Al-Garvey - A group of Goblins, be they soldiers or natives (use fantasy Goblin miniatures) are looking for the missing go-between. Last known to be talking with the ‘red armoured’ creature and the fat Orc with the moustache, they will do anything to find out where their missing boy is.

Use a 36 inch square playing area. The whole playing area should be covered in small areas of brush with individual trees dotted about. In the centre of the board is the inn. Use whatever terrain you have available, miniatures in the inn should have some kind of defensive bonus. The entire table should be surrounded by a layer, one or two deep, of trees witha road running from one edge, past the inn and of the other edge. The road is considered Clear terrain, the rest of the playing area counts as difficult terrain.

As it is night time so the full rules for nighttime encounters found in Grapeshotte should be used.

As the scenario begins Satule and Wo-Gan are in the inn and unaware of the approaching threats. They can not be activated until an enemy group ‘enters’ the inn or a loud noise (gunshot, immolated elf, etc) is heard.

Likewise the Dracci rebels in the woods do not know of any approaching problem but are on the lookout. At the start of the scenario the rebels marks down secretly where their camp is. The other players (be they Dracci, or optional ones) all know to make for the inn and can approach from whichever edge they want placed in Initiative order on the first turn. The Dracci rebels can not be placed (and in turn move) until they have ‘spotted’ trouble. At the start of each turn roll 1D10 adding the number of enemy groups on the table and the current turn number, on a roll of 12 or more they activate that turn.

So it continues, after a longer than expected gap (isn’t it always) here is the second part of my Dracci ‘epic’ story arc. The Dracci are part of the world of Valon and a great way to reinforce that it’s supposed to be a fantasy land - despite magic’s waning it’s still there, you just have to look for it. Without the fantastical and magical elements Flintloque is just a so-so Napoleonic skirmish ruleset with nice looking miniatures. The Relics campaign is my main thrust at strengthening this idea in the minds of Flintloque players everywhere.

The scenario above was based on a long since disappeared Games Workshop US Lord of the Rings scenario in which four of the Hobbits and Aragorn had to escape from Bree as the Black Riders drew close. It's changed a bit since then... but not much ;)

My original write up for this scenario dates from 2005 and wasn’t anywhere near as fleshed out as the first scenario had been. In fact all it consisted of was the following short paragraph.

Ambassadors ??? – The Dracci freedom fighter, Satule has fled his homeland to Albion in order to meet with General Wogan. They realise their best chance against the Blood Lords is to get some allies. As the reappearance of the Dracci is bound to cause uproar a secret meeting has been arranged between Wogan and Satule. Satule and Wogan must get to the Inn and meet up. They must then escape as a Ferach patrol has heard rumours that Wogan is in the area.

This article was written exclusively for Orcs in the Webbe and was first published on the 9th May 2013.