A Flintloque mini campaign set during the Ferach retreat from Moskova.

Chapter Three: 'Just Get The Hell Out of Here!' 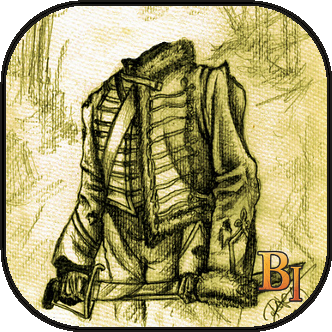 Adapted from an Image by Pete Barfield

Margahrah and his surviving Elves must escape from the frozen North in this, the final instalment of the Flintloque mini campaign, Getting Ahead.

Halloween 2011 saw the publication of a short story along with the first of three linked scenarios collectively titled 'Getting Ahead'. This is the third and final installment, 'Just Get The Hell Out of Here!'.

I also wrote an article on how I created these abominiations for use in your games of Flintloque, it can be read here (returning soon to OITW, Craig - Ed.).

Margahrah knew that time was pressing. The Witchlands horde had made it clear they did not want the Ferach to succeed in their attempts at rescuing the Halfling Posco Brockhouse. He was way too valuable a treasure to be allowed to slip through fleshless fingers.

With the snow storms easing and the muddied ground now solid with frozen ice, this was Margahrah’s perfect opportunity to put some distance between his tiring force of Ferach soldiers and the shambling mass of the relentless Zombies. Ahead was yet another bridge spanning the yet another chilling river. Margahrah chivvied along the tiring Ferach soldier next to him who was so bundled up with odd scarves, threadbare coats and scraps of material that it was hard to identify who he was. Behind them the Halfling stood-out like an Ogre. Margaharah turned back, head down and plodded forward knowing that every footstep forward was increasing the chances of catching up with the Armee de Nord.

Hours passed as the soldiers stumbled forward. Step after step after step. Minds numb with cold, tiredness and hunger. Margahrah and his Ferach inched forward.

Margahrah’s head tilted. There was a noise, something not natural. Something like a wild howl was just perceivable over the screeching wind. Margahrah turned slowly to search the grey waste behind him. At first there was nothing, had he imagined it? Was the wind playing tricks with him? Tired and exhausted he was about to resume his trudge forward when he saw the first formless shapes. Zombies – that lolloping gait was unmistakable. He estimated at least a regiment.

There was little time to loose. Margahrah shouted, pushed, and in some cases kicked the tired Ferach into action – their steps increased as adrenaline kicked-in. The pace increased and the distance to the wooden bridge diminished.

At the bridge – the Ferach set simple charges of black powder and odd rags and as the last of the exhausted soldiers crossed the fuses were lit. Even in this cold and wet landscape the rotten wood caught quickly and within minutes the whole bridge was alight. The flames slow at first to take grip, but soon Margahrah knew that the bridge would act as a break and allow his group to gain some ground.

All eyes were drawn back to a screeching zombie; his tattered uniform well alight was a shocking sight to all. The zombies were being herded forward over the burning bridge, through the licking flames. It was a horrifying sight. The first sub-human form stumbled forward and fell, charred and steaming, in the dirty snow. As he fell some of his cartridges caught and there were a few cowering heads as the Ferach ducked, thinking they were under fire.

The watching troops looked back with awe as Margaharah started to shout orders; “Move! Move you fools! Let us make the most of our good fortune and place as many leagues as possible between us and those inhuman wretches. Move!”

Soon with all the effort they could muster they once again took up the retreat.

Note: DITS below refers to 5026 Flintloque: Death in the Snow.

Margahrah’s Elves – Margahrah himself is detailed below. Margahrah is accompanied by the same unit as in Chapters One and Two. The dead should be replaced and experience awarded as per the normal rules (DITS, p.43). Any dead replaced in this way represent stragglers from other units lost in the Witchlands.

Acting Captain Margahrah, formerly of the Commissariat Dept. of Lyonesse Veteran Ferach Militia Margahrah carries an Exquisite Quality Sword given to him by none other than the Emperor himself and a pair of hand engraved Ferach Elf Duelling Pistols. Margahrah saw almost everything as a member of the commissariat back in Lyonesse and as a result is not fazed by most things and benefits from the ‘Don’t Fear The Reaper’ trait (DITS, p.53). As a non commissioned officer unknown to most Elves in the Witchlands campaign he still suffers from the ‘Raised from the Ranks’ flaw (DITS, p.52).

The Undead - See the special rules below, make sure to include the third gargoyle mentioned in the previous story as well as Lodemai, if she escaped.

Lodemai
Veteran Vampyre Light Troop
Lodemai carries an Exquisite Quality Sword that is ornately detailed and encrusted with dark emeralds. Lodemai has been around for a considerable amount of time and has acquired a few skills along the way. She has both the Vampyric Lunge and Vampyric Reaction skills. She also has the trait Vampyric Disdain. Lodemai’s psychological state is Artistic (DITS, p.67) Lodemai also has Blood Magicke. She has the spells Mesmerism, Mist Form and Phantom of the Skies (DITS, p.79). However the Mesmerism is already in effect on Posco (2 turns remaining - see special rules below), she will also keep Phantom in the Skies and Mist Form as a means of escape.

Posco Brockhouse - If he survived, should be controlled by the Ferach player. Posco is a Veteran Halfling Light Troop. Statistics for Halflings can be found in the Flintloque Racial Table which is available as a free download from the Flintloque 3rd Edition Files section of the Notables Yahoo group.

The burning of the bridge had allowed the Ferach some breathing space but Margahrah knows the undead horde does not sleep, does not eat, does not rest and soon the same howl will be heard moving up from behind the group.

Margahrah and his Ferach soldiers have but one aim, to get back to the ranks of their companions. Margahrah knows that he cannot allow the snivelling Halfling Posco to be captured. If all else fails – the last shotte will be directed at his head, the last sword strike will be to remove his head from his worthless body.

The pursuing force of shambling zombies, pushed on by rabid Liches must capture the Halfling Shaman, his knowledge of shrinking heads and raising the dead is too valuable to be allowed to escape – The Star Wraith himself has decreed it.

See the special rules below.

The Chase: This game takes the form of a Steeplechase with three game boards each 2 foot x 2 foot laid out in a line. As the fleeing Ferach enter the third gaming board then the first is taken up and placed at the front forming a rolling terrain style game.

Each turn there will be the chance of marauding undead encountering the bedraggled group, similarly (if very lucky) a Ferach rear guard may be encountered - mounted Ferach outriders perhaps who will act as a screening force to aid the retreat?

The key to a steeplechase gave like this is variety in the units that may (or may not) appear. The best way to work this out is to look to your own collection and see which figures you have available for use in this theatre of war. Once you’ve created some example units (or use the example sections in the book) assign each a number and at the start of each turn follow the following procedure:

As with any game of Flintloque the key thing to remember is to have fun so don’t be afraid to change the roll is things are too lively or a little too slow.You can also use randomly generated terrain for each board to liven things up, once again look to your collection to see what you have.
You can see a fully fleshed out example of a steeplechase scenario here on Barkign Irons in my Foul Mouth Freddy adventure 'Foul Mouth Freddy Speeds Through the ****ing Forest'.

Solitaire Play: You can play this scenario solitaire using the normal rules (DITS, p.90) to control the Undead force.

If you have access to the Grapeshotte rulebook the following two optional rules can be used:

Foul Weather (Grapeshotte, p.21): Roll 1D10 before play begins, on a 1-5 there is no adverse weather. On a roll of 6-8 it is Windy for the scenario, on a roll of 9 it is Snowing and on a roll of 10 there is a Blizzard. All characters in play are counted as having a Wrapped Lock.

Night Fighting (Grapeshotte, p.21): Margahrah and his detachment of Elves have arrived at the abandoned farm just before dawn. Knowing that waiting could unleash Buon-Partee only knows how many ‘Headless’ Undead upon the world, he leads his Elves in without delay. As a result this scenario should be played using the ‘Night Fighting’ rules.

The whole concept for the ‘Getting Ahead’ mini-campaign came out of an idea of mine for a short story – a White Liar tale actually - which just grew and grew.

Ever since this campaign was conceived I saw this third and final instalment as a steeplechase style game where Margahrah simply has to escape from the frozen North. Craig Andrews, the Editor of this website and owner of Orcs in the Webbe, came up with some splendid Hollywood style ideas but due to a combination of his work commitements and over complexity I decided to, as the old adage goes, keep it simple stupid, and go ahead with my original idea.

Special thanks go to Steve Blease, whose simple but effective mechanic for appearing troops I borrowed for this scenario.

I hope you have enjoyed playing this Flintloque campaign as much as I have writing it.

I'd like to apologise to Tony for the delay in this third and final chapter being published. The delays were entirley my fault, I ended up writing something a little too ambitious. My thanks go to Tony for his understanding and patience. One day, when I get a bit more time, I'll finish off my alternate scenario and publish it here or over on Orcs in the Webbe. I just need to write the rules for a steam train...