A Flintloque Unit Background and Mini Campaign by Adrian Banfield

We are introduced to a group of brave lads who dfend the streets of Albion's capital against a myriad of nefarious ne'er do wells in this Flintloque mini campaign.

Having recently carried out research into the Bow Street Runners, the forerunners of today's police force, it occurred to me that it would be possible to use the Runners in Flintloque.

The Bow Street Runners were formed in 1749 by Henry Fielding, a Bow Street Magistrate. His blind half brother Sir John Fielding, 'The Blind Beak' took over the running of the Runners after Henry Fielding died in 1754. Initially, there were eight plain-clothes runners. As time went by foot and mounted uniform runners were created. The Runners eventually had authority to travel anywhere in the United Kingdom in the pursuit of criminals. It wasn't unknown for them to travel abroad. The foot and mounted patrols were known as 'Robin Redbreasts', on account of their red waistcoats. By the late 1810's, early 1820's the Runners were at the height of their fame.

The Runners successfully arrested the Cato Street conspirators in London on February 1820 after a fierce hand-to-hand fight. The conspirators known as the Spenceans planned to kill the British cabinet. Runners other duties included guarding Royalty, stopping duels and investigating thefts and other crimes. Robert Peel became Home Secretary in 1822. He opposed the Runners and fought to have them replaced by a new police force, the Metropolitan Police. Peel finally achieved his aim in 1829. Although the plain clothed Runners remained separate from the Police they remained in existence until 1839. The Runners badge of authority was a crown tipped baton.

Several of the Runners were famous in their day. These include John Townsend who guarded Royalty and was an expert on highwayman. Townsend started his career under Sir John fielding and was still working as a runner in the 1820's. George Ruthven led the runners intothe building where the Cato Street conspirators were hiding. Henry Goddard joined the runners in the 1820's and remained a Runner until they were disbanded. Goddard left behind a diary of his cases. Other runners included William Ballard, John Sayer and Vickery.

A brief History of the Albion Street Runners

'There's no escape for the criminal' - Unofficial motto of the Runners.

The Runners have been in existence in Albion for as long as anyone can remember. They were formed to deal with the criminal elements of Orcish society. The Runners’ reputation has been built on honesty, fairness and hard work. They tend to be mainly Orcs, but Runners from other races have been accepted if they can pass the gruelling tests. Possibly the hardest test is 'The Hard Run'. A veteran or experienced Runner takes an average Runner out on a difficult mission. If he passes, he is granted the status of an experienced Runner. The Unit's H.Q. is in Albion Street, Londinium and the 200 or so Runners operate throughout Albion and in Embassies of their Allies throughout Valon. The head of the Unit is the Chief Magistrate, Lord Brassington.

The Runners’ badge of authority is a black top hat with a discreet scarlet top hat shaped badge on the front. Though dressed in civilian clothes, most runners traditionally wear a red item of clothing. Whether it be a jacket, waistcoat, shirt, gloves and so on. Harry 'Eldarado' Benton, the Runners representative in Catalucia wears knee length red boots.

The Runners work in pairs and tend to favour pistols; swords or clubs (a large improvised weapon), in the cities and towns, as there is a lot of hand-to-hand fighting. Veteran and experienced Runners partner an average or raw Runner. As the veteran and experienced Runners tell the raw recruits, 'You can't arrest your Orc from a distance'. Out in the country though they tend to carry Orc Bessie muskets.

In the present crisis, the Runners have found themselves working alongside the Army on special missions, chasing and apprehending enemy spies and guarding key military figures.

Many of the veteran Runners have become legends, several in their own lifetimes. One of these is John Townhall those adventures awe new recruits. When they ask how he was able to deal with four armed Orcs robbing a coach on his own he replies, 'When you can see the red of their eyes, you know you are in pistol range'. Other famous veteran Runners operating at the present time include Napoleon Soho and Harry 'Eldarado' Benton.

The Runners are considered a regular unit. Veteran and experienced Runners when firing their pistols move one column to the left. None of the Runners receive any additions for firing Orc Bessie muskets. All Runners receive +1 for fighting with a sword. Any raw Runners within 10cm of a veteran Runner receive +1 to their morale.

There are plenty of Flintloque/Deadloque civilian figures available that can be used as the runners. I decided that my runners are to be called the 'Albion Street Runners' would all wear top hats. Examples of figures available include Ian Phleming, Lofty Halfing Halforc, Colonel Augustus O'Toole, (a runner if ever there was one), an Orc deserter, Void Grossman and so on.

Scenario One: The Bank of Macbeth Robbery

The Plunkorc (vet/standard blunderbuss/sword/) and MacMean (exp/Rat Short musket/pistol) Gang are in the progress of robbing the Bank of MacBeth. Hamish, an Orc, (raw/Orc Bessie/whip, treat as a large improvised weapon) is riding a Scottish Highland Cow (other breeds variety) with a cart attached, the 'getaway vehicle'. (The cow cannot charge if the cart is attached. Takes one turn to un-attach or re-attach the cart.) The fourth member of the gang Jock (Av/two pistols) is an Ogre Deserter. There are two standard grenades in the back of the cart.

When Jock is throwing a grenade, shift one column to the left. At the beginning of the game, Jock is carrying all of the loot, so cannot fire until the loot is placed on the ground or in the cart. Jock can walk and put the loot on the ground or in the cart in the same turn. (Note, Jock is the only character in the game that can carry both bags of loot, although the cow can pullthe cart with both bags of loot.) Other characters can carry one bag of loot and fire a pistol or fight with a sword, with no penalty. Hamish has positioned the cart 15cm away from the entrance to the bank. (He didn't want to pick up a fine for parking on a double yellow line.) The cow can only trot or walk irrespective of whether there is one or two bags or loot in the cart. No character can travel on the cart. Place several barrels and boxes in mutually agreed locations. 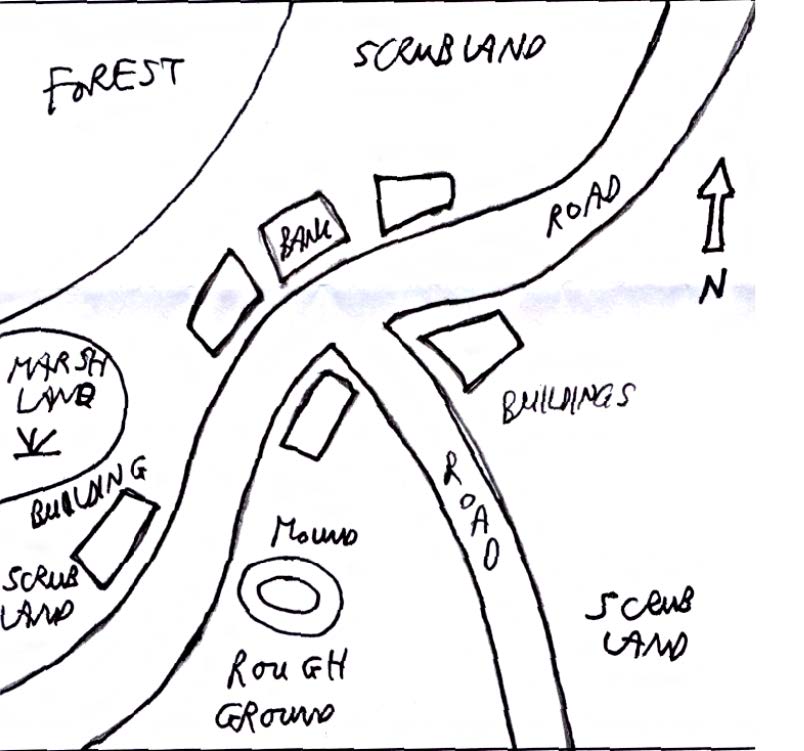 Four Runners under the leadership of John Townhall (vet/pistol/sword), arrive on the scene as the Plunkorc and MacMean gang are exiting the bank. George Ruthohno, exp. [name from the Archers & Dead Ringers], is armed with an Orc Bessie musket and a pistol. Edward Blackrock, avg. is armed with a High Elf pistol and sword. The fourth member of the team is Henery Gobbs (raw/Orc Bessie/sword.) All of the Runners are Orcs.

For the initial set up please see the map below.

Nine members of Obidiah's Army have raided a lonely farm, killing the farmer and taking two female Orcs to the barn with the intention of’ taking liberties with them’. However, their raid has not gone unnoticed and a party of six Runners arrive to save the Orc ladies honour. Townhall, Ruthohno and Blackrock (all carrying the same weapons as in Scenario One) have been joined by their colleagues Saywhat (exp/pistol/sword), Vicks (avg/Orc Bessie/sword) and Henry Gobbs, (raw/ Orc Bessie/sword). Both of the female Orcs, Agatha & Christie are raw and will fight with large improvised weapons.

(Miss Catherine and one or two of the female Orcs from the Camp Followers Set can be used as Agatha & Christie.)

The barn is three feet long by two feet wide. The Deserters are at the back of the barn and the Runners appear through the entrance at the other end. This is the only entrance/exit in the barn. Place several bales of hay or boxes in the barn in mutually agreed locations.

Whichever player has the most figures still standing at the end of the tenth round is the winner. The deserters have no intention of running, as they have old scores to settle with the Runners. And anyway, they don't want the Runners alerting the authorities to the fact that deserters from Obidiah's Army are in the surrounding area. 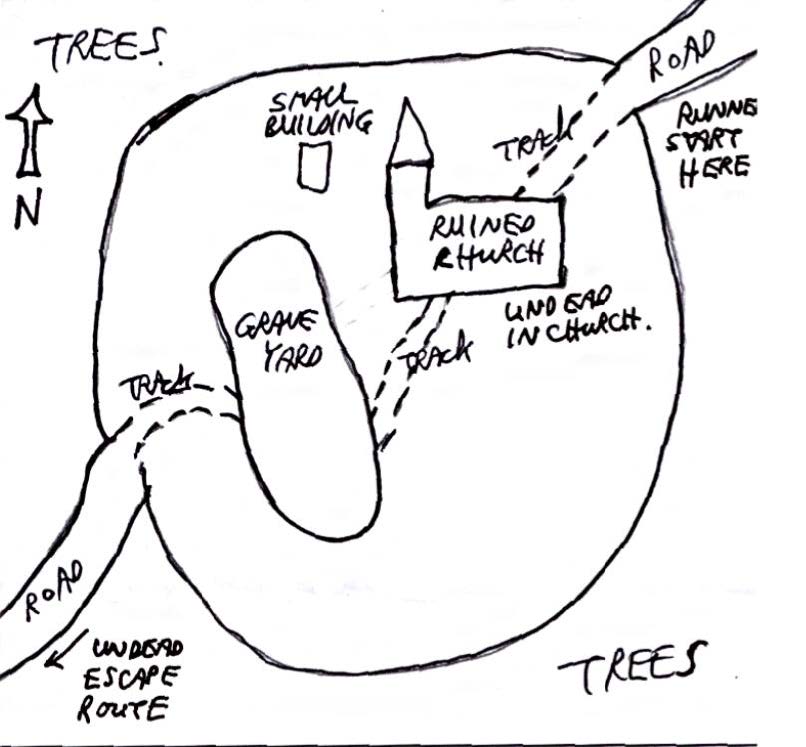 The Albion Street Runner, Napoleon Soho having heard a rumour that an Undead spy in a red cloak is operating in Albion, has been charged with tracking down the location of the Vampyre spy, Count Lupe. Soho's 'eyes and ears' are finally able to tell him that the spy's location is in an old abandoned church on the outskirts of Londinium. Soho in company with three of his fellow Runners and four Orc Hussars race to the scene. Count Lupe though is aware of Soho's plans and is preparing to flee Albion.

Count Lupe (worn, avg/Ferach pistol/sword), resplendent in his long red cloak and his two bodyguards are preparing to flee along with their cavalry escort. They start in the ruined church. Select the Vampyre's magical spells as in the Deadloque Rules. Note that the 'Evil Mist' spell is not available for this Scenario. If a six is thrown, the Vampyre fails to receive a spell.

The two bodyguards are both Werewolves. Both are fresh, exp/standard musket/axe. Both of them will sacrifice their lives for the Count. A section of five Zombiski Cossacks have just arrived to escort the Count to safety. The leader is fresh/sword/axe/six wounds.

Four regular Hussars accompany the Runners. One trooper is exp, two are average and one is raw. All are armed with a carbine and a sabre. Count Lupe wins if he is successful in escaping the scene into the forest via the track beyond the churchyard. The Runners win if they are successful in capturing or killing the Count.

Originally published in the Loque and Load magazine in the Spring of 2002. It first appeared on Orcs in the Webbe on the 4th December 2008 as part the 2008 Advent Calendar.

It was absent for several years due to a prior regeneration of the website not transferring everything over correctly, the wrong has now been righted and it returned on the 12th November 2014 as part of Orcs in the Webbe's ongoing Flintloque Archive Project.