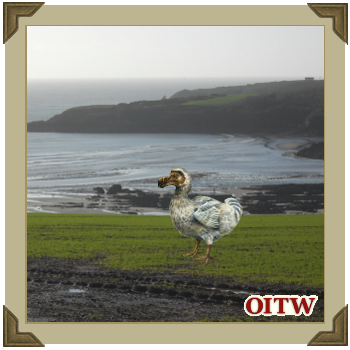 We return to a time long before the forbidden love twixt Goblin and Frog tore apart the somewhat boisterious yet loveable town of Tarrwen Harbour. Two excitable young Hobgoblins must capture the Cryptmass dodo before the annually formed Mob of Ten can bring them back for punishment as tradition (bless it) dictates.

“One Christmas was so much like another, in those years around the sea-town corner now and out of all sound except the distant speaking of the voices I sometimes hear a moment before sleep, that I can never remember whether it snowed for six days and six nights when I was twelve or whether it snowed for twelve days and twelve nights when I was six.”

The snows have landed upon Tarrwen Harbour in a time before troubles began.

When Llednevir existed as a region of stillness and all was well (within Sentinel’s plan).

For the grown-ups, grown idle and unimpressed by age, the snow black, crow back blanket of time has dulled their sense of wonder at a world changed by winter.

For Owen Mab Plod and Lleu Map Lleu, he of large proportions the snow is another adventure and a quest from hillside to lighthouse with only a little stolen brandy and apples to sustain them on their querulous quest.

Beyond the bounds of Llednevir Hill is the hollow where the boys made camp and in the stupor of purloined booze they slept one night away (we do not talk about what occurred that night).  Suffice to say that on the following day they were snowed in and not only lost but they would be facing a hiding from their fathers to whom they had sworn an oath not to go too far nor would they get lost. For the day after they set out was Cryptmass Day and their task was to catch the dodo.

A tradition each year for the older boys of the village, to become young men of the cantref, was for them to set out into the woods and find the dodo, bred and released by Reginald Nauemann, The Butcher of Tarrwen Harbour.

To catch the dodo and make it home is the aim of these two heroes.  To pass unnoticed and not get caught by the worried grown-ups was a bonus.

In the high woods beyond the trees is where our two heroes begin this scene.

For fifteen turns before the dodo has been wandering before and may now be close to the town or far beyond the bounds.

But as the Dawn of Tarrwen Harbour breaks the search party also laves with birch in the hands of the grown us and punishment in the minds of the troops.  For the grown-ups have had to get up early (as tradition dictates) and search for the two young boys who have stayed out over late.

To catch the dodo and stay out of sight is the aim of our chaps.  If seen they must flee and hope the dodo takes flight.

Once caught the dodo will be most docile, for it has been drugged all the while.  To the light house the boys must go and Llednevir made all aglow.

But if the boys are caught after sundown, it shall be thrashing of front of the town.  For such is the way of olden times and there was little entertainment in colder climes.

The game starts at the dawn at the outskirts of the town. The boys (hung over) start outside of the bounds of the town, beyond the tree line.  The dodo’s location is determined before, starting at the butchers and 15 moves henceforth.

The men of the town, ten in all, begin at the Town Hall.

Their job is to capture the boys and the dodo with liquor being their reward.

This scenario takes place in the woods near the town of Tarrwen Harbour which is just 'off table' to the West (left table edge). Adjacent to the edge near town you should have some scenery representing the lighthouse. On the other edge of the map the two Hobgoblin youths, Owen and Lleu, are placed within 5cm of the map edge

The dodo in placed in the centre of the Western edge and then moved fifteen times at Quick March (30cm) in random (Rolling a d12 using the clockface method each time for direction) to ascertain her starting pace at the commencement of play.

The Mob of Ten start at the same place that the dodo did, having left the town hall, at far end of the high street and headed to the edge of the woodland prior to the scenarios commencement (saving significantly on necessary terrain). They must then must seek out the two boys and maybe even the dodo.

This game lends itself to solo play using the standard Flintloque bolt on rules. However should two players be involved then the townsfolk player must remember that they are obliged to seek out the two older boys rather than just forming a ring around the dodo.

Heroes – Get the dodo. Defeat it in a round of Melee combat and get to the light house.

Townsfolk – Get the boys and the dodo back to the townhall. Capturing the boys requires a sustained victory in hand to hand every turn to show the attempts at restraint while the heroes seek to escape.  The boys (and dodo) must then be carried to the town hall.  On each turn the boys may seek to escape by winning the round of combat.

Because there are always some, right kids?

For each turn that one of the Mob of Ten engages one of the youngsters in combat, a member of the remaining Tarrwen Harbourfolk decides to break the rules and assist the young Hobgoblins in escaping by leaving their house and, some would say mystically quickly, charging into combat on the side of the boys (simply place them in Melee next to one of the boys attackers). Once they have finished the current attach they come under the full control of the hero player. This only happens on the first melee attack each turn regardless of which of the boys is attacked.

All damage in considered subduing damage until people get too excited as we all know that happens eventually. Each turn roll 1d10 and add the number of the turn. If the total is 10 or more then all damage dealt that turn in lethal damage not subdual. When this happens the game takes a much darker turn...

The Eternal Clock Ticks By...

If there is a death, and let’s face it a dead youth is easier to restrain, then the town’s forgotten gods take note.  A storm picks up blowing inland from the sea. A name is heard on the growing winds... Dagontwyswithchips...

This game has a time limit and as soon as a death takes place a countdown starts.  Roll a D10 and take away the number of the current turn. That many turns remain before the game ends.  This places a greater incentive on either side to up their game and get the dodo home.

For once the game ends and mysterious ship is seen upon the horizon and ALL stop to take note.

All the villagers watch the wreck of La Storia wash up on the shores on Tarrwen Harbour.

An Orcs in the Webbe Original! "A Child's Cryptmass in Taffsea" was written exclusively for OITW's 2014 Advent Calendar and was first published on the 10th December 2014.