The Emperor in Peril!

"The Emperor in Peril!" 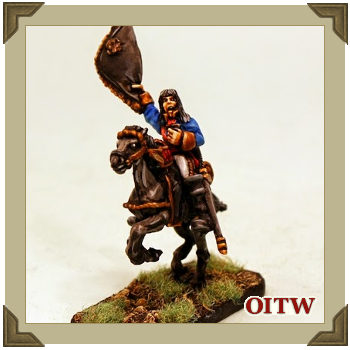 The Dark Czar, angered by Mordred's refusal to die under his onslaught of undead, has sent the Monghuls of Tartarus to take care of Emperor once and for all.

The Dark Czar was troubled. For centuries now he had ruled over the Witchlands with no interference except for the odd uprising of some upstart vampire. Vampires were as children to the Starwraith, and could be of no true concern. True, the Monghuls had been such a threat once, but had he not bent them to His will? Then came the Usurper Mordred. The Dark Czar’s best stratagems only partially succeeded.  Moskova was burned, The Grand Armee army was in retreat, and yet Mordred lived, the most unpardonable of sins. Liches of the KGB had brought disturbing news from the battlefield. Mordred, it seems, could not be approached by any zombie. Further research in the archives of the Witchlands determined that Mordred’s power ring prevented any on dead from approaching the Upstart closely. Well there's more than one way to skin an elf as they say. Aleksander sent for the Monghuls of Tartarus.

Tartarus is a region of the Witchlands steeped in mystery. Far to the East of Moskova, Tartarus is a land of fire and ice, life, of a sort, and death. From time to time over past ages the fires of Tartarus have erupted with cataclysmic force. Spewing ash and flame high into the air and spewing the Monghuls out onto the steppes. The Monghuls are a Ghoul people, born to the saddle, raiders of the highest order. It is said that such is Alexander’s respect of their abilities that he made the Zombiski Cossacks in their image.

As was his practice Mordred began every morning with the ride to scout the enemy’s dispositions. Ideally Emperor should never travel about a large escort.  General de Herne, the Imperial Master of the Hunt, did his best to realize the ideal, but Mordred often had other plans.

The Emperor’s Power Ring ensured that that the undead were powerless against him. Only roving bands of Cossacks could be in his way, and they could not even approach his aura of majesty; the zombies simply froze in place.  In short, so far as the Emperor was concerned, waiting for an escort to be formed was not worth the time wasted from his extremely busy schedule.

So it was that Mordred rode out this morning with little notice. The Emperor was accompanied only by Marshal Bethar, his General in Chief , and General Fanfaronnade, his Master of Scribes . It was all General de Herne could do call for an escort to be organized before riding on to catch up.

The Emperor must bring his scouting party to safety. This can be accomplished by exiting the west side of the table, or by simply defeating all of the ghouls in play.

Nobody really cares what happens to the escort except perhaps their wives, sweethearts, and mothers.

Emperor Mordred, mounted on a light horse. You can find full stats and rules for using Mordred in your games of Flintloque on Alternative Armies' official PDF insert here.

He commands a section consisting of:

Marshal Lous Bethar (p 25, Death in the Snow), mounted on a light horse.

General Fanforonnade,  a Raw Ferach Elf Regular, armed with a Ferach pistol and an exquisite sword, mounted on a light horse.

General de Herne, an Elite Experienced Ferach Elf Cavalry, armed with a Ferach pistol and an exquisite sword, mounted on a light horse.

4x Coltzen Garde Lanciers, all Elite Average Centaur Cavalry, one armed with a sword and the remainder with lances.

4x Lanciers Rouge, all Elite Average Ferach Elf Cavalry, one armed with sword and pistol, the remainder armed with lance and Ferach Elf Carbine, all mounted on light horses.

Khan commands a section of 15 + 1d6 Monghuls, each an Average Ghoul, armed as per the figure, mounted on a Zombie Pony.

The Monghuls are irregular fighters of the first order and each ghoul is “born” if one may use such a term for a fiend belched forth by the flames of Tartarus, to the horse.

Each Ghoul counts as type Cavalry when mounted and type Irregular when on foot.

This one is dead easy. Use any flat surface, 6 foot east to west by 4 feet north to south is ideal but a Flintloque standard 4x4 feet will also work. The terrain is flat and covered with light snow, which has no effect on play but looks nice. There is a road heading east to west right along the middle of the table, but as it has not effect on play , and is also snow covered, do not worry if you haven’t a scenic item available with which to represent it.

The Emperor, the Marshal, and the two Generals set up on the road on the west table edge.

The Centaurs set up on the east table edge on the road.

The Lanciers Rouge may enter along the road on the east table edge on the first turn of play.

The Monghuls set up anywhere along the north and south table edges as the controlling player sees fit.

This scenario or one like it holds a good deal of potential for variety. For example if your collection lacks Centaurs (and shame on you if it does :) ) simply use another cavalry type, more Lanciers Rouge or perhaps the spiffing new modular Dragoons.

Also consider adding skills, traits, and flaws to your liking. What if the Emperor’s escort was made up of a favorite section of your past games? Foot might find it hard to reach his Majesty but the firepower of a section of muskets should give the ghouls pause.

Perhaps you would prefer a larger or smaller game? Simply add, or remove, cavalry and ghouls in a 2:3 ratio.

Finally this scenario can be reset, for example, in the Cataluccian theatre. Here its Wheeling-Turn in peril and none other than Sergeant Sharke come to his rescue. That is after all how that worthy Orc became an officer… for those of you of a more literal literary mind, simply set the game in Inja, with Halfling, Othari, or simply savage Goblin cavalry as the attacking force.

This article was written exclusively for Orcs in the Webbe and was first published on the 12th December 2014 as part of it's 2014 Advent Calendar.