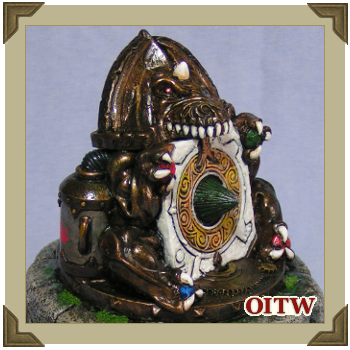 Miniature Converted, Painted, Based and Photographed by Tony Harwood

Rumours abound of a breakaway dwarf faction who have been scouring the lands for items imbued with and remaining Wylde Magicke. One such leadneeds investigating and Wheeling-Turn's spy-master Wogan has to send in a team to investigate.

Rumours of a break-away Dwarf Faction, one that was actively seeking out Wylde Magicke, had been permeating the ranks of our stout Red Coats for some time, but now Wogan had firsthand accounts of a new Dwarf weapon a weapon that used a Dracci Lodestone for its power. The snippets of information that Wogan had been able to glean talked of a huge Bronze Dragon that hummed and whistled before laying the whole battlefield to waste. Even with the exaggeration that Wogon had learnt to ignore, well, at least temper, these reports were very worrying.

At one of the now few strategy meetings that Olde Nosey held, the question of what to do about this threat was, in Wogan’s opinion just not taken seriously enough. He resolved to do something about it.

That something involved a dangerous and devious plan – the sort that Wogan was so proud of.

Far to the East on the out skirts of the snow-clad Diberian forest was a small Dwarf state called Lickedandstain, a small insignificant Princedom that had for some time managed to go unnoticed. Things were about to change.

The now bedridden Prince Ivan had allowed his oldest son far too much free reign and this dereliction was about to came back and bit him in the bottom.

The young Prince Jagger and his Consort, a rather pale and bejewelled Halfling called Hairry Matta had for the last three years been conducting raids into both the Diberian forests and the borderlands of the Star Wraith. These raids had originally been for sport and entertainment, but recently the finding of certain Wylde Magicke and sacred items had pushed the smitten Prince to further and further dangers. On one such occasion Prince Jagger, guided by Hairry Matta had found a huge Green-Black rock that hummed and glowed with immense power. The tusk was in fact one of the largest Dracci Lodestones ever known to have existed.

On returning to Lickedandstain Prince Jagger had retreated into one of the many dark and dank cellars below the Castle and started to experiment with the Lodestone.

He had summoned the visiting composer Ludwig Von Barkhoven to examine the artefact. Barkhoven was much too busy working on his latest composition to show any real interest, however he had suggested that if the harmonics could be amplified up to eleven then there was the possibility of a decent musical recital - a Rock Opera!

Dwarf engineers from all over the Principality were ordered to work on different ‘Amplifiers’ Some using Steam power and others captured Lightening Essence. One such experiment caused the whole of the South wind to rock and roll before the largest tower twisted the night away.

As time and experiment proceeded ‘others’ became interested in the Amplified Lodestone – Some called it an obsession, others a passing phase, but nobody could deny the grasp that The Lodestone had on Jerome, this was no Rolling Stone and Hairry Matta was happy to see things proceed.

On Jagger’s 60th Birthday a huge Bronze Dragon was wheeled into the central courtyard and on the stroke of Midnight as the power of the Dracci Lodestone was fully unleashed. The Dwarves in attendance that evening were said to Rock around the Clock before the true power of the amplified Lodestone was released. The courtyard was bathed in a noise and light show the sort of display that had never before been seen on Valon. Coloured lights and pyrotechnic displays were seen for hundreds of miles around. Drawing Lickedandstain to the unwanted attention of many interested parties.

The next morning Jagger, having had very little sleep helped to re-locate the Dragon to a stone pedestal at the front of the castle. Hairry Matta found some regeneration herbs, natural weed that allowed Jagger to continue for days with little food and less sleep until the Bronze Dragon was securely in place.

Almost exactly one week later the first ‘interested party’ to arrive was a delegation of Dwarves from the rival state of Beerstein. These unwanted party-pooper’s were the first to feel the full force of what has now been named Dracci Breath. It would have been appropriate to include a fuller report on what actually took place that day – but as no Beerstieners survived – there is little to record!

Next some Ostrian Poodles, who were promptly sent away with their tails between their legs. Then a larger Ferach force, who were also easily routed. In fact the only attack that had any effect was from The Star Wraiths Zombies, who actually enjoyed the deafening tunes, and were even seen to jive and jitterbug, that is before they were totally destroyed.

So there you have it a Weapon of Mass Destruction in the hands of a despotic Dwarf Prince who regularly dabbles with dubious herbs and has a consort who most level-headed ‘stunties’ would shun. What could possibly go wrong?

Back to our anti-hero our lovable rogue Foul Mouth Freddy, who at this precise moment was just enjoying the last dregs of a particularly fine Brandy before making himself comfortable for an afternoon siesta.

The inexperienced messenger, who had only just arrived in Al Garvey from Albion, in his fine new trews and jacket thinking that all days would be so wonderful was in for a very rude awakening. A very RUDE one.

He marched up to Freddy and saluted in that ‘toy soldier’ way that made him look like a carved doll. Sergeant Freddy T. I have an important message from Major Wogan.

I’m not sure if Freddy was asleep or just pretending not to hear, but when the ‘Green’ soldier was impertinent enough to kick Freddy on the sole of his boot, the tide of abuse was enough to physically force the Orc to stumble and fall on his backside. Right in to a pile of horse dung. The broken messenger eventually made his way back to camp, sniffling into his lace hanky.

Freddy re-read the written order from Wogan just before he entered the officers’ tent.

"I won't offer you anything to drink, as you have important things to prepare for. Here are your orders. You are to select a group of Red Coats and recover this piffling rock, then return here and make sure you report to me and NO ONE ELSE." said Wogan, without looking up. "You may go."

Freddy took the leather pouch and as he turned on his heels, managed to pinch a lone decanter of Oporto, that Wogan had inadvertently left unguarded.

The table should be set up as if approaching the gates of a fine (if a little run down town/castle). To the side of the gate should be the Bronze Statue or Dracci Breath. There should be a well worn road leading up to the gate and some additional terrain (enough to make the table look pretty). 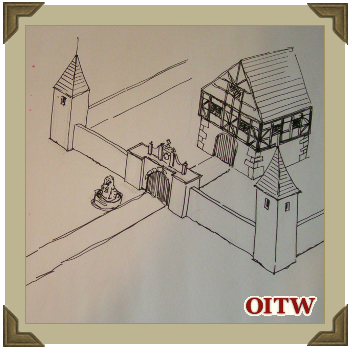 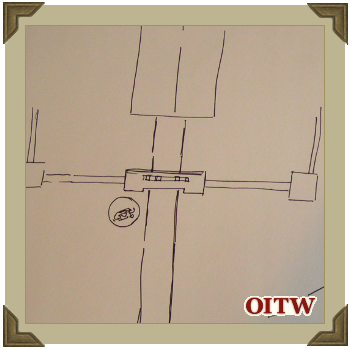 Freddy has timed his entrance to the board perfectly. Last night being the Autumnal Solstice was the night (actually Day, night and next day) of the broaching of the new Dwarf Ale barrels. And as is now becoming a little stereo typical all of the male dwarves were very much the worst for wear.

Freddy must recover the lodestone (a couple of barrels of ale would also be very welcome).

Jagger cannot allow the Dracci Breath (or any part of it) to be taken by anyone. He has become very much attached to it (in a soulful way). He also has a small force of very motivated Dwarf Guards to call on.

Hairry Matta has invested too much time (much too much time in both courting the imbecile Dwarf Prince and overseeing the building of this WMD) to allow it to fall into anyone else’s hands. Her allies, a group of less well mannered Dwarves will see to it that this does not happen.

Throw in one other random force and we have the making of a great if somewhat confusing game, just the sort that I like.

Below you can see images of the completed model  as well as some during construction. 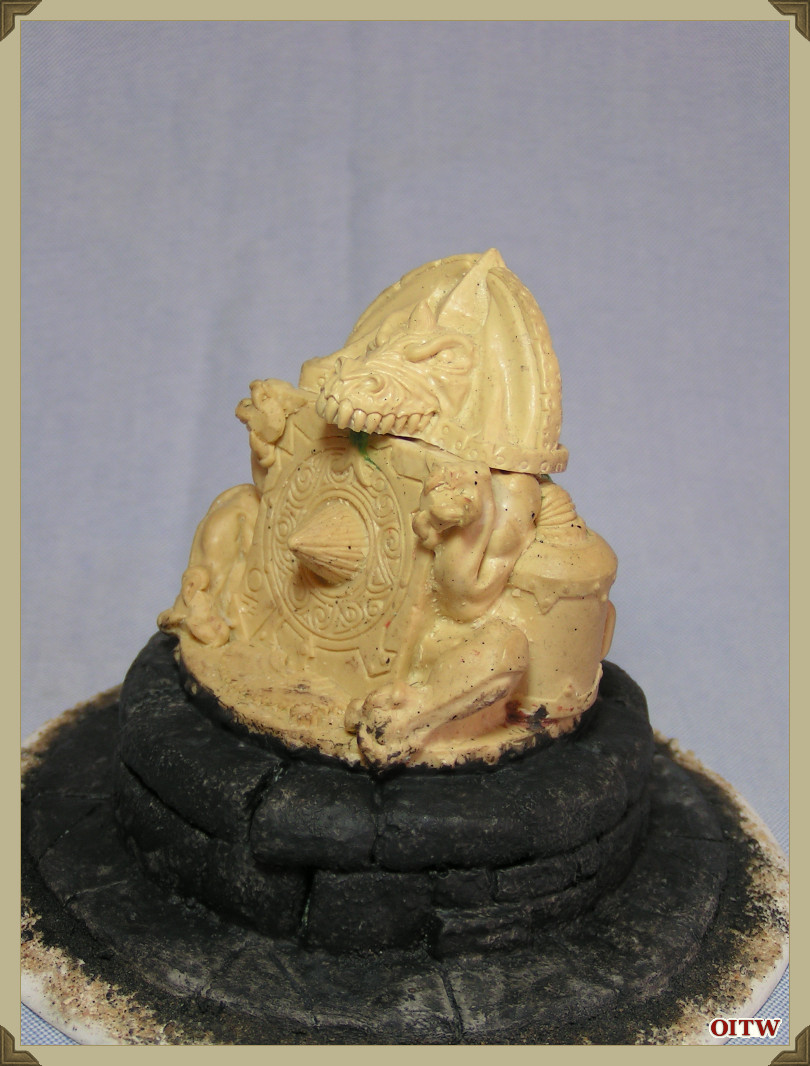 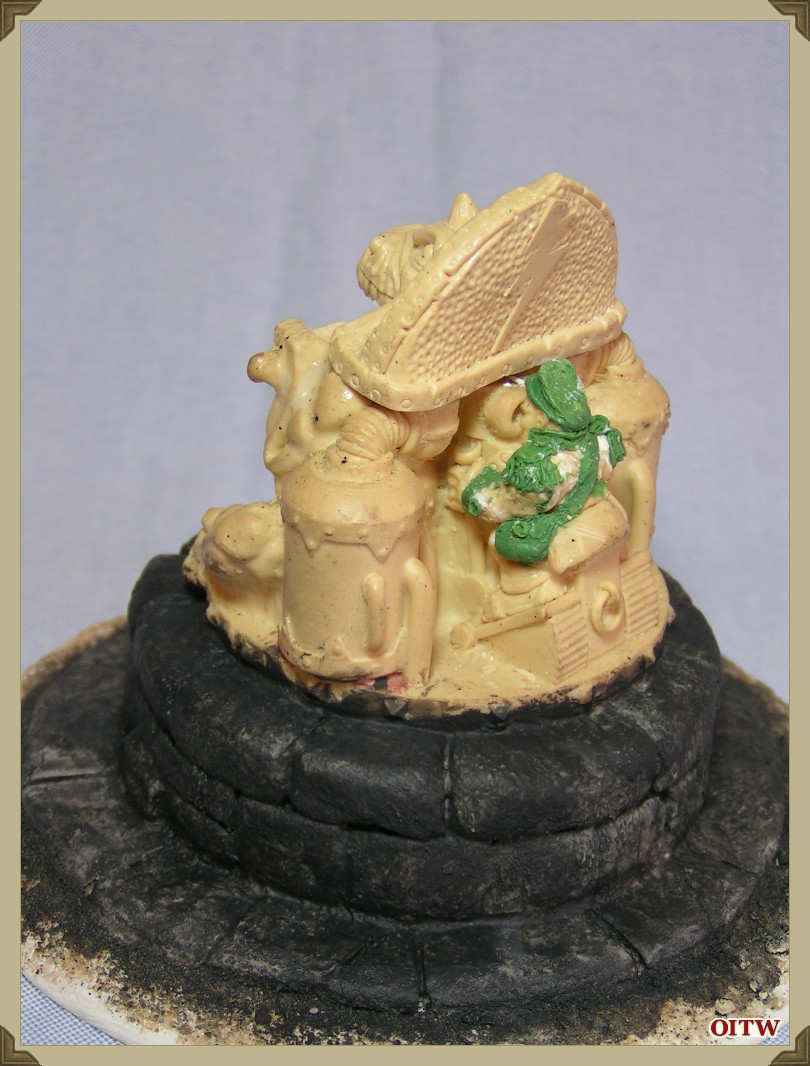 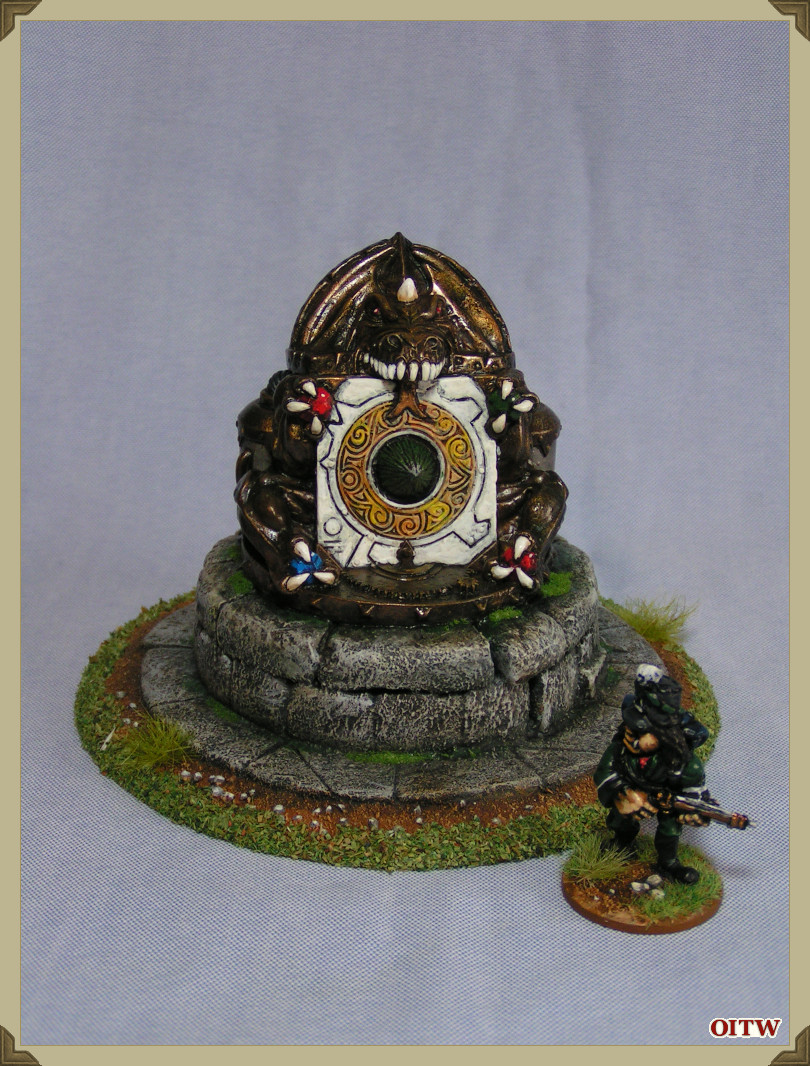 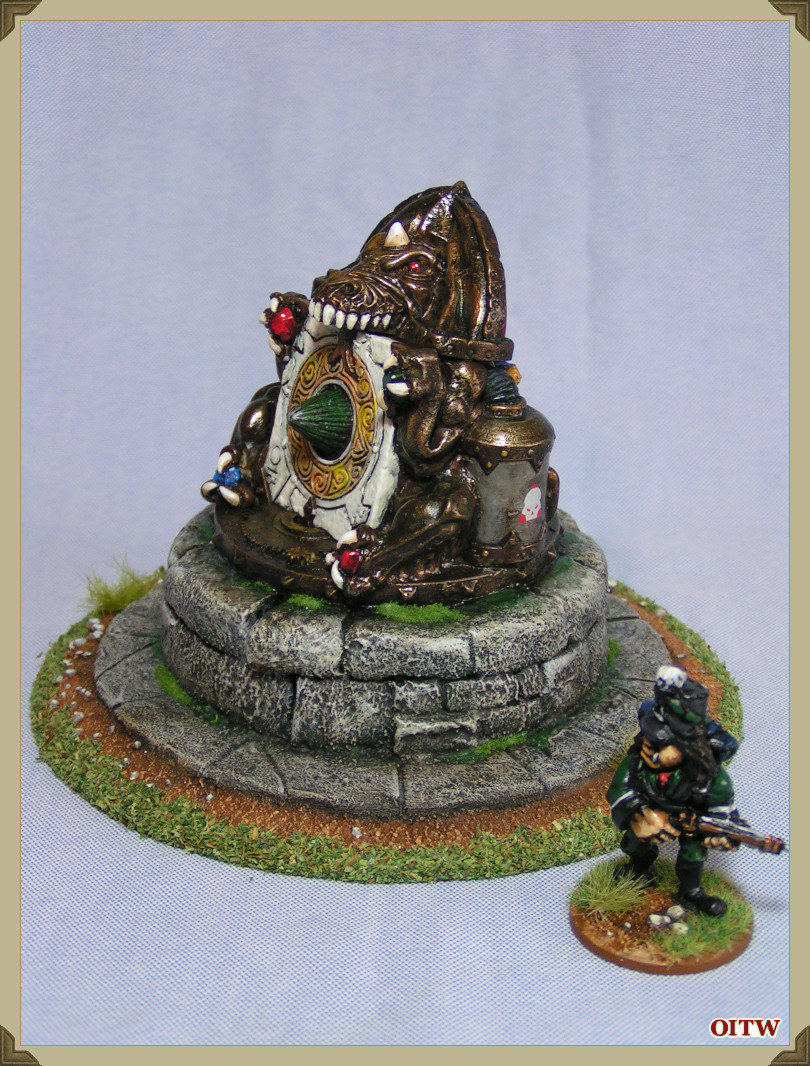 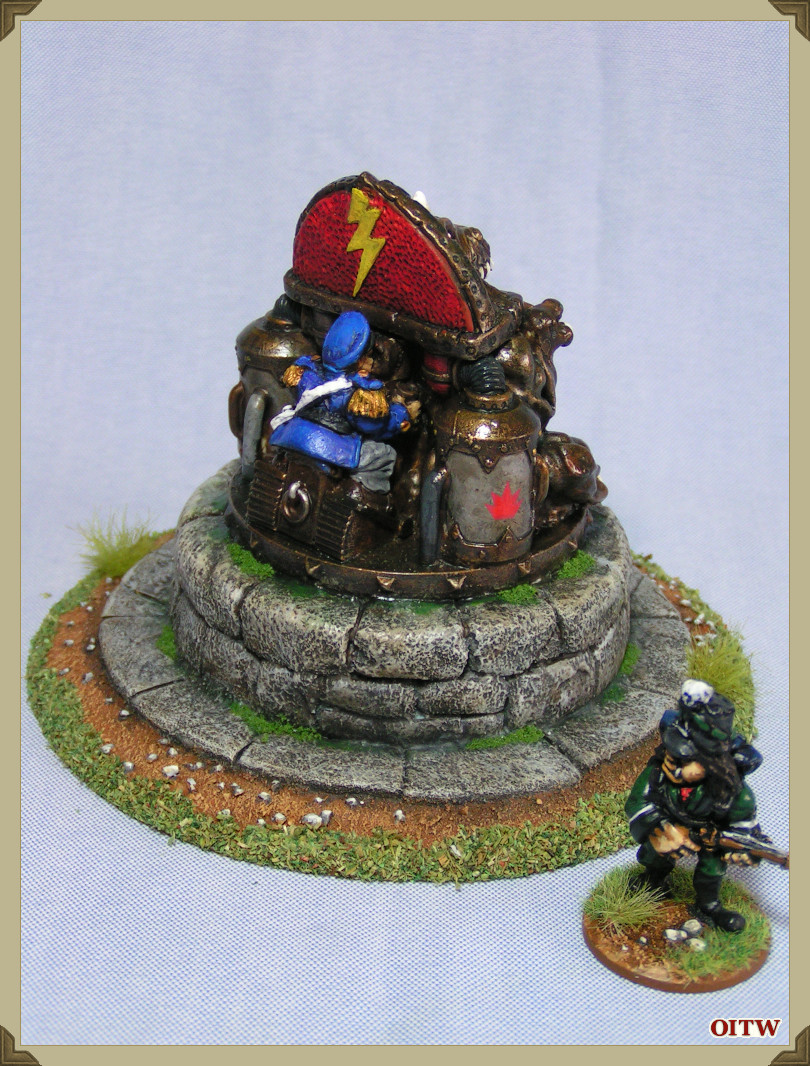 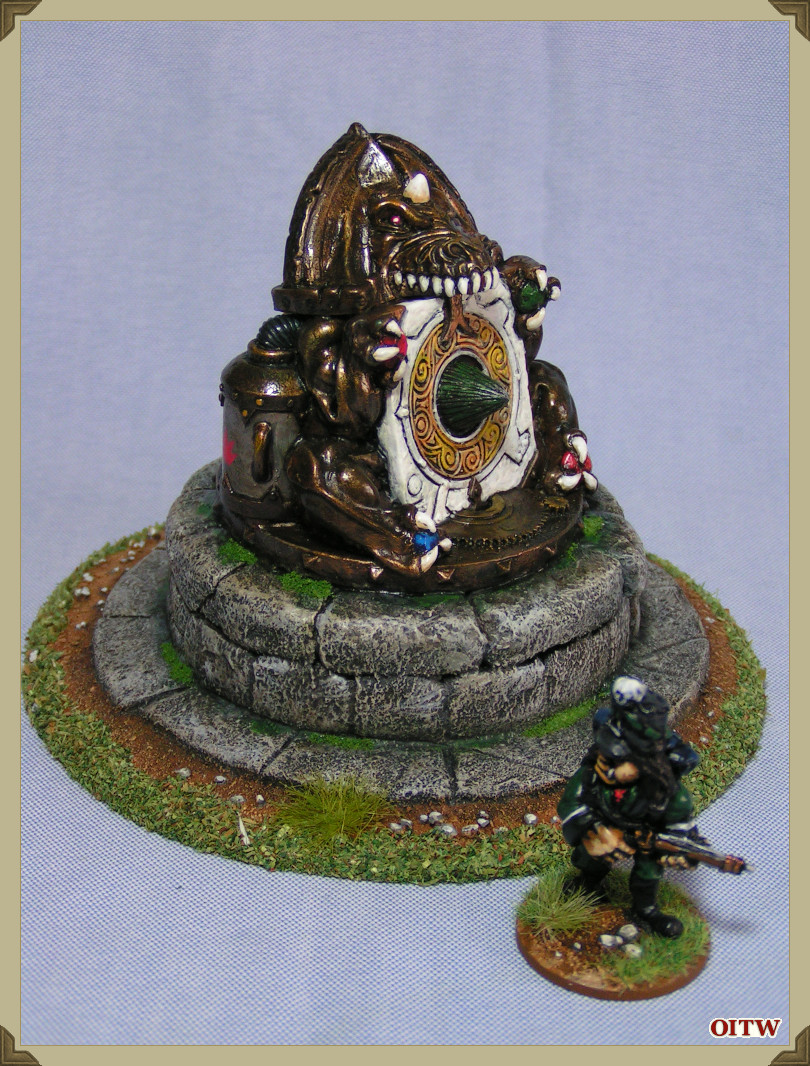 To see the complete adventures of Foul Mouth Freddy simply click on the  maroon tag  just below and to the left.