A Flintloque Scenario by Phil Sherlock 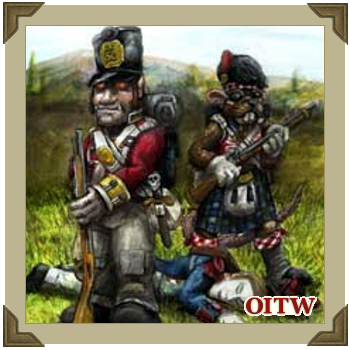 Follow the intrigue surrounding the coronation of the new King of Skandavia, the outcome of which could determine who the Trolkin and Trolka fight for in the Mordredian Wars, in this mini-campaign updated for Flintloque 3rd Edition.

The King of Skandavia, Karl IV, is dead, poisoned by his own Field Marshal. As Karl left no Heir, a new King must be chosen, but in line with tradition, he must be related by blood to the Royal House. The Ferach Elf Prince Bernadotte of Pontecarlo is chosen. He must travel to Trellheim to be crowned. Two of the Trellheim Palace Guard are chosen to escort him there. The way to Trellheim is long and arduous, and must so the Prince decides to go via Krolsberg, taking advantage of that city’s hospitality – probably the best in the world. However, a high placed individual in Krolsberg who is loyal to Albion gets word of this and plans an ambush. The Orcs send in Marines to aid the Trollka, "H'Ogre Danske"

The setting is on a lonely road to the harbour, a path in between sand dunes, with a ship waiting at the far table edge.

The Trolka have sworn an oath to get the Prince to Trellheim and gain a +1 bonus to both Steady and Discipline.

The Orc player should mark the starting positions of their characters on a sketch of the playing area. They do not place their miniatures until they are in line-of-sight, or take an action that would reveal their presence (i.e. firing, moving through LOS etc.)

The Prince and his surviving entourage escape on-board the ship but are forced away from their planned destination, Trellheim, by patrolling Albion Warships. After a relentless chase they find themselves shipwrecked on a barren shore. The party obtains directions and set off for Trellheim once more. At the same time, an advance patrol of the Undead, in the area to scout out Ferach positions in the far north, get the scent of Ferach and set off in pursuit.

The board is an open snowfield, with a small forest, and some peasant hovels.

The Trolka et al. deploy 1/3 of the way in. For the Trolka to be victorious at least the Prince must get off the far table edge. The Undead must stop/kill him to win.

The Trolka have any survivors from the original Scenario, plus up to two Trolkin Mercenaries hired after the shipwreck.

The Prince and Trolka battle their way through the Undead and arrive at last, 3 weeks later, at Trellheim, the Trolka capital.

They arrive just as a new King is being crowned!!!

The Orcs have found the Prince's younger brother. Now a landless and penniless noble; the Count of Pontecarlo, whom they have smuggled into court and passed off as the Prince. He is a perfect double, recruited with the aid of an anti-Mordred faction within Court. A battle ensues in the throne room; the Royal Guard are momentarily confused as to whom they have actually escorted! The Prince or the Count?

The "table" should be quite small, with only the throne and some fixtures as terrain. The Count is defended by his Ferach Retainers, plus his half Ferach/half Trolka bodyguard/cook - Choppe de Birdie

The Count of Pontecarlo, stats identical to the Prince

The winner takes the throne, and the survivors from the losing side are kept quiet

(And meet with accidents!)

Miniatures for This Scenario

As Flintloque stalwarts know both the Trolka and Trollkin are now fully supported by a range of fantastic miniatures from Alternative Armies along with an army book with complete background and rules for using them in both Flintloque and Slaughterloo.

Check the Alternative Armies website for both the miniatures and the free 17 page Trolkin/Trolka Army Book.

It was first published on Orcs in the Webbe on the 11th December 2008 as part of that year’s Advent Calendar.

It was absent for several years due to a prior regeneration of the website not transferring everything over correctly, the wrong has now been righted.

The version above has been slightly modified to make things fit in line with the Trolka Army booklet and Flintloque 3rd Edition. It was published on the 12th March 2015.