This is a two player adventure which may, as usual, be adapted for solo play.

Desert-Island Llewellyn, the head of Yew Branch, affectionately known as Blind Yew due to his failing eyesight, has been snatched from his stately home, whilst tending his rose garden (not a euphemism).  The delightful old gentlehob of Taffsea has locked in his brain the last secrets of his great work.  The only thing known by Brittorc Intelligence is that Blind Yew claimed that his revelation could end all wars…… He kept it secret, he kept it safe.  The Brittorc government wished to know what this great secret was and were sending ‘Top Men’(tm.) to extract this.

Blind Yew was a cynical old Hob, he wouldn’t tell his secret to just anyone.  His concession was that he would tell only Austin Powys of his secret and no one else.  Before further detail could be obtained the devious La Verre au Voir struck and with the aid of a self-inflating air balloon, the Elf made off with the Blind Inventor.

The balloon was traced to la Verre’s mountain hideaway, the Watchtower.  Naturally this would only have been a job for one Hob, Austin Powys.

The brains at Brittorc Intelligence have foreseen that Austin will need help on this occasion and they have seen fit to provide three other Double-O Gauge agents in order to assist.  They have been heavily made up to resemble Austin so that they may be indistinguishable and therefore act as decoys.  A number of approaches have been suggested from full frontal assault to sneaking in from the four separate corners.

It should be noted that each agent is of similar capability to Austin and they have had a whole series of adventures of their own, which will doubtless begin to feature in later advent calendars….

The Watchtower is aptly named and there is no way of approaching it without being seen.  To this end the Brittorcs have supplied Austin with three other Double-O Gauge agents to act as decoys in approaching the lair.

Luck is on Austin’s side as the Watchtower is poorly guarded and if the decoys are sufficiently clever then they may lead enough guards away for Austin to nip in and score the try and if there was time maybe a ‘mixed metaphor’ … his favourite drink.

Of course a map is needed but luckily the plucky author can rely upon the editor, he’s always got the blue prints for a mountain lair to hand.

As luck would have it I do indeed have a map to hand. I recommend using one of Heroic Maps excellent dungeon layouts, The Sepulchre of Last Vigil, to represent La Verre’s mountain hideaway. It is available to buy from Wargame Vault. It can be printed out or used in your favourite virtual tabletop software. 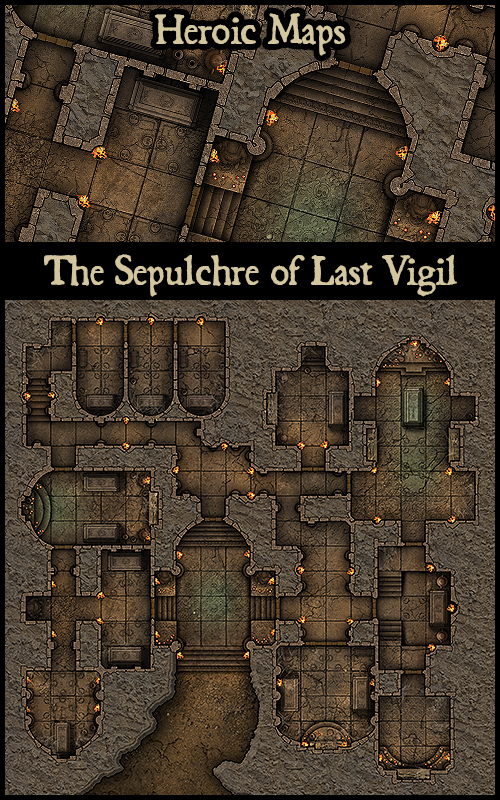 These agents are sufficiently bespectacled as to resemble Austin Powys, and they are equally as deadly… they are:

They would not fool Blind Yew they will sufficiently fool the guards, and even La Verre.

A Case of Mis-Identity

The Taffsea player should note which of the spies the real Austin Powys is, and keep this sealed or safely hidden.

Should Austin reach the captive head of Yew Branch then the identity must be revealed as the spy achieves his first objective – Obtaining the secret. (Minor Victory Achieved)

Should Austin Powys be captured and Blind Yew remains a captive then La Verre au Voire has secured a victory for the Ferach (Major Victory achieved) as the secrets will be extracted eventually.

Austin may rescue get to Blind Yew but die in the process of escaping; this being the case the Ferach have only a Minor Victory, but a victory nonetheless.

La Verre still has his self-inflating air balloon. This may be located in a hidden location on in the Watchtower.  Should this be found, either side may use this to affect a quick escape from the centre square of the Ferach Base, but please not that it takes D4 turns to inflate and then it may fly away.

As mentioned, the Watchtower is understaffed, there are only six relatively tough veterans available to aid La Verre.  The villain player must then carefully choose which of the spies to apprehend or divide their troops to the extent that they may be easily taken out by the crack spies.

Of course the Ferach player could just kill Blind Yew outright however that would prevent any chance of obtaining the secret.  Should the player dishonourably consider this before Austin makes contact with Blind Yew then the Ferach has rendered the whole kidnap and torture as pointless (awarding a very pyrrhic victory to the Brittorcs as the secrets have been kept from enemy hands).

The difficulty of this mission may be altered by varying the amount of minions available to La Verre, or even by supplying troops to the Double-O Guage agents.

Click on the Austin Powys tag below to see all of his adventures here on Orcs in the Webbe!