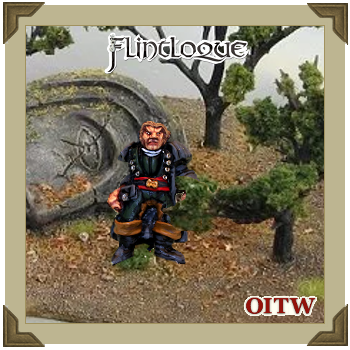 Carrying on from last years tale of the Fellowship of the Thing in Moria, having lost Giglamps to the Bal Rog, Captain Sharke's Fellowship is about to be broken in more ways than one.

You can read last years tale, "Sharke's Moria" right here on OITW by clicking on this link. Craig, Editor

It had been hard going since Major Giglamps have been lost storming the battery of Bal Rog. Literally lost, quite actually, a mad gobbo had charged the major and fell, grappling with him, down a seemingly bottomless crevasse.

Captain Sharke, the famed half-Elf Rifleorc, had assumed command of the expedition and made the, now “his”, company carry on. Out of the depths of Moria and into the unknown perils of Lothlurma. Dense jungle, Endless swamp. Mosquitoes. It had nearly led to disaster. It would have too had not the minions of Lady Galadaung, The Lady of Lothlurma, found Sharke’s party and led them, under guard, to the fabled city of Caras Galadnaanntaw. There, the White Goblin, as the Lady is also known, held audience with each member of the troupe. To each she gave advice, warning, and gift. Naturally she advised Sharke to repair to her bedchamber after the great feast, there, while giving him his gift, the Lady warned him that scouting parties from both Mordoristan and the rebel Governor-General of Isenpore had been seen prowling about the country between Lothlorma and Sharke’s destination, Gondorabad...

Sharke’s company set out from Lothlurma by boat, following the course of the Anduyani. At night they would set up camp on the riverbank, ever alert to possible danger. At daybreak they would once again take to the river after breakfast.

One such morning found them by Amon Kyaat, a local ruin, built long ago by an Empire long vanished from Valonian lore. It was here, while some members of the party were out looking for firewood, that the Fellowship, forged in Service and Honour, was broken.

Throughout their journey, the Thing had been relentlessly testing the companions. Relentlessly tempting them with visions of all they could achieve with its dire power. The Halflings, being creatures of little ambition, were incorruptible. Gallas and Himli, each unwilling, unable, to show weakness in front of the other, were steadfast in their purpose. Sharke who would spit on any trinket that would even dare to suggest that the half-Elf needed assistance from anyone or thing to fulfill his destiny, was beyond reach of the Thing’s temptation. In Harpy, poor conflicted Harpy, the Evil of the Thing took root.

How many times had Harpy called on Sentinel to save Guinalea? How many times had he plaintively called on the Saints to preserve his green and foetid homeland? “Have they ever heeded your call?” the Thing whispered seductively in Harpy's ear. “Together we can free your homeland. Together we can house the bairns and turn out the Land Lords…”. And in the end the lure of the Thing was too great.

Harpy isolated Sgt. Qatar in the wood and attempted to seize the Thing for himself. It was only with a great show of pluck and daring that Qatar managed to escape the ambush. The Madness of the Thing left Harpy just as quickly as it had overpowered him. “Oi! Wee Sarjeant Qatar! I’m so very soory. I do not know what came over me just then but I am back now. Please don’t be runnin’ off on my account. Sentinel save Guinalea! What am I to tell Mister Sharke?”...

For his part, Sergeant Qatar had finally reached a decision. For you see the Evil of the Thing had been at work on him as well, and as its Bearer, it was upon Qatar that the Thing weighed most. It had unceasingly hinted of Betrayal, Treason, and Plot. Harpy's assault had only proven the Thing’s point. If Sgt. Qatar stayed with the Fellowship, they would each try to take it from him, one by one. Even Dear Gamgee Din would have a go. “That just will NOT do!”, he thought.

Fortunately, Qatar had prepared ahead for just such an eventuality, helped in no small measure by Fate. You see back in Lothlurma, Qatar had managed to find a game of dice while the others were feasting, drinking, and whatever else. It was in this game that a besotted goblin had offered up a treasure map in settling a debt. Another treasure map! Now this expedition was starting to look tasty. The map portrayed a fairly indirect route through the fens and mountains surrounding Mordoristan. The largest part through an area marked “Shwan Say” (author’s note: Roughly translated it means “Die in the Mud”!). Well Qatar was always up for a bit of a walk about.

Just as Qatar headed back to the boats, scheming how to elude the rest of the party, shots rang out...

Sharke had done what years of instinct had told him to do; head for the high ground. From the top of Amon Kyaat he ascended to the roof of the Seeing Seat for recce. It took a while but eventually he spied the form of young Qatar, crossing a clearing in the distance. One mystery solved but where was that bloody Guinalean?

“Padrag, where are you, you great Bastard”, he muttered as he descended the stairs. “Perhaps Qatar knows? Best to join up with him anyways”.

No sooner had he exited the ruins than with a bang and snap a musket ball chipped the stone not a foot from his head.

“I’ll be buggered”, he said ducking back and, as he threw in the obligatory “Bastard”, cocked his Bakur Rifle.

The Fellowship of the Thing

Rekhardt Sharke (Section Leader): Official game stats for Sharke are available from Alternative Armies. However, to get you up and running if you do not have access to those stats just treat Sharke as a Legendary (if not Sharke than whom?) Elite Light Infantry Orc armed with an Exquisite Sword and a Bakur Rifle.

Harpy: As with Sharke, if you do not have the official stats handy, treat Harpy as a Veteran Elite Light Infantry Bog Orc armed with a Seven Barrel Volley Gun and a Knife.

Heinrich Himli: Experienced Light Infantry Dwarf armed with a Standard Blunderbuss and Exquisite Axe.Sergeant McChutney: Average Irregular Halfling armed with a Sword and Sawn Off Blunderbuss. McChutney is a strapping big boned brawler of a Halfling who is capable of wielding a cut down blunderbuss.

Sergeant Balifine: Average Irregular Halfling armed with a Sword.Points/Traits: Using Flintloque’s points system and the suggested stats for Sharke and Harpie this force comes to just a hair (or hare) over 270 points. Feel free to add traits, flaws, etc. up to 280 or so to reach that amount or even making up a Fellowship of your own.

Points/Traits: If both players agree the Isenpore player may make up a section worth roughly 350 points, with no Legendary/Veteran, only one Experienced, and any number of Average or Raw figures.

This game takes place on a 6’x4’ surface laid out rough as shown here: 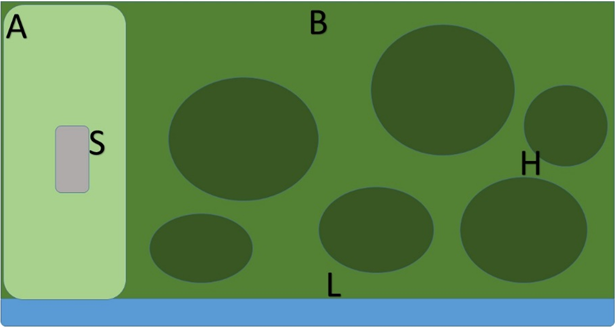 The left side of the map shows the hill on which sits Amon Kyaat. The river Anduiyani runs along the bottom table edge. The river is impassable to all but the Othari. The rest of the table is liberally strewn with clusters of light woods and clearings.

Sharke deploys at the S with his base in contact with Amon Kyaat.

Gallas and Himli deploy at the L with their bases touching the river.

Harpie, McChutney, and Balifine deploy at the H, each in base contact with one another.

Corporal Le Pew and the other six Othari Sepoys deploy at B, bases touching the top table edge.

The game continues until the Isenpore Scouts succeed in their objective or concede that they can no longer do so…or until all the murderous rebel scum has been dispatched by the Fellowship!

The Isenpore objective is to capture the two Halflings and carry them off any table edge, they may even be carried by Othari swimmers into the otherwise impassible Anuiyani.

If only one Halfling is captured and carried off the game is a draw.

Concerning the Capture of Halflings:

The Governor-General has made it quite, explicitly, clear that any Halflings the Scouts encounter are to be brought back to Isenpore more alive than dead. As such woe be it to any NCO or Sepoy who dare fire at McChutney or Balifine.

Halflings may be captured by successfully inflicting a wound on a Halfling in melee only.

A figure carrying a Halfling may not fire or reload a weapon and suffers a one column shift left to its chosen movement rate.

If engaged in melee, the figure must drop the Halfling until it can once again fulfil the condition for picking it up.

This isn’t so much a special rule as a simple note to assure you, Dear Reader, that neither Sgt. Qatar, nor Gamgee Din, have been forgotten. Concurrent with this skirmish, Qatar is making his way stealthily to camp (off table), seizing a boat, and crossing the river en route to Shwan Say. As you may well imagine plucky little Gamgee Din is no fool and has anticipated is friend and superior’s intentions. Qatar found Gamgee Din waiting in the boat with a full load of candy floss ready for travel...

This article was written exclusively for Orcs in the Webbe and was first published on the 18th December 2016 as part of it's 2016 Advent Calendar.