And Death Shall Have No Dominoes

"And Death Shall Have No Dominoes" 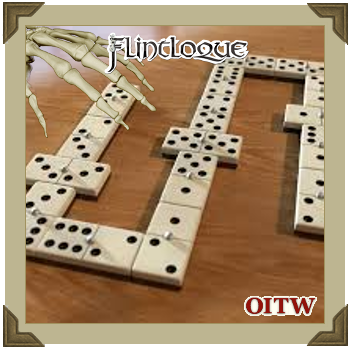 The old man was in his cups again and the young drinkers at the bat would point and laugh quietly.  No one mocked openly, as there was some respect left for the medals attached to his waistcoat.  Like his eyes there was still a faint glimmer behind the age encrusted grime.

At times the ancient soldier would raise his tankard and say the name ‘Rosie’ clear and with high voice.  This was the signal for the batman to provide more ale, which wasn’t so much as on the house as on the now forgotten slate.

‘When you’ve had enough, let me know.’

The landlord finished pouring, and looked for a second at his most regular of the regulars.

Peering through his dusty lenses the veteran asked,

Taken aback by the out of character use of these words, or even any words, the landlord found his own voice…

“I meant when you’ve had enough, I can get the lads to take you back to your lodgings.   I meant no disrespect, sir.”

A crinkly smile revealed uneven teeth, and then a light ‘harrumph’ was uttered.

With a shallow bow the landlord backed away away from the drinker, paying no heed to the figure now seated opposite, then returned to the bar.

The figure now opposite the ageing soldier was in a dark uniform, grey at its lightest, with back frogging over a dusty pair of bony shoulders.  A light brown box, long and narrow, is held in his right hand, while left slides back a barely visible lid.  Inside are a set of dominoes carved from bone.  The soldier knows the colour of bone, but recognises the smell of his companion, from many previous meetings.

“I know what happens now, I play; you win, and we leave together.  But I’ve a mind to stay a while and drink more.  There is a king’s ransom in credit at the bar, and you know which king.  I’m not leaving any time soon, least of all with you.”

A black glove moves away from the box and places a shilling on the table, then slides it forward, through the spilled ale.

“…And I know which king owns that shilling.  He and I will have words, in time, but not yet, not by a long chalk.”

Both companions match the posture of the other. When the old man sits back in his chair, so too does the grey ‘recruitment officer’.  Each can wait and both intend too.

“Do you remember when we met that time over the chimneys of Utrecht?  You said there that I could live more than once, but that even I had a limit,’

The dark shako opposite nodded, lengthening then diminishing the ever present shadow over the table. There was an almost perceptible chuckle as it did so.

“I believe that even you can be wrong, old friend.”

There was a shrug from those shin shoulders opposite.

“I do not hear you speak now, but you never did say much. If a man has nothing to say, he should remain silent and so often the evil did talk.  Too much they talked. I’ve stopped many a madman because he couldn’t just do the job. Always he would speak and delay. It is true; they all want to be caught in the end.”

There was a perceptible slant to the nod received this time, possible an indication of some cynicism.

The silence resumed once more. Peace reigns in the bar.

The night draws in, slow black, crow black, darkness settles outside and the bar dims.

The barman given the urging turns up the gas in the lamps and the night is simply evening once more.

Then by the eleventh hour of the clocks there is a sudden report of a door slam, a rampage of boots, fists and torn up cobbles as the saloon bar door bursts inwards.

The gang of villains now in the centre of the room are swarthy, in torn uniform, the uniforms are of many nations, and the interlopers are howling drunk.

With a fix on the old man, who now sits alone, the leader of the vagabonds declares, with a glint his lonely eye,

“I’ll have you, hero.  We’ve heard the songs of you, from Londinium to Taffsea.  I’m going to be the one that ends the music...”

The barroom drinkers stand up as one...

There is a creek, and a turn, a table is slid back.

An old man rises; he pulls the ruffs out of his battered sleeve, then uses the left ruff to clean his glasses with his right hand.  He looks to his ghostly companion and with a gravelly voice he utters two words,

"And Death Shall Have No Domninoes"

In tonight’s episode we have a good old fashioned bar room brawl between  a bunch of drunken mercenaries and the regulars of the Sailor’s Arms in Tarrwen Harbour.  The mercenaries are keen to make their reputations by killing the now retired Austyn Powys. But the lads are of Taffsea are not having their national hero ‘roughed up’, least not by a foreigner.

Christmas is not a time for rigid stats, its a time for gaming with friends and family. Set up whatever terrain you have with the characters you've always wanted to see 'settle an argument' and enjoy. There is, of course, a special rule below...

There are twists however as Death himself is present.  Death may, or may not, be here for Austyn, but he is definitely here for someone and he will roam randomly across the board using the classic D12 clock face and D6 movement rules.  When he comes into contact with a player in combat, then that player takes an automatic wound from their opponent.  It is the model nearest to Death, or even death, which takes the wound if there is any argument over who is nearest physically.

For the purposes of this fight Death is visible in his grim shako and black frogged uniform, so the players may seek to manoeuvre themselves around their opponents to avoid his grim feel.

Click on the Austin Powys tag below to see all of his adventures here on Orcs in the Webbe!