A Flintloque/Chess Crossover by Michael White 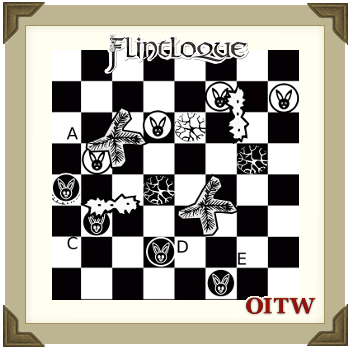 Michael White returns to OITW with something rather lovely, a Flintloque/Chess crossover featuring the rabbits of Burrovia...

Many years ago, they say there was a distant island inhabited only by rabbits.

There were the big rabbits on the west side of the island, and on the eastern shore, the smaller and more timid bunnies. The bunnies were good at growing vegetables such as carrots, cabbages, and radishes.

Whereas the big rabbits were mainly just good at bullying the bunnies and taking the food the bunnies had worked so hard to grow.

This arrangement worked to the big rabbits’ liking because it was very easy and only required what came naturally to them, which is being bigger than the bunnies.

One day, a mysterious thing appeared on the shores of the little bunnies’ homeland. You and I would have recognized it immediately as a sailing ship, but the bunnies had never seen such a thing, and so had no word for it whatever. It was very large and sat in the sand like a big rock, but in its side was a large hole, so the bunnies knew that it was hollow like a cave.

One of the braver sorts, a bunny by the name of Butterpine, decided to go into cave (the hole in the ship) and found some rather strange things that changed their Rabbit Island forever...

Slaughtership Down is a simple two-player board game for younger players which uses Alternative Armies miniatures, a standard chessboard, regular six-sided dice, and a small selection of easily fabricated terrain pieces. The game represents the struggle for dominance on Rabbit Island between the big rabbits and small bunnies. The game, though it represents a conflict with arms, is not terribly violent as characters are not ‘killed’ during the course of the game. They merely become knocked down or too scared to fight anymore after experiencing one too many close calls with a musket ball.

The players will need 4 miniatures each. You will need miniatures to represent the big rabbits (58505 Burrovian Line) and the small bunnies (58506 Burrovian Jagers or 58509 Von Hopp Chassuers.)

You’ll find it pleasing to paint these miniatures so that they’re easily distinguished from one another.

Feel free to give your rabbits names and personalities. Of course, make sure the big rabbits have different colored uniforms from the small bunnies.

For ease you can just paint the miniatures all one color such as Red for the Rabbits and Blue for the Bunnies. If you’re feeling a little more confident, you can even try painting the fur and the muskets brown and the hats black. Basic water-based craft paints should work fine for such simple paint schemes. Be sure to wash and ‘prime’ the model with white or black paint first. Protect your work by using a sealer such Mod Podge once the paint is completely dry.

There are many resources online that can provide advice on miniature painting. Advanced techniques will have you painting things such as eyes, buckles, and even unique fur patterns in no time!

Everyone probably has a chess board in the house. If not, you can easily draw one on a large sheet of paper or poster board. You could even draw it with chalk outside on the pavement. It just needs to look something like this:

An 8 X 8 square grid with each square being at least 1 inch across. The colors don’t matter so long as everyone can tell where the spaces are. 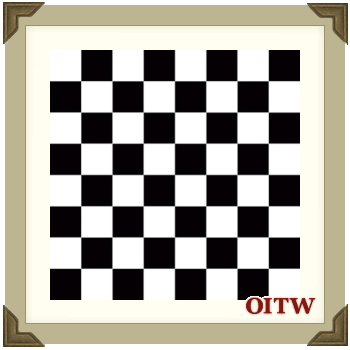 The dice are used to work out when a rabbit fires his musket or when he tries to rabbit kick an enemy rabbit (or bunny) out of a square. You can find these dice at most stores and in many board games.

You only need one, but it can be helpful to have two so each player has his own.

There are three types of terrain pieces for the game: trees, hedges, and brambles.

You can easily create all three of these with commonly-found scouring pad or construction paper.

Trees can be create by cutting 2 triangles out of scouring pad or paper and slotting them together in a Christmas Tree shape. Make sure the tree is no larger than two squares on your chess board. You should make 2 trees.

Hedges can be made by cutting a out a 1” high and two-square wide strip rectangle. You will need to mount it to a craft or ice-cream stick or a piece of card. Make two hedges.

Brambles can be made by cutting a square equal in size to one of the squares of your chessboard. You might want to put a little brown paint on them if using scouring pad or use brown paper. Make 4 brambles.

a) Place the chessboard between the two players on a flat surface.

d) Choose a rabbit type. The players decide between themselves whether they will play big rabbits or small bunnies. If you can not agree, then just flip a coin or roll a dice with the highest choosing which player will play which rabbits.

e) Alternate placing ONE rabbit directly in a space in the row CLOSEST TO THE PLAYER until all eight rabbits are placed.

An example setup with trees, hedges, brambles, and rabbits: 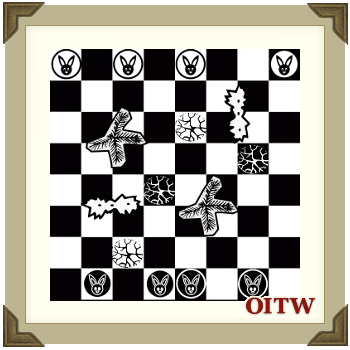 a) Determine who takes his or her turn first by each player rolling a die. The highest goes first.

b) Players take turns doing ONE thing with three of their four rabbits.

c) On their respective turns, a player may do one of the following actions with each of the three rabbits:

1. Move the rabbit
2. Shoot at another rabbit
3. Rabbit Kick an adjacent rabbit
4. Stand up from being knocked down

Shoot at Another Rabbit – rabbits may fire their musket at another rabbit that is in straight line horizontally, vertically, or diagonally and no more than 5 spaces away.

To shoot, pick a target that is in a straight line from the firing rabbit and roll one dice. Count down from the number showing on the dice, the number of spaces from the shooting rabbit to the target rabbit. If there are any pips left on the dice after subtracting the distance, this is the number of luck points the target rabbit loses. Each rabbit starts with 7 luck points. Once a rabbit’s luck reaches zero, the musket puts a hole in his hat, frightening the rabbit and making him run away. Remove a rabbit with zero luck from the board. You can just use a piece of scrap paper to keep track of luck.

Trees get in the way of musket balls. A rabbit in one of the 4 tree squares may avoid any luck loss from being shot at. Roll a dice. If a 4, 5, or 6 is the result, the rabbit doesn’t lose any luck at all.

Hedges obscure the target. The line between spaces separated by a hedge counts as one extra space of distance.

Small Bunnies discovered the muskets first and so are generally better shots. Bunnies may always rerolls 1’s. However, if they roll ANOTHER ONE on the re-roll, the lose 1 luck.

In the situation below, the shooting rabbit A has rolled a 4. He can not have chosen rabbit B as the target because that rabbit is in a bramble space. Likewise, Rabbit D does not lie within a straight line.

He could have chosen rabbit E, but his roll of 4 would have caused no luck to be lost since the distance is equal to the number of pips on the die. 4 – 4 = 0.

If he was fortunate enough to have done so, rabbit C is the best target. The distance is two spaces, and there is a hedge in between counting as one extra space. This would cause the target to lose 1 luck. 4 – 3 = 1 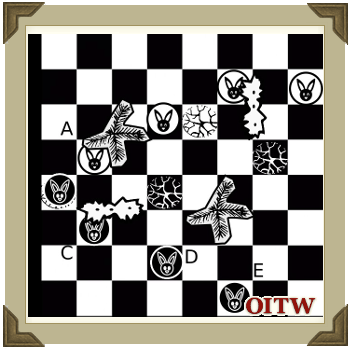 Rabbit Kick – a rabbit my ‘rabbit kick’ another rabbit that is adjacent to it. To do so, each player rolls a die. If the player initiated the kick rolls higher, the target rabbit is pushed directly away one square from the kicking rabbit.

Big Rabbits always count as rolling higher if the dice are tied.

A rabbit that is pushed away across a hedge is also ‘knocked down.’

Example: Rabbit A kicks Rabbit B. Rabbit A rolls a 4, and rabbit B rolls a 2. Since rabbit A rolled higher, Rabbit B gets pushed back directly away into space C. 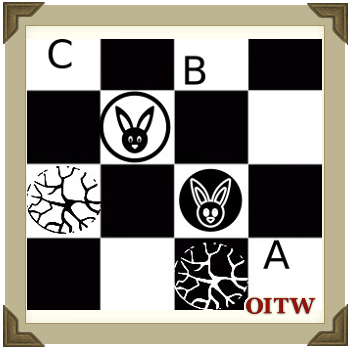 Stand Up – A rabbit that is knocked down on the board my be stood back up as its action.

The game ends after 10 turns.

The winner is the player who has the most of his rabbits on his opponents side of the board.

Has the most combined remaining luck if the above two conditions are equal for both players.

Try changing the victory conditions for more variety. For instance, what if one side has to protect a field of carrots by having a rabbit occupy a specified space on the board by game’s end?

Add new terrain features. Rocks could block shooting completely or roads could allow rabbits to move two spaces with one action instead one space.

The above rules supplement is an Orcs in the Webbe original and was first published on December 23rd 2018 as part of its 2018 Advent Calendar.

You can order Flintloque from Alternative Armies by clicking here or on the big AA graphic below. Once there click on the little magnifying glass icon in the top right to use thier excellent search feature to find the products you want.