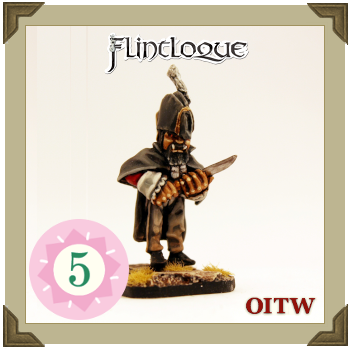 A small game in its own right using Flintloque rules or as part of a scenario for Flintloque we present 'Blayderunner'.

Can your officers spot the Repents and retire them or will they be retired instead?

Holdorc was dead.  That much was certain.  His uniform was torn and bloodied in an apparently frenzied attack.  The once carefully kept bundled papers and ink pots were strewn all over the gore soaked grass within the canvas tent.  In the corner the odd contraption given to each of the Orcs tasked with seeking out those who had fled from Eldto Tyrorc was smashed almost beyond recognition.  Without conscious through Rekhard Dekorc touched the contraption that was on a thick strap about his body. Dekorc's contraption was intact and though he knew how to operate the Vorg-Kramp machine its workings were a mystery to him.  Almost as much as his reason for being here...

Three officers of the 4th Dragoons had been ordered to report to an alchemist in the employ of the Al-Garvey Regency.  This had turned out to be Eldto Tyrorc who worked in a high stone tower surrounded by masses of Goblin labourers who were making charcoal which resulted in the whole tower being wreathed in smoke and soot.  Indeed the entrance was only visible due to the burning torches either side of the door.  Tyrorc had greeted them rather coldly and had explained that some of his 'experiments' had managed to escape; the evidence being the wreaked manacles on the walls.  He said that the experiments were valuable and must not fall into the hands of the Elves.  That they looked like real people like real Dwarves, Goblins and Orcs but that they were imbued with Wylde Magicke and this had given them life where it should not have been.  Tyorc had introduced Captain's Dekorc, Holdorc and Guff to his assistant a beautiful Orcess named Ravashel who had given each of them a heavy contraption called a Vorg-Kramp.  The alchemist had explained how to operate the machine though Deckorc had more than a little  of his attention on Ravashell.

After being instructed and given their exotic equipment all three officers had been told to collect their pistols and also a sword as sharp as possible.  They were told they were now 'Bladerunners' and their mission was to locate all of the experiments who had escaped the tower and to make them repent.  These Repents, they did not know how many there were or what they looked like, would not come quietly and Tyrorc had said it was likely they would fight to the death rather then be taken into custody.

That had been a week ago and while Captain Guff had headed south toward the village of Priss it had been decided that the larger town of Lob Angles would be searched by Dekorc and Holdorc.  They had split up and the two officers had found a company of the 50th Foot along with Al-Garvey Militia encamped around the adobe hovels.  Dekorc had reported to Major Bryntorc who had told him that several bodies had been found horribly injured but no suspects had been located though rumour had it that who ever had done it had to be quite batty.  Returning to the camp Dekorc had found Holdorc murdered.

This would make the task all the more difficult now he was on his own.  There was a voice behind Deckorc at the mouth of the large tent.

“You know I've seen things you would not believe.  Fire Ships off the coast of Al-Garvey, artillery sparking in the dark.”

Deckorc put his hand to the butt of the big Albion Horse Pistol at his waist.  The contraption around his body began to whistle.

“All these moments will be lost as tears in Valon's reign.”

As the pistol cleared its holster there was a rasp of steel as a blade was run out of a scabbard.

Welcome to Blayderunner a small game which you can set within a normal Flintloque scenario or on its own. It is set in Catalucia in the midst of the Army of Albion but it could equally be used in Central Urop or elsewhere on Valon..even with regular Humans..shudder! To make use of this special little game you will need a standard deck of 52 playing cards along with your normal Flintloque miniatures and terrain plus dice for a regular game. I do recommend that you place this small game within a larger setted scenario for maximum fun but it is not vital. Have a couple of miniature chosen to act as your seeking agents of Tyrorc.

Set up your playing area, if playing this outside of a normal scenario, as a two foot square and place any terrain you choose though it should all be dry land if possible.  The aim of the game is to discover the 'Repents' who are hiding among regular characters.  Once you find them it will be a sharp fight to see if you as Dekorc prevail and manage to 'retire' these strange creations of Tyrorc.  Use normal Flintloque rules with every character who is not a Blayderunner being given one face down card from a shuffled deck of cards.  There should be 50% or so of the miniatures getting a card.  Place the rest of the deck to the side for the moment.  Play then commences as normal within a scenario with its own aims or if you playing the small game only have the characters moves at their regular walking rate around the playing area turning and moving on once they reach an edge.

No matter what the scenario the aim of the Blayderunner is to find the Repents and to remove them from play.  This can be a challenge during a hot action of musketry with the enemy!  Regardless of the normal structure of the turn any character who is a Blayderunner activates first and can commit normal actions such as reloading but his task is actually to move to within 15cm of a card carrying figure and once there he lifts the top card from the deck and turns over the card possessed by the figure.  This takes one action. A match is defined as the same NUMBER on the card regardless of suite with King, Queen, Joker and Ace all counting as numbers. If they do not match in number then the Vorg-Kramp contraption has performed its task and that figure is a regular mortal after all.  However if the cards match in number...that figure is a Repent!

The Vorg-Kramp contraption emits a whistle and at its sound the now revealed card carrying figure will do its best to attack the Blayderunner with any weapon it possesses or its bare hands!  Turn sequence is as normal and the Repent possesses the same movement, melee, steady and such statistics as its regular counterpart with the exception of a +2 added to Melee Modifier and +1 Wounds.  It will not take a Steady Check for any reason and will not stop in trying to kill the Blayderunner.

While it is possible for the Blayderunner Orc to continue to use his contraption while combating a Repent it is not advised unless your Orc is a Veteran or Legendary character. Combat continues with the Repent until it is destroyed or the Blayderunner falls.  The process is then repeated until the scenario ends with victory conditions or all card holding characters are investigated.  Each time a card is taken from the top of the deck.

But there is a complication...

If a Repent is revealed then any card carrying figure the Repent passes within 8cm of as it attacks the Blayderunner must also turn over its card and if it matches the current drawn card's number from the deck..well you know what that means!  That figure now joins the fray and attacks the holder of the Vorg Kramp contraption.  It is also a Repent!

It is recommended that you have one Blayderunner for every five card's handed out to miniatures in the playing area at game's start.  Pistols and a Sword are a good array of weapons for an Orc tasked with this job but feel free to load up further if for instance it is section of Rifleorcs you are testing out rather than say some Dwarf Civilians!

This small game can be played on it its own and indeed was tested out this way.  The random nature of the shuffled cards and then the random match of the numbers added to this means that you can go through play with very different results each time.  During play testing we had an instance of no Repents at all once and the other two times we had a couple and then more than fifty percent match!  That was a tough game indeed.

We tried out the rules within the recent 'A Rod Longer than Yours' full Flintloque scenario with two Orcish Blayderunners put in with the Goblins of the 18th Foot.  A section of twenty with ten cards placed out.  As play progressed the Goblins were checked while under fire and three of them were Repents!  All three were taken down and it made for a great addition to the scenario.  We had a third player controlling the Orcs for this.  We used the 54013 Dismounted Dragoons for this task.

I hope you enjoy this little bonus.  I had fun thinking it up and trying it out.

It is always a pleasure to be asked to contribute to the OITW advent each year. I tend to try and offer a couple of pieces and while I had an idea already (see my other entry for this) I did want to mark 2019 as the annum that one of my favourite films of all time ceased to be 'in the future' and was 'now' instead. If you have not seen Ridley Scott's masterpiece Bladerunner then I envy you as I have it almost memorised from many VHS viewings as a teen. Also the sad loss of Rutger Hauer who delivered one of the finest science fiction monologues ever.