A group of Finklestein Dwarves have been tasked with subuing the KGB Liche Stalinov, will they survive the encounter? 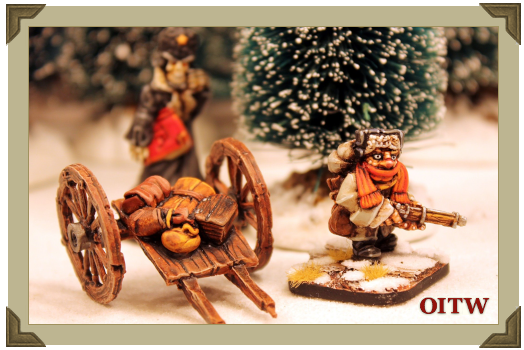 Flitting between the trees the Liche continued to evade its pursuers no matter how quickly they chased it. It was their prize. A chance to deal a blow to the Dark Czar who had sprung a devastating trap upon the Emperor Mordred and the Grande Armee du Norde sending half a million troops into a meat grinder of a retreat. They knew this Liche was important. That it was different. It had been seen giving orders to the Vampyre nobles who led the dead legions and Vampyres were normally a rule unto themselves. Two hundred lives had been lost and now this small band had chased the Liche into the trees. They would have it or perish in the attempt.

This tiny adventure is for one player and you will need a Stalinov miniature plus some Zombies and a section of ten Ferach Troops such as Finklestein Dwarves as I used or Elves if you prefer. Create their profiles in the usual way but do not include any unique characters. Set up a one square foot playing area which is lightly dusted in snow and has groups of dead trees each of three trees which should be spaced equally apart on this playing area making it a fairly dense forest. The Witchlands are a frozen hell of a place after all. You will also need your usual Death in the Snow game book and a deck of typical playing cards too. Shuffle the deck of cards and put it next to the game board. Place your mortal characters at any edge of the playing area and then begin to seek Stalinov... 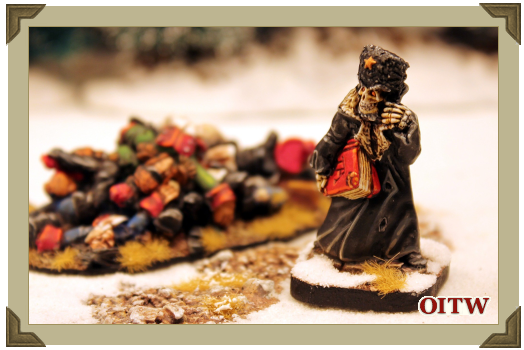 The goal is to live long enough to discover Stalinov and to subdue the Liche and thus win. This little adventure plays differently each time making it very 're-playable'. You take control of the mortal troops in play and when the first turn begins proceed as follows. Move your troops towards the centre of the playing area and when within 10cm of it draw one card from the top of the deck. Consult it to see what comes out of the trees towards you.

The suite of the card has no bearing but the keep the card as it is worth something to you. Place the discovered miniatures in the playing area next to each other and 10cm from the nearest of your characters. The turn then proceeds as normal. You may not proceed until all of your foes are vanquished. Once the playing area is yours move on searching in the forest. Take your remaining characters back to an edge of the playing area and continue on as if you are in a new part of the frozen forest. Make the next card draw as before.

Once you have six cards upon drawing the seventh you automatically find Stalinov next. Depending on your encounters you may find him earlier. Total up the value of your held cards as you go (numbered as they are and face cards including Aces worth 10 each) and if you reach 45 then the next card you draw is automatically Stalinov (as opposed to it being the seventh card automatically). Once the search is over and you find the Liche you must capture it.

Stalinov is treated as a standard Liche in this adventure though you may upgrade him if you feel it is correct to. Reduce his wounds to zero to 'knock him out' and if you manage this then you have won!

Ropes would not serve but the chains which used to pull a nine pounder cannon on its trails did so in their stead. The Liche was wrapped in them. Its black robes were pushed in by the weight of iron but still it struggled. A leering skull face under a fur bearskin. None of them could meet its empty socket gaze no matter how their tried. How to question it? How to gain knowledge from it? Someone in the retreating columns would know. Four of them lifted the Liche over the back of a protesting pony and they made best speed back towards their fellows. 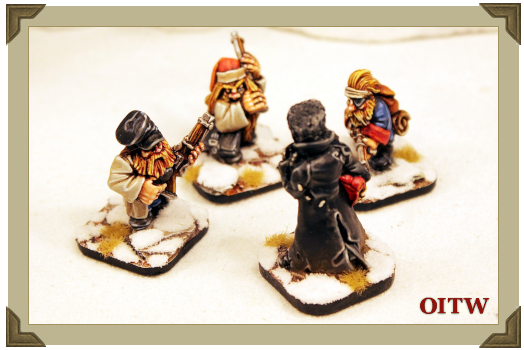 I hope you enjoy this little adventure. It was an effort to write it and test it if I am honest. I suffered an injury which made and still makes typing and lifting with my right arm rather painful but hey such is life. I always enjoy contributing to Orcs in the Webbe. Miniatures used were 5002I, 52505, 55010 and 55014. Game rules from 5026 Death in the Snow. Thanks for your time as always.