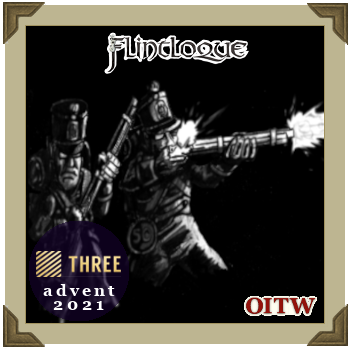 In the first part of the 'Sharke's Assaying' arc can Captain Sharke and the Rifleorcs sneak up on the Elves by using a secret tunnel or will the booming surprise placed in the darkness put an end to our Heroes? Find out in this solo play Flintloque Micro Scenario...

“Soir are ye sure about this? To be sure we will catch the greasy pointy eared buggers with their trousers down but what if Colonel Lanyard knows about this tunnel and has put some blue coats in to stop us?”

It was dark. Pitch black in a warm Catalucian night as the Orcs of the 62nd South Mordor light company made their way as silently as possible around the rear of the Vineyard. There was a tunnel which ran right under the big house and would allow the Orcs to get right under the enemy and then to surprise them before the main attack was launched by the rest of the force led by Captain Churlie Morrorc. The vineyard was a hiding place for agents of the Farternety a secret organisation within the Ferach Armee which had the goal of murdering the Duke of Wheeling-Turn. Within it were hundreds of Elves under the command of Colonel Gerri Lanyard a skilled veteran of Mordred's columns. Attacking from two sides might just carry the night.

“Aye Padrag I'm sure. A risk but well worth it. Anyhow the plan is set now and we have an hour to get into the villa. Besides it's not like they could get a cannon into that tunnel.”

The marching Orcs laughed quietly until a glare from Rifleorc Koopa silenced them. Nice and quietly does it.

This is a quick game of Flintloque meant to lead into the full size scenario which comes after it. Can your Orcs make it to the end of the tunnel before time runs out and the Elves try to stop them? As you might expect Sharke's joke comes true and indeed Lanyard has managed to get a cannon down into the tunnel under the villa. The Orcs are not expected but the Elves have covered all the approaches. The aim of the scenario is simple for the player. To get his brave Orcs to the end of the tunnel. If you manage to get over 75% of the Orcs to the end it is a major win, 50% or more a minor win and less than 50% a poor win.

Set Up and Game Conditions

You will need a playing area depicting the tunnel which is 110cm long and 10cm wide. Set up the Orc section at one end all in base to base contact in any arrangement you choose. Set up the Cannon in the middle of the opposite end with four Elf gunners and three Elves with muskets to the left and right of it. Use 5025 War in Catalucia to generate the Elves as average experience level and you will need 5027 Grapeshotte for a 6lb Cannon and average experience level gunners. For the Orc section you will need to refer to 5109 Sharkes Chosen four page insert for character rules. The section is as follows:

This adventure takes place in total darkness and with the solo play rules taking the part of the defending Elves. Play as normal but keep in mind silence is your friend. There is a time limit of ten turns for the game and if the Orcs are not at the opposite end of the playing area by the end of turn ten they lose. There is a chance the Elves will hear the Orcs as they advance any faster than Half Step March and if they are 40cm or less from the mouth of the cannon. The Elves will not act until these conditions are met. At faster movement rates roll 1D10 and on a result of 6+ the Elves react. Add +1 for Slow March, +2 for Quick March and +3 for Double March and +1 if within 60cm of the cannon. Use fastest movement rate of Orc section.

When the Elves react to the Orcs they will fire the cannon which is loaded with Roundshotte for its first firing and then reload it as best speed always using Caseshotte after this. Range is irrelevant. The Elves will fire the cannon as soon as possible after this each time. There is a chance an Orc will see the lit match just as the touch hole is sparked and could throw themselves flat in time. Roll 1D10 for every character and on a 1 they go prone and are missed. All other characters are treated as normal. Elves with muskets will fire when an enemy is within 20cm of them.

In all other respects the Elves take no other action than to stand, to load, to fire.

Miniatures for this Scenario

You can use suitable Flintloque miniatures from your collection for this micro scenario. It is helpful to have Sharke and the Rifleorcs (5109) and we used 54008 62nd Foote Light Company for the Orc skirmishers. A great pack for the Elves is 51035 which contains a cannon and four gunners with 51026 for the Elf Infantry.

This is a short game which was play tested three times and each time the Orcs, with losses won. Which is as it should be but the question is how many Orcs will make it (this impacts on the following scenario). Playing time of about 15 minutes and nail biting tense at times. It is based loosely on a scene from 'Sharpes Assassin' the latest title in that series by Bernard Cornwell but with the location moved from France to Catalucia. Enjoy!