A Flintloque Scenario by Carl Birch 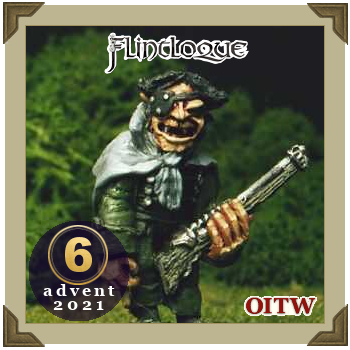 Miniature painted, based and photographed by Felix*

Sharke and Froderorcson's Elite Orc Rifles take on three sections of Ferach Elves to regain lost honour (and a certain article of clothing).

Sharke gently laid his telescope down on the rock in front of him. To his left lay Sergeant Harpy, his long-time friend and comrade, whilst on his right sprawled Captain "Sweat" Villiam Froderorcson, of the 60th Loyal Eastern Orc Colonial Rifles. Below them, at the base of the gently sloping hill where they lay, was a valley, green and lush in the summer sun. Flowing through the valley, cutting it roughly in half, was a shallow, inviting stream. It was this softly gushing creek that was the object of the rifle Orcs attention.

Sharke rubbed his hand thoughtfully across his chin. He looked at Harpy, then at Froderorcson. "What do you think?" he asked, looking once more at the inviting brook. "Well soir," muttered Harpy, "the lads could do with a rest and a soak." Sharke looked at the one-eyed Froderorcson. The captain fingered his mouldy, black eye-patch and nodded his agreement.

Sharke looked around the valley. Lifting himself to his knees, he said "Harpy, detail sentries. We’re going swimming!"

Sharke lay back in the stream, naked but for his boots, relishing the coolness of the water as it ran over his body. It felt good to wash the days-old dust and dirt from his body. Around him, his men were lounging both in the stream and on its banks. After ducking his head one more time into the water, Sharke stood and called "That’s it lads, time to move on." The Orcs, grumbling and cursing, hauled themselves towards their equipment. Sharke put on his stained shirt and jacket and stretched, enjoying the sun that dried his body. Reaching down he grabbed his trousers. They were of high quality, comfortable and hard wearing. The leather padding on the insides of the thighs and the fine cut of the cloth were evidence that they had once belonged to a cavalry officer. Sharke gazed fondly at the trousers. He loved his trousers! His wistful mood continued as he reached down to remove his boots. His routine was rudely interrupted by a loud shout and the crack of a musket. The rifle Orcs started diving for their equipment.

Running down the hill towards the scrabbling Orcs, arms failing wildly, was young Purrkins. "lt’s the bloody Elves," the young Orc screamed. Sharke dropped his trousers and picked up his rifle. The first Elf appeared over the top of the hill. His high green and yellow plum marked him as a voltigeur. Sharke raised his rifle, but a crack from behind him indicated that someone has fired first. The Elf pitched over, a bright splash of red spraying from his chest. "Cavalry too!" yelled Purrkins. "Cavalry... bloody hells! Run for the rocks," bellowed Sharke before turning and heading towards the safety of the boulder strewn hillside.

Sharke was furious. They had all made the safety of the rocks, but he had left his beloved trousers behind. Even now, through the lens of his telescope, he could see a voltigeur pick up the pants and examine them. With a smile, the Elf stuffed them in his pack. Froderorcson had given him a pair of his own pants to replace those he had lost, but Sharke was not satisfied. The Elves had delivered the rifles a sharp slap in the face by forcing them into ignominious flight - and they had his bloody trousers! Right, it was time to teach the bloody "crappies" some manners and restore the honour of the rifles. Oh yes, and get his beloved pants back too...

This scenario of lost honour and lost trousers is a straight forward clash between those old adversaries the Orcs and the Elves. Before the game begins, the Orc player must designate (and make a note of - no cheating!) the voltigeur figure that has purloined Sharke’s kegs. The Elven player MUST NOT BE TOLD which one it is! Sharke himself will make every effort to engage this figure and regain his trousers. It will take one turn to search the unfortunate voltigeur for the trousers. To make the scenario more difficult for the Orcs, you might consider introducing the rules for Bakur rifles given in GM’s Corner in Orcs in the Hills Issue 2*. 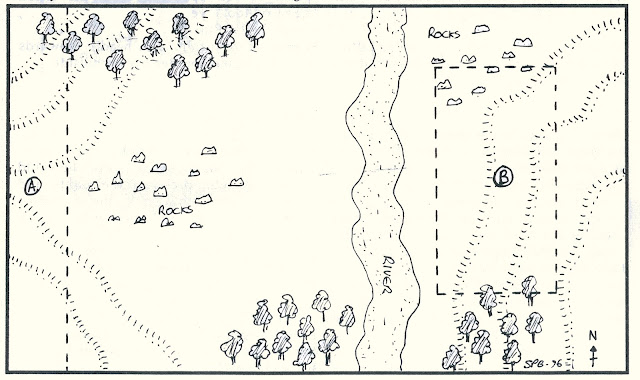 The small valley in which the scenario is set, is split by a shallow stream which can be crossed anywhere with only a -25% movement modifier. The clumps of trees are classed as woodlands with the normal firing and movement modifiers, whilst the gently sloping hills do not effect movement. The areas of rocks are impassable to mounted troops and are counted as scrubland for infantry movement and woodland for firing.

The Orc force comprises of two sections of rifles:

Sharke’s Rifles are exactly as detailed in the Flintloque game except:

a) Sharke is rated as Veteran. Rules for Veterans are as detailed in the GM’s Corner of Issue 2 of Orcs in the Hills...

b) The section is boosted by the inclusion of two new Orcs - Rifle-Orcs Roolf and Gurnak. They are both armed with Bakur Rifles and are rated as Average.

The Orcs deploy along the line A at the western edge of the battlefield. The Elves deploy anywhere in box B on the eastern side of the river. As the Elves are not expecting a counter attack, the Orcs move first.

The victory conditions for both sides are easy. The Orcs win if Sharke regains his trousers and the Orcs retreat off the battlefield with more than 50% of their number still alive (wounded figures count as alive of course!). If the voltigeur figure is routed, do not remove him from the table. It must retreat back towards the Elves base line until it’s movement carries it off the table. This ensures that a suitably irritated Sharke (or one of his men) could still catch him.

The Elves win if they keep the trousers and fight off the Orcs. Of course, the Elves should not know the target of Sharke’s obvious displeasure (if they do, ensure that the figure is not left skulking behind a rock at the back of their lines!).

This elite body of rifle-Orcs is recruited from the loyal colonists of Albion's Eastern Colony, the ungrateful inhabitants of which are in revolt. They are well trained in light infantry tactics and are experts in moving and fighting in wooded terrain. The harshness of the Eastern Colonies and the hostility of the native inhabitants means that the vast majority of colonists are given a weapon as soon as they can hold one and the accuracy and range of the Bakur Rifle makes it a popular weapon amongst them. The 60th Rifles wear the same uniform as Sharke's lads but with red facings instead of black.

The above scenario can easily played using the Flintloque 3rd edition ruleset.

Stats for Sharke's Rifles can be found in Alternative Armies' free booklet, Sharke's Chosen, which you can download as a PDF on thier website here.

The Ferach sections can be easily created using the normal rules on page 46 of Flintloque: War in Catalucia (5025).

The scenario plays brilliantly with the Flintloque 3rd Edition solitaire rules used to control the Elves. On the Solo Aggression Table I used the Defensive results for both of the Elves foot sections and Aggressive for the Cavalry section.

The above scenario was originally published in the Winter of 1996 in issue 5 of Wessex Games' Orcs in the Hills magazine. and was first published online on Orcs in the Webbe on the 27th January 2010.

However, it was absent for several years due to a prior regeneration of the website not transferring everything over correctly, the wrong has now been righted and it returned on the 6th December 2021 as the sixth entry in that year's Advent Calendar and, of course, part of Orcs in the Webbe's ongoing Flintloque Archive Project.

* Note that the photo has been used without permission and will be removed if requested by the copyright holder.