"The Green Shoots... in Llednevir" 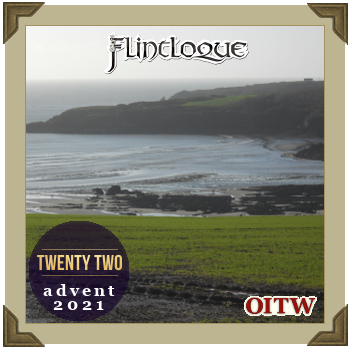 After many years of rain and death the ground in Llednevir had become very fertile. Too fertile. The combinations of water and 'raw materials' have become the bedding for the latest evil to plague the land...

After many years of rain and death the ground in Llednevir was becoming increasingly fertile, the right combinations of water and raw materials became the bedding for the latest evil of the land.

It started with a light moss where the grasses used to cover the land, and then there was the trouble with lichen.  With each dawn the moss had grown further.

The folk of Tarrwen Harbour initially welcomed the verdant growth as the land recovering and lending a picturesque quality to the otherwise windswept and rain washed town.

But one day they found Ted the Gardner, who tended the graves of the churchyard.  He was in his usual spot, asleep on the grave of Llanduff Gwynn.   Asleep, is what they thought.  The green moss and roots had grown over and covered him with only his head remaining visible.

Over the next week the encroachment was noticed reaching into the town.   Anwyn MabStefan was the next to go.  The green growth had scaled her wall and entered through her window.   The Moss had smothered her in her sleep.

It wasn’t until the light of the next full moon that the danger became acute, and the Moss began suddenly moving at a much faster rate.  The Moss split and individual clumps of it began to roam independently.

They were making for the centre of the town and the folk who slept there.

The townsfolk are awoken by the sound of the Bell of Owen the Plod ringing from the door of the police house in the centre of town.

The ways out of the town are over grown with moss and lichen, and devours slowly any who try to penetrate the Green.

One place that remains untouched it Selwyn’s Salt Distillery on the Southern end of the harbour bay.

The townsfolk may fight their way there.  With a bucket of salt and a careful shot they may dessicate a moss creatures; if they really wish to make sure that it remains defeated they should burn it also.

Buckets of salt are not aerodynamic and so the villagers must risk getting up close and personal with the Moss creatures.  If the Village can hold out until morning then they may begin to clear the living Moss in a more structured way.

Use the well known and well loved map of Tarrwen Harbour. At each end of the harbour mark up Selwyn’s Salt Distillery and the Flaming Beacon. 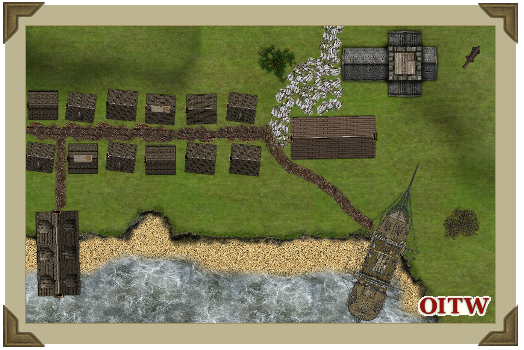 The game will last for d12+6 turns when dawn will break and any existing Moss will become stationary.

There are 12 fighting Villagers and they may include Owen The Plod, Selwyn the Salt Seller, and any other characters that have survived your adventures in Llednevir.

An Assortment of Hobgoblins (Who May, or May Not, Be Dead in Your Llednevir)

Owen the Plod / Hobgoblin Veteran / Irregular
Valley Voice / Death of a Boyo
Gammy Leg: Owen’s Movement is reduced to 0 unless being aided. If aided by the little boy he may move 1D10 cms per turn. If aided by Lleu or Hatt he can move 2D10 cms.

Madoc, Widow of Big Lleu The Big (assuming he is dead)
Hobgoblin Veteran Irregular
Brawler / Pub Brawler (Orc Flaw)
Madoc, as befits a woman of her status, is huge and does not use weapons.

Evans the Deaf
Experienced Irregular Hobgoblin
He is armed with a Staff (+2 in melee combat).

The suggested number of Moss creatures is nine to start with.  This may be varied to adjust the difficulty.

The Moss Creatures share stats with Zombies, but do not have the instability of those cursed creatures and have no need of Liches.

The villagers must survive until dawn to win.

The Moss must wipe out all the villagers before the dawn, they will then swallow the village in is green...

An Orcs in the Webbe Original! "The Green Shoots... in Llednevir" was written exclusively for OITW and was published on the 24th of December 2021 as the twenty-second article in the 2021 Advent Calendar.

CJ's Llednevir Chronicles have been a huge success here on Orcs in the Webbe, if you've not read them (or fancy re-reading them) they are rather good, click on the  maroon tag  below and to the left.