Section Rules and Background for Flintloque & Slaughterloo by Gavin Syme 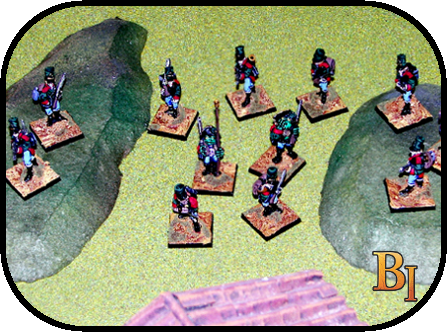 In the first of a new series of wargame articles we look at a customised section of Flintloque miniatures belonging to Gavin Syme which he uses in his own games of Flintloque and Slaughterloo. Let’s take a look at Wyndorcs Rangers!

A warm breeze and the gentle swell of the ocean could make you complacent. Such delightful sounds of bird song and the chatter of the native Korsucan Elves as they passed barrel after box along long lines between themselves could lull the mind. With their great wooden hulls sweating in the high sun the ships of the Royal Navye sent troops and supplies ashore. But to be complacent and to be lulled would mean death as Korsuca was under the heel of Armorica and the Army of Albion would have a mean task to eject them from the small island. The small expeditionary force would need the aid of the Wild Elves themselves if they were to be victorious in the struggle to come.

Captain John Wyndorc travelled to the isle of Korsuca as part of Surjon Moore’s expeditionary force with the task of taking command of locally raised ands trained light infantry. Wyndorc is one of several Orcish officer with these orders and all of them are expected to show great courage and independence while on duty. In addition to the 51st Foote and the 24th Foote disembarked from transports in the fishing village of Gulpelta along with elements of cavalry and artillery the force would depend a lot on these local allied troops. Against them the garrison based in the town of Calfi commanded by General Egert Eclaire containing roughly ten thousand troops from across the Ferach Empire.

Now that Surjon Moore has come to Korsuca he has a real challenge to overcome. The Ferach outnumber his troops and he is already short on supplies due to the loss of several ferrying boats in rough seas. These boats contained virtually all of the spare flints for his soldier’s muskets meaning that aside from what they carry the Orcs could soon find themselves unable to use their beloved Bessies. Each Orc carries two or three spare flints but typically they will break one in each engagement so it was not a great start to the campaign to liberate the island.

It fell to Captain Wyndorc and his Rangers to raid the Armorican depot at Tickleto which was guarded by the light company of the Nepolise 82eme Regiment. The Todoroni were supposed to be veteran troops from the Al-Garvey campaign but in reality they were in a sorry state and despite outnumbering the Rangers some three to one they were easily seen off. While Wyndorc was busily ordering his Elves to load their packs and even pockets with as many linen pouches of flints as they could he was approached by two Todoroni; both with their hands raised in surrender. As it turned out Privates Portopotti and Lavetti were now deserters from the 82eme and professed hatred for the Ferach Empire having been pressed into service against their will.

Wyndorc decided to believe then especially after they revealed a secret cask buried next to the stone depot building which contained two dozen Blunderbusses destined for Ferach grenadiers. Taking the weapons, the looted flints and his two new recruits the Rangers headed back to their camp.

The 3rd Korsucan Rangers now await their next mission… whatever it might be.

Miniatures for this Section

For games of Flintloque with this section I used the following. Firstly a copy of 5025 Flintloque 3rd Edition War in Catalucia plus the free racial sheets from Alternative Armies for the Wild Elves of Korsuca. From the miniatures range I used codes 51045 Korsucan Ranger Command (2), two packs of 51025 Korsucan Rangers (8) and two Small Todoroni from 56123 Nepolise Light Company Command. Added to this some bits and pieces from the AA Bits Range and that completed the section.

One of the best things about Flintloque is the sheer variety in the ways you can create and customise characters. From racial type, to experience level, troop type, weapons, skills, traits, flaws and unique options too every character is different.

While all of the miniatures in this Section have their own profiles and some of them have unique statistics too you can ignore them and set about creating your own vision of this section from scratch. Take a blank Flintloque roster and fill it in with either the following statistics of your own numbering each character as you go.

If you are the kind of player who makes use of the points system in play then you will be able to cost out the section from the the game books. Any unique parts of profiles are given a points cost in the profile. 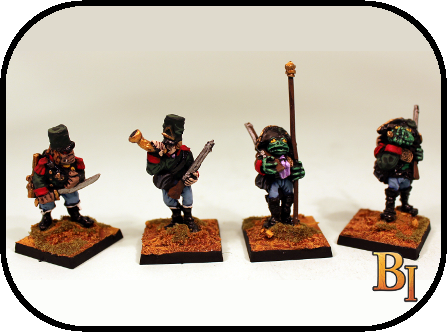 Fresh faced and very capable Wyndorc was trained in the theory of light infantry by Surjon Moore himself at the camp near Shavedcliffe in Albion. He inspires loyalty from his troops and is keen to liberate Korsuca from the Ferach tyrant.

One of the first to accept Wyndorc as section leader after the death of Captain Angelo this officer now acts as the rally point for the Rangers and can be relied upon in battle.
Profile: Wild Elf, Experienced, Light Troop, Elite. Dwarf Jager Rifle, Musical Instrument.
Skills/Traits/Flaws: Alert, Athletic, Animosity (Portopotti).

Formally of the 82eme and now in the ranks of the Korsucan Rangers Todoroni troopers Portopotti and Lavetti are not well liked by some of the Elves in the section and have yet to prove themselves in battle. Ruggi carries the banner for the section but will he hold on to it?

Profile: Little Todoroni, Average, Regular. Dwarf Jager Rifle, Standard Bearers Pole.
Skills/Traits/Flaws: Slimy Tongue, Grenade Tongue, Dazzling Uniform.
Return to the Foe (-5 points). The character is not sure his new allies are for keeps and if he is within 10cm of an enemy character he must roll 1D10 and on a result of 10 he defects back to their ranks and is controlled by that player instead.

Ugo is not a thinker, he just follows his friends and as a result he is now with Eyndorc. Addicted to cheroots he is not as fit as he might otherwise be but he is a fairly competent soldier.
Profile: Little Todoroni, Average, Regular. Dwarf Jager Rifle.
Skills/Traits/Flaws: Tap Loading, Rapport (Portopotti), Bad Knees. 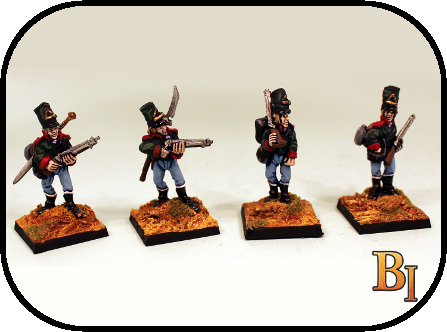 Two sergeants in a small force is rarer than you might think but Wyndorc likes it that way as it drives the lads onto victory. Belvedere is a handsome fellow and he knows it but this sometimes leads to trouble for him. He is a dab hand with a polearm though.
Profile: Wild Elf, Experienced, Light Troop. Dwarf Jager Rifle, Halberd.
Skills/Traits/Flaws: Quick Reflexes, Arrogant Peakcock, Animosity (Lavetti).

A solemn and joyless Elf Forello does his duty and says little. Some think he has a lover captured by the Armoricans somewhere on the island that he thinks of constantly.
Profile: Wild Elf, Average, Light Troop. Dwarf Jager Rifle.
Skills/Traits/Flaws: Graceful Steps. 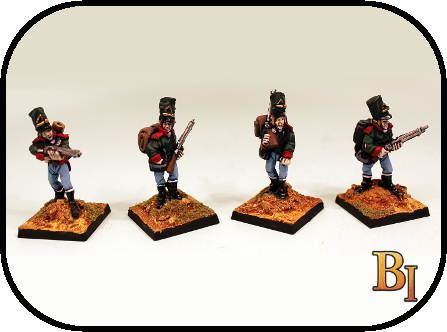 This Wild Elf often suffers the delusion that he is not real and only a figment of the imagination of a vastly talented writer. Crazy eh!
Profile: Wild Elf, Average, Light Troop. Dwarf Jager Rifle, Standard Blunderbuss.
Skills/Traits/Flaws: Steady Hands Elf, Nerves of Steel.
Am I Real? (-12 points). When killed in play this character looks to the sky and curses his creator. As a result the player loses two Command Points from their current hand.

The newest member of the section and one of the poorest soldiers on Korsuca. He may not live long!
Profile: Wild Elf, Raw, Light Troop. Dwarf Jager Rifle.
Skills/Traits/Flaws: Low Pain Tolerance, Forgetful.

Third son of a formerly wealthy land owner this new ranger is a cruel and sadistic creature who blames the world for his own problems and more especially the Orcs of Albion for their bringing of the Ferach to the isle of Korsuca in the first place. Time might heal these imagined insults but…its not very likely!
Profile: Wild Elf, Raw, Light Troop. Dwarf Jager Rifle.
Skills/Traits/Flaws: Cruel Pointed Ear, Vanity for Advancement, Animosity (Wyndorc).

The fight to liberate Korsuca can be fought not only as a skirmish but also as a battle too using the Slaughterloo mass battle rules. If you decide to do this then you will need a copy of 5030 Slaughterloo.

You can find Korsucan Rangers as a unit profile on page 125 and page 130 of the book. Use this profile in play. If you wish you can use a unique profile for Captain Johrn Wyndorc as follows.

Captain Wyndorc (Special Unit Officer) (50 Points)
Leader of a glamorous band of Korsucan Rangers Wyndorc is a fine officer who can get his troops into the enemy faster than most can. He may only be the officer of a Light Infantry unit of the Grand Alliance.
"Into Them!": Once per game Wyndorc may add 10cm to the Charge Bonus of the unit.

Miniatures for Your Collection

All the miniatures mentioned above are available now from the Alternative Armies webstore and you can see the product page for each by clicking on any of the unit codes.