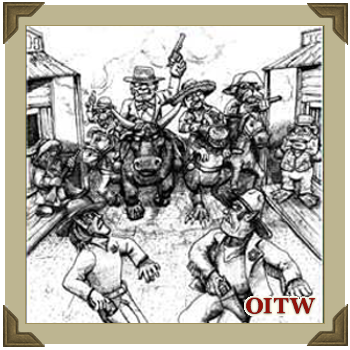 The Dark Elf avenger, El Lupe, must rescue some slaves sentenced to death by the corrupt Commandant Jamón in this two player scenario for Alternative Armies' skirmish game, Frontear.

In 2008, after the success of Flintloque Reloaded, Alternative Armies released a follow up using Reloaded's updated "2nd Edition" ruleset which told the history of the Amerkan continent in the West of Valon far from the Mordredian Wars in Urop. You can read more about it on Orcs in the Webbe by clicking here.

The commandant looked down at the black clad figure. He signalled his Sergeant who threw a bucket of water into the cage all over the prone hero. "Up!" screamed Jamón.

El Lupe stirred and slowly raised his head and quickly glanced around him and saw the predicament he was in. "Good day to you Commandant Jamón." he smiled widely "I see you've finally bagged your elusive wolf".

Jamón grabbed his sword hilt and started to draw his rapier. The rotund Sergeant met Lupe's glance and left leapt forward, "No, Commandant. I have a better idea, we can deal with El Lupe the same way as the slaves."

Jamón grinned, "Ah Queso, always thinking. Guards lay a fuse to this cage just like the others. Good day El Lupe, we shall not meet again." with that he idly walked to his coach and climbed on board, he cast a glance back to the malevolent Corporal Sangre. "Sangre! You ran the mine for me, you can destroy it for me. As soon as I'm out of the canyon light the fuses then meet me at the ship."

Sangre's 'L' shaped scar distorted as he broke into a huge grin, "Yes, commandant," he stared at Lupe, "with pleasure."

As Jamón's coach started off, Sangre headed down to the centre of the canyon. Looking around Lupe saw what was planned, that bastard Jamón had locked the slaves who'd been working his mine in cages around the canyon and led fuses to gunpowder barrels by each one. He was going to destroy all the evidence of his illegal mining operation. Queso, always a well meaning fellow who never fully signed on with the bloodthirsty ways of Jamón, had done his best in getting his execution stayed for a while but how was he going to escape.

Across the canyon Queso hurriedly untied the ropes holding Lupe's majestic mount Cycloné. Furtively he glanced around and after checking Sangre was busy with laying the fuses, attached a set of keys to the horses' bridle. "Now pretty one, take this to your master yes? Go on." Almost as if she had understood the words spoken by the fat little man, she set off, silently walking towards the cage where El Lupe was imprisoned.

On the ridge of the canyon, hidden from sight of those below, a figure in a black dress with a veil over her face smiled and walked away...

You can't let Jamón get away with this outrage. You knew he was shutting the mines due to the increased spider activity but to kill the innocents workers... He will pay for this.Thankfully Cyclone arrival with the keys is just in time, you must rescue the prisoners and get them out of the mine.

Damn that Lupe, somehow he's escaped. You'll make him pay for all his actions especially for scarring your face.

El Lupe and his Allies

El Lupe [Legendary Dark Elf] 43 Points
Saber (+2), Whip, Knife (+0), 2 Ferach Duelling Pistols
Merit: Expert Swordsman
The down-trodden peasants of El Dorado cried out for a hero to release them from their oppressors and their calls were answered. Known only as El Lupe (pronounced as loo-pay), this dashing, masked avenger rode forth to right the wrongs of the cruel Acalde of Los Diablos. Trained by the finest swords-elves in Catalucia. His secret identity, known only to his deaf-mute manservant Manuel, is actually that of a local gentle-elf: Don Diego della Toyota. Don Diego presents the facade of a scholarly elf with no interest, whatsoever, in local politics. The Acalde has been completely fooled by this pretense and is at a loss to explain who is perpetrating these cunning raids.

There is no map provided for this scenario. The table should be set out like a bottle neck canyon with only one side offering an exit in the form of a thin road. All the other edges are sheer cliff faces and cannot be scaled. Place 4 cages around the playing area, roughly in all four corners of the canyon, each with a barrel next to them. Each one should be 30 to 40cms from a central point. String should be laid from the central point to each barrel representing the fuse. Lupe is placed in one cage and three slaves are placed in each of the others. Cycloné begins play by Lupe's now open cage. Queso and Jamón are placed by the central point and the other eight soldiers are placed randomly around the canyon but at least 8cm from a barrel.

Expert Swordsman: Characters with this merit get +2 in hand-to-hand combat when fighting with a sword.

The Fuse: The fuse burns at a speed of 6cm a turn. This happens at the start of every turn before any character moves or orders are given. The fuse can be cut by any character that engages it in a melee action. No dice need be rolled and no results are applied.

The Barrels: Each barrel is, somewhat predictably, full of gunpowder. because of this the Acalde will not go within 8cm of them. Once a lit fuse reaches it it explodes. If this happens, the following effects are applied immediately. Each barrel is treated as a 'Dynamite Boom Stick' explosion centred on the barrel. After one (or more) of the barrels explode everyone who is susceptible to morale checks must make one next Morale phase as if Charged by cavalry.

The Cages: The cages are made of the finest Mehican steel and cannot be forced open. Only the keys El Lupe carries can open the cages.

The Whip: The whip attacks like a throwing knife in ranged combat however the player can opt to attempt to use it to disarm his opponent. This must be stated before the attack roll is made. If the attack is succesful no wounds are applied and the weapon flies off 1D10 cm in a random direction. The rules for Throwing Knives are in Alternative Armies supplement “Distractions & Asides 2. Thrown Rocks & Knives” which can be found in the files section of Alternative Armies Notables Yahoo group.

Cycloné: Lupe's horse is a character in his own right. A powerful, intelligent, dark black creature, his statistics can be approximated by those of a Light Horse with a +2 ability to attack in Hand to Hand Combat. Cycloné can also perform simple tricks, such as coming when called and attacking on command. The players should assume that he is capable of doing anything he's seen a horse do on television or the movies.

Queso: Queso is not particularly loyal to the evil Jamón, preferring to leave more bloodthirsty actions to people like Sangre. He is controlled by El Lupe's player but can not make aggressive actions towards Sangre and his fellow guards, likewise he cannot be attacked by Sangre or his men. Always aware that Sangre could report him if seen doing anything untoward, he cannot make an attack (shooting or melee) against the fuse unless it looks like he's doing something else. This rule needs a bit of creativity on the part of El Lupe's player. If an action in any way benefits the El Lupe player (cutting a fuse, wounding one of Sangre's men etc) then Sangre's player gets to make an improbable action roll to see if Sangre notices. If he suceeds Queso becomes a valid target for Sangre and his men and Queso can attack them back. If he fails he does not suffer one wound, play just continues.

Initial Carving: If he wins a Hand to Hand Combat Lupe may choose to carve his trademark initial "L" into his opponent's uniform (as he once did to Sangre's face after the despicable Colonel had his way with a village girl against her will). This does no damage, but the dazzling display of swordsmanship causes his opponent to make a Morale Check vs. Death of a Section Leader.

For a character to perform an improbable action they must make a base percentile roll to succeed. If they fail, they automatically suffer one Wound.

"Mining All Within" was written exclusively for Orcs in the Webbe and was published on the 22nd February 2008.

It was absent for several years due to a prior regeneration of the website not transferring everything over correctly, the wrong has now been righted and it returned in August 2018 as part of Orcs in the Webbe's ongoing Flintloque Archive Project.

El Lupe and Cycloné were both created by Mike Baumann.

The improbable action rules were written by Steve Blease and Mac Coxhead.