Master model-maker, Tony Harwood, talks through the design, development and background of some of the scratch built masters for Panzerfäuste.

Earlier this year I received an e-mail from Rob Alderman telling me of a new venture he was looking to become involved with. The project was the re-launch of Panzerfäuste a game that was originally written by Steve Blease over eighteen years ago. Rob’s plan was to re-write the rules and have the Gnomes and Dwarves re-sculpted by Prodos Games before launching a Kickstarter project in partnership with Steve. Rob was enquiring if I would work on some themed buildings to be used to support the game.

I have to admit that at first I was a little reticent as Weird World War Two is not a genre that had, up to then, interested me. However I did some Internet searches and scribbled some designs off to Rob. The first was a traditional Gnome Mushroom House and although I was expecting the idea to be passed back and forth, Rob immediately commissioned the building. 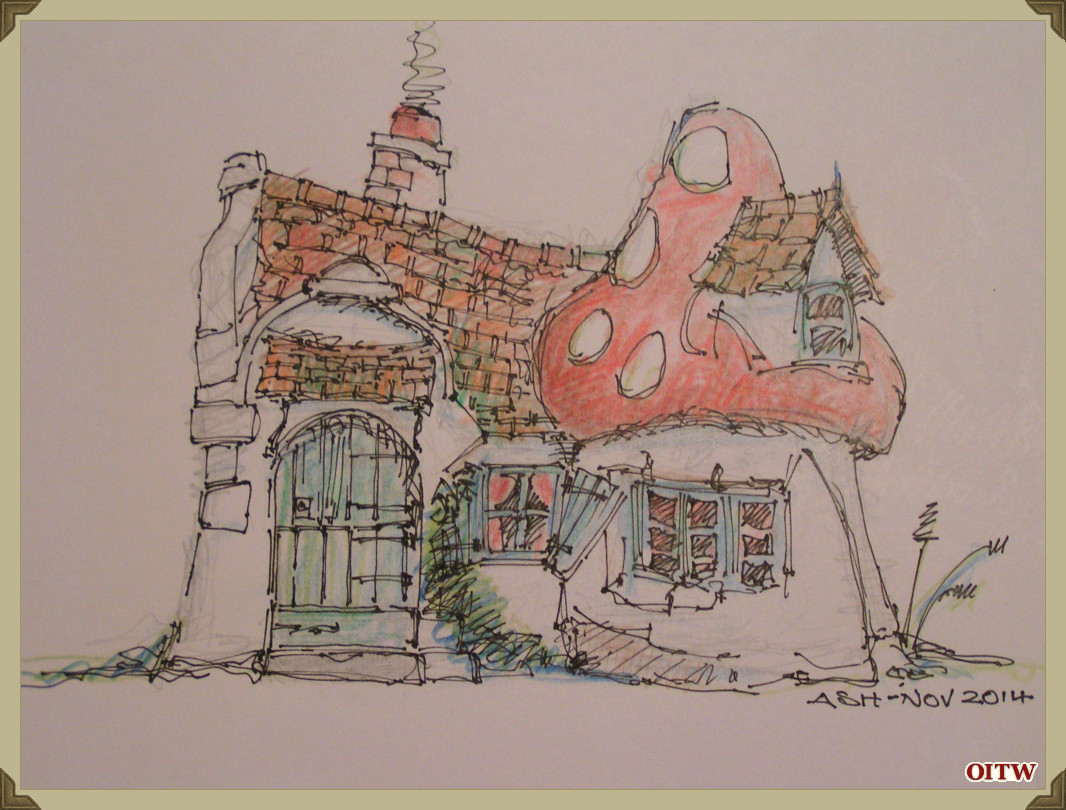 The building uses traditional construction techniques – well traditional for me anyway, a corrugated cardboard core with DAS modelling clay built up in layers. Within a couple of days – images of the first structure were ‘pinged’ to Rob and we agreed to meet up to discuss this model.

We met in a Costa Coffee house in Leamington Spa, with me clutching the nearly completed Mushroom House in a plain cardboard box. At this time I was still not sure that I had fulfilled the brief, as this was an unusual brief and I was trying not to reproduce a ‘twee’ or traditional Fairy Tale Gnome House but something that would also fit in with some of the images I had received from Rob.

Over coffee I sketched a second building, really it was just a simple pencil sketch of a Gnome Bakery, on a scrap piece of note paper that Sue had in her handbag! I wanted something Gnomish but also usable in ‘other’ games. Rob saw the sketch and even before I had finished it said that he wanted me to go ahead and produce it! Two commissions from a ‘we are thinking of’ e-mail conversations. 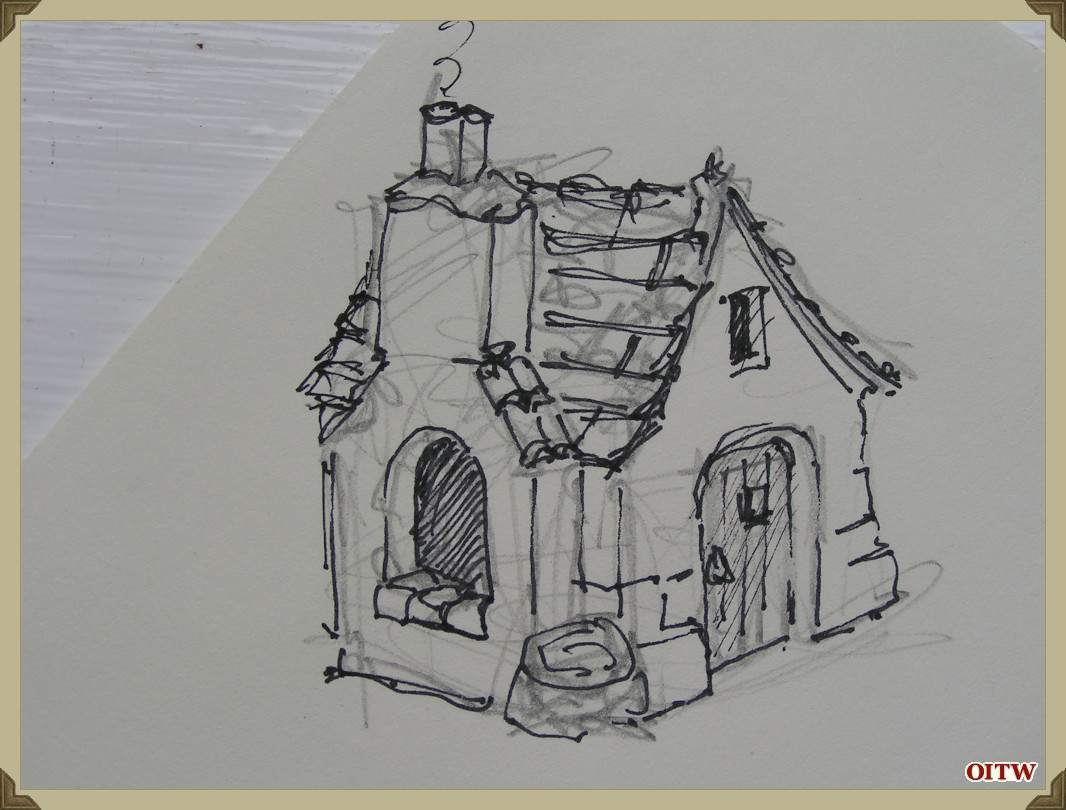 At this stage I was working on two buildings and I have to admit that the bug had well and truly bitten. I even started a third building, this time a wooden structure with a thatched roof. I kept posting images of the buildings and was a little disappointed when the third building was rejected as too ‘Fantasy’, however this master was later re-worked and now features on my Blog as The DelBoy Hovel and is used alongside my Pax Bochemannica Halflings – so nothing lost.

Another meeting at Costa Coffee this time to hand over the two completed models I thought that I had finished the collaboration – but No, Rob supplied me with some snail shells and asked if I could build a Snail Shell House! As it turns out I felt that these shells were too small and they were later returned to Rob having not been used – but this had made me think.

“What about a Snail Breeding House?”

The logic being; that the Gnomes would rear the young snails in purpose built stone Breeding Houses (specially built and highly specialised breeding houses) until they were old enough/large enough to be placed in out-door pens. Rob commissioned the third building even before the coffee had arrived and I went back to Droitwich to start work on the model. 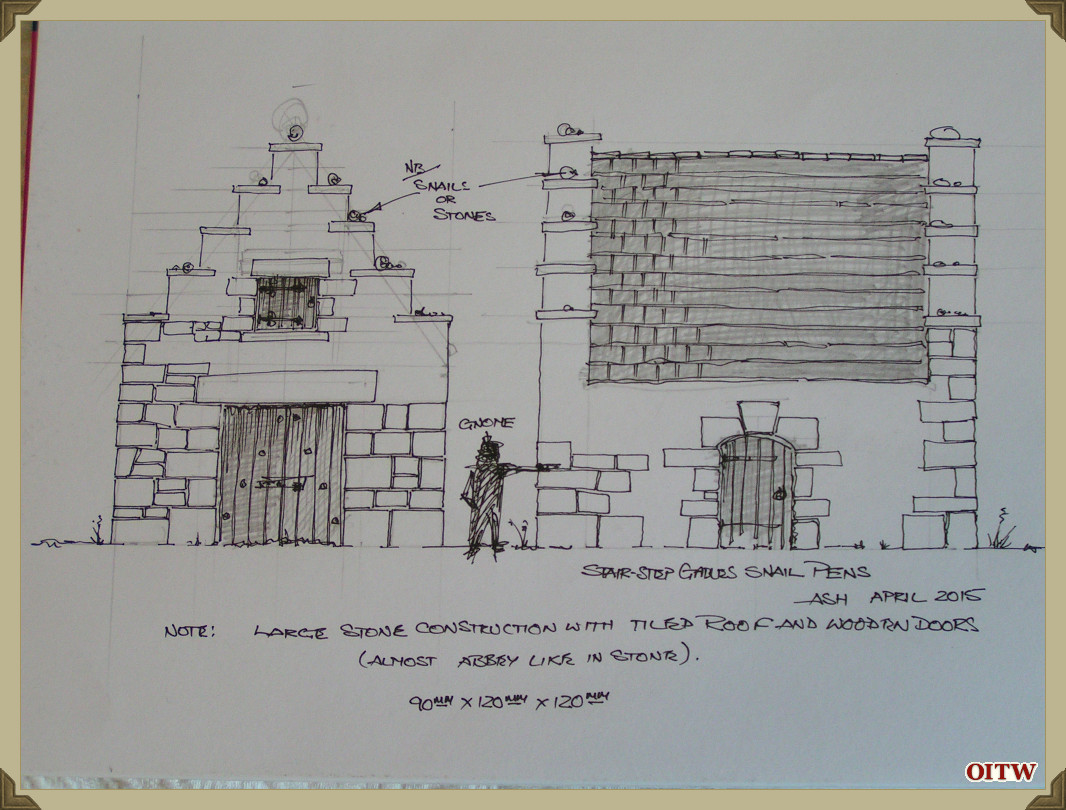 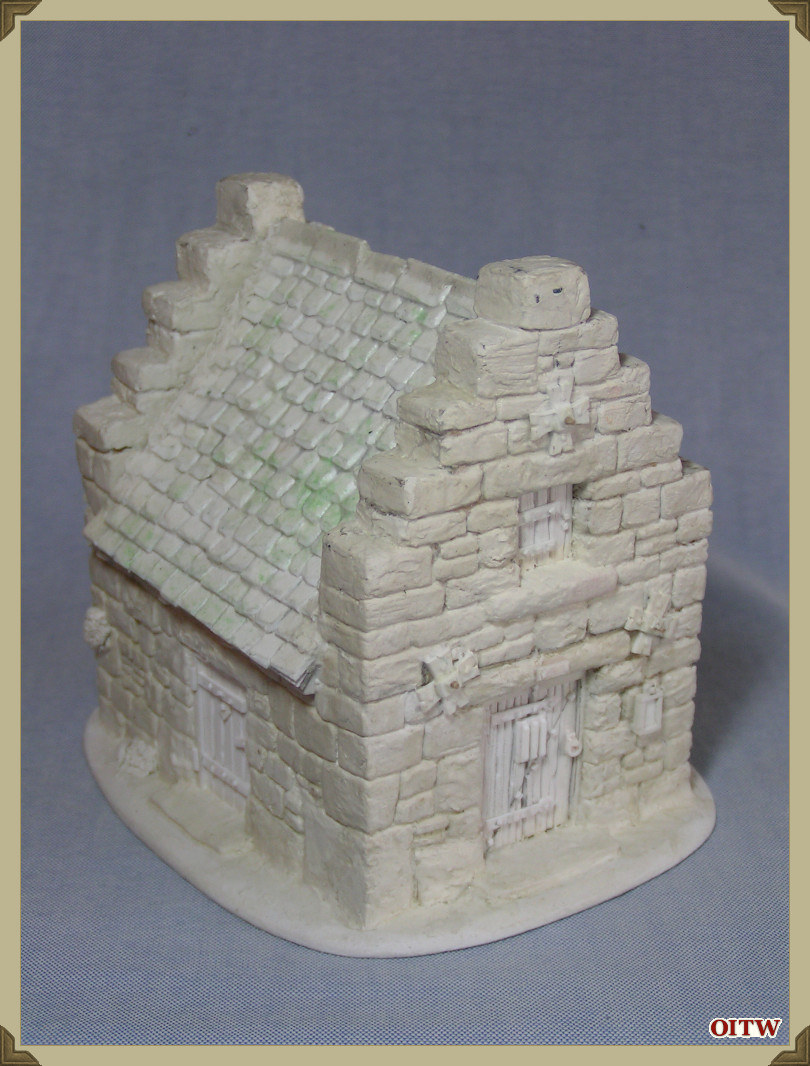 But – The idea of a Snail Shell House kept gnawing at me. 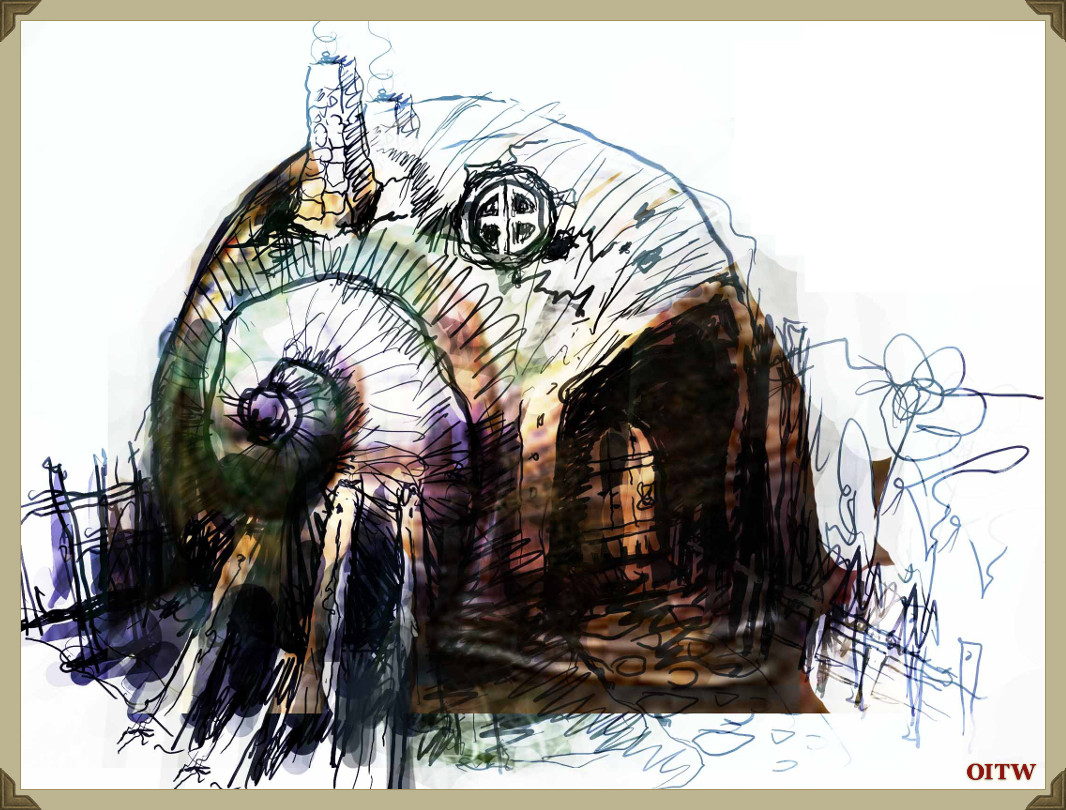 I searched and searched for a suitable donor Snail Shell – after all how hard could it be to find a garden ornament that could be used as the base? As it turns out – very hard and in the end, I scratch-built the shell and this Snail Shell House. 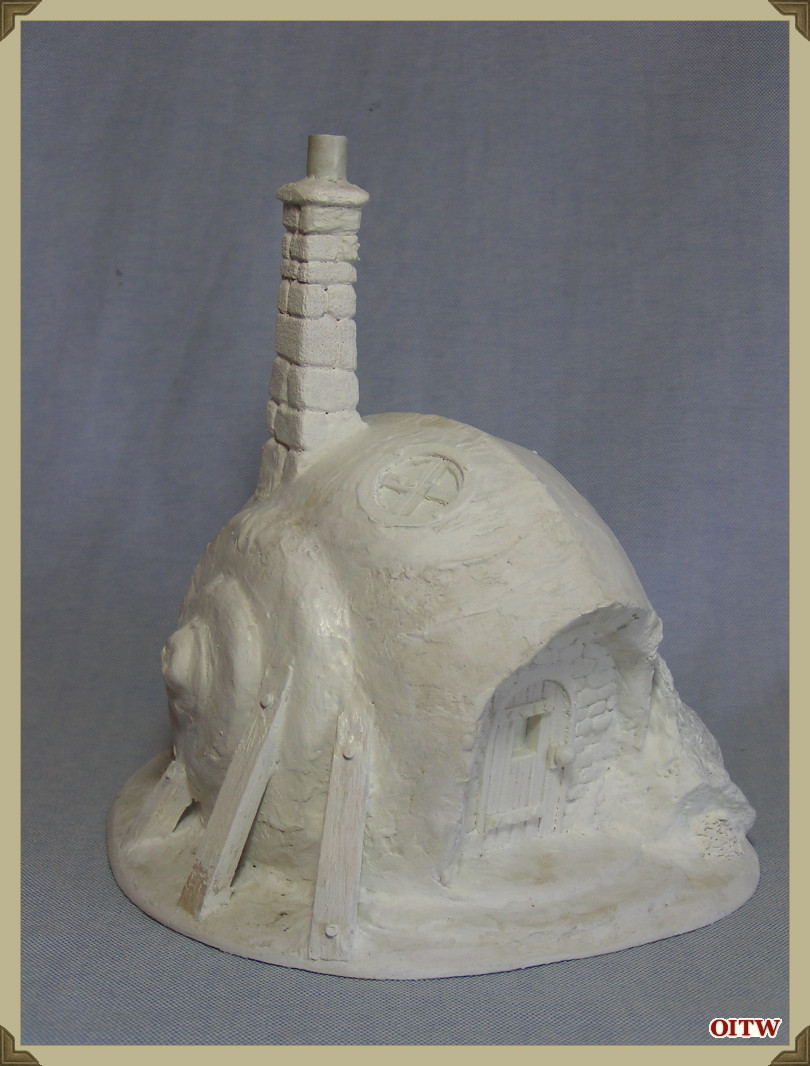 So now we have four structures.

The next visit with Rob, was at the new Prodos offices (now closed) and I passed over to Rob the ‘masters’. In return I received one of the very first resin casts of The Mushroom House and a copy of The Gnome Bakery model. As I was leaving, Rob asked me what else I was working on, and I replied that apart from a couple of magazine articles which in truth were nearing completion. I had very little on. Rob then asked if I would produce some Panzerfauste wall sections. Remember those snail shells?

I used some of the smaller snail shells to add character to some scratch-built wall sections. I wanted the walls to be used in addition to ‘standard wargame wall sections’ so made them pretty generic. I would expect them to be interspersed with standard resin wall sections.

That must be the end! What else could I now model?

“What about some Troglodyte structures?” Asked Rob.

The request was a big surprise. Not because I wasn’t sure that Rob liked the earlier models, but at this time the Troglodyte models and imagery was secret or still being worked on. Over the next couple of days various images, sketches and e-mails were sent to Rob but none were just what he was looking for. Drastic times called for drastic actions and I e-mailed Steve Blease with a request that he give me some guidance as to what was expected.

Some messages later and I had what I thought was a good idea of what was needed. The first Trog building is a deserted Dwarf Ore Smelter with a wooden shack stuck on the side. The background story being based around the fact that as the Dwarves retreated the Trogs re-engineered the smelter into a make-do watch tower. 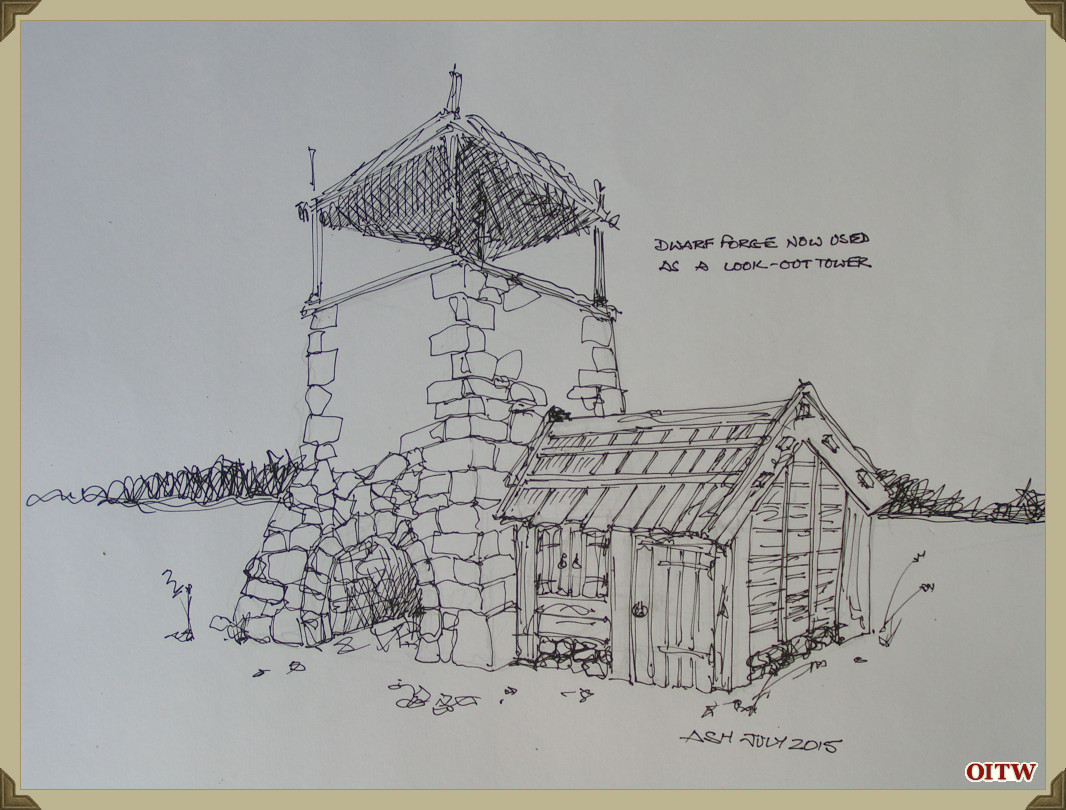 During construction of this building I had shown it to a number of people who all passed comment on how I had caught the mood of an abandoned structure with a newer add-on.

The detailing on this model includes a Mercury Distillery, something I had seen and read about in an American Railroad magazine. See I told you this project was weird!

Later I kept in touch with Steve who would on occasion send me some comment or other. One such e-mail suggested a ruined Dwarf pillar that had been re-engineered as a fortified house or bunker might work. I did an Internet search and came up with a suitable Dwarf pillar as well as a WW1 Maginot Line Bunker or Pill Box. I built the pillar from 3mm plastic card and then decided to make a mould of it to produce plaster copies.

The casting mould was done with an Alginate moulding kit that I had picked up some time ago from a charity shop. The logic being that if it didn’t work, then I could always use the original model. As it turned out I managed three Plaster of Paris pillars which with the original plastic card master gave me four pillars to work with. 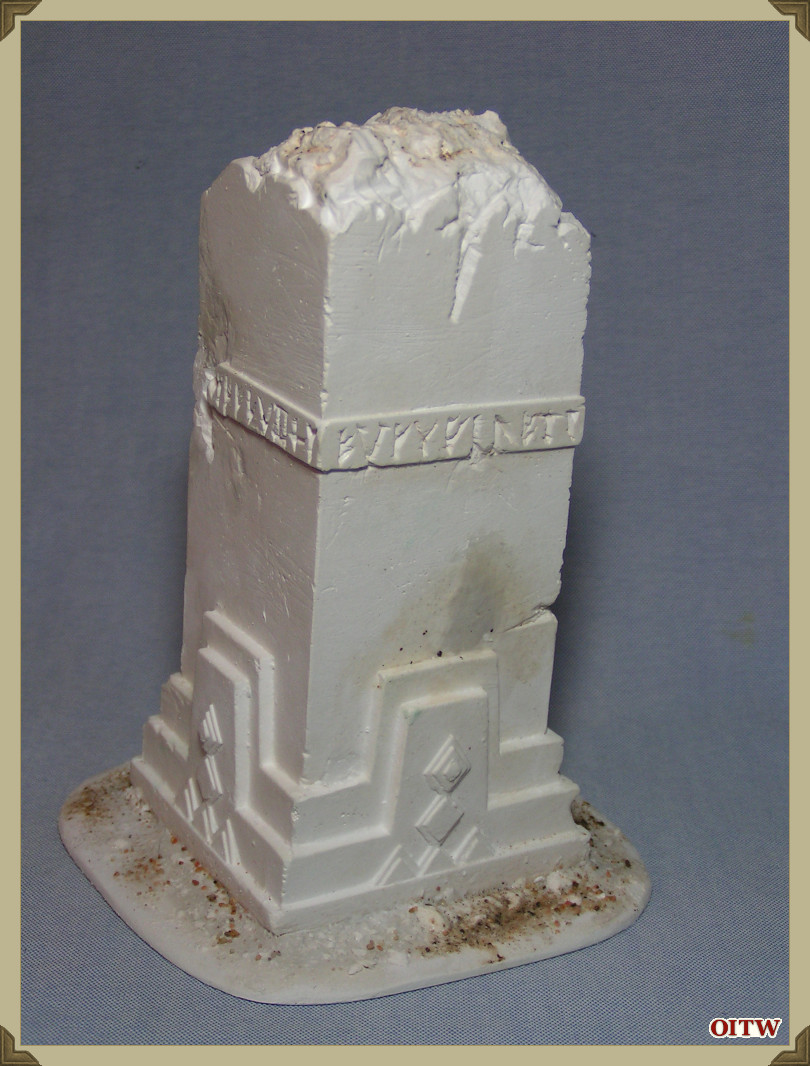 My first completed pillar model – the ruined pillar and Bunker. At a very late stage I added the tank turret that is based on, but not an exact copy of the FT17 cast turret. 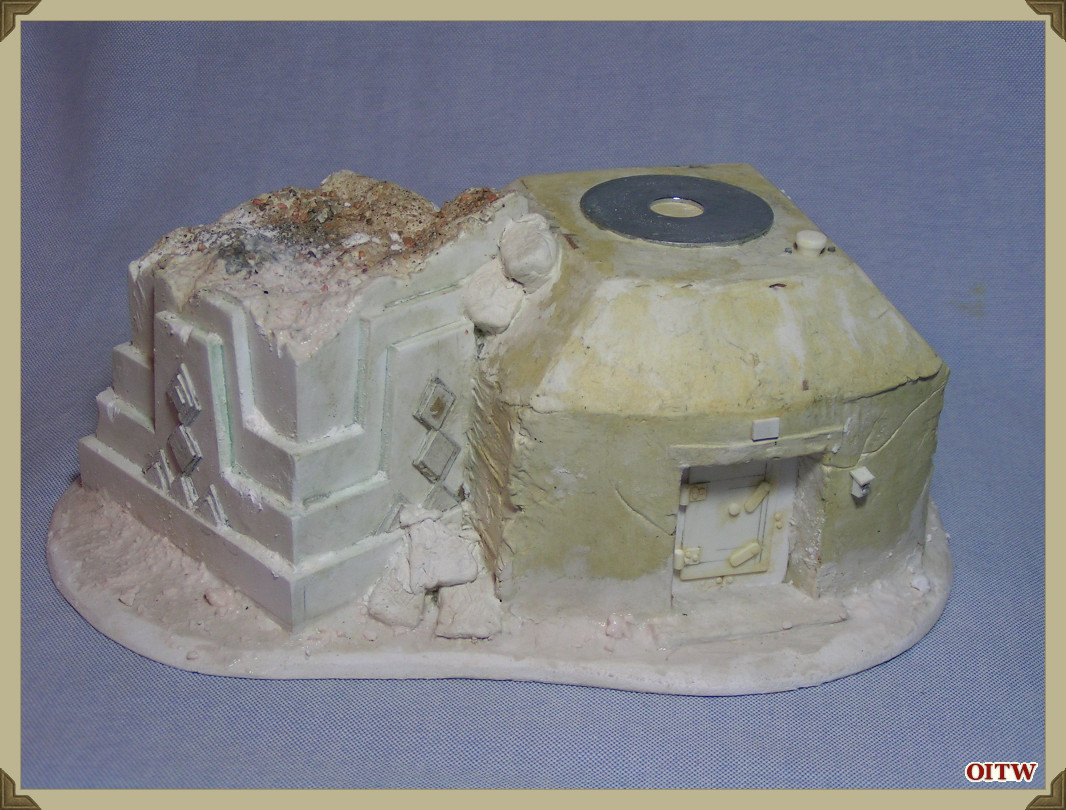 The next two models are ruined pillars, the Plaster of Paris pillars which have been aged and based. One interesting point about working with the Plaster of Paris is that I kept all of the ‘bits’ that were carved from the original, to use as rubble and ground cover. In fact I can confirm that the dust and rubble from these two towers or pillars is some of the best ground cover I have ever used. I apply it dry to the model base and then add ‘wet-water’ and uPVA glue to the dry mix –

Wet Water = water with a drop of washing up liquid added to break the surface tension of the water and allow the glue to flow better – I have it on very good authority that cheap washing up liquid are much better for this than the Brand Leading ones!

That just left the last pillar and rather than push ahead – I asked Rob what he would like me to do with this fourth plaster cast. I suggested three options 1 – leave as a complete pillar, 2 – another ruin or 3 - a building alongside. Rob suggested a wooden building alongside the pillar and this is what I have done 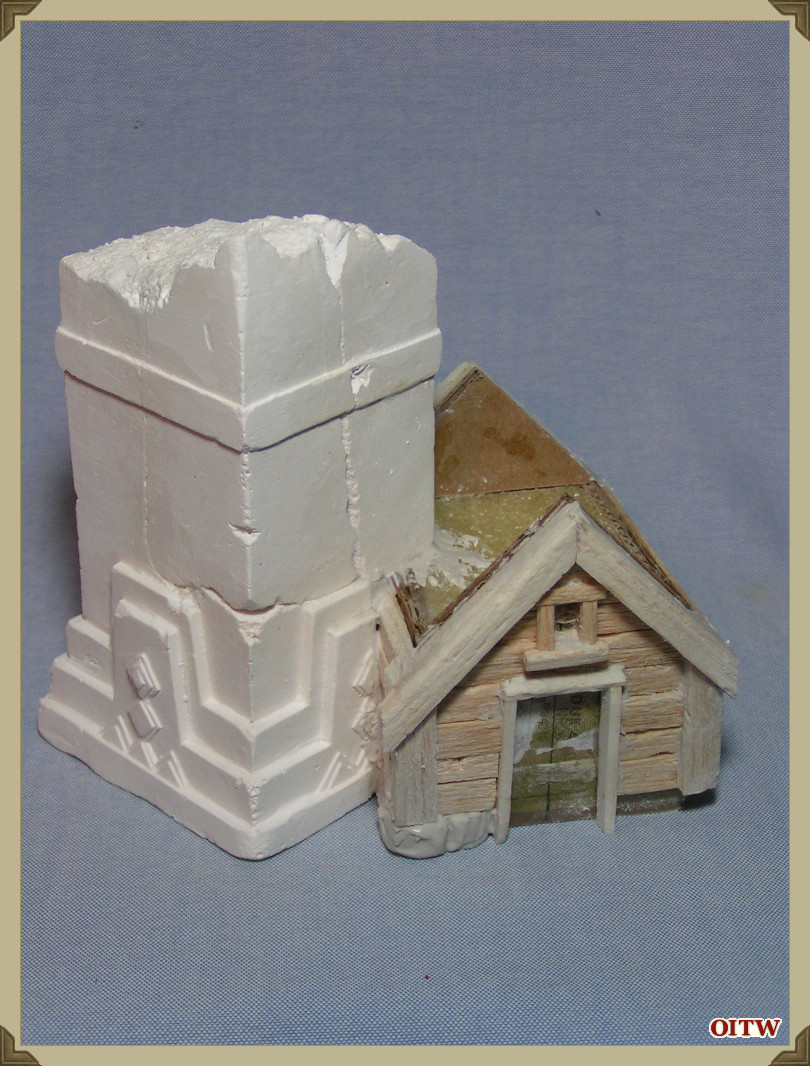 As I write there is still talk of at least one more commission, but with the Kickstarter coming to an end, I would expect this to have to wait until phase two.

When Craig asked for a Panzerfäuste article for this year’s Advent, I wasn’t sure that I had anything that would work. Craig twisted my arm and this is the result – I would hope that the background to how a commission is arranged and develops would be of interest. Finally, I should add that I had a great deal of fun working on this project – it pushed me to look at a subject matter that was in truth far outside my comfort zone. It’s been a blast – Thank you Rob and Good Luck with the Panzerfäuste Kickstarter.

To see the complete many and varied terrain article by Master Modelmaker Tony Harwood, along with his excellent Flintloque scenarios simply click on the  maroon tag  just below and to the left.