A S.P.Q.o.R.c. Showcase by Tony Harwood 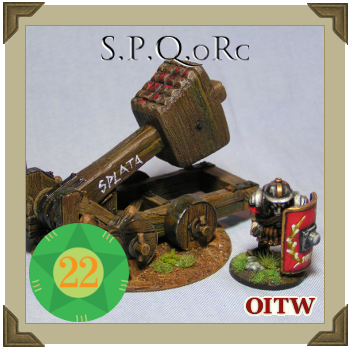 Master modelmaker Tony Harwood shows us a little something special from Maveryc's S.P.Q.o.R.c.

Lets’ be honest – Pax Bochemannica is not a serious wargame, Its’ a bit of fun and as such you should expect the unusual , after all Noman Orcs in segmented armour Vs. Hooligan Halflings in stripy pyjamas was never going to be mainstream!

Never-the-less it’s a game I just love – especially the miniatures (or in the case of the Orcs – not so miniature). When Rob Alderman asked if I was interested in sculpting a warmachine for a planned expansion, I said yes – actually I said something else – but let’s just say yes was the sentiment. I proceeded to scratch built a 1/56th scale Onager copied from an illustration in one of my Airfix Magazine Annuals. Rob has this cast up in resin and apparently it has been available at shows. Rob – I’m still waiting for an illustration on the Pax Boche site! And come to mention it – it still needs a crew.

But what about the Boche I hear you ask (well in the interests of fairness – you should be asking). So what would the Boche use as a warmachine?

Max Coxhead to the rescue. This illustration was sent to me and the creative juices started to flow. 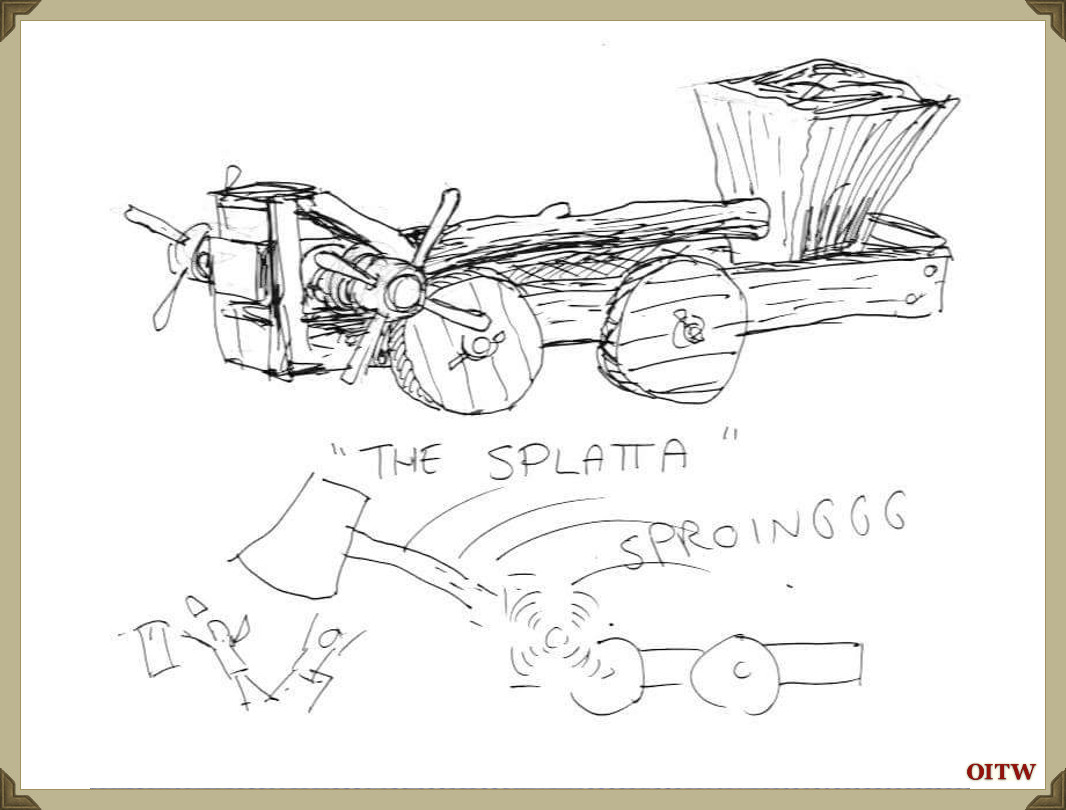 Here are some illustrations of the construction and as you can see – It is totally impractical as the recoil is the equivalent of a 12 foot long and 10 foot high .45 Magnum. “You feeling lucky, Punk.” 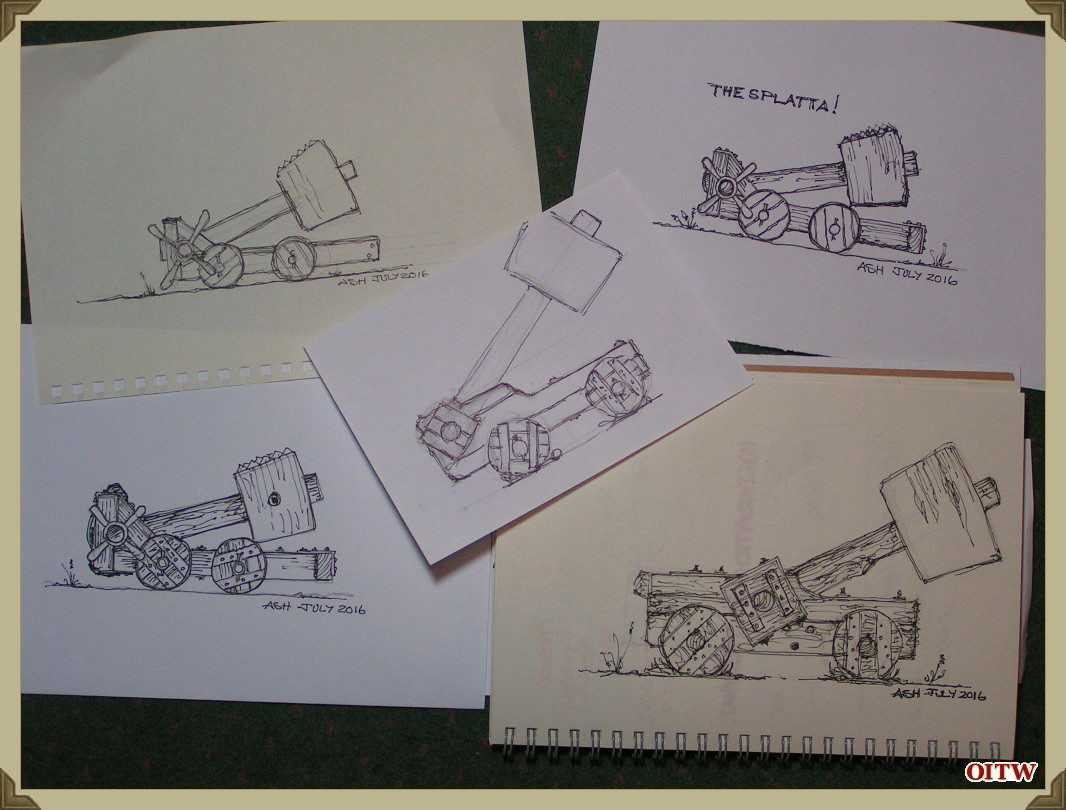 I played with a couple of ideas and The Splata MkII was born. 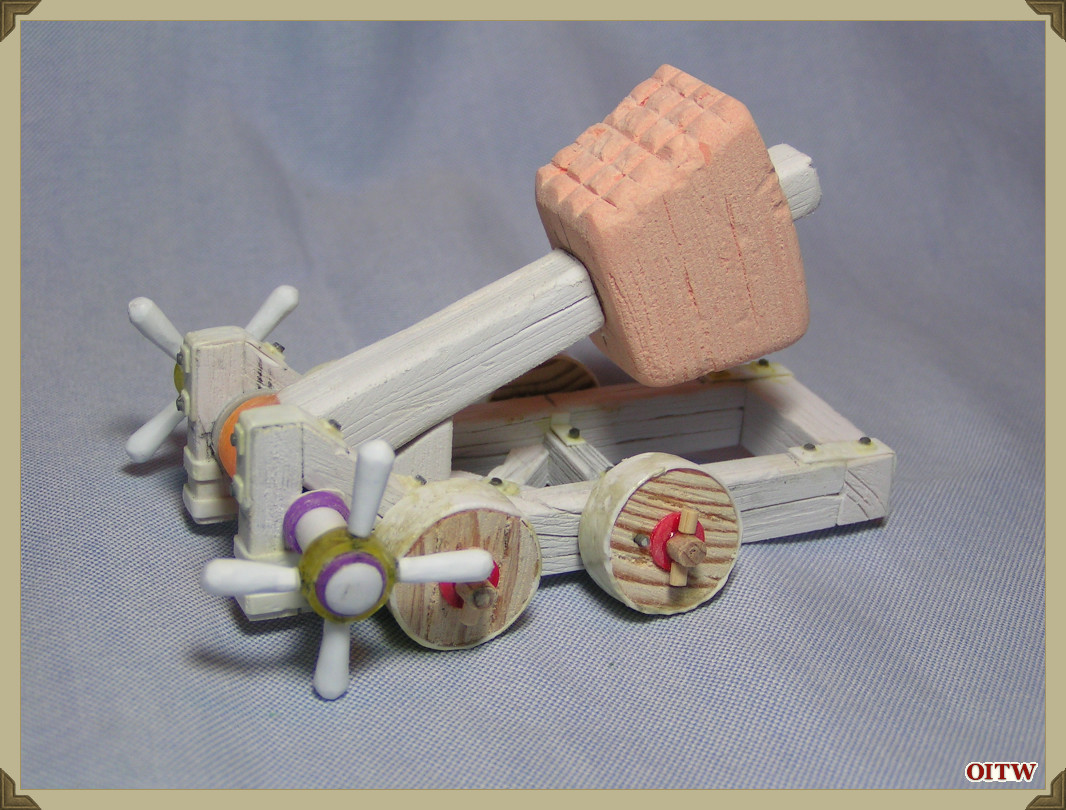 Once the model was cast in resin (I had one of the very first) I decided that not only was I going to build one, but I was going to build a working model...

The kit comes as four separate parts, the main body, two axles and a hammer and cogs sprue. 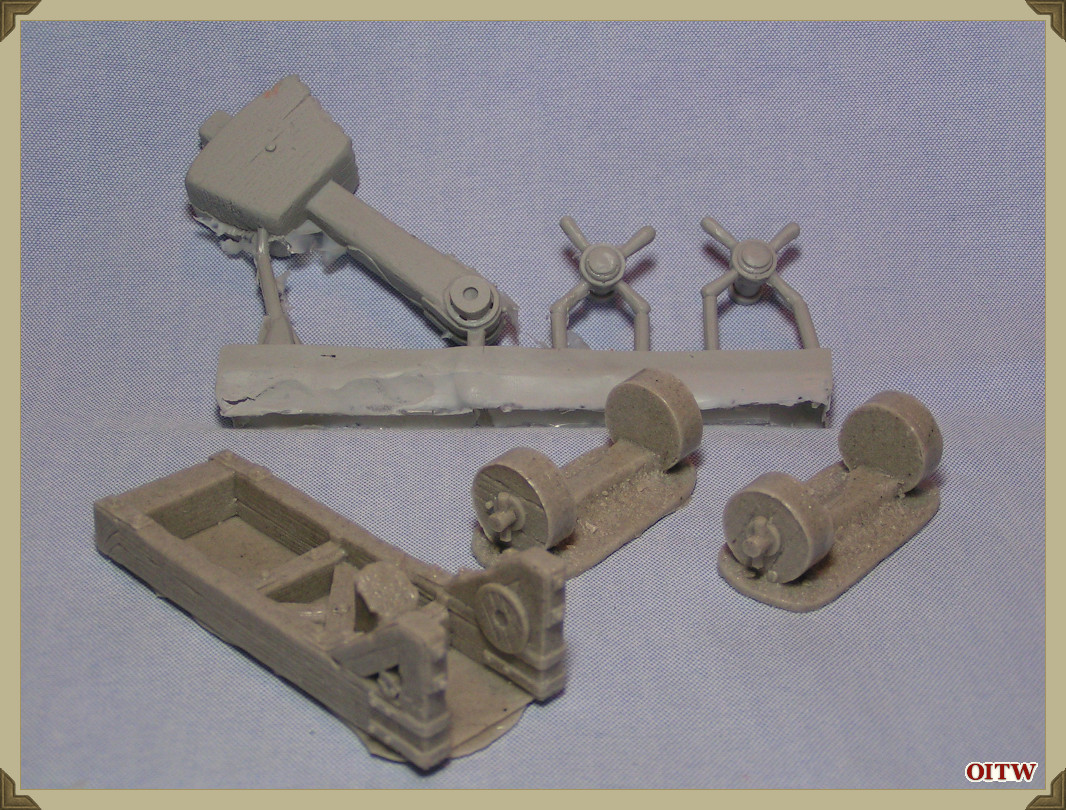 I trimmed off the casting sprues and sanded the parts with some abrasive paper. Then cut a length of stiff wire to act as an axle through the cogs, the front arms, and the hammer. 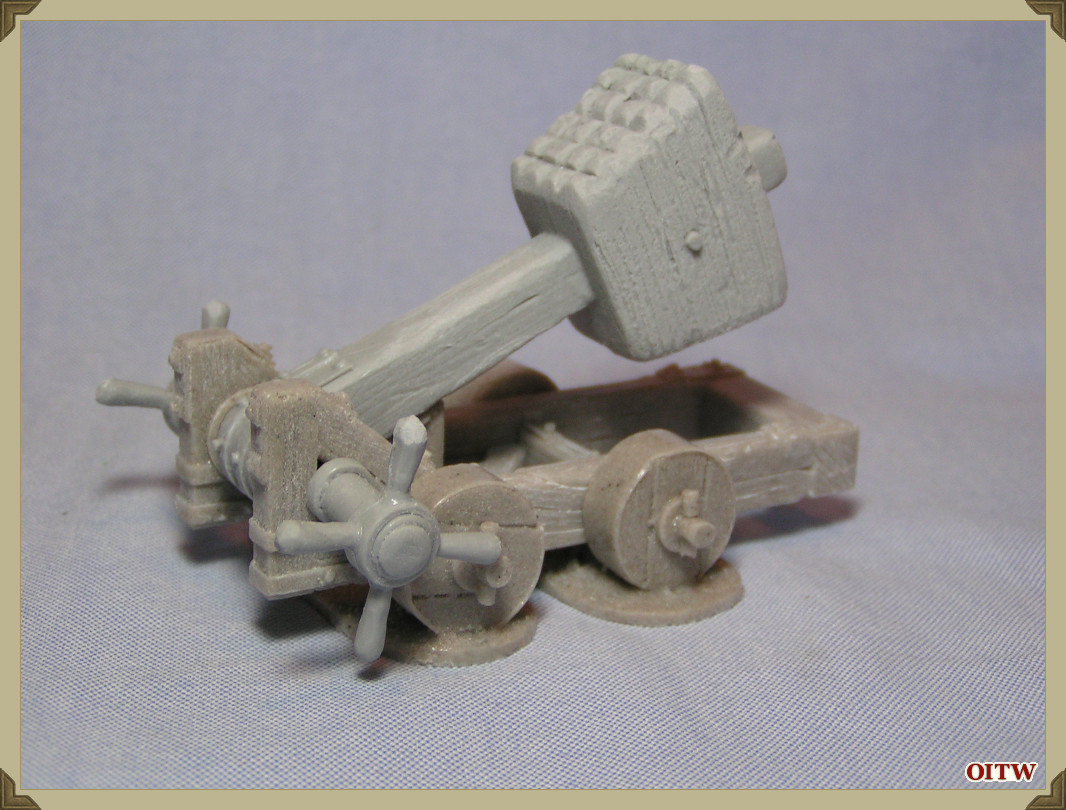 Once I was certain it would work. 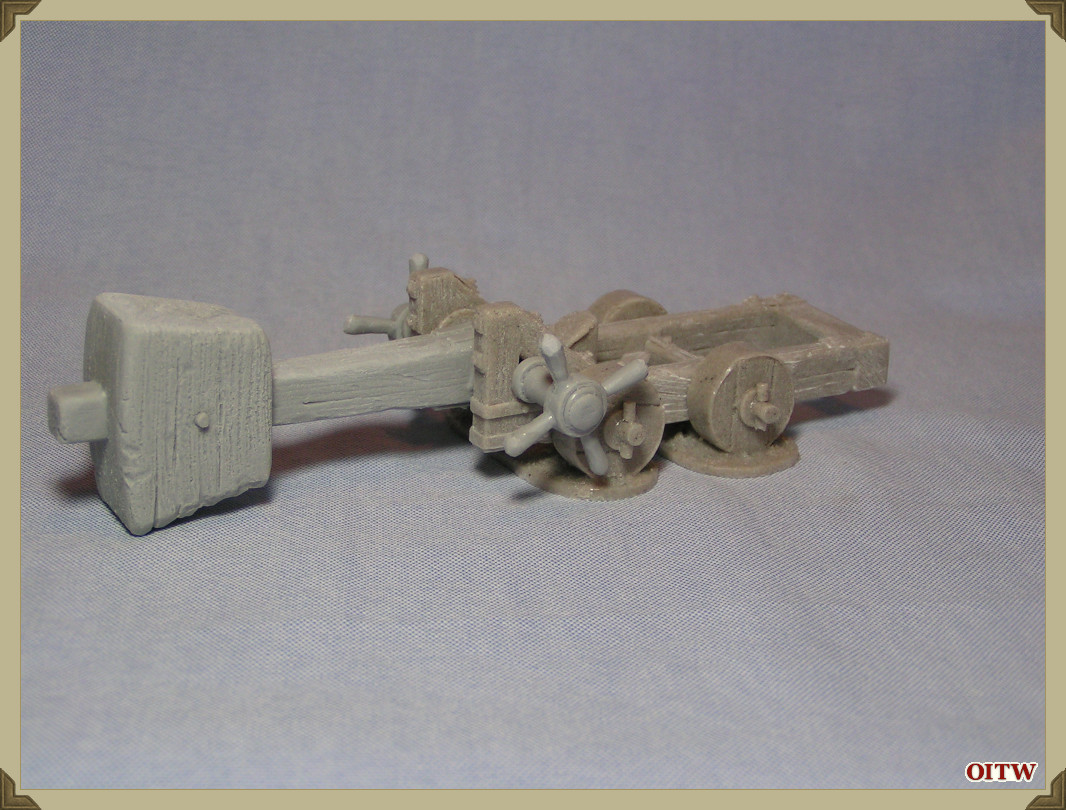 I mounted the two axles onto a disc of plastic card – I found that a disc of 72mm was just right and then built up the base with some Milliput. 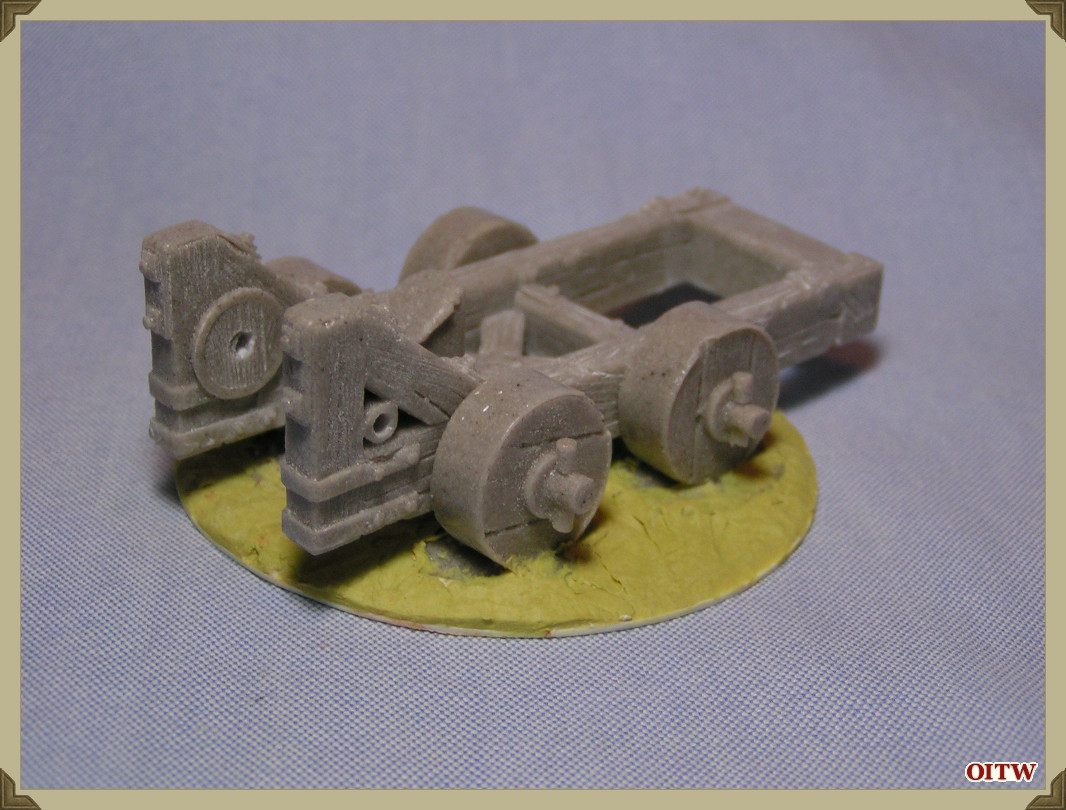 The base was textured with some sand. 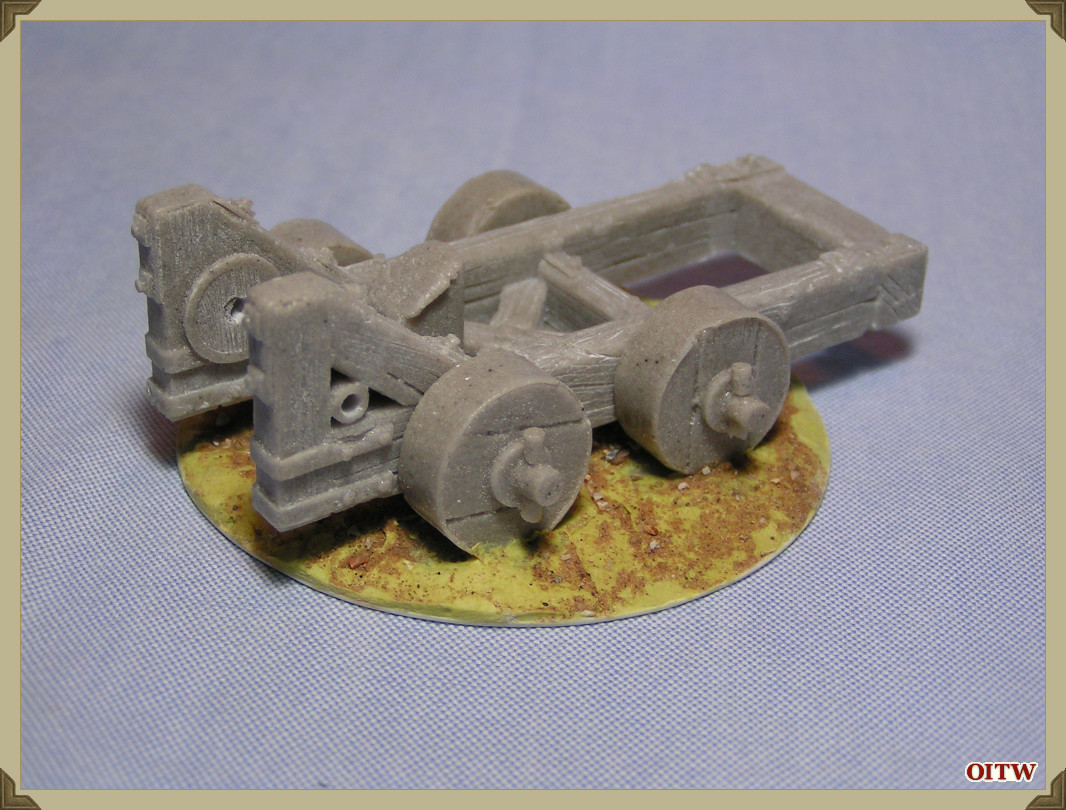 Then onto the painting. I used various acrylic paints to basecoat the model in a mid-brown. The metal wheels were picked out in silver and then everything was washed with a black/sepia mix. 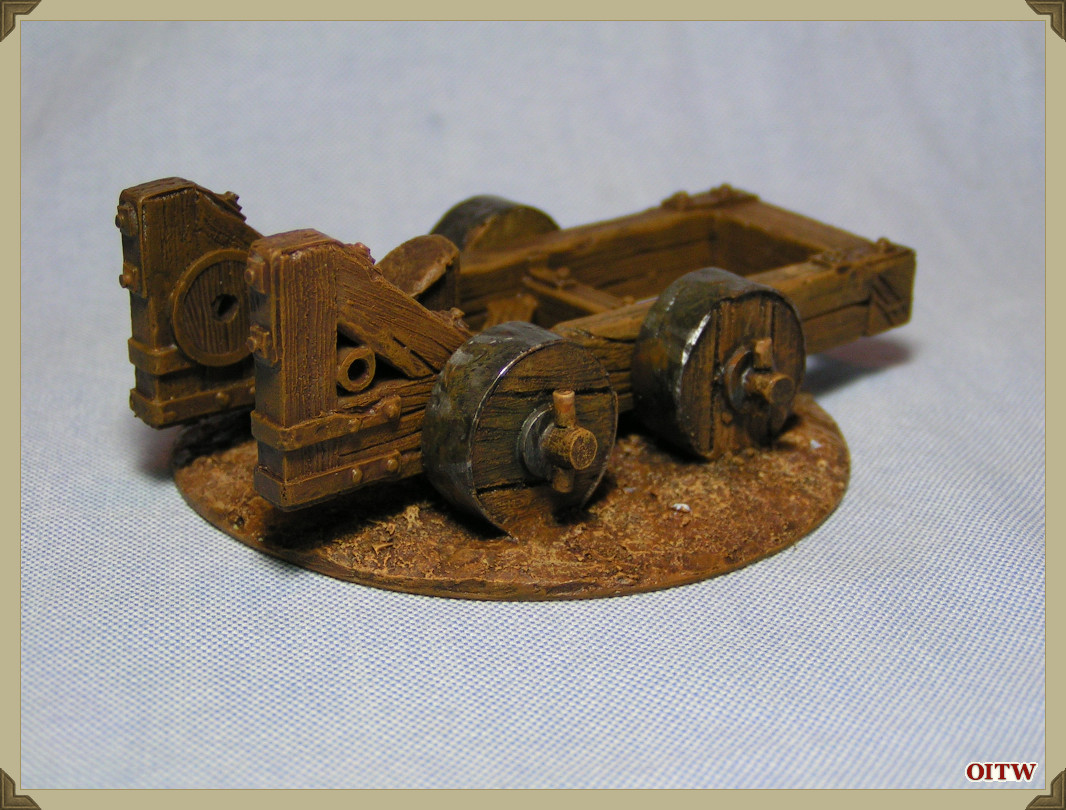 The cogs and the hammer were also undercoated in brown. 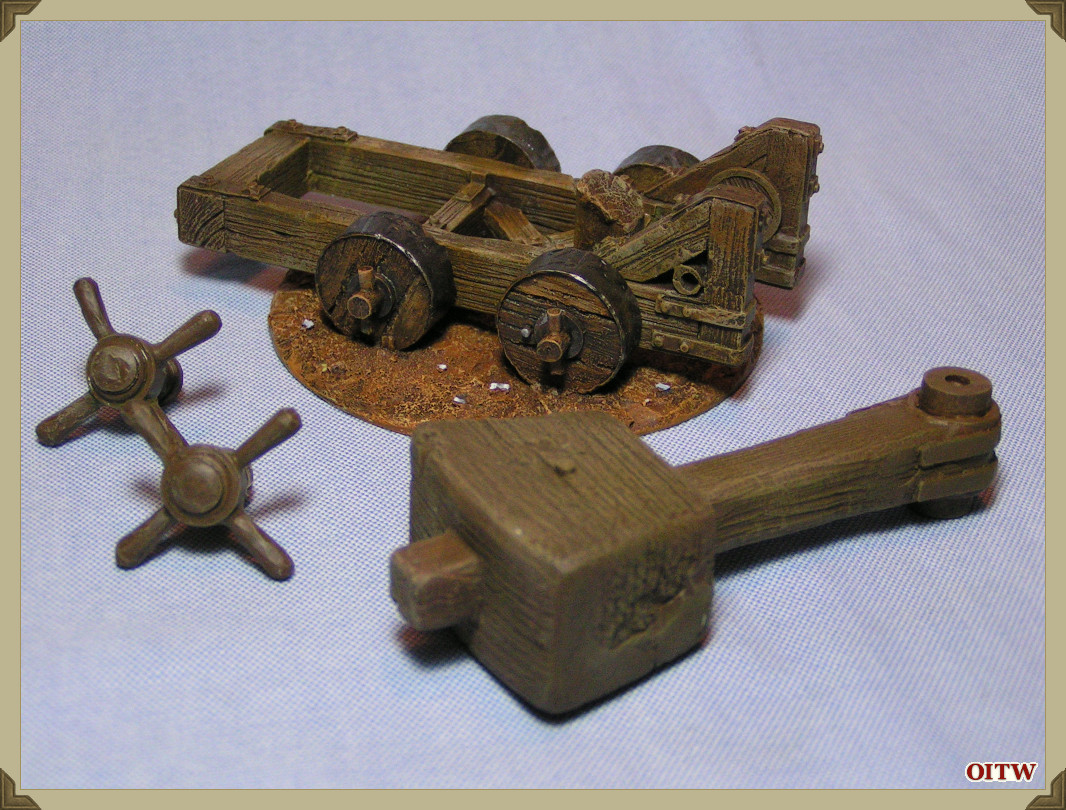 Then some more paint, washes and drybrushing... 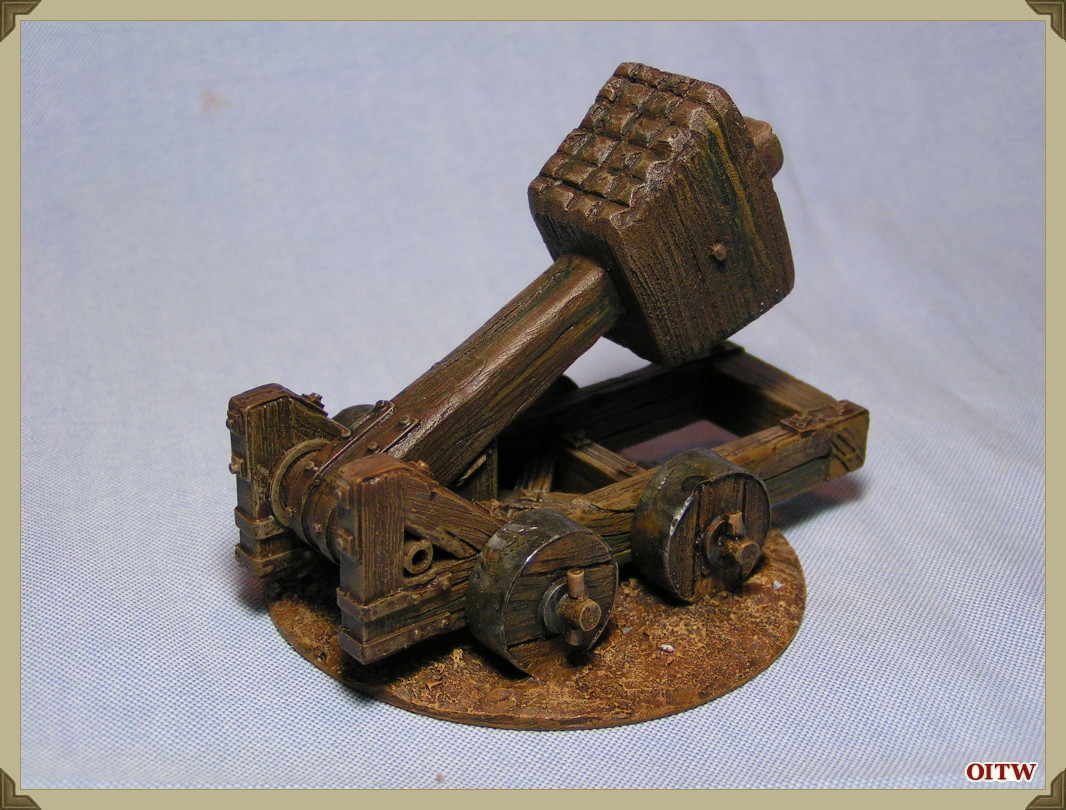 Detail painting didn’t take too long (there isn’t much to paint). 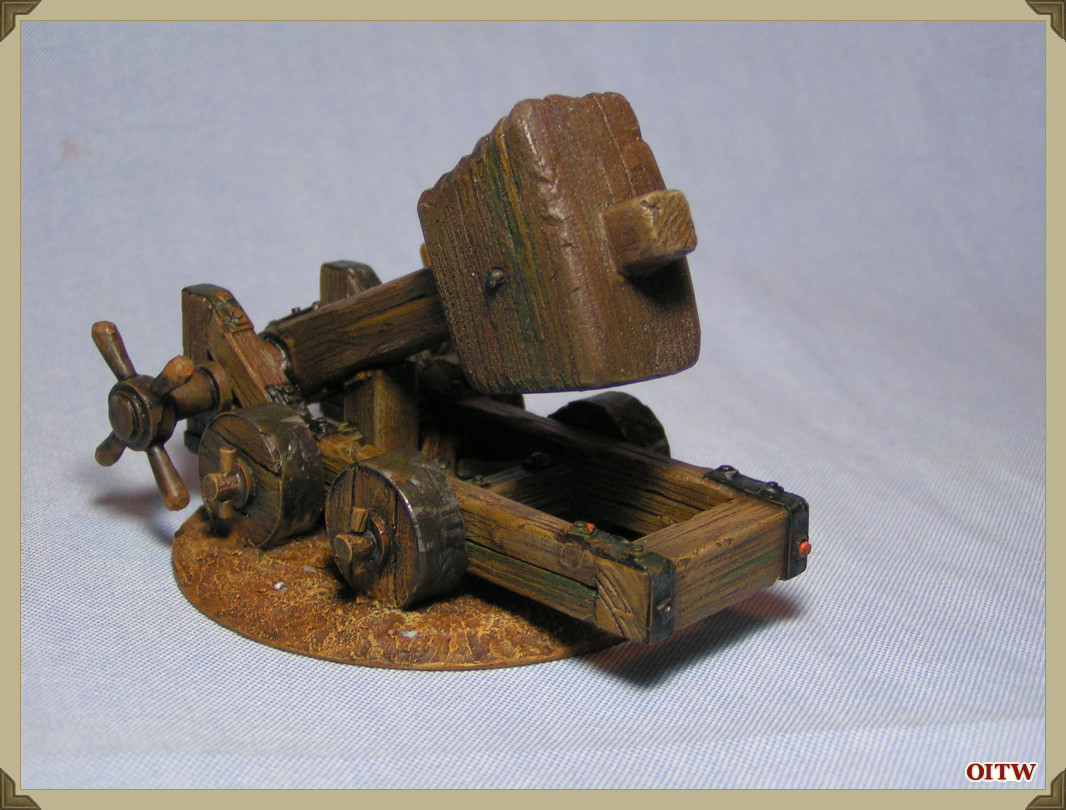 Once varnished with Galleria matt varnish, I superglued the metal rod in place (superglue on the cogs only so that the hammer can swing). 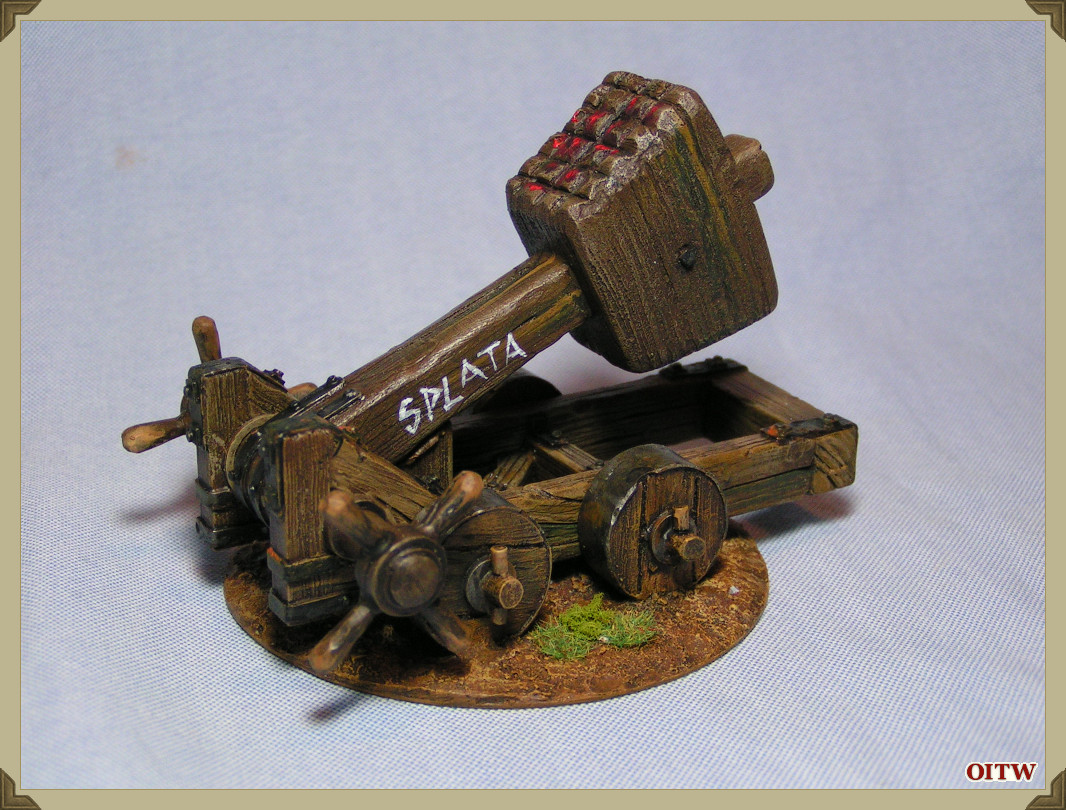 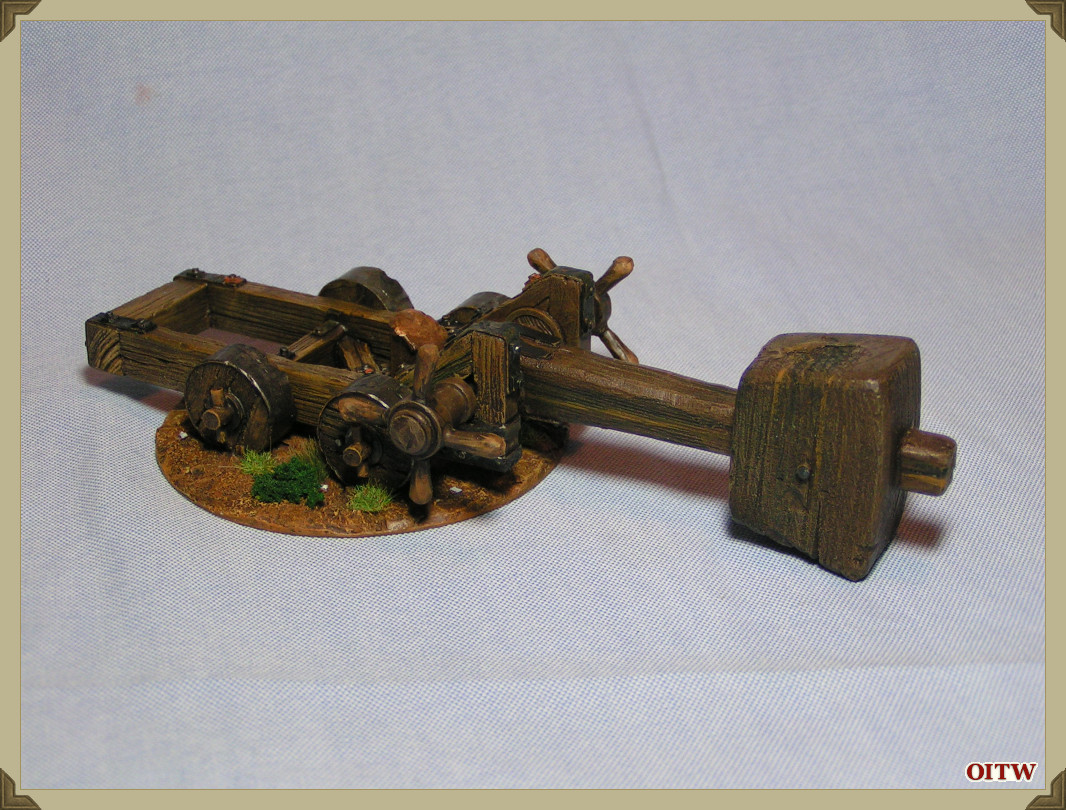 The base was decorated with static grass tufts and some ground foam – similar to my miniature Boche. The gory blood was a last minute addition, while the ‘go-faster’ SPLATA was painted with affine brush and a steady hand.

I present to you The Splata – if you pester Rob enough He might get around to sculpting a crew! 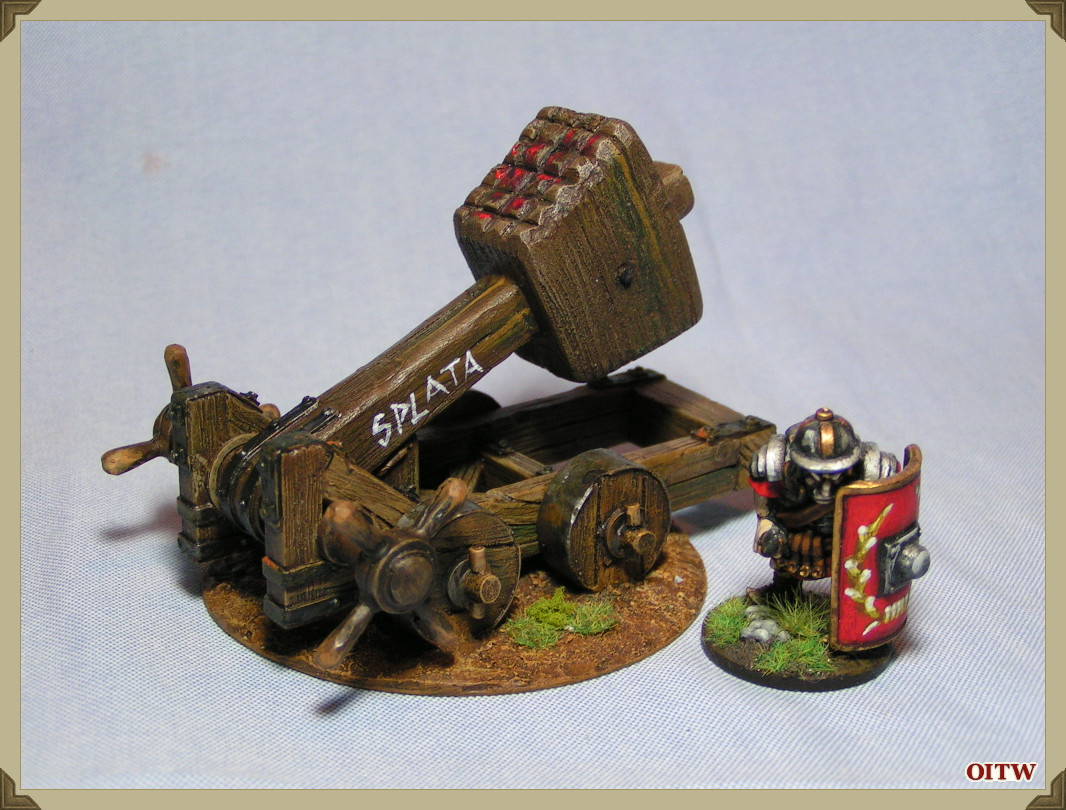 The Splatta will be released by Maveryc's UK distributor, Hysterical Games, at some point in the new year and I have been assured it will also come with crew :)

To see the complete many and varied terrain and painting articles by Master Modelmaker Tony Harwood, along with his excellent Flintloque scenarios simply click on the  maroon tag  just below and to the left.